Accessibility links
Waste Not, Want Not: Drink Beer To Feed Fish And Help Save The Planet : The Salt Industry trailblazers are trying to reduce the energy and resource costs of aquaculture. Possible solutions include using brewery waste, algae, insects or even carbon dioxide to feed the fish we eat. 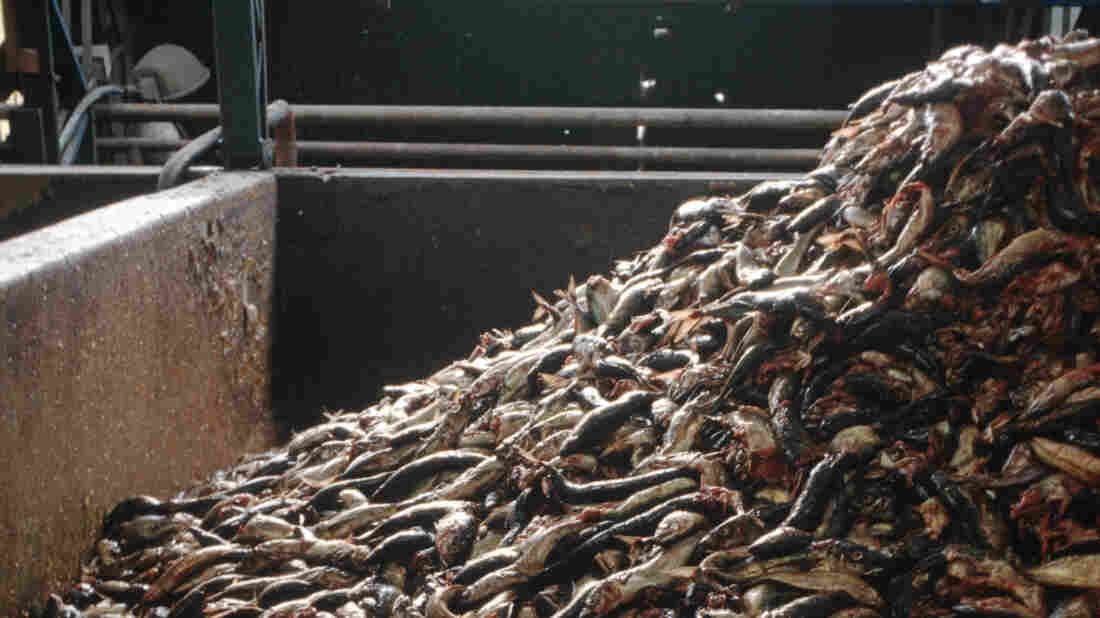 Forage fish like these at a Chilean processing plant are often used for fish meal used in aquaculture. But critics consider this inefficient and wasteful and worry it could deplete fish populations. Now several companies are developing protein substitutes to replace fish meal. Julio Etchart/ullstein bild via Getty Images hide caption 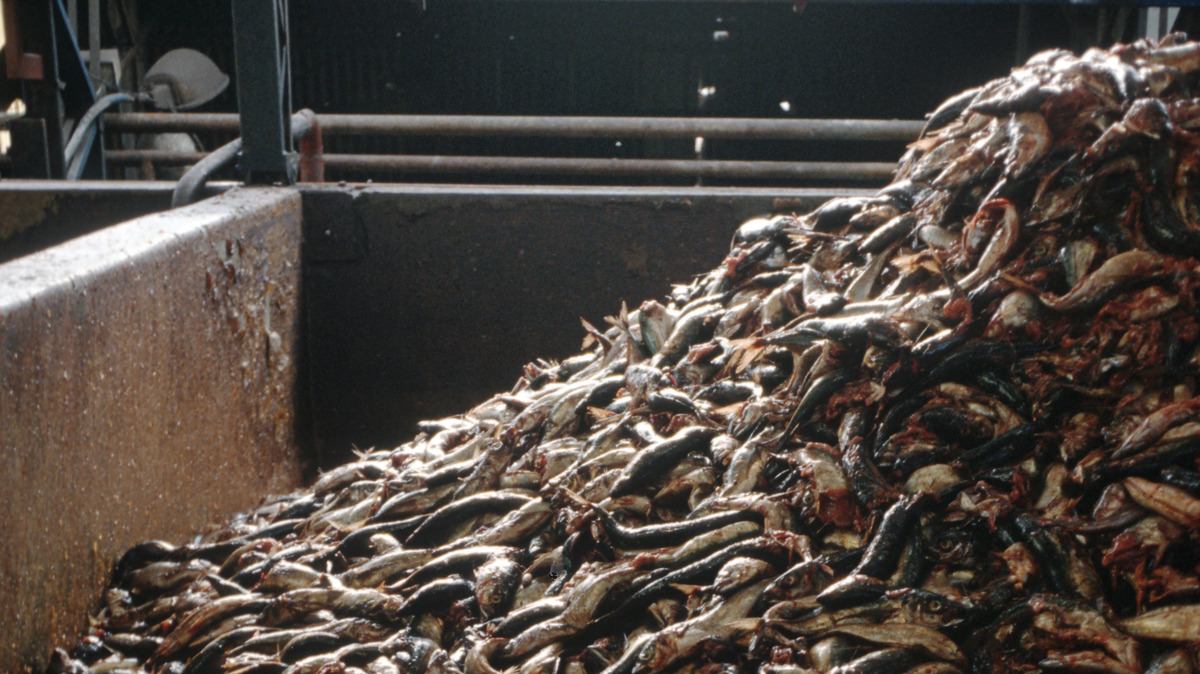 Forage fish like these at a Chilean processing plant are often used for fish meal used in aquaculture. But critics consider this inefficient and wasteful and worry it could deplete fish populations. Now several companies are developing protein substitutes to replace fish meal.

In Westfield, N.Y., perch, bass, catfish and trout are growing fat on the byproducts of an adjacent brewery and distillery. The fish, still young but intended to be harvested and eaten next year, are the first fruits of an innovative project aimed at turning waste into food while addressing a suite of problems associated with more conventional means of catching and farming seafood.

The operation is a partnership between TimberFish Technologies and Five & 20 Spirits and Brewing, both based in Westfield. The brewery and distillery generate between 750 and 1,000 gallons of wastewater and grain discards each day.

Mario Mazza, Five & 20's general manager, says a large brewery can incur six-figure annual costs in managing such volumes of waste. "This way, you're taking a byproduct that you were previously paying to get rid of and using it to produce something of value," he says.

The system takes the heaps of waste grain from Five & 20's distillery, as well as wastewater, and, just yards away in a system of plastic cubicles, composts the energy-rich material. This supports colonies of microbes and invertebrates, including worms and snails, which are in turn dispensed into the tanks of hungry fish. The plan, Mazza says, is to start serving the fish at the onsite restaurant, Bird, sometime in the spring. 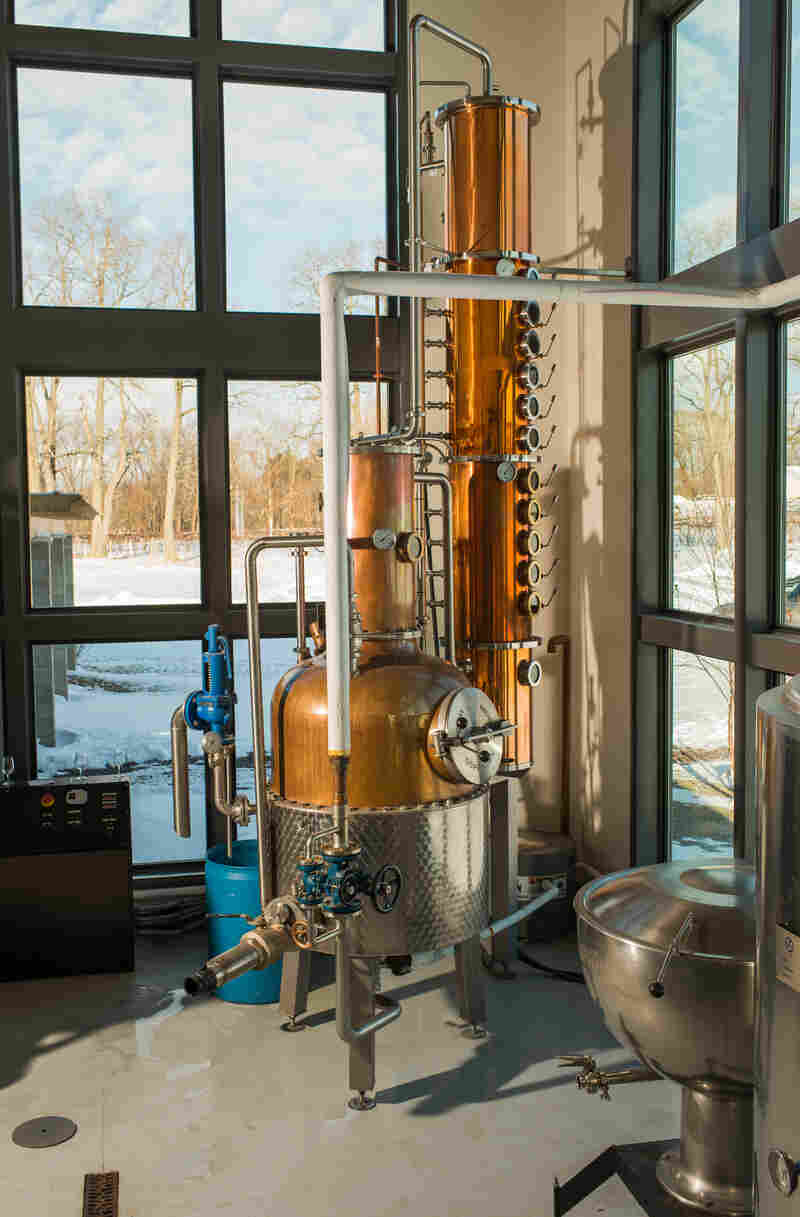 Five & 20 Spirits and Brewing has partnered with TimberFish Technologies to convert the wastewater and grain generated by the brewery and distillery into fish feed. Rob Frank /R Frank Photography hide caption 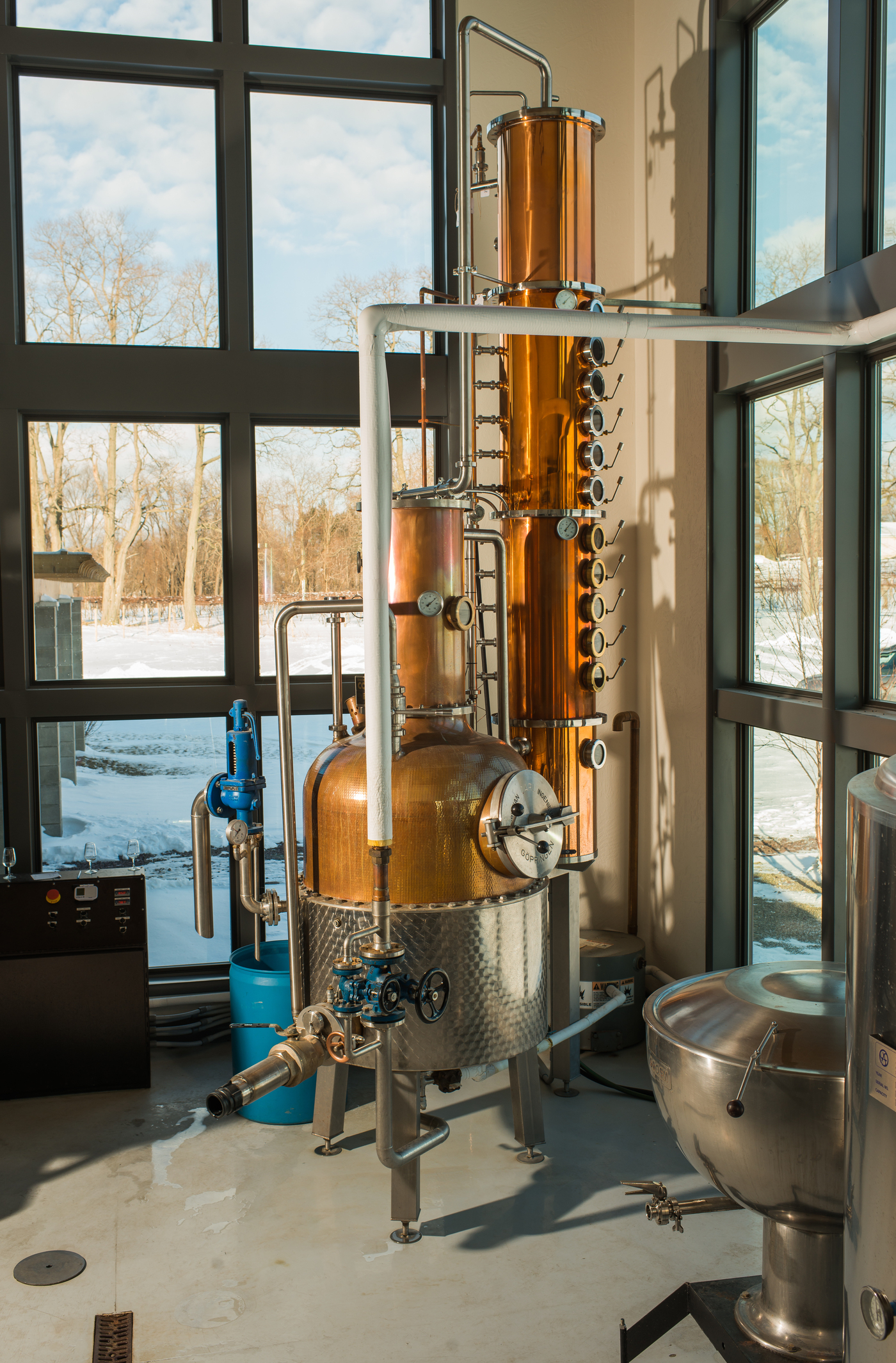 Five & 20 Spirits and Brewing has partnered with TimberFish Technologies to convert the wastewater and grain generated by the brewery and distillery into fish feed.

The TimberFish-Five & 20 collaboration is just one of many examples of how industry trailblazers are striving to reduce the energy and resource costs of aquaculture.

Conventional aquaculture systems rely heavily on wild fish, like anchovies and herring, that are fed to the captive fish, often in the form of fish meal or pellets. This system is fundamentally wasteful, because it can take large amounts of feed — often made from fish that people could be eating directly — to produce a small amount of marketable fish. For example, it takes up to 20 pounds of raw fish to grow 1 pound of cage-fattened bluefin tuna. Other species, including salmon, are more efficient at converting food into body mass, but growing them is still resource-intensive.

To address such inefficiencies, fish farmers are increasingly looking toward other feed sources, including algae and insects, to relieve pressure on depleted wild fisheries. McFarland Springs Trout Farm in northern California is raising rainbow trout on algae, discarded nut waste from local farms and flaxseed. KnipBio, in Lowell, Mass., is producing fish meal alternatives by growing microbes that convert ethanol, methanol and other waste energy into protein. Feedkind is a comparable protein-fat blend, now being produced by the fermentation of methane at a facility in Teesside, U.K.

NovoNutrients, in California's Silicon Valley, claims to have the means to turn millions of tons of carbon dioxide, captured at industrial smokestacks, into edible fish feed pellets every year. The idea: Use a microbial culture to convert a problematic greenhouse gas into a productive energy source. The process, applied at a large scale, could in theory help slow the concentration of carbon dioxide in our atmosphere, which the vast majority of scientists agree is causing the planet to warm rapidly, while also lessening the impacts of growing — and feeding — farmed fish.

Currently, NovoNutrients is producing a proprietary protein meal using carbon dioxide and hydrogen at a laboratory scale and is not approved for commercial production. Scaling up the process, explains the company's CEO, David Tze, would involve installing production equipment adjacent to large industrial facilities, from which the needed gas emissions would be piped in and exposed to the microbes.

Tze says the idea is to blend the powdery protein meal into industrial salmon feed and reduce the need for fish inputs.

"Our product will replace some or all of the 20 percent or so of aquafeed that is currently fish meal," Tze says.

And not only that, Tze says replacing fish meal by converting CO2 into protein actually cuts overall costs of feed production.

"The concept is incredibly appealing — turning a net negative into a net positive," says Trenor, also a restaurateur who has advocated for sustainable fisheries and food production for years.

But questions remain about marketability.

"They have a nice lab-scale proof of concept, but can they scale it up and make it commercially viable?" asks Kevin Fitzsimmons, a professor of environmental science at the University of Arizona who has studied aquaculture for four decades. He says "protein digestibility" of fish meal alternative products can be a potential problem. One common issue encountered in making experimental blends is "getting the amino acids way out of balance," which can make the protein very difficult for animals to efficiently process.

Fitzsimmons wants to see these products go successfully to market and the sooner the better.

"Forage fish stocks have been maxed out for decades," he says.

Research published in January revealed that most wild fish used as livestock or aquaculture feed is of food-grade quality.

"It would be much more efficient to eat these sardines and anchovies directly," says lead author Timothy Cashion, with the University of British Columbia. Cashion says he would like to see fish meal production veer away from using whole fish and, instead, process only unmarketable waste scraps that would otherwise be discarded.

Feeding farmed fish is an important logistical issue, though Trenor cautions that it's just one of many problem areas associated with industrial aquaculture; others include pollution, disease outbreaks and the escape of captive fish.

At Five & 20, the first crop of fish is still months away and is expected to weigh in at several thousand pounds. Jere Northrop, a managing member at TimberFish Technologies who has helped build the project, says the system could eventually be producing 2 million to 3 million pounds of fish per year.

He hopes others in related industries take note of the project.