Accessibility links
Black Farmers Are Sowing The Seeds Of Health And Empowerment : The Salt More than nine of 10 farm owners in the U.S. are white. A movement to change that is selling farming to people of color as a healthy lifestyle — and a way to fight discrimination. 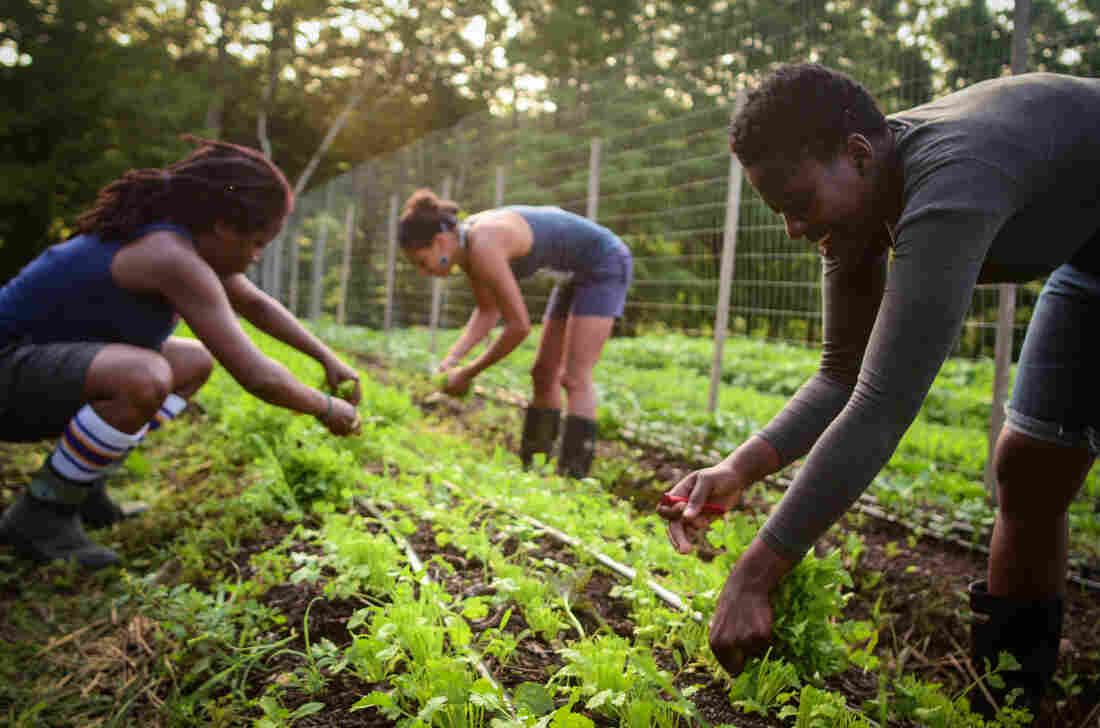 Farmers pick crops at Soul Fire Farm in New York state. It's run by Leah Penniman, a farmer and activist working to diversify the farming community and reconnect people to their food. Courtesy of Capers Rumph hide caption 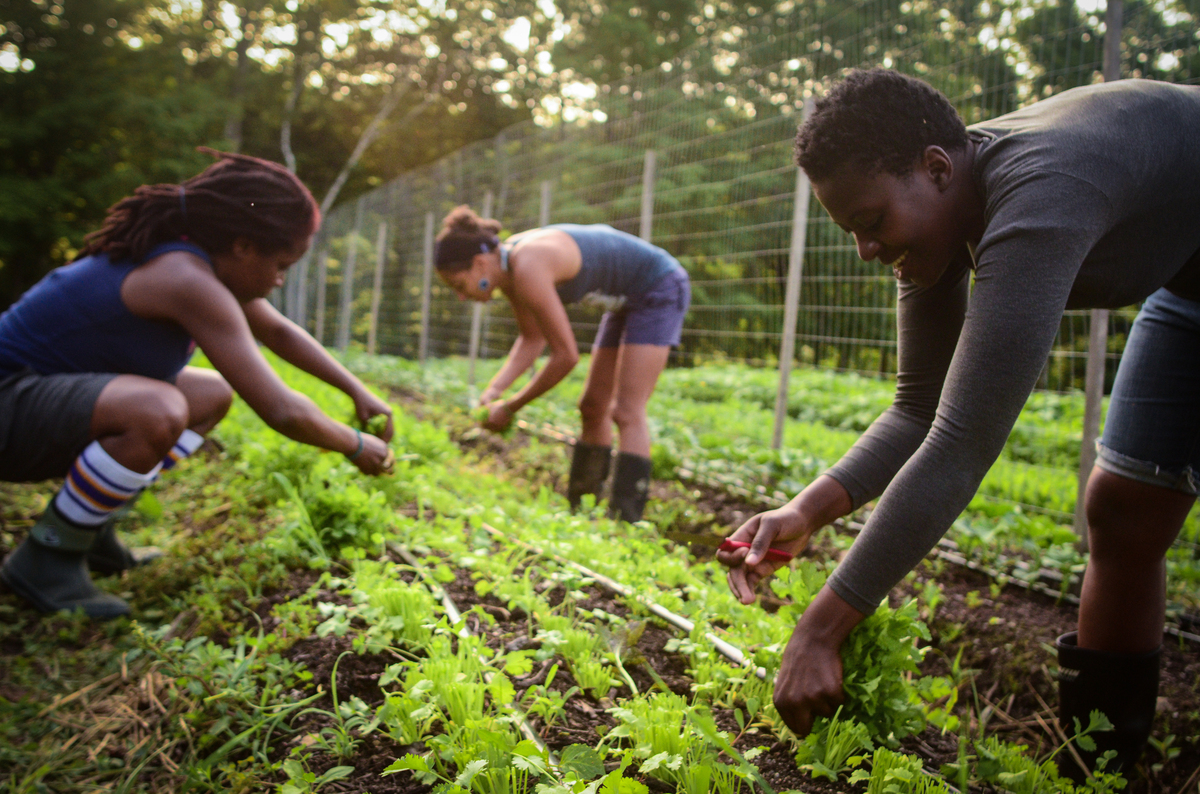 Farmers pick crops at Soul Fire Farm in New York state. It's run by Leah Penniman, a farmer and activist working to diversify the farming community and reconnect people to their food.

Chris Newman used to be a software engineering manager, well-paid, but he worked long hours, ate fast food and went to the doctor a lot.

Eventually, enough was enough. He and his wife moved from the Washington, D.C., area to Charlottesville, Va., to become farmers. Now he is healthier, has fewer stomach problems and can eat dairy products again. He raises pigs, ducks and chickens.

"Because I grow all this stuff, I tend to eat it. I don't eat at Popeyes anymore. I think it's disgusting. I used to love Popeyes," Newman says. "I have a really hard time eating bad meat. I'll eat a vegetarian dish at a restaurant if I didn't know where the meat's coming from."

For him, farming is about more than just his own health. Newman hopes to encourage more people of color to become farmers and push for sustainable farming practices so healthy food becomes accessible to those who can't afford it.

"It's not just about our happy damn chickens. This is about: How do we fix this system?" he says.

Newman says that when he switched careers, he realized how overwhelmingly white farming is in America — he felt alone as a person of color. "You go into Whole Foods around here, you don't see black people," he says. "You go to farmers markets, don't see that many black people. You go to farms, don't see any black people." Farming is more than 90 percent white — the second-whitest job in the United States, according to 2016 data from the Bureau of Labor Statistics. 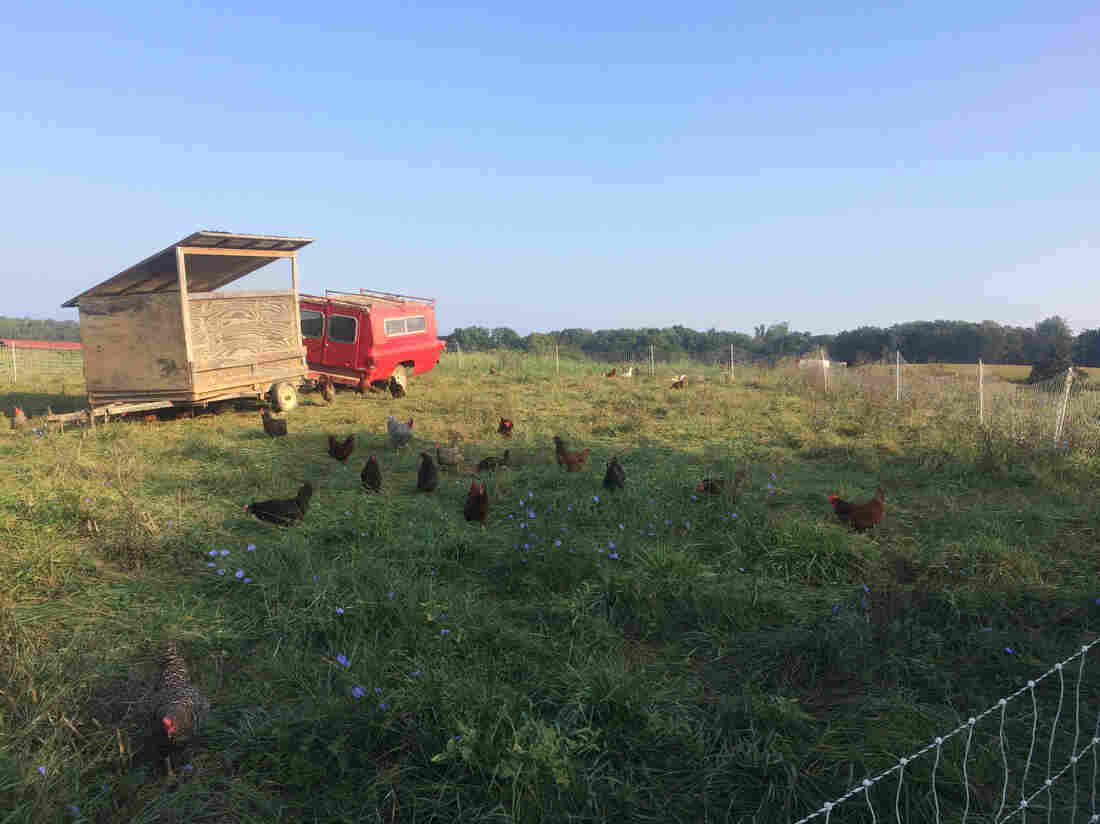 Chickens roam in their floorless pen on Chris Newman's farm. Newman quit his desk job to take up farming. He hopes to encourage more people of color to become farmers and push for sustainable farming practices, so healthy food becomes accessible to those who can't afford it. Alan Yu/WHYY hide caption 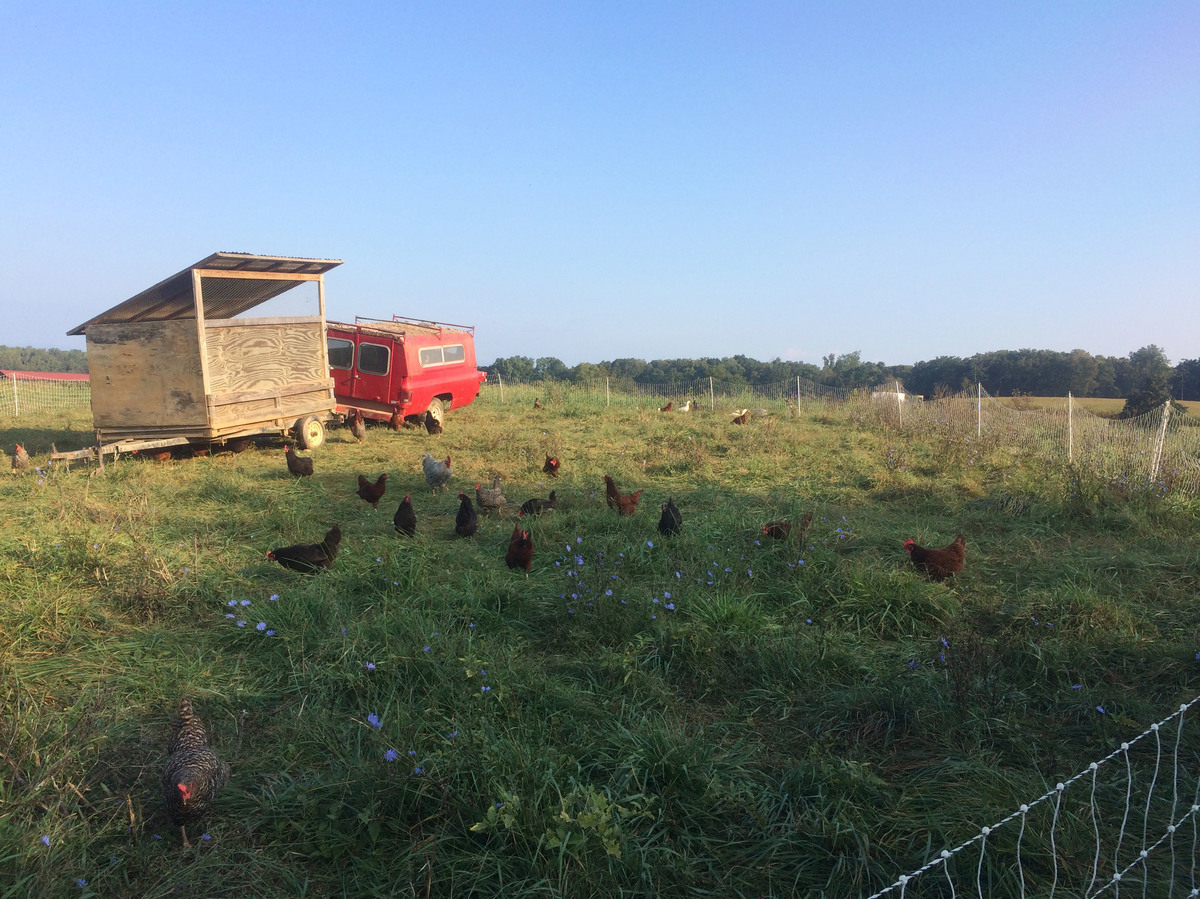 Chickens roam in their floorless pen on Chris Newman's farm. Newman quit his desk job to take up farming. He hopes to encourage more people of color to become farmers and push for sustainable farming practices, so healthy food becomes accessible to those who can't afford it.

Newman's chickens spend most of their lives in a large floorless pen where they can run around and forage for bugs in the grass, fertilizing the land with their waste. By design, his chickens do their business all over the field, which makes the Virginia soil more fertile.

"Animals have created this foundation where you can now, in that place, plant trees, plant crops, and they'll be healthy" without the use of chemical fertilizers, "because that soil is so healthy," Newman says.

But growing food that way is also expensive; his eggs sell for $5 a dozen.

"That is a huge thing that bothers me about what we do. ... A lot of my family, a lot of the people I grew up with — they can't afford this stuff," Newman says. "If it's $10 a pound, it may as well be a million dollars a pound. What has to happen in order for this to be accessible to everyone is way bigger than me, is way bigger than this farm, way bigger than all the farms in central Virginia or the mid-Atlantic or anywhere else."

He wants a lot more people like him to grow food using these methods. Maybe it's a business, or maybe it's a hobby in a backyard or community garden so they can make money on the side.

Specifically, he wants to help more people of color get involved in farming, so they can feel the same connection to the land and health transformation that he has experienced.

African-Americans are 1.5 times as likely to be obese as white people, and they eat fewer vegetables than other racial groups.

To get more people of color interested in farming, Newman says, you first have to show them it's a viable career. But there is a more complicated, entrenched problem — one that the vast majority of farmers don't have, because they're white.

A couple years ago, he was driving past a rich neighborhood. He pulled his pickup truck over to the side of the road to eat his lunch.

"This lady like jogs by, and she gives me this look, and every black man in America knows that look ... it's a mix of fear and incongruence, like, 'You don't belong, something's wrong,' " he says. "And as soon as she ran by and gave me that look, I'm like, 'The cops are going to be here in less than five minutes.' And lo and behold, five minutes later, here comes a cop — this is not part of your beat; this is not where cops drive — slows down, looks at me, doesn't quite stop, because again I know how to disarm white people. First thing you do is smile, you act like you own the place — you act white. [You] change your voice, to where you code switch, and you become a lot more articulate, you talk like kind of an intellectual. And smile, always smile."

That was not the only time that someone called the police on Newman. It has happened while he was working the fields and when he was delivering food. Now he avoids those things.

Newman is working to address the lack of diversity among farmers by hiring interns, focusing on women, people of color and others from underrepresented communities.

"It's about recognizing that there are barriers there for them that there aren't for other people and that we need that lift, because the world is not our oyster," he says.

Farming as a political act

Leah Penniman is also working to diversify the farming community and reconnect people to their food. She is a farmer and activist at Soul Fire Farm on the eastern side of New York state.

A year after she started her farm, Penniman started getting calls mostly from black women across the country who told her, "I just need to hear your voice and to know that I'm not alone and to know that it's possible to be a farmer."

In addition to farming, she runs a training program to teach black and Latino people basic farming skills. Demand is booming. She can train 120 people a year, and she has another 100 to 200 people on the waiting list for next year's program. And for the black farmers whom she knows, farming is not only a business — it's also a tool for social justice.

Penniman sells produce to about 260 people in her New York community. As part of her mission, she accepts food stamps and has developed a system where she can still make money while supporting 15 percent of her customer base — even if some can't pay in any given week.

Customers who can afford to pay more essentially help support those who don't have the budget. She says her low-income clients get a full box of vegetables each week no matter what.

"Many people say if it weren't for that, they would just be eating boiled pasta, because that's the most calories for the least money," she says.

Newman says his farm just broke even, so now they can focus on expanding. He would like to help more people of color benefit from that and change the food system while they're doing it.

"Looking out here, it's the perfect metaphor," he says. "There's nothing but green fields ahead of us. There's just this open-ended economic opportunity that's just waiting for people to come back to the land."

Alan Yu reports for WHYY's health and science show, The Pulse. This story originally appeared on an episode of its podcast called Politics on Your Plate.