Accessibility links
Smør Bullar: The Classic Danish Christmas Cookie (That No One Has Heard of) : The Salt For one writer, the small, buttery Danish cookie her Scandinavian-American family made during Christmas was the taste of the holidays. Turns out, the classic Danish cookie may not be Danish after all. 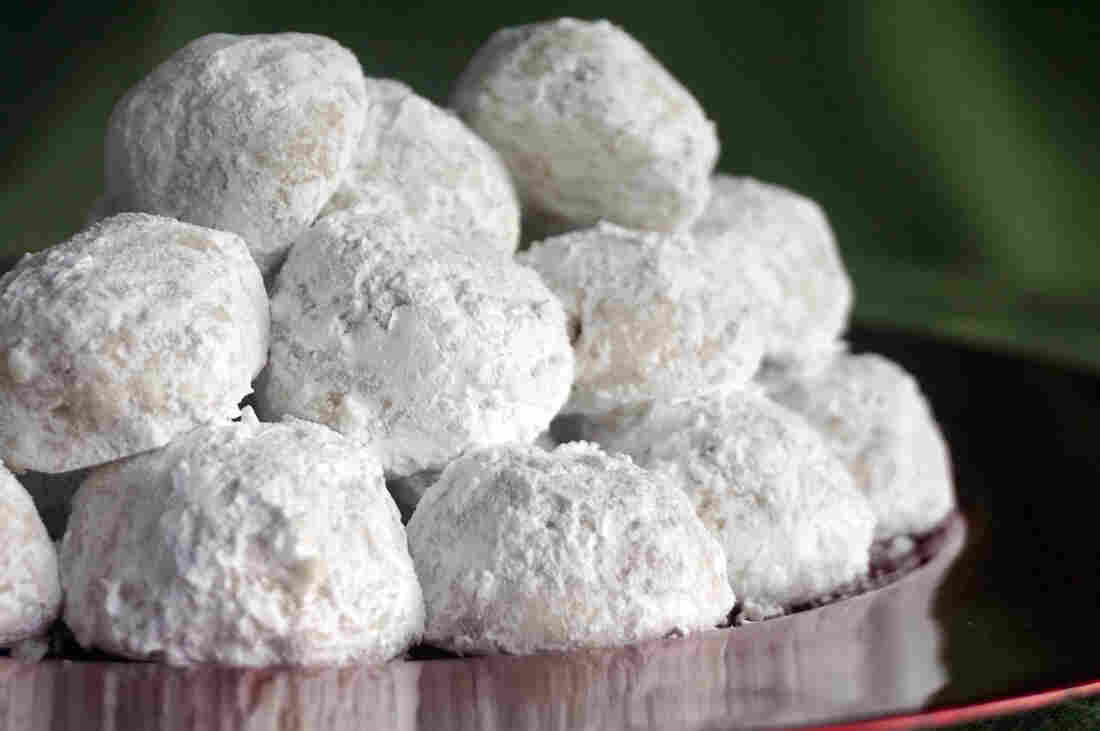 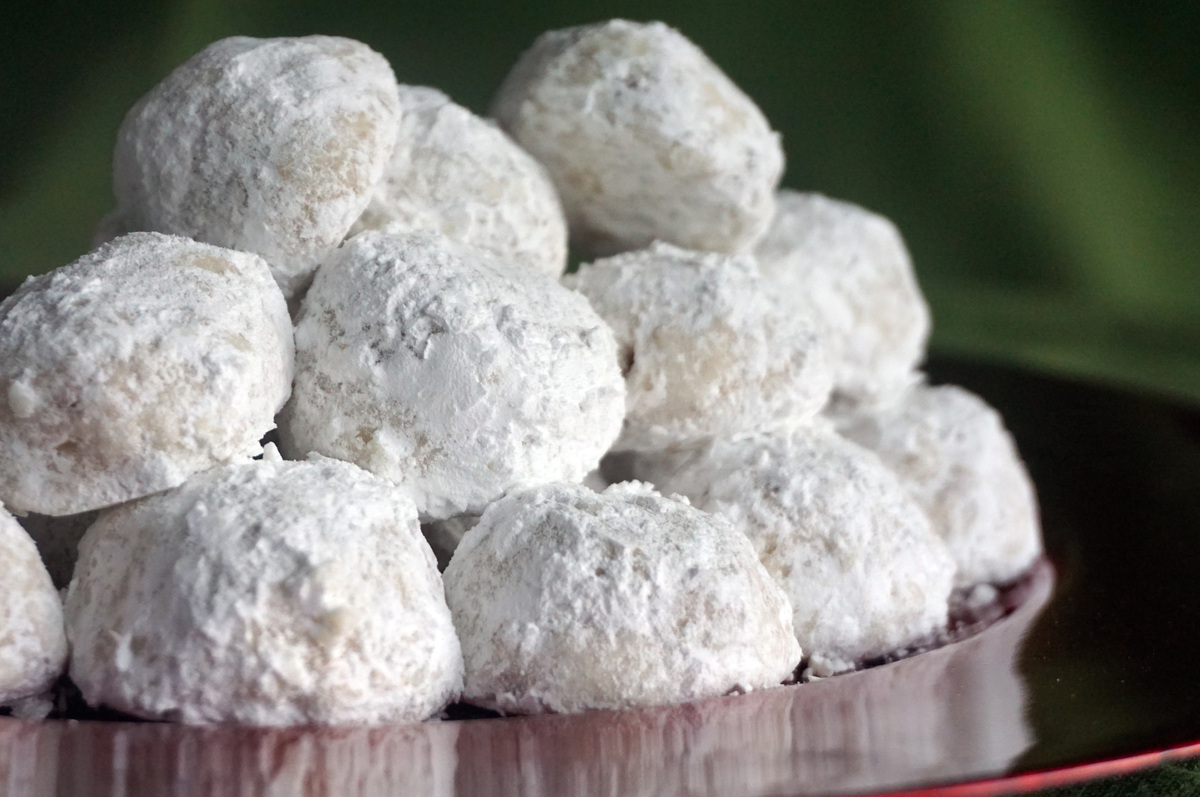 My mother's side of the family is half Danish and my father's side half Norwegian. But at Christmastime, we feel 100 percent Scandinavian. Largely ignoring the English and Scottish bits of our heritage, we fill our Christmas table with treats such as crumbly Danish cookies and piquant pickled herring.

My favorite of all the Danish desserts is smør bullar. Small spheres of butter, flour, powdered sugar and nuts, dusted with more powdered sugar for good measure, these cookies are the flavor of Christmas for everyone in my extended family.

Round, white and powdery — can it be a coincidence that the way my Scandinavian-American relatives pronounce (mis-pronounce, surely) the name, it even sounds like "snowball(er)?"

To me, their very shape evokes winter. I remember feeling confused as a kid, and even a little disappointed, when my mother explained that smør was Danish for butter and the literal translation was 'butter balls'. Today, however, it seems logical to me that a Danish cookie would be called butter ball. Danes are famous farmers, with a history of dairy farming that dates back to the Viking days.

It's #ScandiWeek On The Salt!

Scandinavia is a land of cold winters and heart-warming (literally) Christmas food and drink traditions. This year, The Salt is celebrating the stories behind those traditions. So God jul! Glædelig jul! Hyvää joulua!

With its fertile farmland and many waters, Washington State's Skagit Valley drew many rural Scandinavian immigrants in the late 1800s, including my own great-great-grandparents who, naturally, kept cows and opened a creamery.

My mother's family continues to follow the Danish tradition of a special meal and present-opening on Christmas Eve. So every year, on Dec. 24, we trek north from Seattle to a family gathering at my aunt's house in the Skagit Valley. After the Christmas dinner, the table is cleared and reset with large bowls of lemon or rice pudding and tiered trays of cookies that always, always include smør bullar.

Learning to make smør bullar is a rite of passage for the women in my family. My mother first made it as a teenager, when my Grandma Ruth became ill and the household duties passed to her as the eldest daughter.

When I attempted my first batch, I was in my twenties, living far from home and feeling nostalgic. The dough had seemed like a powdery mess, so I added a teaspoon of water. And then another. Soon it came together and I had perfectly formed balls that baked up beautifully — into cookies that were stone hard. Instead of a cookie that crumbled in my mouth, my tooth nearly did.

My cousin, Dawn Neale, has taken on the mantle of family baker for my generation. As soon as I saw her on Christmas Eve that year, I rushed to her and detailed my disaster. 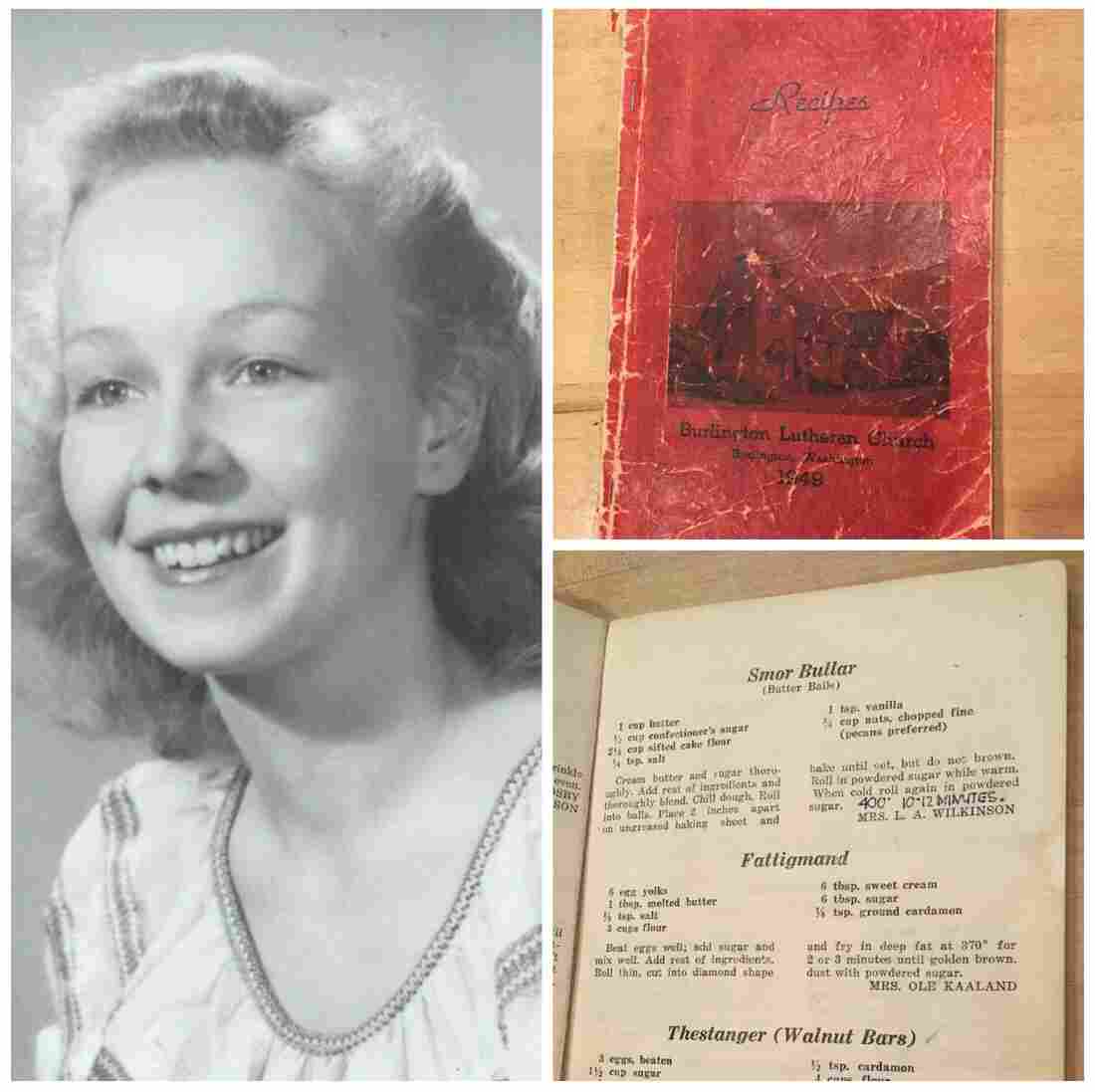 The author's grandmother, Ruth Wilkinson, and the 1949 church cookbook where the family recipe appears. Amy Robertson for NPR hide caption

"What do you think could have happened?" I asked.

"Never add water. As you form the dough into balls, the warmth of your hands will soften the butter just enough to make the dough stick together," Dawn explained.

Now, imagine my surprise when I recently discovered that "smør bullar" in modern-day Scandinavia aren't cookies at all, but pinwheel bread rolls. (And it turns out that the word bullar actually means 'buns' in Swedish, and doesn't seem to exist in Danish). My Danish friends told me they've never seen such a cookie.

Determined to track down the true origins of my favorite Christmas cookie, I decided to turn to Trine Hahnemann, Danish chef and author of several cookbooks, including Scandinavian Christmas. Like any proper food historian, she asked to see the original recipe. I wished I had some recipe on yellowing paper, hand-written in Danish by my great-great-grandmother, but the closest thing I had was the recipe submitted by my grandmother to her church cookbook back in 1949. I sent Hahnemann the recipe via email.

"I have looked into the matter, and I have not been able to find a cookie recipe with that name, but a lot of recipes are similar. Like vanilla cookies, Finnish bread cookies, and many more, the base of many of the cookies is butter, flavor and nuts, which we in Denmark call småkager, meaning small cakes," Hahnemann responded. So, was my cookie not Danish after all?

Plenty of other cultures have something similar, all called cakes: Mexican Wedding Cakes, Russian Teacakes and Greek kourambiedes are variations, made with walnuts or almonds, a hint of cinnamon or brandy. Did my Danish great-grandmother borrow a recipe from another immigrant to the Skagit Valley and make it her own?

I did find similar recipes online that called cookies like mine "Danish wedding cookies." My mother and her sisters all agreed that in addition to Christmas, smør bullar was on the table at wedding receptions and fiftieth wedding anniversary celebrations, "special occasions where you would have special Scandinavian cookies," my mother said. Only if your special occasion took place in the winter though. Summer brides were simply out of luck when it came to smør bullar.

This year, I'll be in Italy for the holidays, visiting my in-laws, so no smør bullar for me on Christmas Eve. To make up for it, my mother and I baked up a batch last week while she was visiting me. We may not know if smør bullar are truly Danish. But they will remain a true Christmas tradition for this Danish-American family.

Update 12/19/2017: Since we first published this story, we've heard from readers of similar recipes in their families. In addition to the Finnish, Greek, Mexican and Russian versions mentioned above, readers have told us about their families' "Italian Wedding Cakes," "German Snowballs," "Butter Balls," "Sugar Balls," "Pecan Dreams" and more; many of them can trace the recipe back generations. The "real" origin of the cookie? We may never know.

Cream butter and sugar thoroughly. Add flour, salt, vanilla and pecans, and mix well. Cover dough and chill for half an hour.

Form dough into small balls* (about 1-inch diameter), and place 2 inches apart on an ungreased baking sheet. Bake until set, but do not brown (8-10 minutes). Allow to cool for 3 minutes before removing from baking sheet, then roll in the additional powdered sugar. When completely cool, roll again in powdered sugar.

*Remember my cousin Dawn's advice here. If the dough seems too powdery, never, ever add water. Just work the dough in your hands until it comes together.