Accessibility links
American Distillers Go Big Making Once-Obscure Aquavit : The Salt A once obscure spirit unless you have Scandinavian heritage, new and old-style aquavit is exploding on the American craft liquor scene. Maybe the secret's in the spices.

After Scandinavian Spirit Shortage, American Distillers Give Aquavit A Shot

After Scandinavian Spirit Shortage, American Distillers Give Aquavit A Shot 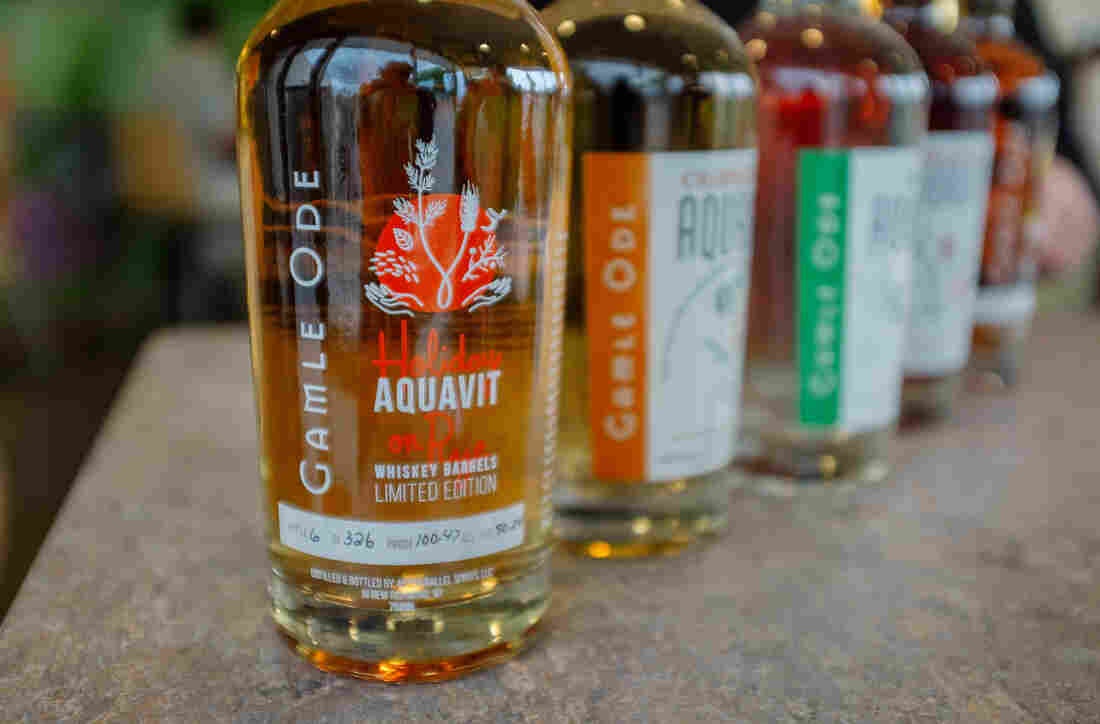 Aquavit has become a way for distilleries and bartenders to make a name for themselves in an increasingly saturated market. Rebecca Dilley hide caption 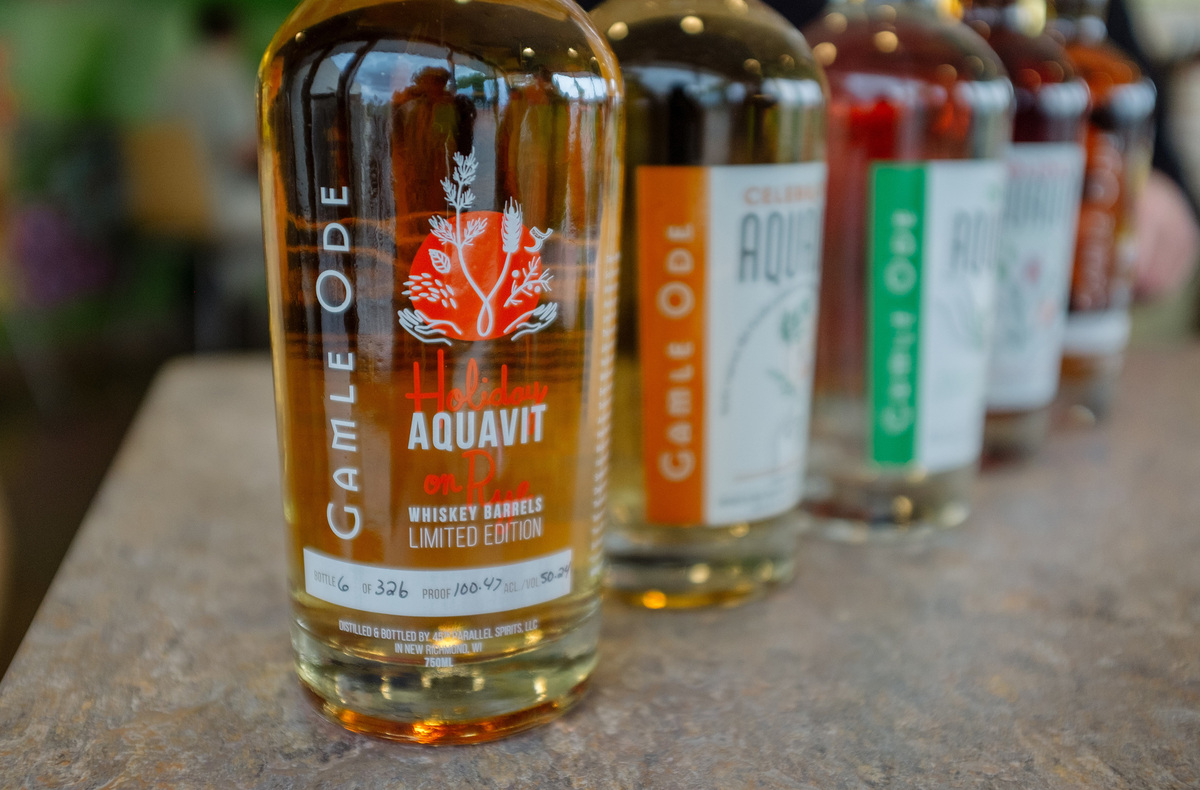 Aquavit has become a way for distilleries and bartenders to make a name for themselves in an increasingly saturated market.

In the winter of 2006, the unthinkable happened. There was a shortage of aquavit, the Scandinavian spirit that's flavored with caraway and other botanicals like dill and anise. For Scandinavian-Americans who relied on aquavit to accompany the traditional julbord, or holiday buffet, it was a tragedy.

"It threw me into a bit of a panic," says Christian Krogstad, Norwegian co-founder of Portland, Ore. distillery House Spirits. "The most important part for me about the holidays is the food." There's pickled herring, smoked meats, sometimes the traditional gelatinous whitefish preparation known as lutefisk and many other strong flavors that combine on the Scandinavian Christmas dinner table. "They really require aquavit as an accompaniment," Krogstad says.

So he set out to make his own, initially only for personal consumption. When bartenders came to visit over the following months, Krogstad would pull out a bottle of aquavit and give them a taste. "They were really captivated by it," he recalls. Their interest made him decide to bottle and sell what he'd always thought of as a niche spirit.

It's #ScandiWeek On The Salt!

Scandinavia is a land of cold winters and heart-warming (literally) Christmas food and drink traditions. This year, The Salt is celebrating the stories behind those traditions. So God jul! Glædelig jul! Hyvää joulua!

House Spirits — then just two years old — was one of the first American distilleries to make aquavit. In the last few years the once-niche spirit has become a way for distilleries and bartenders to make a name for themselves in an increasingly saturated market.

When Devil's Head Distilling in Colorado opened in 2015, aquavit was one of the first spirits they made. Often new distilleries release a gin and vodka for their first spirits since neither require aging but co-founder Ryan White thought aquavit would be a more interesting addition. Devil's Head was the first to produce it in the state, and found that having one unique spirit opened doors for them. "When we go out to distribute it, the aquavit is the thing that gets us the buyer's ear," White says.

At Christmas, The Swedish Smörgåsbord Redefines Over The Top

Traditionally, Scandinavians drink aquavit neat — throwing back one shot after another throughout the meal. But the bartenders Krogstad connected with immediately realized its potential as a cocktail ingredient. It found its way into Bloody Marys, gimlets, and, once aged-aquavits started being released, Negronis.

Get Into The Holiday Spirit With Scandinavian Glogg

"I'm constantly surprised by it," Krogstad says of aquavit's growth in popularity. "It's become not just a Scandinavian or Scandinavian-American thing. It's now a cocktail thing, and that opens it up to a much larger audience."

Kyle Van Strien, co-founder of Michigan's Long Road Distilling, also realized its potential. "If we're going to survive in the market with a lot of great booze, we've gotta do things different," says. Though aquavit isn't Long Road's top seller, thanks to the spirit's success at beverage competitions as well as its uniqueness among the whiskeys, gins, and vodkas most distilleries are producing, it's become the spirit for which they are known.

In 2012, there were fewer than 10 American aquavits, says Jacob Grier, the founder of Aquavit Week which involves events and cocktail specials that feature the spirit in 11 states. Five years later, Grier says there are more than 50 American varieties, and they are not just limited to traditional Scandinavian-American communities.

Grier attributes some of the growth to an increasing interest in Nordic cuisine, the sudden boom in Americans traveling to Iceland, and restaurants like Noma.

Before Americans started making their own aquavit, options were limited. As Emily Vikre of Minnesota's Vikre Distilling recalls, "There were two aquavits imported to the United States and they were rarely seen and probably only bought by Scandinavians celebrating one of our important holidays." (As Van Strien describes it, "It was a thing you drank twice a year and got blackout drunk with.") Now, the growth of American aquavit is prompting Scandinavian bartenders and distillers to give the spirit another, less-hangover prone, chance.

A year ago, Norwegian spirits supplier Arcus announced Lysholm No5, an aquavit specifically designed for use in cocktails. Krogstad says he's been in contact with several people in the Scandinavian beverage industry who are interested in what's happening with aquavit in the United States. "I think we're going to see American aquavits exported to Scandinavia soon."

At least in the United States, any "caraway-flavored distilled spirits product" can be called aquavit under regulatory guidelines. Aquavit gives you a lot of freedom as a distiller," says Grier. "You can play with all kinds of botanicals and come up with a unique recipe."

For some, this means making something new. For others, it means continuing traditions. The famous Norwegian Linie aquavit got its name when an early-1800s era sea captain tasted spirits that had been stored on barrels in his ship after it crossed the equator and came back. Two hundred years later, Linie's barrels of aquavit still travel to Australia and back by ship before being sold in bottles. The company believes that something about the sea air, the ship rolling over the waves, or perhaps the oceanic temperature imparts a flavor to the beverage that can't be obtained on land. Today's bottles give the name of the ship as well as the date the batch crossed the equator. It's a hard story to beat.

When Vikre of Vikre's Distilling was testing her first aquavit, she brought it to a Norwegian independence festival. "When people were like, 'I want that and not the Linie,' I knew we'd gotten it right."