Accessibility links
The Friendship Bread Project: Can Baking Promote Unity In A Divided World? : The Salt It's the chain letter of baking: a simple starter that you divvy up, keeping some for yourself and sharing the rest with others. It's an old tradition we'd like to see you revive in your community. 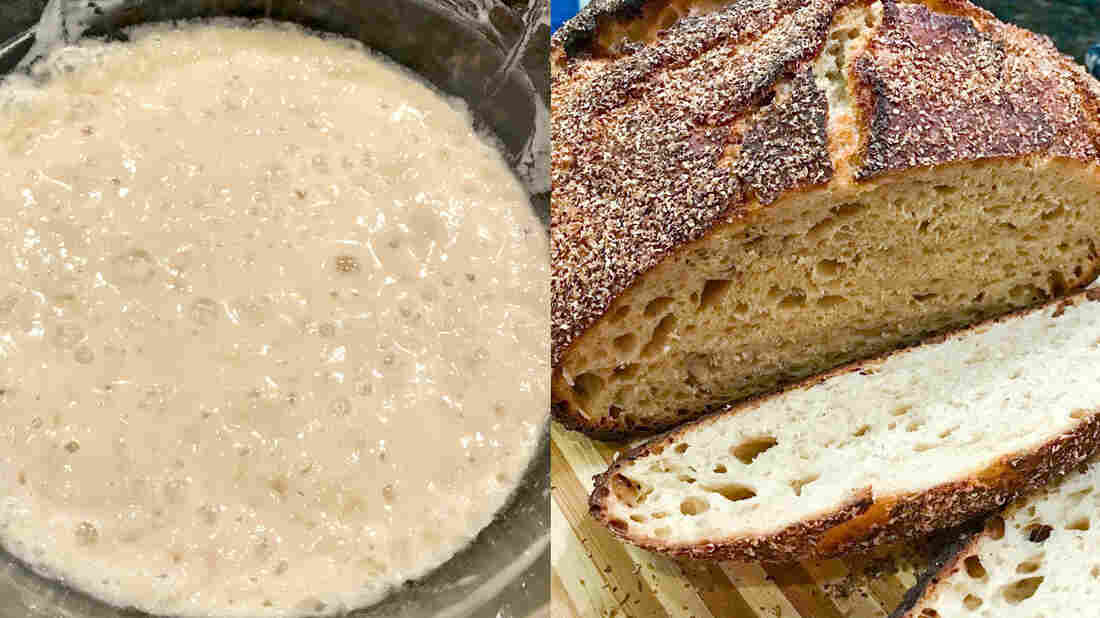 Friendship bread is the chain letter of baking: A simple starter that you divvy up, keeping some for yourself and sharing the rest with others. It's an old tradition that connect neighbors through the act of sharing food. NPR would like to see you revive it in your community. Share your stories on social media — use #NPRFriendshipBread — and we might feature your experience in a follow-up story. Courtesy of Emily H. Landsman hide caption 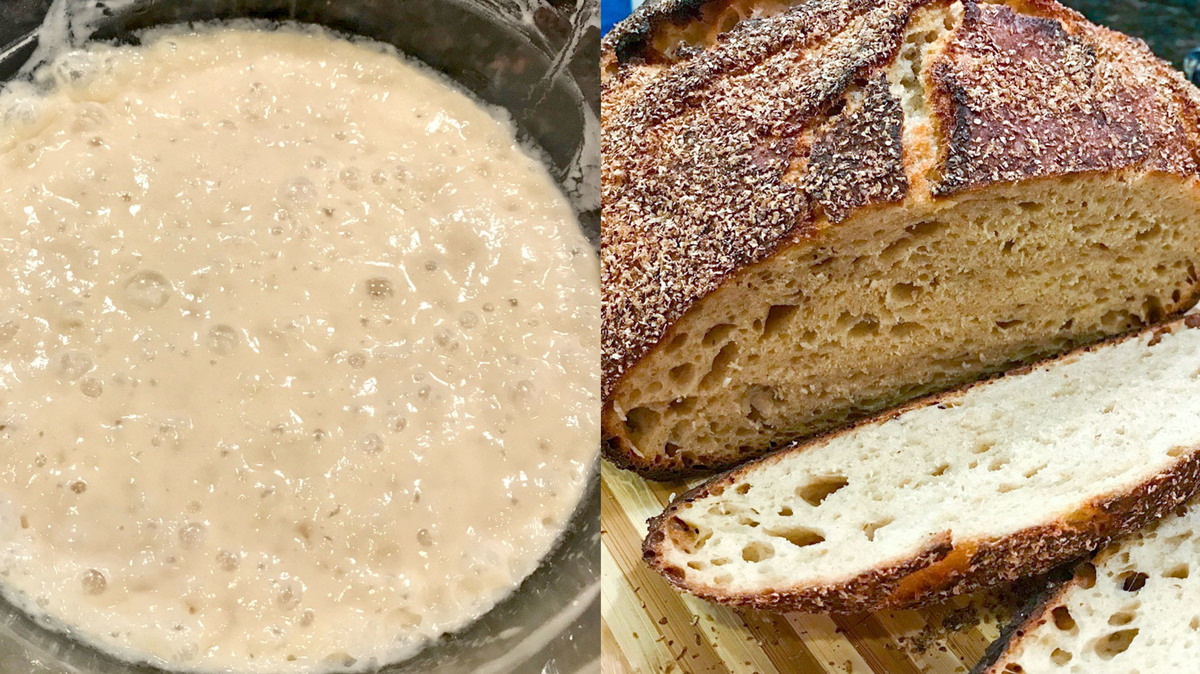 Friendship bread is the chain letter of baking: A simple starter that you divvy up, keeping some for yourself and sharing the rest with others. It's an old tradition that connect neighbors through the act of sharing food. NPR would like to see you revive it in your community. Share your stories on social media — use #NPRFriendshipBread — and we might feature your experience in a follow-up story.

Chef Carla Hall had never heard of "friendship bread" before someone gave her a plastic zip-top bag full of a yeasty, mushy starter. As a young caterer just starting out, she got busy baking up a storm and was excited to tell her friend some days later about everything she had made.

Instead of being delighted, her friend just stared at her. "You used it all up?" she asked. "That's not the point. You're supposed to just use some of it, and then pass it on to someone else. That's why it's called friendship bread."

Hall was mortified, saying now, "I broke the chain. I literally took her love and bashed it, like it was a one-night stand."

Friendship bread — also known as Amish friendship bread — is the chain letter of baking. A simple starter of flour, sugar, milk, water and yeast is mixed together and then developed for 10 days at room temperature. The person who makes the starter, similar to a sweet version of a sourdough starter, keeps some to bake up a loaf of bread or other baked items, then they divide the rest to pass on to friends. If a little of the starter is kept, it can become the basis of a new batch of starter.

With families and friends finding themselves frequently on opposite sides of the political divide over the past year, is it possible for tasty treats, baked under the guise of friendship, to provide a respite from the conflict, and even become a source of healing?

Darien Gee thought so when she first heard of friendship bread in 2009. In fact, she became so enchanted with the idea that she used it as the basis for a novel — appropriately titled Friendship Bread (Random House, 2012) — the story of three strangers who connect over the bread, forging friendships while coping with personal demons.

"In communities where the starter is actively passed around, touching different households and very different lives, it reflects the commonality among us," says Gee of why the friendship bread concept resonated with her. "We are doing this together, we are in this together. This starter exists because we are all playing a part in this process."

Gee was initially introduced to friendship bread when her daughter came home one day with a bag of starter and some bread. "The story for the novel came to me while I was eating the bread. I had a first draft in five months and, along the way, I kept coming up with more friendship bread recipes to help tell the story." In fact, the recipes became so popular after the book's publication, Gee found it necessary to create a website devoted specifically to them, The Friendship Bread Kitchen, spawning hundreds of recipes, from biscotti to pretzels, three cookbooks, and over 77,000 subscribers.

These Dinner Parties Serve Up A Simple Message: Refugees Welcome

The origins of friendship bread — and a similar version known as Herman friendship cake in Europe — have been the subject of some debate, as is the question of whether the recipe is actually Amish. Anne Byrn, who researched hundreds of historical recipes for her book American Cake (Rodale Books, 2016), remembers the friendship bread craze popping up in newspaper columns in the late 1980s, but thinks the recipe can be traced back much further.

"The concept behind it is really old," she says, "and there are recipes for friendship cake, instead of friendship bread, that date back to the 1860s. Before the invention of baking powder in 1855, starters were made with wild yeast just gathered from the air, and they provided the leavening for cakes and breads." Pioneer women traveling the Oregon Trail would have been feeding a starter as they traveled, and certainly would have shared it with each other along the way, she says.

Friendship cake was particularly popular in the 1930s, according to Byrn, when Depression-era homemakers were trying to be resourceful and plan ahead. The recipe that evolved into the cake-like friendship bread some 50 years later, however, took advantage of modern conveniences like dried yeast and even instant pudding.

It's an evolution that can bring up bad memories for some, such as this comment in a 1990 thread: "Somebody gave me some of that stuff years ago but it was a totally different recipe that used a package of Jell-O vanilla pudding. The resulting bread was super sweet. Not to our liking but my MIL [mother-in-law] liked it. For a couple of weeks. And then she too got sick of it. And nobody wanted the damned starter."

Indeed, the most common friendship bread recipe does include a packet of instant pudding with the other ingredients. It's reviled by some, but Gee is among those who love it: The moist raisin-and-nut-studded result, liberally topped with cinnamon sugar, remains Gee's favorite.

"It's a 'love it or hate it' kind of thing," says Gee. "The use of the instant pudding can be controversial, but I have to admit that, 250 recipes later, I still love the original."

While detractors decry that the use of pudding mix is a sign that friendship Bread can't possibly be Amish, Byrn isn't so sure.

"A lot of Amish recipes begin with a pudding mix or a cake mix," she says. "Just because it's Amish doesn't mean it's made from scratch."

Byrn also points to the 1989 PBS cooking show Amish Cooking from Quilt Country, hosted by the late cookbook author Marcia Adams, as a possible source for popularizing friendship bread again. Adams even included the recipe for the starter and the "chain letter" tradition in her cookbook, Heartland: The Best of the Old and the New from Midwest Kitchens (Clarkson Potter, 1991), writing:

"It is my observation that having this starter around is like getting married — it is a real commitment, and it is forever. And like that institution, it gets better with age."

Emily Landsman hadn't had much luck in the past with starters, saying, "Previously I'd been able to go for about a month and then they get funky." But friendship bread was different. "This picked up right away, and I've been able to divide it and keep it alive."

A frequent contributor and baker for the Jewish Food Experience, Landsman hadn't heard of friendship bread until asked to give it a try, but now she's hooked. "I like the fact that you're supposed to share it," she says. "I wound up giving [the starter] to my new boyfriend's good friend's wife, who is a baker. I knew I'd need her approval, so what better way to connect with her than through bread?"

Beginning with her own standard no-knead bread recipe as opposed to the instant-pudding recipe, Landsman has gone on to make two loaves, one with whole wheat and another with spelt flour, as well as a batch of sesame seeds knot rolls, in the first month. She's even dehydrated the starter to make it easier to transport as a gift.

Gee thinks the starter is integral to the friendship bread experience. "We've become so independent and insular as families," she says. "You can make any of these recipes without the starter but it wouldn't be the same, because you wouldn't have this element of sharing and passing it on. It keeps you connected to the community and other people, an approach to cooking and asking that we don't have a lot of these days."

And so, here's a baking challenge for readers of NPR's The Salt: Make up your own batch of friendship bread starter and start a new chain, then tell us about what you made and who you shared with, especially if you've shared it with family, friends, or coworkers who have conflicting world views from yours. Post photos of the results on social media and tag them with #NPRFriendshipBread and we may do a follow-up story about your friendship bread experience. Tweet at us @NPRFood.

"I think any act of giving is the first step in healing a broken or frayed relationship," says Gee. "I am all about baking with intention, and I'd like to think that the act of baking, coupled with the act of giving, could be the start of a new conversation."

Kristen Hartke is a DC-based food and beverage writer.

In a small bowl, dissolve yeast in water. Let stand for ten minutes. In a 2-quart non-metallic bowl, whisk together the flour and sugar, then slowly stir in the milk and dissolved yeast mixture. Cover loosely with plastic wrap or a kitchen towel and let stand at room temperature until bubbly. This is day 1 of the 10-day cycle. Once the mixture is bubbly, you can transfer the mixture into a gallon-size ziptop plastic bag, sealing and leaving at room temperature, and follow the process below. Remember that the bag can fill up with air as the starter ferments, so be sure to release that air so the bag doesn't burst. The finished starter can also be frozen in 1-cup increments and thawed when ready to use.

Day 10: Pour starter into a non-metallic bowl and add 1 cup flour, 1 cup sugar, and 1 cup milk. Mix well with a non-metal spoon. Divide out 1 cup portions of the starter into separate gallon-size ziptop plastic bags. Keep one bag for yourself and give the rest away, along with these instructions and a baked Friendship Bread recipe of your choice.

Mix together all bread ingredients thoroughly and pour the batter evenly into the loaf pans. Sprinkle the remaining cinnamon-sugar mixture on top and bake for one hour or until a toothpick inserted in the center comes out clean and the bread has pulled away slightly from the sides of the pan. Cool for 10 minutes in the pan before inverting onto a rack to cool completely.

A previous version of the recipe for Friendship Bread incorrectly called for 25 ounces of active yeast. The correct amount is 0.25 ounces — or 2 1/4 teaspoons.