Accessibility links
Why Is Venison On Expensive Plates And Food Pantry Shelves? : The Salt Venison, a luxury meat sold in high-end stores also shows up on the winter menus of expensive restaurants. But venison from deer killed by hunters can't be sold, so much of it is given away for free. 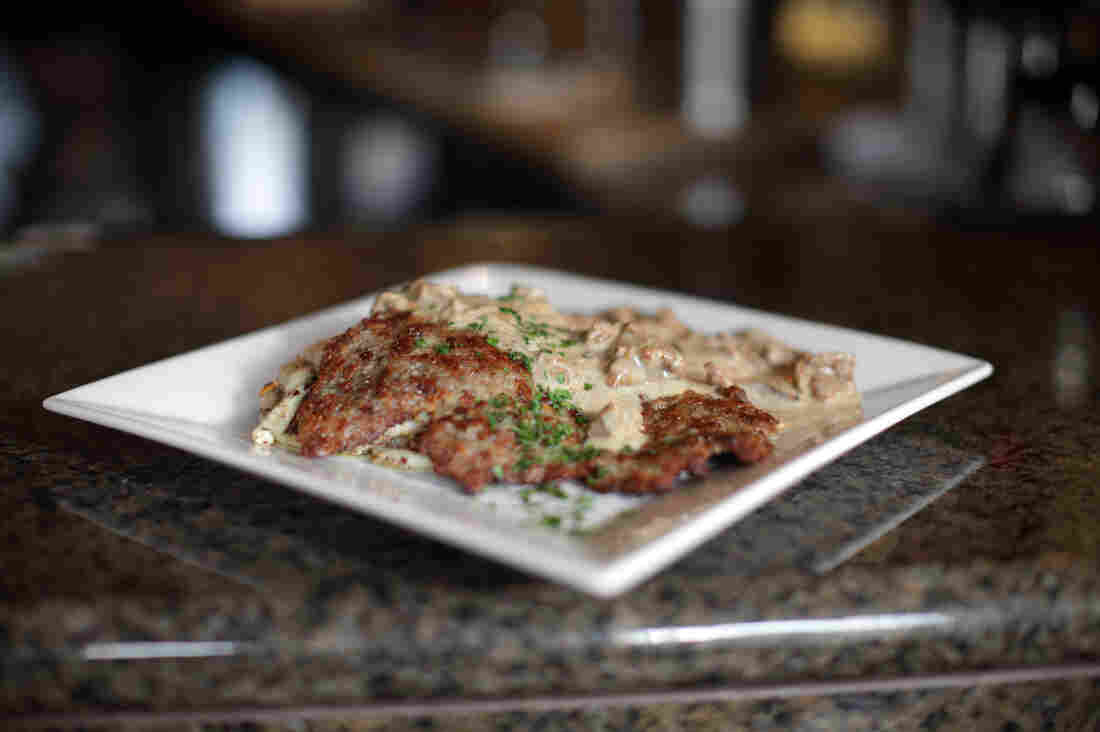 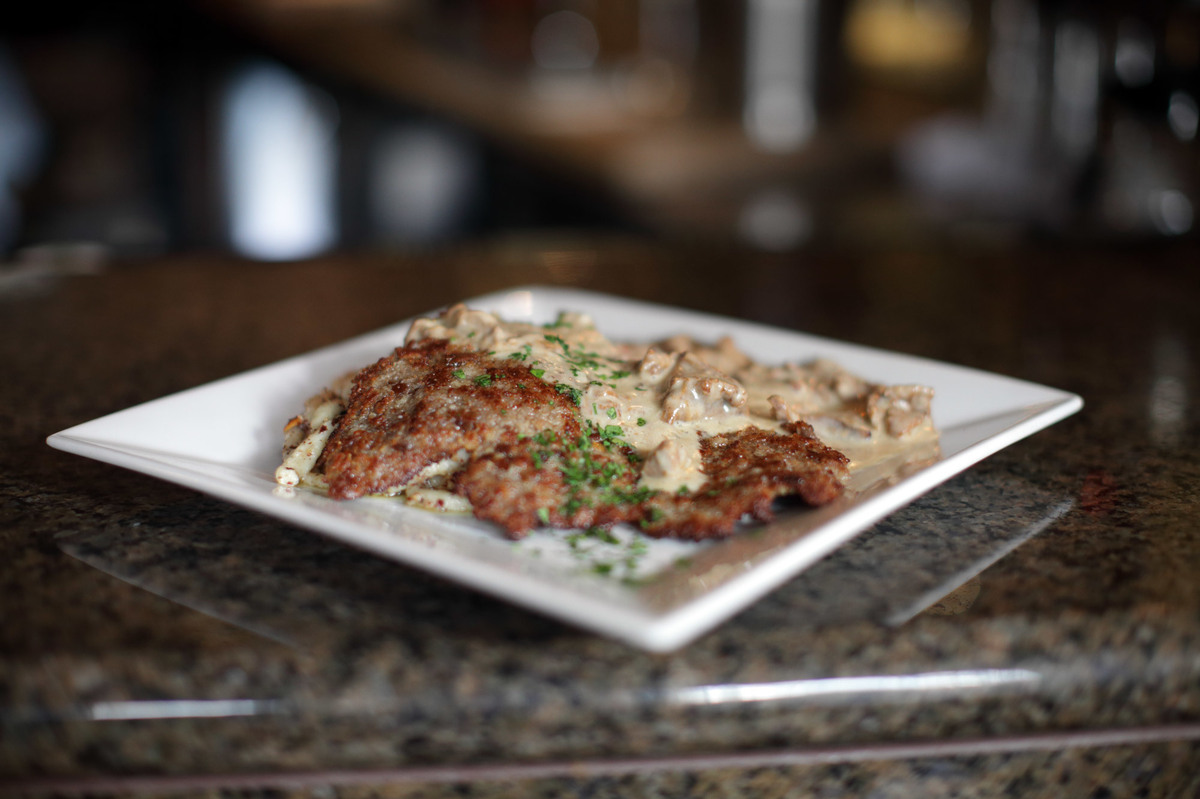 Venison is on the winter menu at Cafe Berlin, in Washington, D.C. In this dish, called Jäger Jäger, the venison schnitzel comes with hazelnut spätzle, sautéed mushrooms, and cream sauce.

Wintertime is a special time of year at Cafe Berlin, located just a few blocks from the Capitol building in Washington, D.C.

This is when they roll out their menu of wild game, such as deer, wild boar, and quail. Regular customers have come to expect it. "They ask, weeks in advance, 'When does the wild game menu start? When does it start?' " says James Watson, one of the restaurant's chefs.

And the star of that menu is venison. The restaurant serves venison ribs, venison loin, even venison tartar. It's food that takes your mind back to old European castles, where you can imagine eating like aristocracy.

You won't see venison in ordinary supermarkets. At Wagshall's, a specialty food shop in Washington, I found venison loin selling for $40 a pound. This venison comes from farms, usually from a species of very large deer called red deer. Much of it is imported from New Zealand. 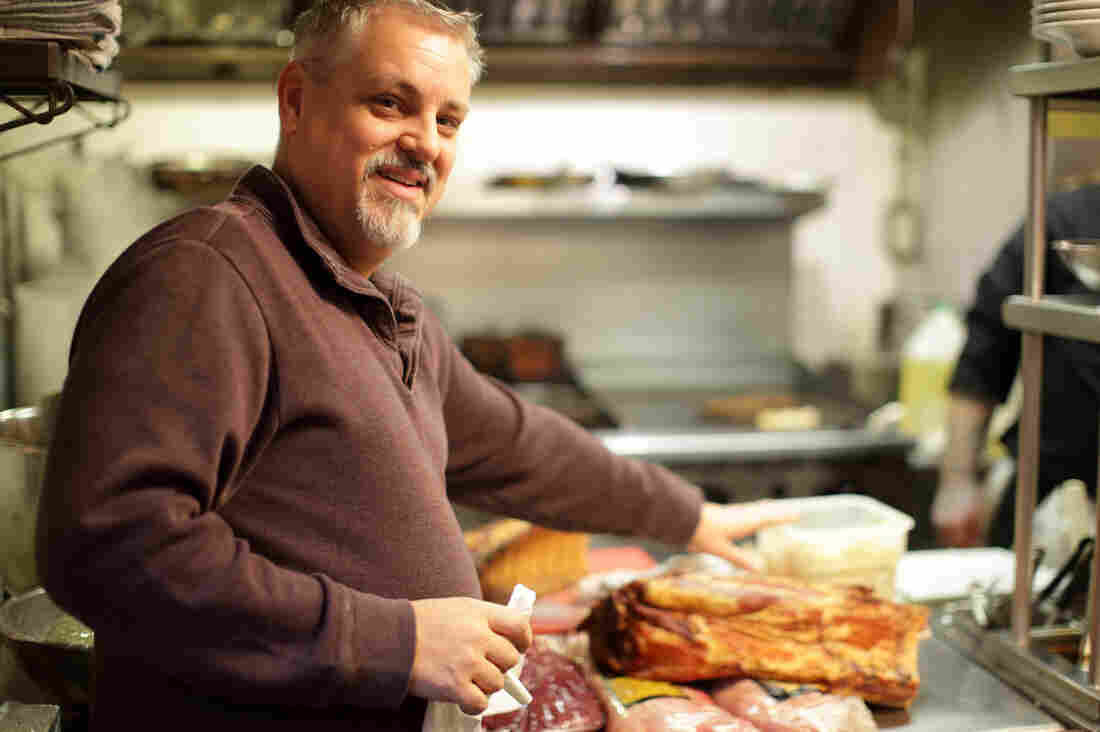 Yet there's a very different side to this luxury meat. Less than two hours drive from Washington, Daniel Crigler has a whole freezer full of venison that he got for free.

Crigler's home in central Virginia is surrounded by woodlands full of white-tail deer. For Crigler, they are venison on the hoof. And he loves hunting. "I love the outdoors. I love being out. But I also like to eat the meat," he says, chuckling.

It's pretty much the only red meat he eats. And as he shows off the frozen cuts of venison in his freezer, this crusty man reveals his inner epicurean. "That's a whole loin, right there," he says. "What I like to do with that is split it open, fill it full of blue cheese, wrap it up in tin foil and put it on the grill for about an hour and a half."

Sick From The Stick: When Teens Cook Venison Kabobs

And here's the odd thing about this meat, so scarce and expensive in big cities; so abundant if you're a hunter in Madison County, Virginia.

Hunters like Crigler kill millions of deer every year in America, but the meat from those animals can't be sold: It hasn't been officially approved by meat inspectors. Also, the government doesn't want hunters to make money from poaching. 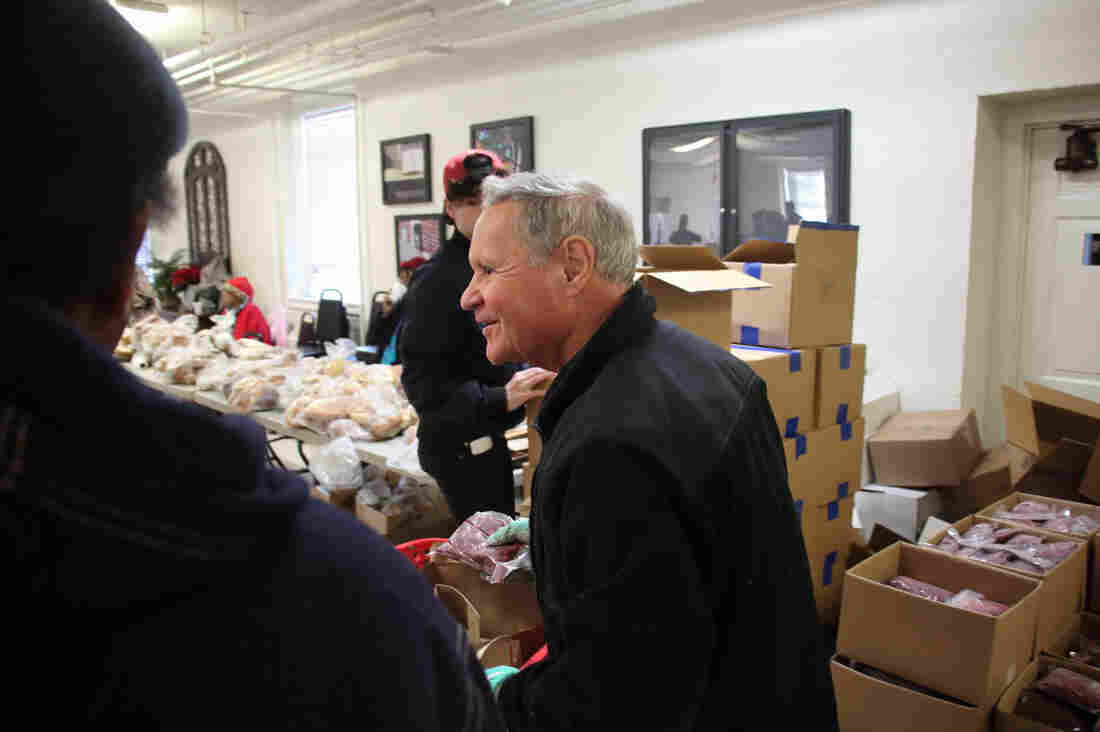 Phil Ferlazzo, a volunteer with Empowering Culpeper, distributes free venison to people who need it. Boxes of frozen venison are stacked on pallets behind him. Dan Charles/NPR hide caption

Yet hunters are allowed to give it away, and many do. As a result, venison occupies a paradoxical place in the world of food. It's a luxury food that turns up in notably non-luxurious places.

On a recent mid-December morning, there are boxes of it piled in the basement of Culpeper United Methodist Church, in central Virginia. An organization called Empowering Culpeper is using the space for its monthly distribution of free food to people who need it.

"We've got over 600 pounds of venison," says Jill Skelton, who's in charge of the program. "A lot of times, venison is the only type of meat that we have available to distribute."

All of this venison was donated by hunters, including Crigler. An organization called Hunters for the Hungry covers the cost of cutting or grinding the meat from donated deer, and organizes distribution of the venison from small deer butchering shops to food pantries and groups like Empowering Culpeper. There are similar organizations all over the United States, all devoted to helping hunters donate meat from the deer that they kill.

Here in the church basement, people have lined up for food, and retired dentist Phil Ferlazzo, a volunteer with Empowering Culpeper, mans the venison station. "How about venison? Do you like venison?" he asks. Most of the people take the frozen meat. Some do not.

Venison, for some of them, is clearly not like the meats they'd pick up in a supermarkets. It's not coming from a faraway farm; it's from the woods next to their homes, and they have personal experiences with deer.

That's why Alsace Lee Kwai won't eat it. "The first time I ever went hunting with my husband and he shot one, I heard one cry," she says. "Like a baby. No. No thank you."

Yet Bonita Gray has the opposite reaction. She grew up eating meat from deer and rabbits that her family shot, and she loves it. "I take all of it, if they give it to me!" she says. "And it tastes so good. Season it real good, put onions on it, green peppers, make deer burgers. Oh, my God!"

And that experience is something she'll have in common with people spending plenty of money on those wild game specials at Cafe Berlin.