Accessibility links
Yemeni Cafe Owner Becomes Cultural Ambassador In Dearborn, Michigan : The Salt A café owner in Dearborn, Mich., sees himself as part entrepreneur, part cultural ambassador for his home country, which is more associated with war than being the world's first coffee exporter. 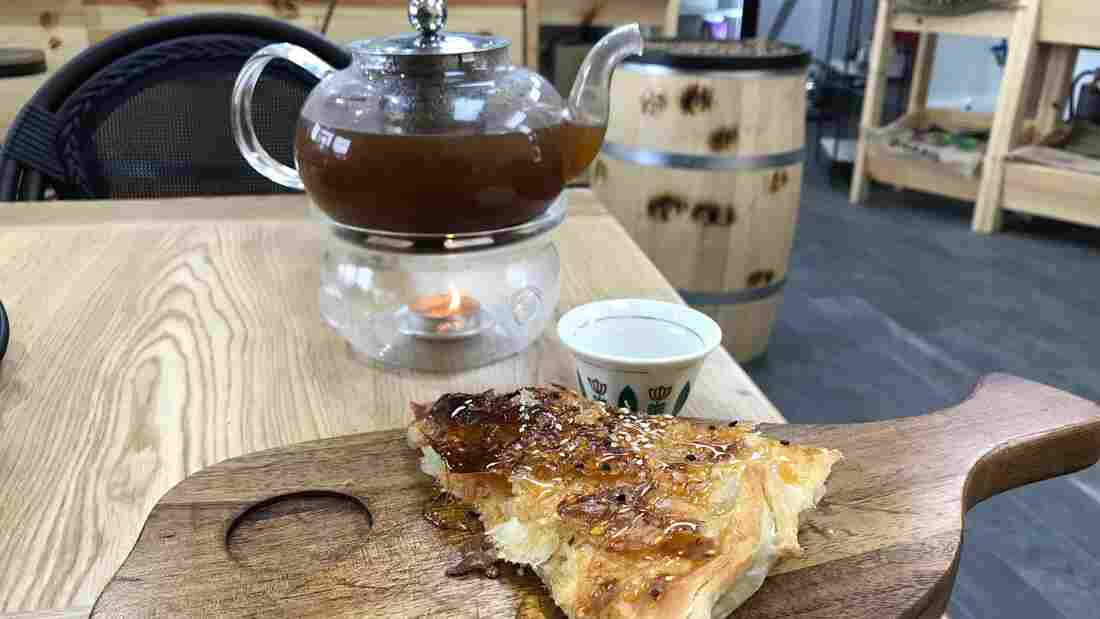 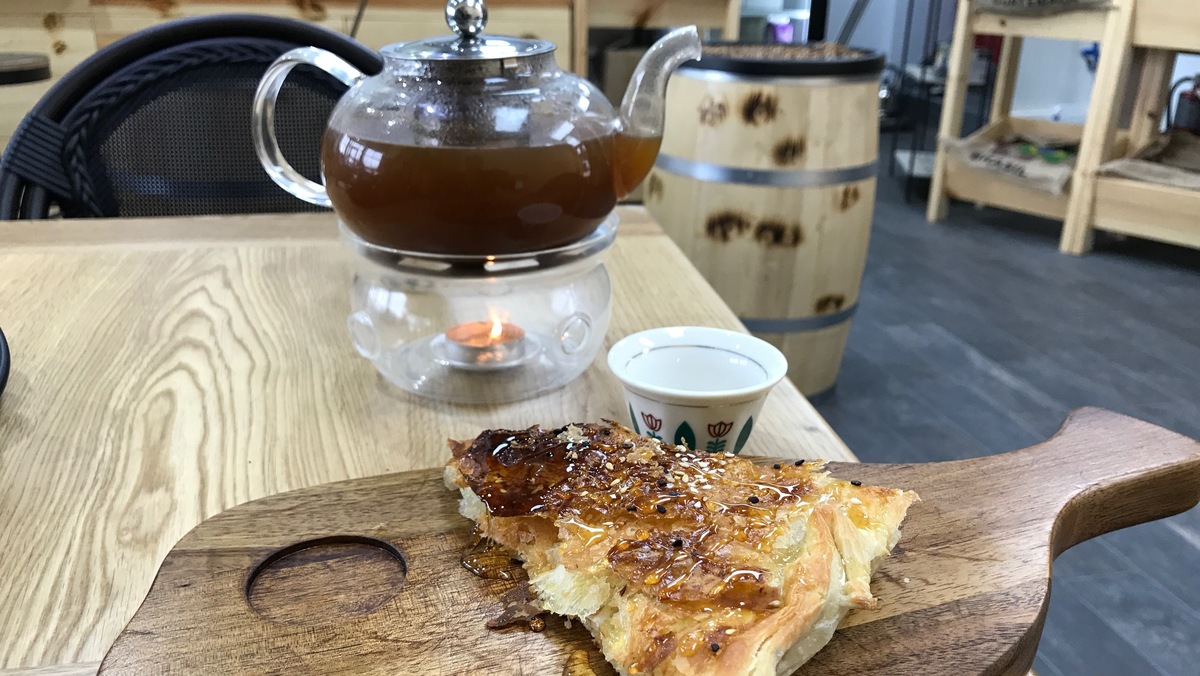 A traditional pot of Yemeni coffee, mixed with cardamom and ginger, is served with a Yemeni sweet honey bread at a new Yemeni coffee shop in Dearborn, Mich. Owner Ibrahim Alhasbani sees himself as part entrepreneur, part cultural ambassador for his home country.

The 35-year-old owner of a new Yemeni coffee shop in Dearborn, Mich., never imagined he would enter the coffee business. Ibrahim Alhasbani was born in Yemen and grew up on a coffee farm outside the country's capital city of Sana.

"I had enough coffee in my life," Alhasbani says. "But when I moved to America and the problems started back home, I told myself I have a chance to show that Yemeni coffee is really good and that Yemen is more than just violence and war."

A couple of months ago, he opened Qahwah House in Dearborn, a city with a high concentration of Arabs and Arab-Americans (qahwah means coffee in Arabic).

Alhasbani is fond of reminding customers that the first known coffee shipments in the world were allegedly launched from the Port of Mokha in the 1400s.

Yemeni coffee is known for its strong floral and spice notes, and the cup Alhasbani prepared for me was served like a cup of masala chai, with a heavy amount of cardamom and ginger, as well as a hint of cinnamon. He charges about $5 a pot, a huge contrast to some companies that sell a pound of Yemeni coffee for $250. He can do this because of ties to his family's business back home.

"These beans are 100 percent from my family's farm," Alhasbani says, beaming.

Today he sees himself as part coffee entrepreneur, part cultural ambassador. But this wasn't the career he expected. After completing his studies at Sana University in business, he worked at Yemeni Airlines, where his father spent his entire career. Desk life bored him and he began working for Red Bull, the energy drink company, which was just entering Yemen at the time. Soon he was traveling across the Middle East and Europe, earning accolades for his marketing acumen.

"I did so well, people in Yemen thought I was the founder of Red Bull," Alhasbani says with a wide smile.

With the money he earned, he and a business partner opened a café in Sana called Amoré, which specializes in Italian-style coffee like cappuccinos. He also launched two restaurants and planned to open more. But those plans were derailed when the tensions escalated in Yemen after the Arab Spring of 2011. 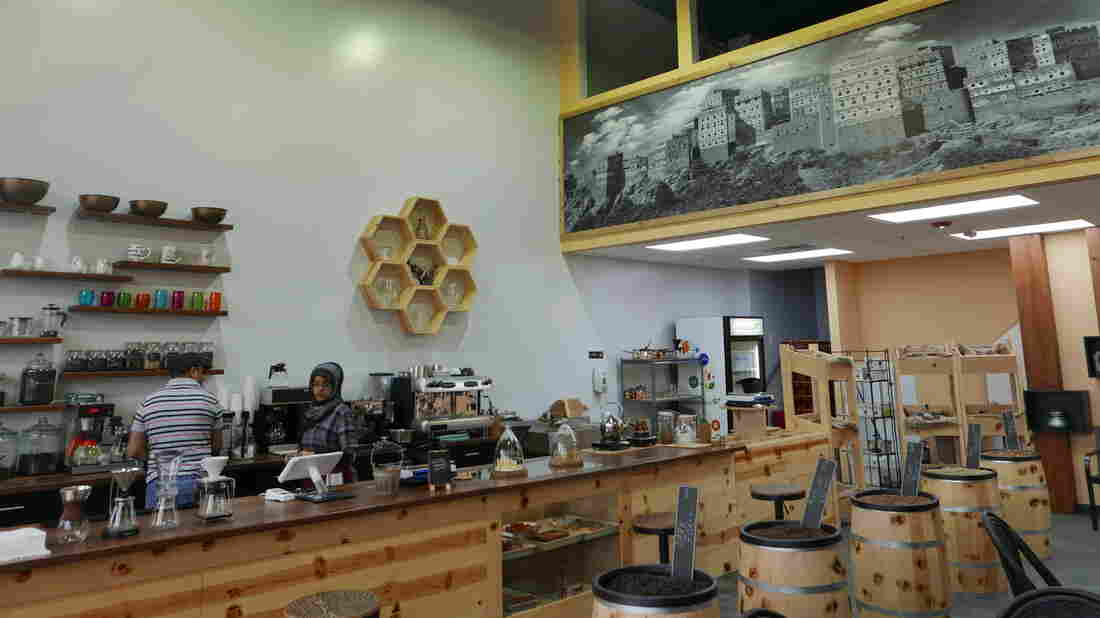 A view inside Qahwah House, a Yemeni coffee house in Dearborn, Mich. The city has a high concentration of Arabs and Arab-Americans (qahwah means coffee in Arabic). Zahir Janmohamed hide caption 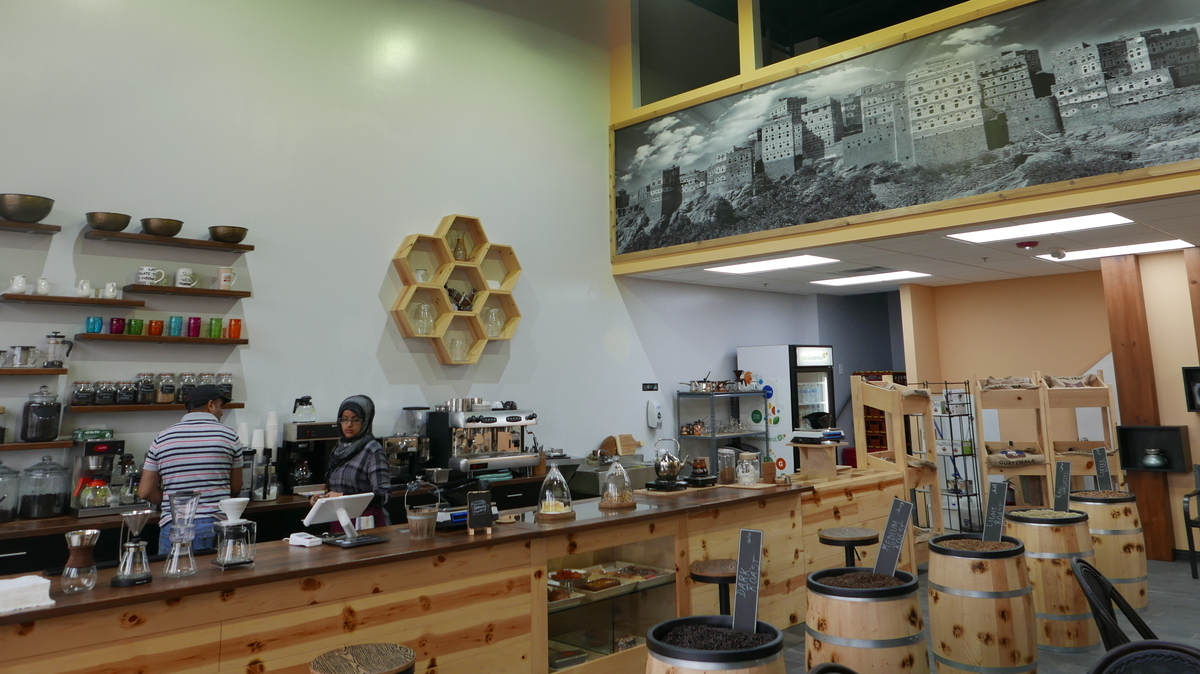 A view inside Qahwah House, a Yemeni coffee house in Dearborn, Mich. The city has a high concentration of Arabs and Arab-Americans (qahwah means coffee in Arabic).

"A bomb hit very close to our home. My brother was in a coma for 30 days. He tried to run away from the explosion but he did not succeed and today he is blind," Alhasbani says, his voice trailing off.

Does he know which group was responsible for the bomb attack, I asked him.

"Yes," he said. "Idiots. Lost people. What else is there to say about them?"

Even before Yemen's civil war broke out in 2015, Yemen was one of the world's poorest countries. In 2012, aid groups reported that 44 percent of the population was undernourished. Today the conflict is largely between those loyal to Yemen's President Abdrabbuh Mansour Hadi and the Houthi rebel movement. According to the United Nations, 18 million people in Yemen are now in need of humanitarian assistance and more than 7,600 people have been killed since the civil war began.

Worried about his future, Alhasbani decided to leave Yemen in 2011. Through his work at Red Bull, he had a lot of contacts in the U.S. and visited New York City on a tourist visa. He kept extending his tourist visa and soon fell in love with an American woman, whom he married. He began working for Budweiser and after his marriage did not work out, Alhasbani moved to Dearborn, where he married a Yemeni-American woman.

"I love it here. It's the perfect combination of Western and Arabic culture," he says.

However, because of President Trump's travel ban, which targets Yemen, among other countries, his brother and mother cannot visit. He has not seen his family in Yemen in six years.

"I don't like to talk about politics," he says. The topic kept coming up, though.

His main expenses are fixed — his rent, as well as paying back the credit card debt incurred to open the café. These are fixed, predictable expenses. But it's the fluctuating cost of importing coffee from Yemen that worries him.

His brother manages the family farm, but given the violence there, it is increasingly difficult to find reliable delivery services within the country. Once his coffee reaches Yemen's port, his team packs as many beans as they can into a shipping crate. A single container can fit about 6 tons of coffee beans. It takes about 40 days to reach the U.S. at a cost of $4,000. On the day I visited, Alhasbani was frantically trying to figure why his shipping container was stuck at a U.S. port, at a cost incurred by him.

"I don't know what's happening. Maybe there might be increased security against Yemeni goods," he says.

It's hard to verify his claim, and it could be that the extra screening methods are applied across all imported goods. Still, Alhasbani wishes he could bring his brother, and his Yemeni friends, to the U.S. to help him with his new café. He also hopes to set up a fund to help young kids in Yemen so that they are not lured by extremist groups there. But he has another motive in opening his café as well — introducing Americans to Yemeni coffee.

"Yemeni coffee is really good," he said. "You try it just once and you will say, 'It's better than pumpkin spice.' "

Zahir Janmohamed is a senior news editor at Hyphen magazine and the co-host of Racist Sandwich, a podcast about food, race, gender and class. Follow him @zahirj