Accessibility links
Shellfish Industry, Scientists Wrestle With Potentially Deadly Toxic Algae Bloom : The Salt After decades with no sign of a lethal neurotoxin, the algae that produces it is now plaguing the warming waters of the Gulf of Maine, forcing unprecedented closures in shellfish harvesting. 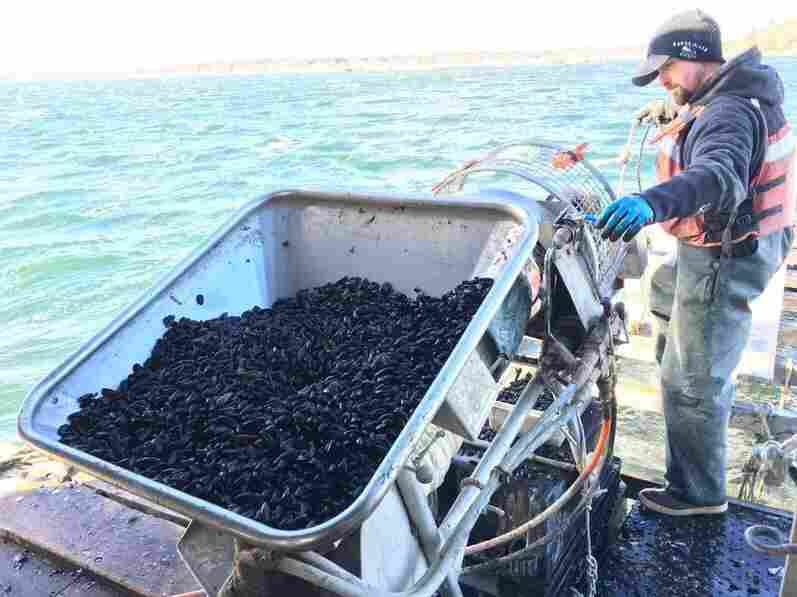 Bangs Island Mussels worker Jon Gorman sets juvenile mussels onto a rope that will be their home for the next year as they grow to market size. Fred Bever/Maine Public Radio hide caption 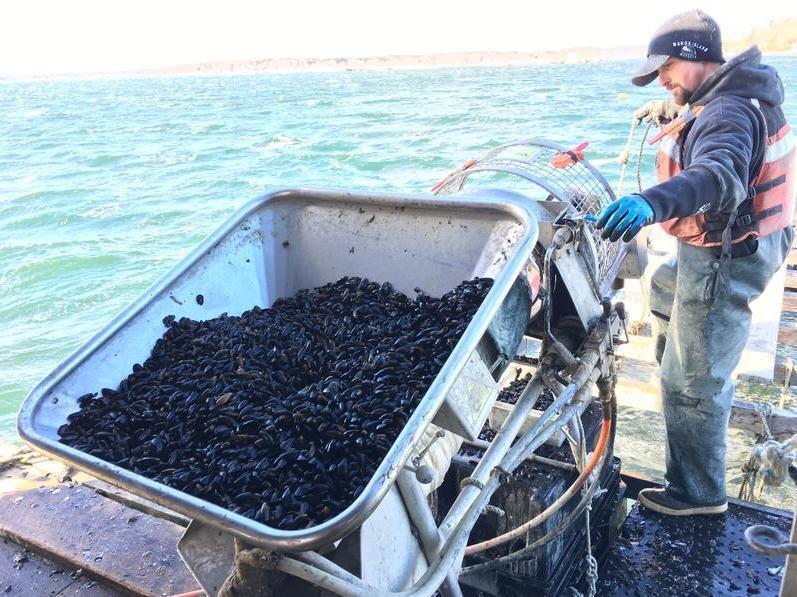 Bangs Island Mussels worker Jon Gorman sets juvenile mussels onto a rope that will be their home for the next year as they grow to market size.

A new threat to New England's shellfish industry seems to be establishing itself more firmly, and regulators are trying to stay ahead of potentially deadly blooms of toxic algae that may be driven by climate change.

Thirty years ago, four people died from amnesic shellfish poisoning after eating cultured mussels from Canada's Price Edward Island. The mussels contained domoic acid, a neurotoxin produced by a class of algae called pseudo-nitzschia. The toxin turned up in PEI mussels the next year, but for decades after that wasn't heard from again on the Eastern Seaboard.

Then, in the fall of 2016, toxin-bearing pseudo-nitszchia bloomed off Down East Maine in areas that previously never saw an algae bloom, as well as off Massachusetts and Rhode Island. Regulators in Maine have closed Down East shellfish harvests twice since then.

Now for the first time, a pseudo-nitzschia bloom is plaguing a large swathe of Casco Bay, from south and east of Portland to South Harpswell. Much of Casco Bay has been closed to shellfish harvesting for weeks.

That's a worry here on an aquaculture raft anchored off windy Falmouth, where Matt Moretti shovels bushels of juvenile mussels to be returned to the sea until they grow to market size.

Moretti, who co-owns Bangs Island Mussels, is not so happy about the ongoing algae bloom, and he's keeping his fingers-crossed that it won't affect his harvest. The company already suffered from an extended closure in the spring, when a different bloom — the annual red tide that Maine has long been familiar with — shut down the operation for 10 weeks.

"It's difficult. If we were shut down now it would be a double whammy for a really tough year, and it would be bad," he says.

Bangs Island continues to bring mussels to market right now, because it's able to give samples from each shipment to a state lab for testing. And so far, so good. But only the larger aquaculture lease operations like this one have that capacity.

Early this month, the state instituted a broad closure of shellfish harvesting in the bay — mussels, scallops, oysters, quahogs, clams. For smaller outfits who can't do their own testing, such as Jared Lavers, who digs for wild clams in Freeport, it's a matter of finding other means until the bloom subsides.

"I have since hopped on a couple different lobster boats to try to fill in the gap, but I'm not able to make as much money as I normally would. I'm doing everything I can to keep my head above water," he says.

"It's unprecedented to have a major biotoxin closure like this in December," says Kohl Kanwit, who directs the public health bureau of Maine's Department of Marine Resources. "[It's] particularly terrible for families who depend on clamming or shellfish livelihoods."

But given the stakes for public health, there's not much choice, she says. In the earlier blooms of pseudo-nitzschia, she says the state had play catch up after recalls of several shipments of shellfish that might have been exposed before the threat were detected.

Now, Kanwit says more frequent testing for the algae and for toxin buildup in shellfish is becoming the norm. When this bloom first surfaced, regulators moved quickly to impose a precautionary closure. Now, it's all hands on deck, she says, for state regulators and scientists.

"It's not like red tide where we have decades and decades of experience managing this. We don't have any historic data here. So we are trying to gather as much information as we can while this bloom is going on," she says. "We are archiving phytoplankton samples, we archive all kinds of shellfish samples, because one of the other things we want to look at is how do the different species respond to this particular toxin."

"The reason they produce the toxin we just don't know," says Mark Wells, a marine science professor at the University of Maine in Orono who has been studying toxic blooms on the West Coast for years.

Wells says the recent East Coast blooms may be associated with temperatures in the Gulf of Maine's waters, which are warming faster than most water bodies worldwide.

"We're wondering whether the warming in the surface may actually be selecting more for pseudo-nitzschia, so that in the fall, when the bloom happens, there's more of a chance that pseudo-nitzschia will be the ones that are blooming," he says.

The uncertainty about the wheres and whens of toxic blooms has Moretti and others in the industry strategizing for the future.

"We're trying to build it into our business, some redundancy, some geographic separation to get out of a high-risk area or at least into a lesser risk area that has some different sort of time scale of blooms," he says.

Redundancy will be costly but worth it, Moretti says, to protect the business against the unpredictability of a changing ecosystem.

Regulators, meanwhile, continue testing samples at some 300 sites around the state, including the Damariscotta River, the heart of Maine's growing oyster harvest. So far the toxic bloom has not turned up there.