Accessibility links
Quebec's Epiphany: A Nostalgic Cake Fit For Both Kings And Family : The Salt The Canadian province, once staunchly Catholic, has become proudly secular, and its king cakes have morphed into more of a fun family tradition — while also taking on a tasty French flair.

Quebec's Epiphany: A Nostalgic Cake Fit For Both Kings And Family

Quebec's Epiphany: A Nostalgic Cake Fit For Both Kings And Family 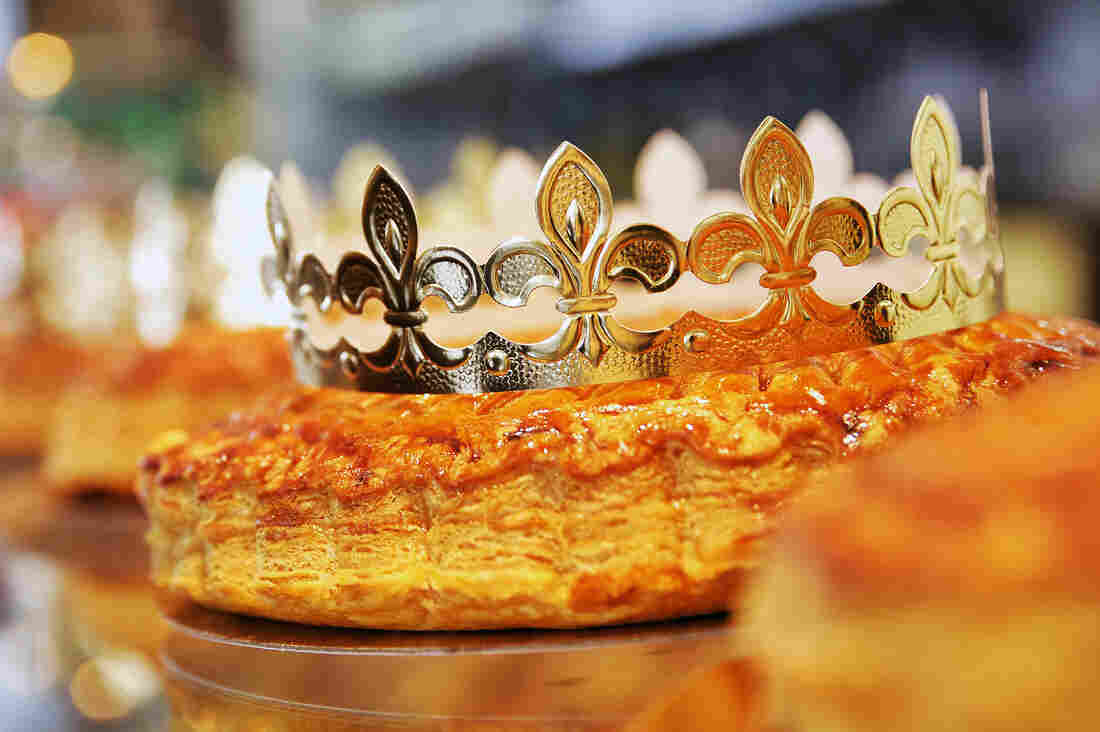 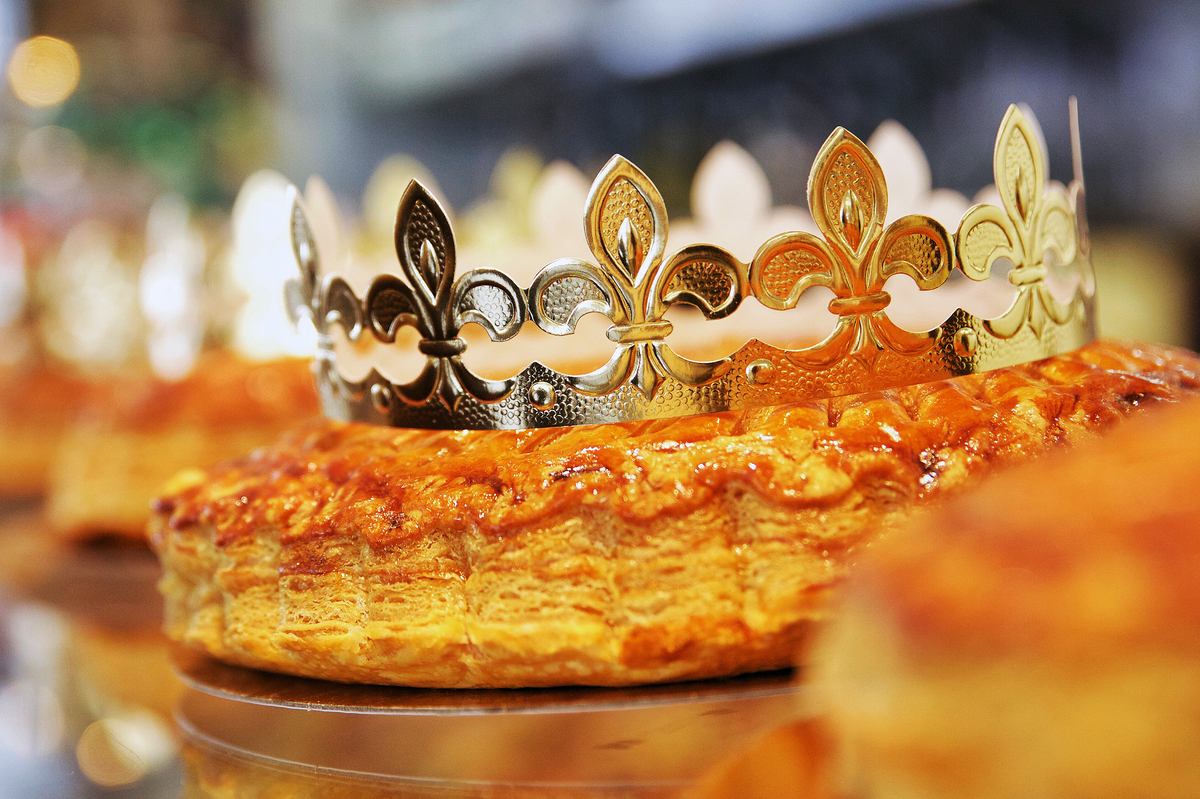 I was first introduced to a gâteau des rois, or king cake, as a child growing up in Montreal. My mother had made it to celebrate Epiphany, on Jan. 6, and I was excited to discover a wax paper-wrapped coin baked inside my piece. My younger sister had one in hers, too. This meant we would each receive a small gift. We only did this a few times as a family over the years, but I've always remembered those times with a special fondness.

The Epiphany is a Christian holiday commemorating the manifestation of Jesus Christ to the Magi, when they arrived in Bethlehem to present the baby Jesus with gifts, on the twelfth night after his birth. Celebrating the Epiphany with a gâteau des rois is a Catholic custom that originates from a Roman pagan ritual, which came to Quebec via France. The Romans would bake a cake, inside of which they would place a bean or a porcelain fish. Whoever discovered the object — regardless of his or her social status — would play king or queen for a day and the others would be the finder's slaves.

Until the 1960s, Quebec was a staunchly Catholic province, and it was common for French Canadians to attend church on Jan. 6 before sitting down at home for a souper des rois, or kings' supper, followed by the gâteau des rois, usually a very dense and rich cake. However, since it was normally a home-baked cake, any kind would do. Today, Quebec is proudly secular, and thus, for most families, Epiphany celebrations — if the holiday is observed at all — have little to do with religion. 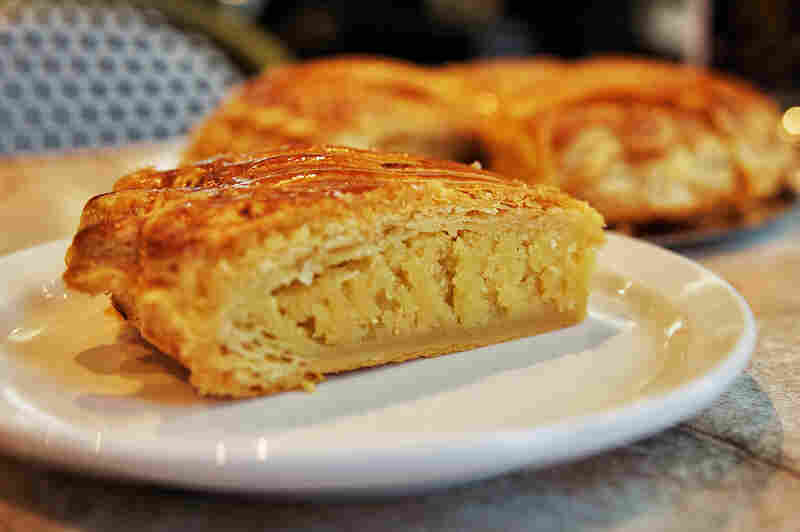 A slice of galette des rois at Duc de Lorraine contains top-quality baker's flour and butter. About 600 cakes were sold last year between Christmas and the end of January. Elizabeth Warkentin for NPR hide caption 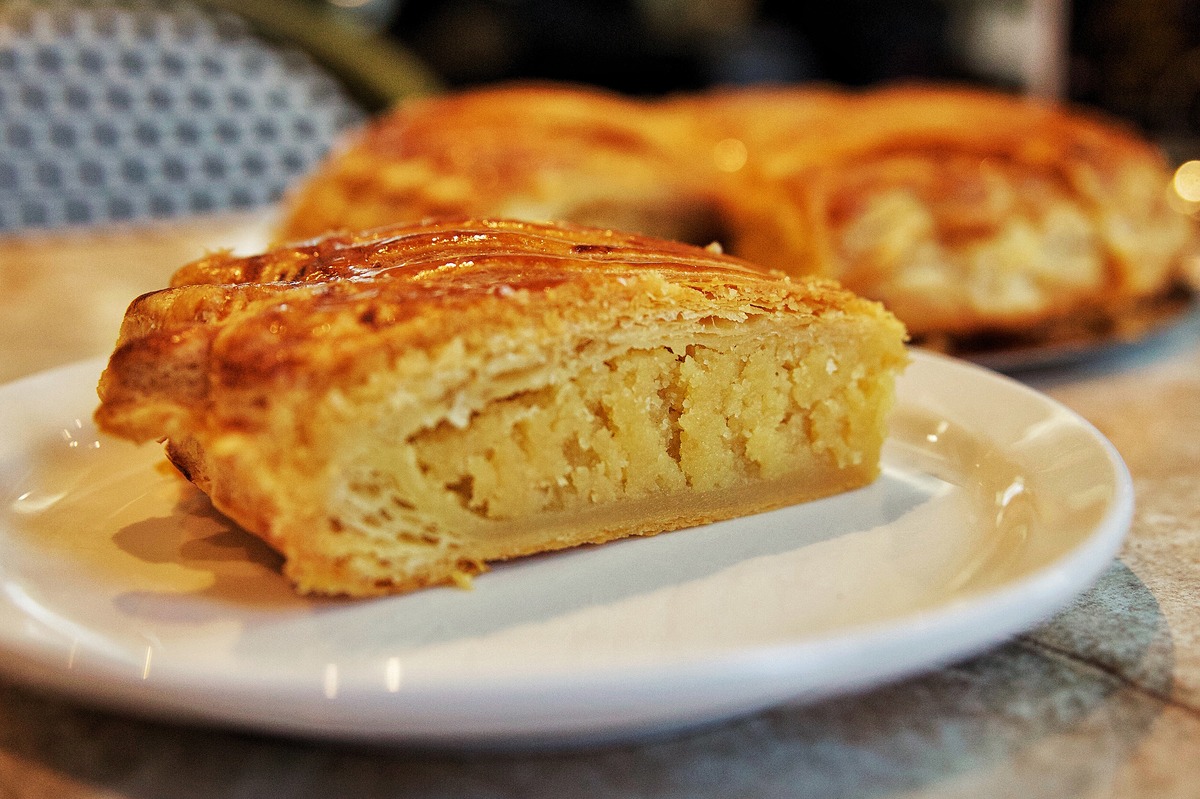 A slice of galette des rois at Duc de Lorraine contains top-quality baker's flour and butter. About 600 cakes were sold last year between Christmas and the end of January.

For many older Québécois, eating king cake with their families is something they remember with a sense of nostalgia. Madeleine Lepage, who lives about 60 kilometers east of Montreal, recalls: "We celebrated when I was young. It was a really fun, playful sort of holiday. My mother would bake a cake with a bean inside. Whoever found it would get to be king or queen for a day and they'd wear one of those Christmas cracker hats. My mother loved holidays, and she would go all out with little gifts and prizes, too. I continued the tradition with my own children."

Still, unlike in France, Spain or New Orleans, eating king cake for Epiphany in Quebec is not a ubiquitous or carnivalesque occasion. In fact, it's a tradition that didn't really begin to catch on until Montreal's Expo 1967, the World's Fair, when French pastry chefs established themselves in Montreal and opened patisseries.

These chefs brought with them their country's culinary traditions, introducing Montrealers to the more sophisticated galette des rois, a rich frangipane-filled puff pastry cake with a specially made porcelain figure inside. Today the tradition is becoming increasingly popular, with patisseries selling hundreds of galettes during the holiday season.

Bruno Cloutier is chef pâtissier, or head pâtissier, at Duc de Lorraine, which is known for its classic French pastries as well as being Montreal's oldest French patisserie, established in 1952. Cloutier notes that they're selling more and more galettes each year. Last year, they sold about 600 between Christmas and the end of January, and he expects to sell more this season.

To obtain an ultra-flaky pastry, says Cloutier, a painter and meticulous chef with a deep passion for his work, you have to use baker's flour and top-quality baker's butter, only available wholesale. "And you can't knead or fold the dough too much or it will be too airy," he advises. "You also have to give the dough time to rest so that it will stay moist." The effect of flaky layers upon layers of puff pastry, he says, is achieved as the butter in the baking dough reaches a boiling point in the oven, pushing the pastry upward and forming layer upon layer.

As for the frangipane filling, Cloutier sets me straight on the distinction between marzipan and frangipane. While both are sourced from almonds, marzipan is the sweet, malleable paste that's more like clay or Plasticine, while frangipane is a cream. To make frangipane with the right taste and moist consistency, you have to use pure, finely ground almond powder, not marzipan paste. 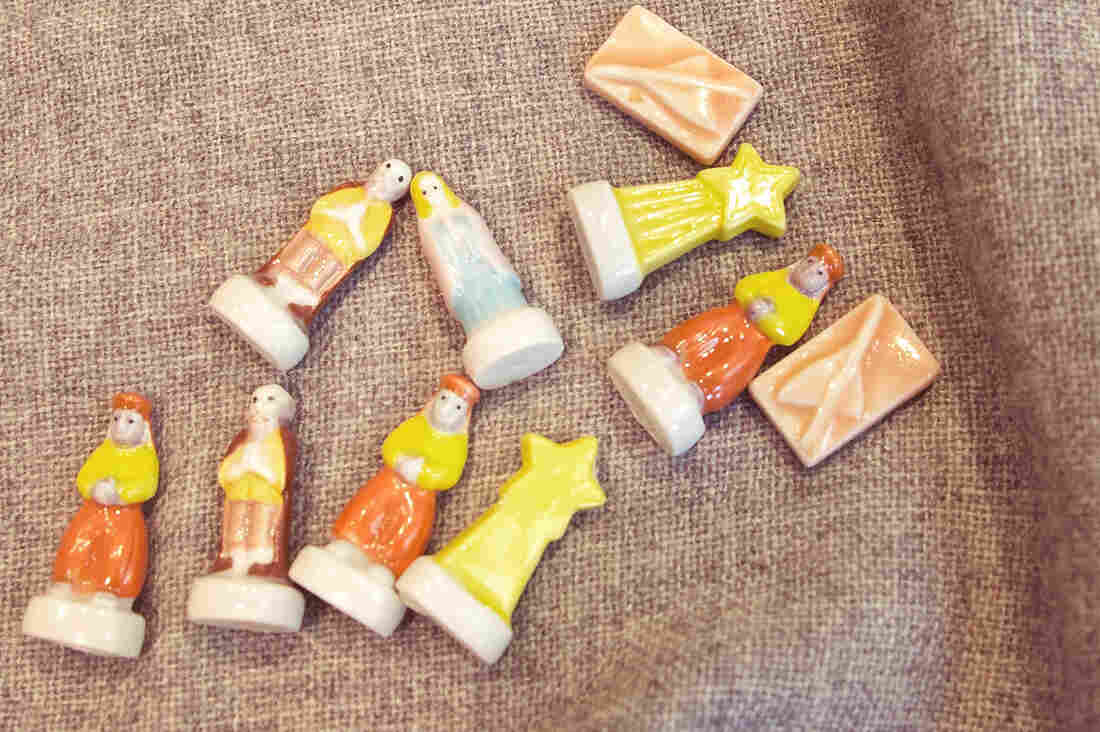 The porcelain figurines inside the cakes are imported from France and range from the biblical to the whimsical. Like baseball cards, some people — called fabophiles — collect them. Elizabeth Warkentin for NPR hide caption 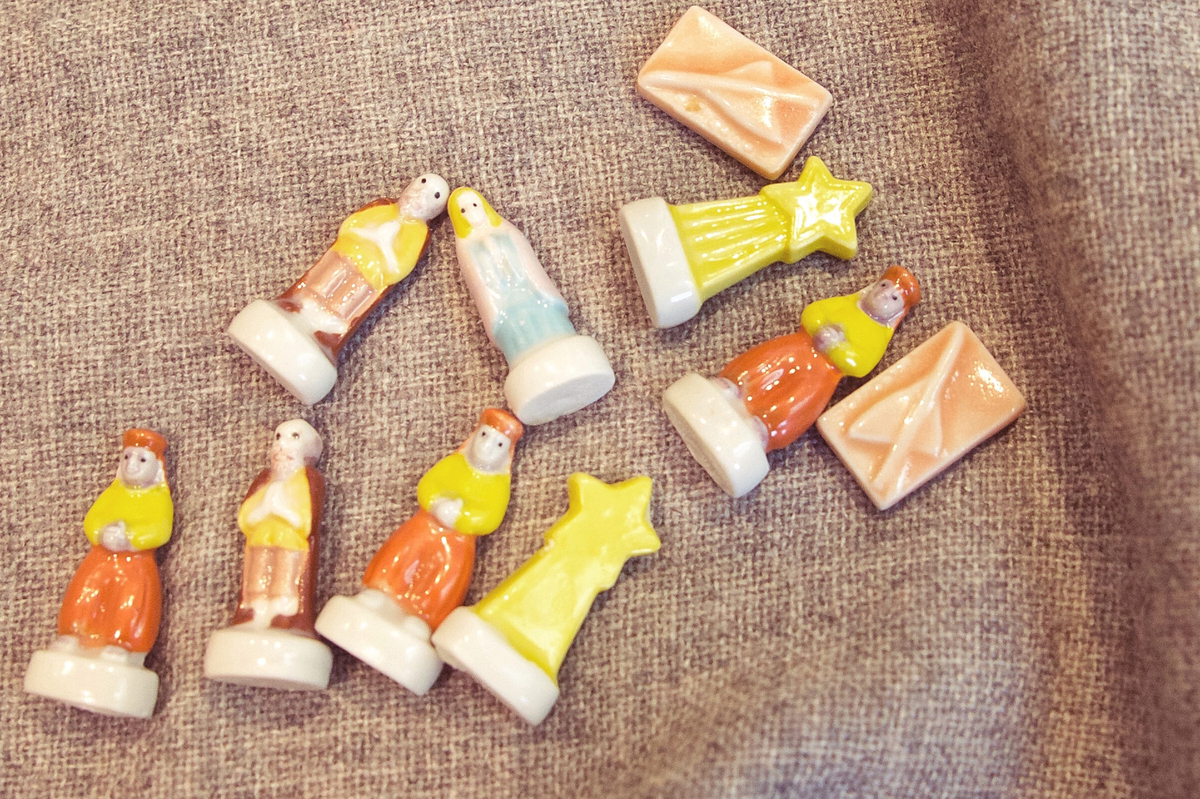 The porcelain figurines inside the cakes are imported from France and range from the biblical to the whimsical. Like baseball cards, some people — called fabophiles — collect them.

The miniature porcelain or enamel figurines, known as fêves des rois, or king beans, come in an impressively wide array of colors, shapes and themes, ranging from the biblical, such as the wise men or the Virgin Mary, to the whimsical, such as soccer balls and cartoon figures. These are sourced from suppliers in France. Like baseball cards, they can be collected, and the people who do so are known as fabophiles. The fêves are indeed so delightful, I think I may become a fabophile myself!

The frangipane filling and pastry have already been prepared when I arrive to meet Faure, so we whisk up to the patisserie school's third-floor kitchen, where he demonstrates the process.

Faure, who sells about 700 galettes during the month of January, makes his filling with top quality butter, icing sugar, ground almond powder, eggs, rum, and the zest of a lemon or orange "to give it a nice perfume." The butter for the pastry must come from Normandy, the best, according to the internationally renowned pastry chef who has received the American Academy of Hospitality Sciences award for "Best Pastry Chef in the World" as well as the prestigious Five Star Diamond Award.

Despite being an innovative chef who experiments with interesting flavor combinations, Faure draws the line when it comes to holiday traditions like the galette: "Not before January 1st — at least! And it really shouldn't be served until the Sunday before Epiphany. It's got to be fresh, not frozen, so it shouldn't be prepared too far in advance."

Pastry chefs here do whatever, whenever," he laments, adding that it's the same with seasonal fruit desserts. "You make a fraisier when the strawberries are in season, in July, not year-round."

This year I'm looking forward to celebrating Epiphany with my family for the first time in several decades. We'll have a lovely dinner followed by a galette des rois on Jan. 6 — and not a day earlier!

Elizabeth Warkentin is a freelance writer and photographer based in Montreal. She has written for National Geographic Traveler, BBC Travel, the Globe and Mail, the Independent, the Boston Globe, and the Toronto Star. You can follow her on Instagram at @lizwarkentin.