Accessibility links
DACA's Cloudy Future Casts A Shadow On A Young Chef's Dream : The Salt Alfonso Verdis came to the U.S. from Mexico at age 15, working his way from dishwasher to chef in an industry that relies heavily on immigrant labor. But his DACA status in the U.S. will soon expire. 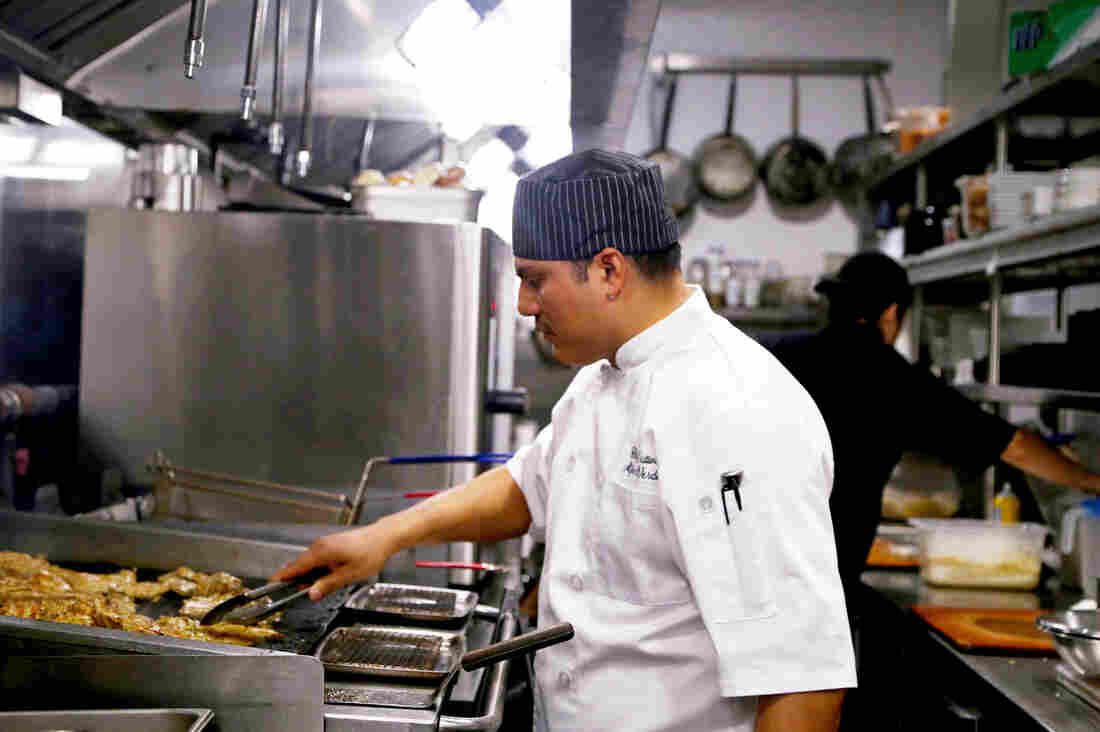 Alfonso Verdis came to the U.S. from Mexico at age 15, working his way from dishwasher to executive chef in an industry that relies heavily on immigrant labor. But his DACA status in the U.S. will soon expire. Rachael Bongiorno for NPR hide caption 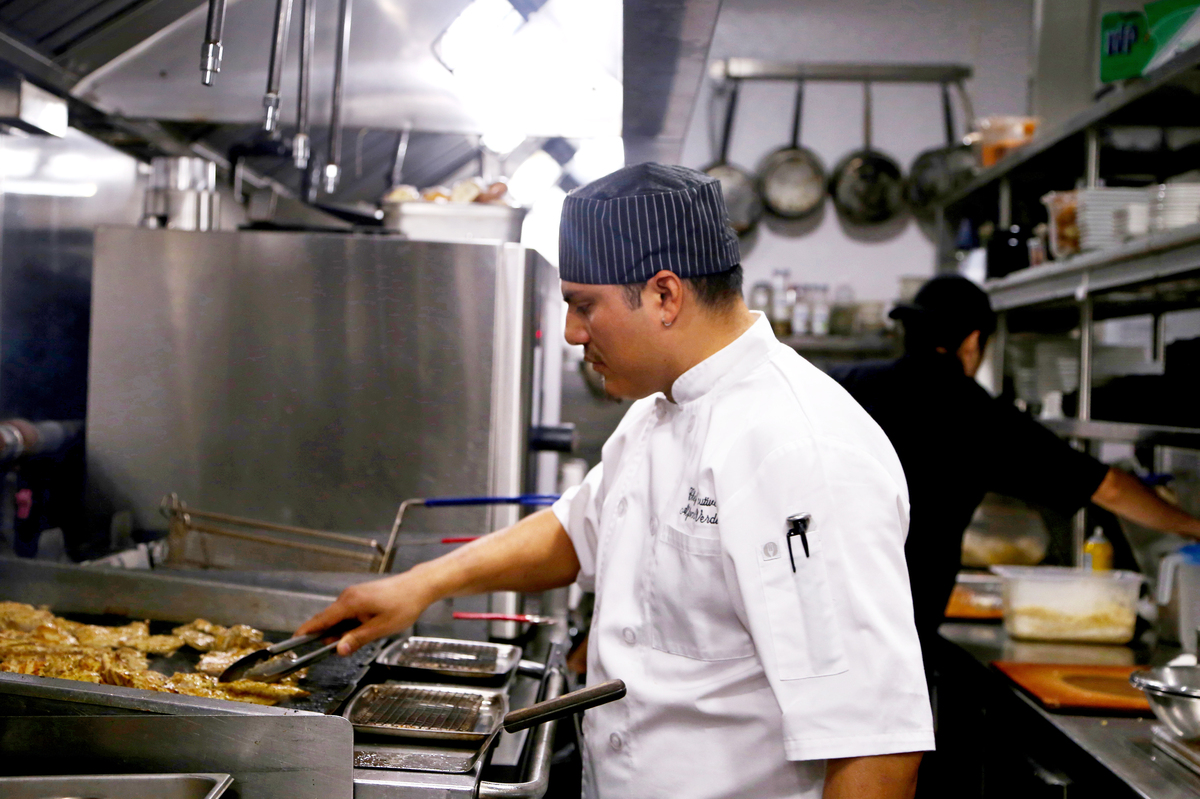 Alfonso Verdis came to the U.S. from Mexico at age 15, working his way from dishwasher to executive chef in an industry that relies heavily on immigrant labor. But his DACA status in the U.S. will soon expire.

Alfonso Verdis' first job was selling vegetables on the streets of Tlapa in Guerrero, Mexico. He was 9 years old, trying to support himself after his mother's death.

"It was hard for me," he recalls. "I decided to come to [America] for that reason. I didn't want to be doing that my whole life." Six years later, at age 15, Verdis arrived in New York City, but food remained his livelihood.

At first the only people he knew were his two sisters, but they were busy supporting their own young families. Eventually a friend's brother found him a job in a restaurant.

"That was one of the first options I had here [without legal papers]," he said.

Initially, Verdis worked as a dishwasher, and he remembers watching the cooks on the line and dreaming of becoming a chef. "Ever since I started I said, 'This is for me. This is what I like to do,' " he says.

After six months of washing dishes at the Viceroy, Verdis' boss at the time, chef Gregory Baumel, promoted him to be a line cook.

"One day [Verdis] was lugging up a big thing of dishes ... and he stopped me in the middle of the stairs and he just said, 'I want to be a chef. I don't want to wash dishes,' " Baumel recalls. "He started cooking the next day."

But because he is undocumented, Verdis' career options were limited.

"I was cooking in a lot of different restaurants," he said. "But I was only able to work up to [be] a sous chef. That was the last option I had without papers."

Deferred Action for Childhood Arrivals — a program introduced by the Obama administration that allows people who came to the United States as children without legal papers to live and work here legally — opened up new career possibilities for Verdis.

He applied for DACA in 2013 and received his work permits in 2014. Four years ago he joined Sanfords, a beloved neighborhood restaurant in New York City's Astoria neighborhood, as an executive chef. Now Verdis manages almost 60 employees and presides over a menu that combines Asian, Mexican, Italian and French influences.

After 20 years working in New York restaurants, Verdis' next big dream is to open a restaurant of his own.

"It's going to be really good Mexican food. It's going to be one of the best places in New York City, with authentic Mexican [cooking]," he says. "My sisters cook really well, and my wife is a good cook. I want to involve my whole family. It's everybody's dream to have our own business."

But now, the fate of the program that allows Verdis to pursue his American dream faces an uncertain future. In the fall, President Trump announced he would end DACA, putting more than 800,000 undocumented immigrants who arrived in the U.S. as minors at risk of being deported. DACA recipients must renew their permits every two years, and Verdis' permit is set to expire in September.

DACA was set to expire March 5, but on Tuesday a federal judge issued an injunction blocking the Trump administration from ending the program's protections until various legal challenges can play out. The administration says it will challenge the judge's ruling and that Congress, not the courts, should decide the program's future.

"I try not to think about it [being deported]; I'm trying to concentrate on what I am doing now," says Verdis. "I know they [the government] are going to do something for us, they have to do something. We are not doing anything wrong here. We're just working; we need the opportunity."

For now, Verdis has set aside his dreams of opening a family restaurant. Instead, he tries not to worry about being forced to return to Mexico.

"I don't have anything in Mexico. My whole career I did here. All my friends are here, a lot of my family is here," he says. "You already proved you want to be part [of this country] and you already did everything [that] they asked you to do. What else can I do?"

And Verdis isn't the only one who would be affected if he is deported to Mexico. His wife and their children — ages 12, 6 and 2 — would move with him.

"My bigger son always tells me, 'What are we going to do if we go [to Mexico]?' " he says. "What's going to happen to my kids? Where I come from [in Mexico] right now it's very dangerous, and I don't want to bring my family to that place."

Verdis says he knows other DACA recipients who face the same dilemma.

"A lot of people are suffering right now, people who have kids especially," he says. "They do not have anybody in Mexico or other countries [where they're from originally]. So what are they going to do [if they are deported]?"

"This whole thing [rescinding DACA] is very troubling to me," says Baumel, who stays in touch with Verdis even though they no longer work together. "You're going to decimate certain industries, and on so many other levels, it's wrong. These are good people."

The restaurant industry relies heavily on immigrant workers. According to Restaurant Opportunities Centers United, an advocacy organization, nearly 1 in 4 workers in the industry is foreign-born. Based on estimates from the Pew Hispanic Center, ROC suggests that half of these workers may be undocumented. Additionally, 16 percent of immigrants with DACA status are employed in food preparation and serving — more than in any other U.S. industry.

According to Teófilo Reyes, national research director at ROC, rescinding DACA will affect workers in the restaurant industry across the nation.

"It will mean that all those people will have to go back into the shadows," Reyes stated. "It makes work more unstable. It increases the possibility of abuse by the employer, and it can also lead to lower wages."

Despite his fear of deportation, Verdis says he doesn't regret applying for DACA.

"I want to be part of this nation," he said. "I'm a dreamer. I have a lot of dreams for my life and thanks to [the owners of Sanfords], I am here working."

This story is a collaboration with Feet in 2 Worlds. A version of this story originally appeared on the Fi2W website on Dec. 12, 2017, with the title "Ending DACA Casts a Shadow on a Young Chef's Dream."