Accessibility links
Montana Barley Fields Become Front Line For Climate Change And Beer : The Salt Barley, the "king of malt," needs a precise recipe of water and sunshine to thrive — too much of either will cause it to wither and die. And amid a changing climate, that's exactly what's happening. 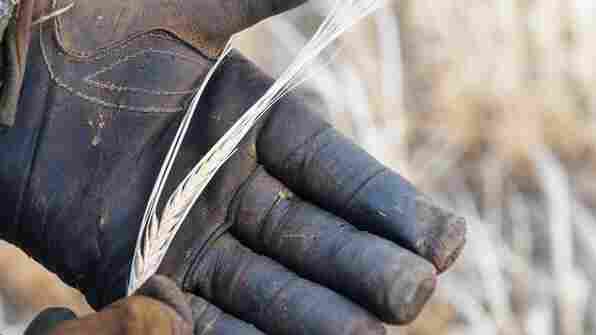 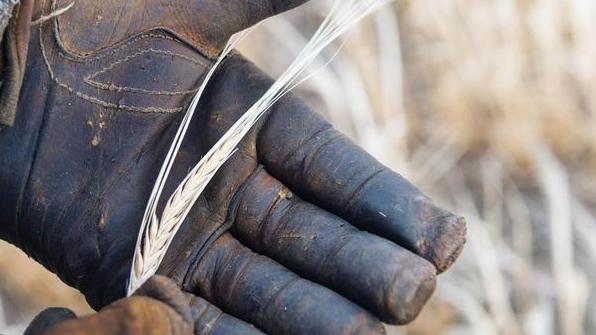 A head of poor-quality malt barley taken directly from a field in Power, Mont. Heat and a lack of water resulted in small and light kernels. Grain rejected for malt barley often ends up as animal feed.

A bumper sticker spotted in Montana reads, "No barley, no beer." It's a reminder that Montana's barley farmers are struggling. Barley is an unforgiving crop that needs a precise recipe of water and sunshine to thrive — too much of either will cause it to wither and die. And amid a changing climate and unpredictable seasons, that's exactly what's happening.

Food and climate reporter Ari LeVaux (@AriLeVaux) joins Here & Now's Robin Young to talk about his recent article on the issue, reported in collaboration with The Weather Channel and the Food & Environment Reporting Network.

On visiting Montana barley fields during a flash drought

"In this case, [the fields] were dried up about two months early. That particular field had a dry-farmed crop of barley. We had to make a distinction in Montana between irrigated barley, in which the grower can turn the water on when necessary, and dry-farmed, in which the crop is planted and then hopefully harvested at the end of the season, but not much is done in between. So that dead field was a dry-farmed field that dried up in the flash drought of 2017. May and June were nice and wet, and all of a sudden the water stopped and the heat set in, and just did not relent, and by the time I made it out there, this was about three weeks into the flash drought and the barley was starting to die."

"I was actually sitting in the bar in the heat of the afternoon, it was way too hot to be outside, and smoky, so all the barley farmers were in Les' Bar in downtown Power, [Montana], population 171, and Brad Schaefer walked in looking a little shell-shocked. He had just taken some of his crop to the local grain elevator to have it evaluated, and they told him, 'Really not looking too good. It's mostly thins and mids' — mids and thins being the two smaller ends of the barley spectrum. Plump is what you want, and there were not any plumps. The only value in his crop was as feed, less than half the value of barley for the malt market."

On how the farmers talk — and don't talk — about climate change

"It's still a taboo subject in red-state America. Nobody wants to use it, even though they see it happening all around them. So they come up with different ways of talking about what's happening around them, like, 'The weather sure is different,' or 'unseasonable,' or 'Mother Nature is really effing with us.' Maybe you could say, 'Well, the climate's kinda changing a little bit.' But you couldn't say 'climate change.' "

"Especially the younger farmers. As for why they don't actually talk about it with each other, it's an interesting question." 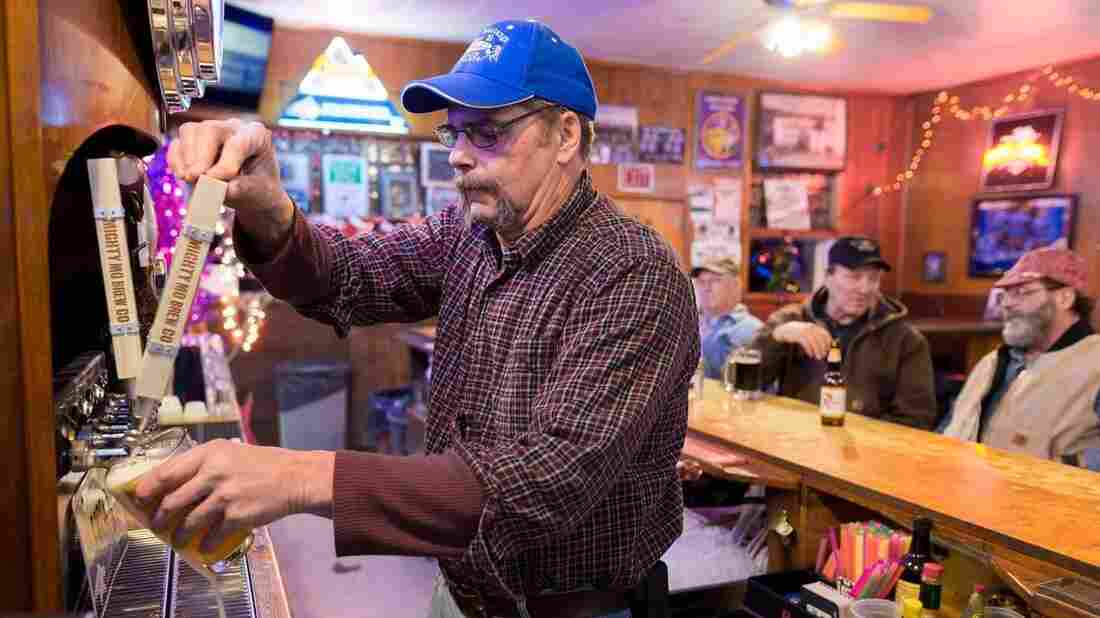 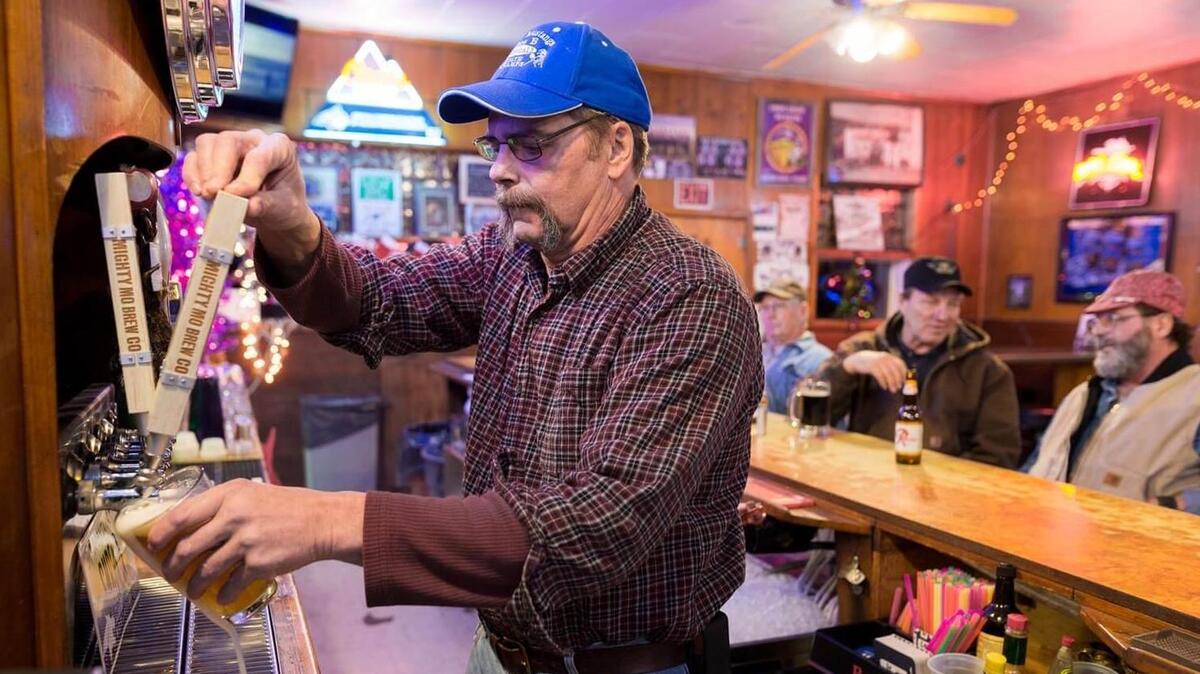 Tracey Somerfeld at Les' Bar drafts a pint of local craft beer. He still farms barley when he's not helping his son run the bar.

On how an extreme storm in 2014 impacted barley growing

"Everyone I spoke with for this story, whether they're farmers in Montana or academics in the Midwest or bureaucrats or barley lobbyists, everyone has a story to tell about that storm of 2014. The value of barley is that it is malted, and that malt is what is used to make beer. And the malting is a process whereby you start the germination, you basically sprout the seeds, and just as they start to sprout, you halt it with heat in a kiln. That short period of germination has allowed the conversion of starches into sugars in the seeds. Any grain will malt — you can malt rice, you can malt wheat, you can malt corn. But barley malt's the best. There's actually a profession called 'maltster,' and the maltsters prefer barley above all others for malt, because it germinates the most evenly and predictably. So barley is the king of malt.

The problem with germinating so easily is that, if the crop is ripe in the field ready for harvest, if rain comes at the wrong time, then the whole crop can sprout in the field. That's useless to a maltster. They like it all inside and controlled. That's what happened in 2014. Everyone's barley was ready for harvest, and all of a sudden this storm came out of nowhere and ripped up the Rocky Mountain Front all the way from Idaho up into Canada, straight through the heart of malt barley country, and just whacked the entire crop."

"Barley is already a climate refugee of sorts, in that it became so hot and humid in the Midwest that it didn't produce as well. Meanwhile, corn and soy began producing better and better. So the corn and the heat and the humidity drove barley west. It stayed in the Dakotas for a while, and then the Dakotas also got too hot and humid. So barley kept migrating west until it hit the Rockies, and now there is no more west to go. For a while, anyway."

This segment aired on Jan. 8, 2018 on WBUR's Here & Now in Boston. Produced with the Food & Environment Reporting Network, the original article first appeared on The Weather Channel.