Accessibility links
Turning Soybeans Into Diesel Fuel Is Costing Us Billions : The Salt The law that requires America to turn some of its soybeans into diesel fuel for trucks has created a new industry. But it's costing American consumers about $5 billion each year.

Turning Soybeans Into Diesel Fuel Is Costing Us Billions

Turning Soybeans Into Diesel Fuel Is Costing Us Billions 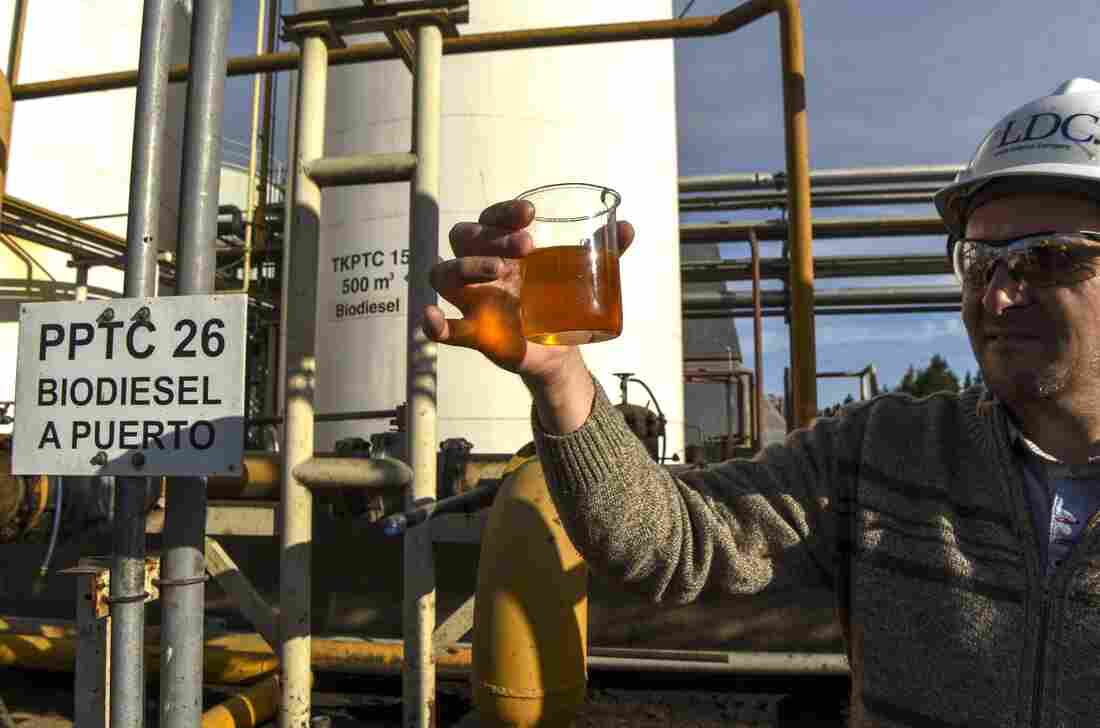 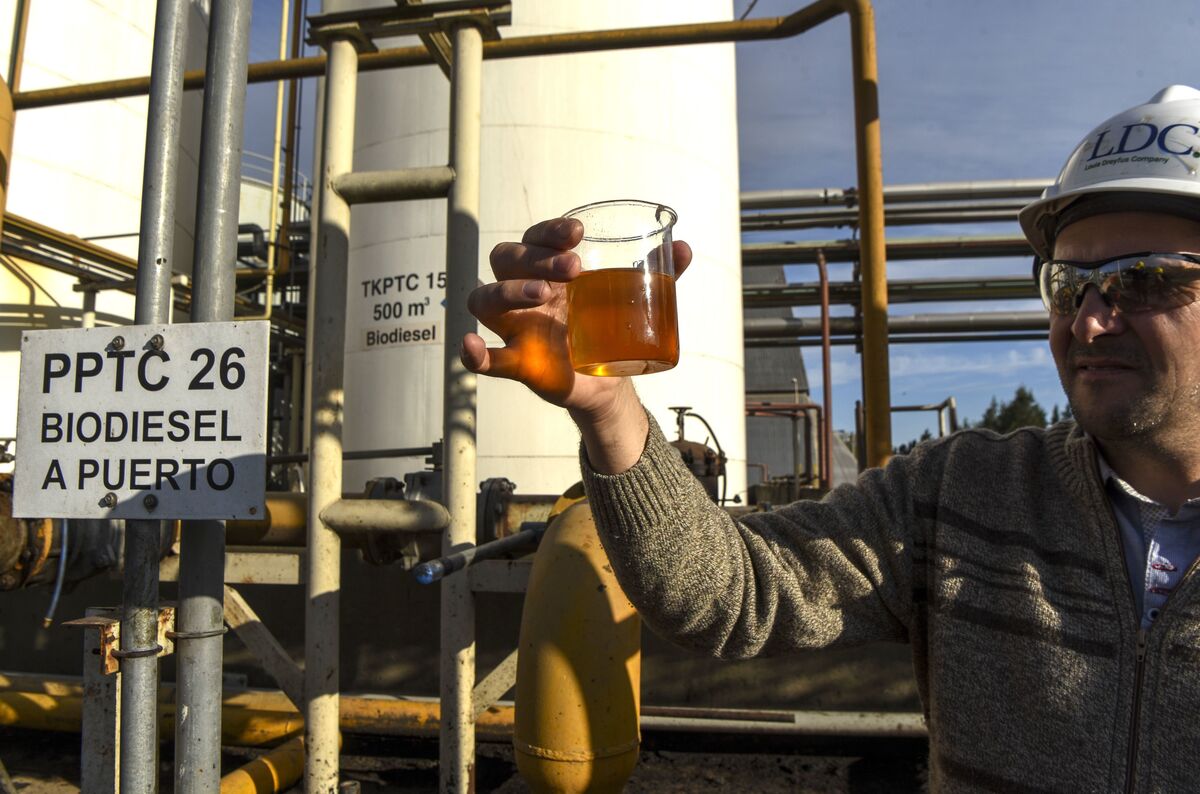 An engineer shows a sample of biodiesel at an industrial complex in General Lagos, Santa Fe province, Argentina. The United States recently imposed duties on Argentine biodiesel, blocking it from the U.S. market.

This year, trucks and other heavy-duty motors in America will burn some 3 billion gallons of diesel fuel that's made primarily from vegetable oil. They're doing it, though, not because it's cheaper or better, but because they're required to, by law.

The law is the Renewable Fuel Standard, or RFS. For some, especially Midwestern farmers, it's the key to creating clean energy from American soil and sun. For others — like many economists — it's a wasteful misuse of resources.

And the most wasteful part of the RFS, according to some, is biodiesel. It's different from ethanol, a fuel that's made from corn and mixed into gasoline, also as required by the RFS. In fact, gasoline companies probably would use ethanol even if there were no law requiring it, because ethanol is a useful fuel additive — at least up to a point. That's not true of biodiesel.

"This is an easy one, economically. Biodiesel is very expensive, relative to petroleum diesel," says Scott Irwin, an economist at the University of Illinois, who follows biofuel markets closely. He calculates that the extra cost for biodiesel comes to about $1.80 per gallon right now, meaning that the biofuel law is costing Americans about $5.4 billion a year.

Irwin explains that use of biodiesel is driven by three different parts of the Renewable Fuel Standard. The law includes a quota for biodiesel use, but in addition to that, biodiesel also is used in order to meet the law's demand for "advanced biofuels." Finally, there's an overall quota for biofuels of all sorts, and companies are using biodiesel to meet that quota as well because they've run into limits on their ability to blend ethanol into gasoline.

Defenders of biodiesel insist that it's a much cleaner fuel than regular diesel, because it doesn't come from the ground, but from plants — mainly soybeans — that capture carbon dioxide from the air as they grow. In fact, by the EPA's calculations, replacing petroleum-based fuel with biodiesel will cut greenhouse emissions at least in half.

A growing number of environmentalists, however, say that this calculation is dead wrong. They say that if more soybeans are needed to make fuel in addition to food, it inevitably means that people somewhere on Earth will have to plow up grasslands or cut down forests in order to grow that additional supply — and clearing such land releases huge amounts of carbon dioxide into the atmosphere.

Investigators from the two groups documented widespread clearing of Argentine forests in order to expand cultivation of soybeans. Simultaneously, Argentina expanded its exports of soybean-derived biodiesel to the United States. In 2016, in fact, Argentina shipped more than 400 million gallons of biodiesel to the U.S., equivalent to almost 15 percent of all the biodiesel that Americans consumed.

The story, however, is more complicated than it seems. For one thing, that boom in Argentine biodiesel exports is over, at least for now. Last summer, the United States accused Argentina of subsidizing its biodiesel producers and "dumping" cheap biodiesel on the world market. In retaliation, the U.S. imposed hefty taxes on all biodiesel from Argentina. Overnight, those imports ceased. Americans now will have to rely on biodiesel produced here in the U.S. — which also is more expensive. (In a way, Argentina was doing the U.S. a favor, helping it satisfy its biodiesel demands more cheaply.)

In addition, the most powerful factor driving demand for soybeans these days is China's appetite for soy meal, to feed its pigs and chickens, rather than America's need for soy oil to make fuel.

"The big story is China's demand," says Irwin of the University of Illinois. "If anything is related to tearing up pastures in Argentina to grow soybeans, it's China and not biodiesel."

In fact, China wants so much soy meal that it's boosted global supplies of soy oil, because soybeans, when they're crushed, yield both meal and oil. By satisfying China's demand for meal, soy processors inevitably end up with plenty of oil to sell, too. (Interestingly, this is a reversal of the situation a century ago, when soybeans were mainly grown for their oil, and producers struggled to find uses for the meal.)

A previous version of this story stated that Americans will burn 3 billion gallons of diesel fuel made from soybean oil this year. In fact, some of that biodiesel will be made from other oils, including corn oil, canola oil and recycled cooking oil.