Accessibility links
Concerns Grow That Infections From 'Zombie Deer' Meat Can Jump To Humans : The Salt Chronic Wasting Disease, a deadly neurological disorder similar to Mad Cow, has been detected in 24 states. So far it has posed no risk to people, but a new Canadian study has prompted more testing. 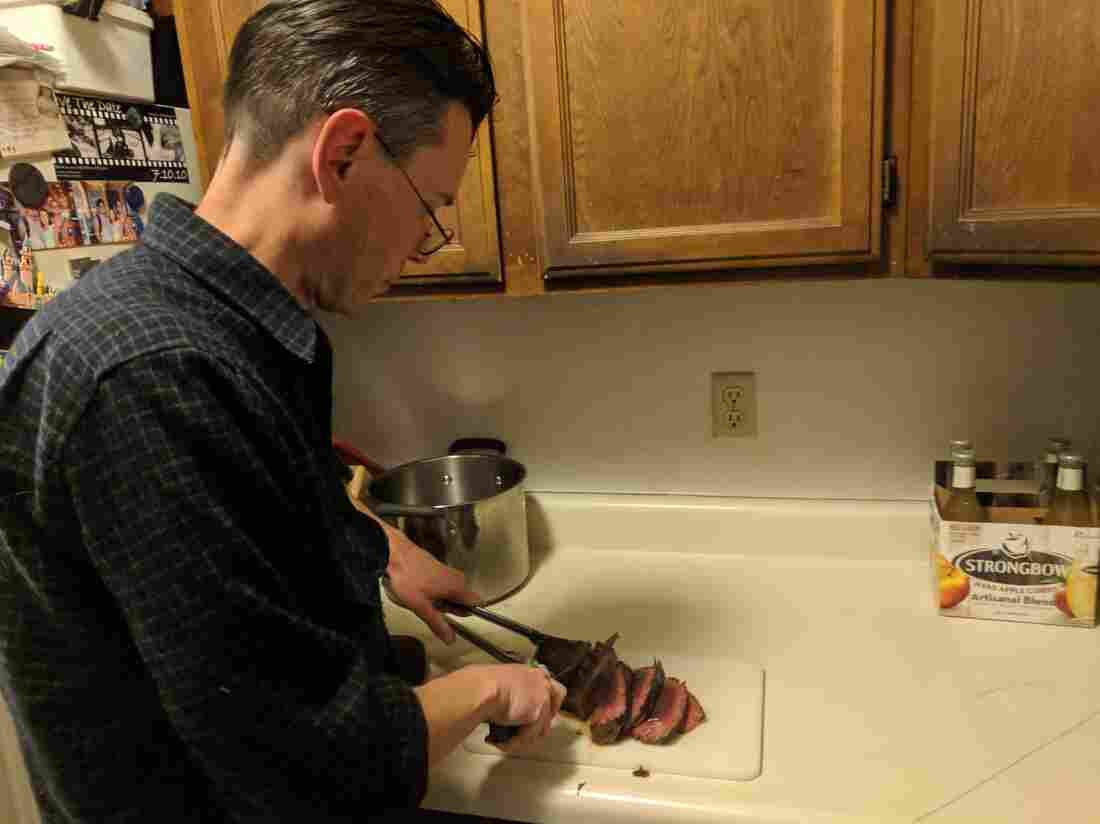 Patrick States slices into a venison steak at his home in Northglenn, Colo. Officials are asking hunters to have their kills tested before consuming the meat. Sam Brasch/Colorado Public Radio hide caption 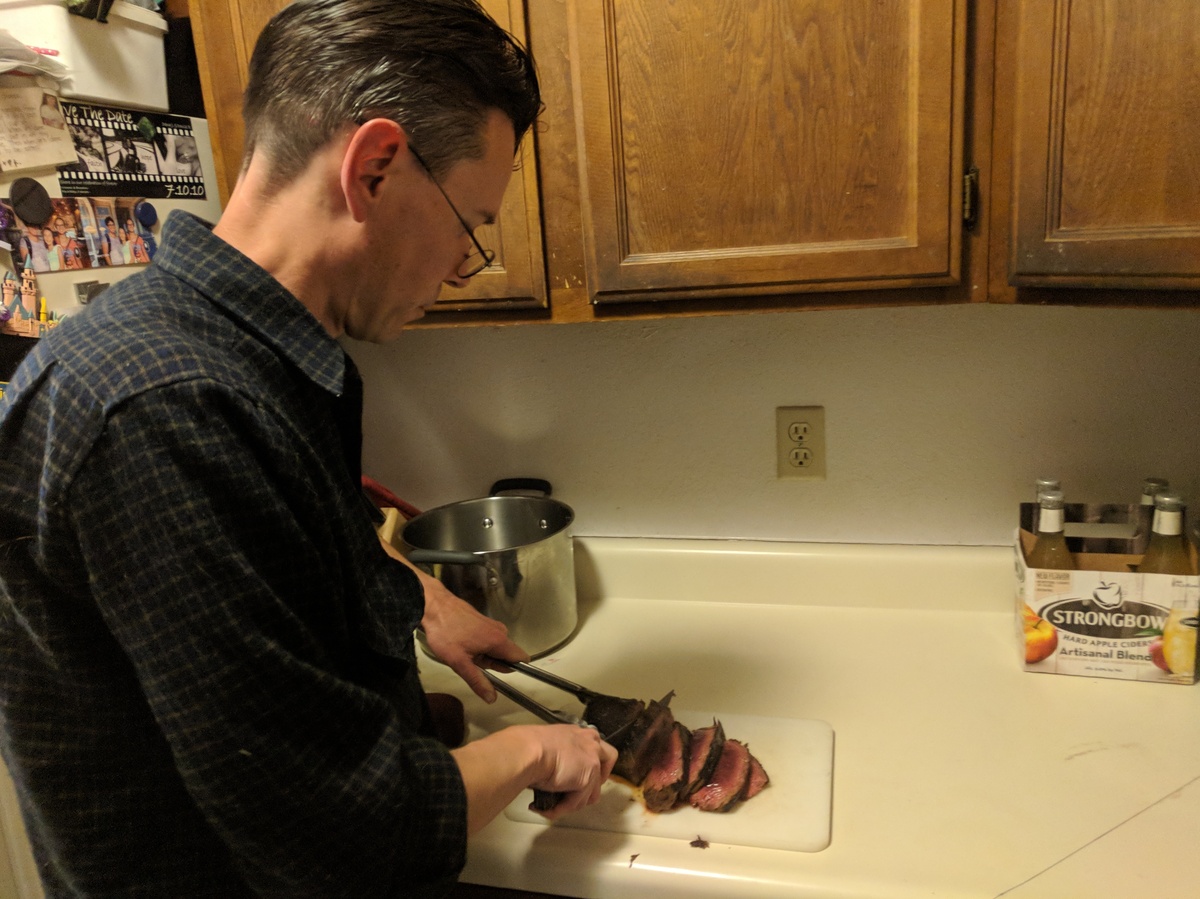 Patrick States slices into a venison steak at his home in Northglenn, Colo. Officials are asking hunters to have their kills tested before consuming the meat.

Would you eat venison if there was a chance it could slowly eat away at your brain?

If there's a slight possibility, it doesn't bother Patrick States. On the menu this evening for his wife and two daughters at their Northglenn, Colo., home are pan-seared venison steaks with mashed potatoes and a whiskey cream sauce.

"We each have our specialty, actually," says States as the steak sizzles. "The girls made elk tamales this morning, but we use [venison or elk] in spaghetti, chili, soup, whatever."

The States take pride in skipping the butcher counter at the grocery store. The red meat on their table almost always comes from wild game hunted in Colorado, a source they see as more organic than anything wrapped in Styrofoam and plastic.

Tonight's deer came from outside the northwestern town of Craig. The area has a low-prevalence of Chronic Wasting Disease, a deadly neurological disorder similar to Mad Cow that's found in deer, elk and moose.

First observed among captive mule deer in Fort Collins in 1967, CWD has since infected wild herds in 24 states and Canada. It has also been found in South Korea and Norway. In that time, there's been no report of human illness due to CWD exposure, but a recent Canadian study has renewed concerns that the disease could make the jump.

Colorado Parks and Wildlife asks hunters to test kills from certain areas affected by CWD. If an animal comes back positive, they recommend hunters avoid any risk by tossing out the meat before it's eaten.

Patrick States tested a sickly-looking elk in the past and threw out the meat when it came back positive. But he opted not to test the deer now on his dinner plate.

"The deer was a big healthy animal and there was a really low percentage [of CWD] in the area," he says. "It's just not something I worry about."

Cracks in the species barrier

Matt Dunfee, head of the Chronic Wasting Disease Alliance in Fort Collins, Colo., has heard that sort of reasoning from hunters before. He calls it "absolutely wrong."

"The vast majority of the time hunters find out their animal has CWD, they're shocked, because it looked great," he says. "It was moving just like everything else. It had great body fat." 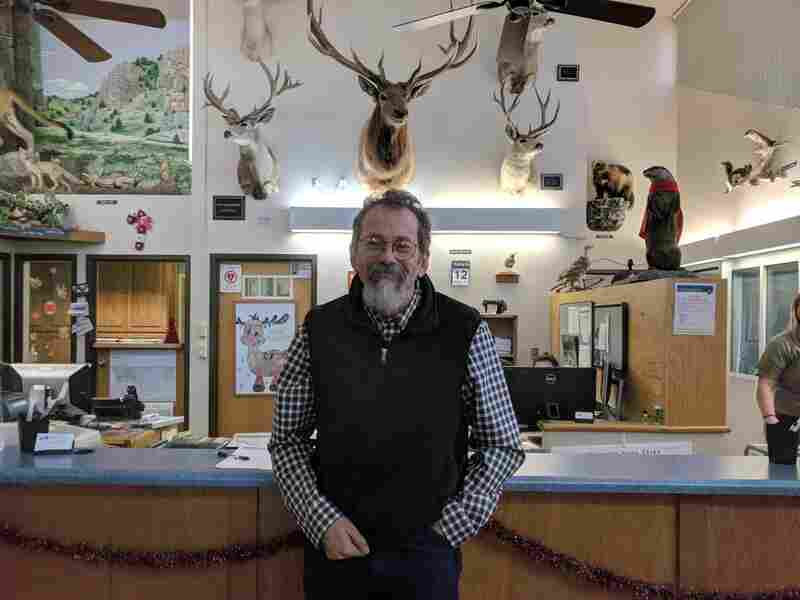 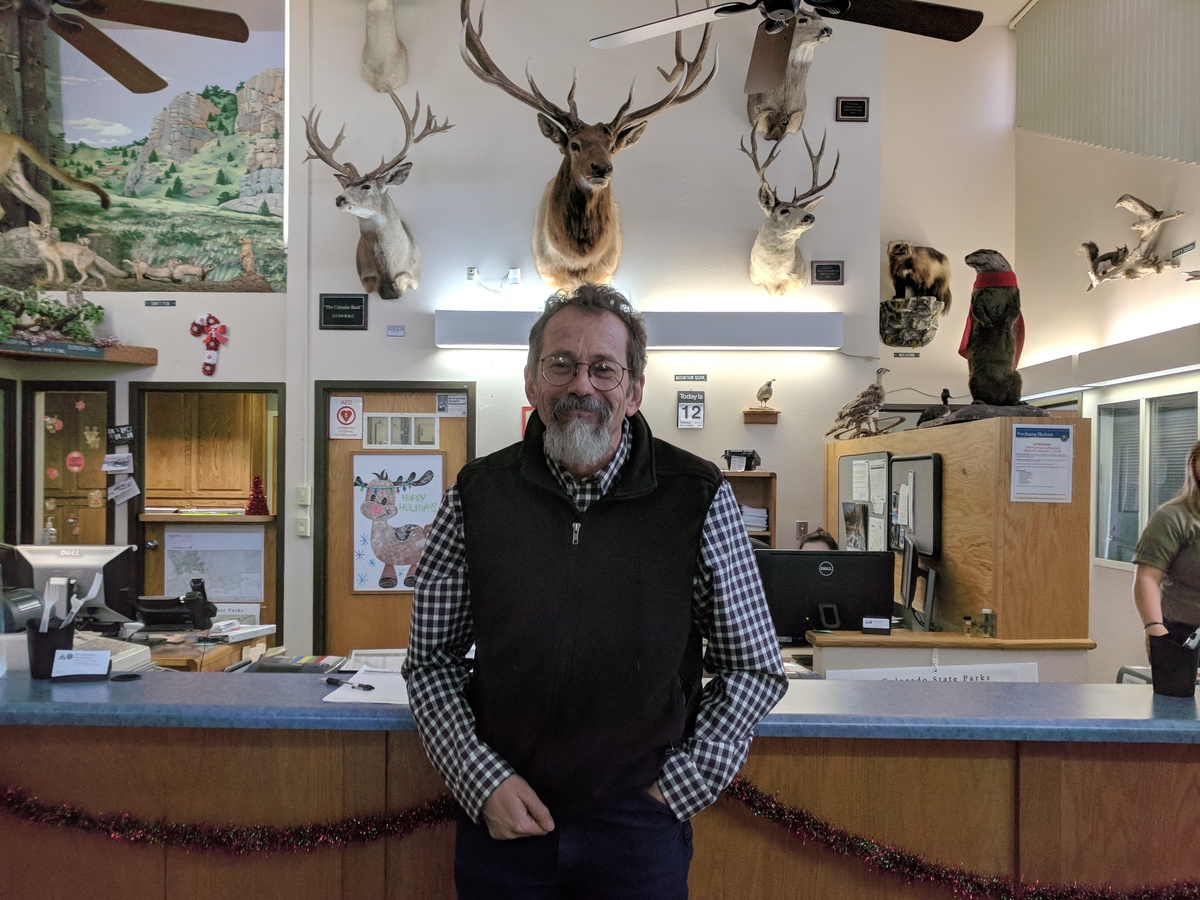 Michael Miller, senior wildlife veterinarian for Colorado Parks and Wildlife, has released data showing that mule deer submission to Chronic Wasting Disease more than tripled near the end of 2017.

The reason has to do with the speed of the disease. A CWD-infected animal can live for two years before showing signs, like a vacant stare or exposed ribs. Predators or car accidents tend to remove infected animals first, according to Dunfee.

What's trickier is explaining why hunters should worry at all. As Dunfee acknowledges, scientists have found no conclusive proof that infected meat has harmed people.

That evidence, or lack of it, suggests a strong "species barrier" between deer and humans.

CWD passes from animal to animal through prions, misfolded proteins that cause other proteins to misfold around them. Different prion diseases tend to only harm certain species, but can evolve to overcome those limitations.

For instance, Mad Cow emerged in the UK in the mid-1980s after cattle ate the bone meal of sheep infected with scrapie, a similar brain-wasting disease. The disease then made the jump to people through infected beef products, causing a new variant of Creutzfeldt-Jakob Disease.

Such a change has yet to happen with CWD. So far, its path of destruction appears to have stopped at the human body.

A new study has heightened concerns. Canadian researchers found that macaque monkeys contracted CWD after eating infected deer. The results mark the first time the disease has been shown to spread to a primate through meat, rather than through a direct injection of CWD prions into the nervous system.

"While most research shows there's a robust species barrier, this recent study showed that barrier might not be quite as robust as we once thought," Dunfee says.

Research by Mark Zabel, the associate director of the Prion Research Center at Colorado State University, has found the agents behind the "zombie disease" are highly susceptible to change — and are likely still evolving.

Zabel points out that scientist have only known about CWD for 50 years, "which leads us to believe it's only a matter of time before a prion emerges that can spread to humans."

During the past hunting season, Colorado Parks and Wildlife required CWD testing for mule deer from certain areas of the state. The goal was to get a clearer picture of the spread of the disease.

To comply with the requirement or volunteer animals for testing, hunters deliver deer or elk heads to state wildlife offices. One such head was in a refrigerator at the Colorado Parks and Wildlife office in Fort Collins. A taxidermist had already removed the skin, which made the job easier for volunteer Aaron Schmitt.

Schmitt flips the head over on a white plastic table and works a scalpel into the crevice between the neck and the chin. He then carefully removes two gray lymph nodes. The organs serve as early reservoirs for CWD prions and will be sent to a lab for testing.

Mule deer submission had more than tripled near the end of 2017, according to data provided by CPW senior wildlife veterinarian Michael Miller. The success allowed the state to publish more precise maps on CWD prevalence.

The maps show that CWD continues to have a strong presence in Colorado, its original epicenter. The news means further pressure on the state's herds of deer and elk, which could eventually lead to long-term population declines.

Public health officials also monitor Colorado's human population for diseases related to CWD. Since the disease has been known to exist in northern Colorado and southern Wyoming longer than anywhere else, epidemiologists watch for any occurrence of human brain-wasting diseases, like Creutzfeldt-Jakob Disease.

Between 1979 and 2000, the CDC did not find a concerning increase in disease rates in the area. Cases matched rates in other parts of the country and did not appear to affect younger victims. The results suggest rising rates of CWD during the 21-year period did not impact human health.

The Colorado Department of Public Health and Environment continues to monitor for Creutzfeldt-Jakob Disease deaths across the state. Since 1998, it reports there have been 72 cases confirmed by brain examinations. Some families choose not to have the procedure, so the agency estimates 42 additional probable cases in that period.

If the estimates are combined, the highest number of CJD cases in a year is 10, which is in keeping with expectations for Colorado's population. The prevalence of hunters among the victims is also at or below the general population.

Nationwide, there has been an 85 percent increase in CJD cases from 2002 to 2015 — something national health officials chalk up to better monitoring efforts and an aging population.

Dunfee says such results are encouraging, but are not definitive proof that people are safe. A strain could be steps from vaulting the species barrier between deer and people.

But if it ever did, Dunfee says his advice to hunters would be the same:

"If you are hunting in an area where CWD is found, have your animal tested. If it comes back positive, don't eat the meat."

This story comes to us from member station CPR in Colorado.