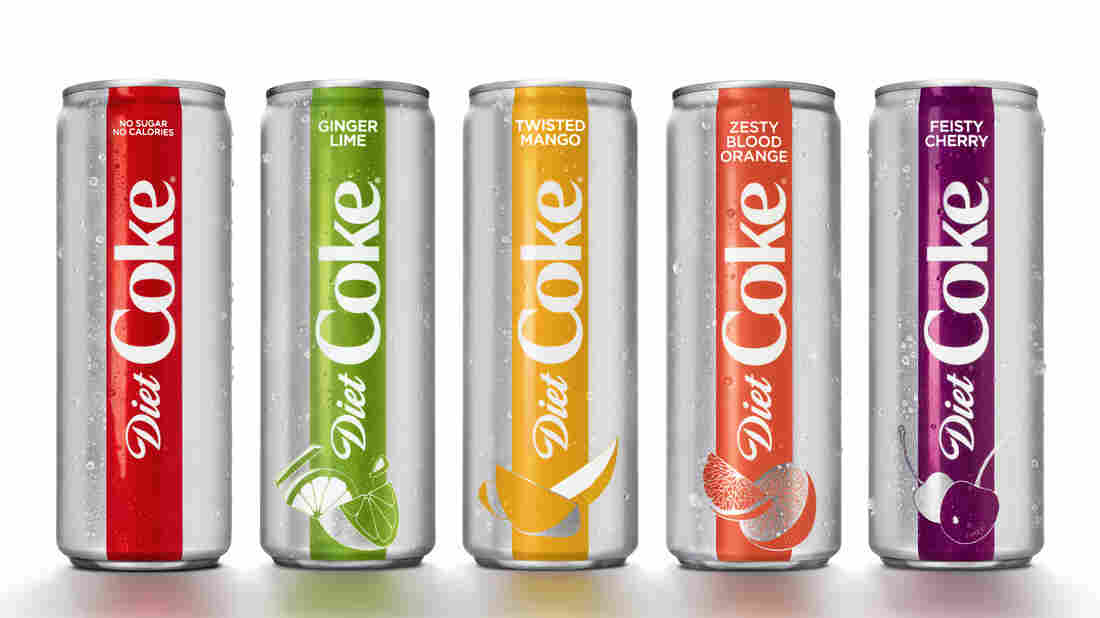 Coca-Cola introduced a slimmer 12-ounce Diet Coke can and four new flavors, including mango and ginger lime. The company said Diet Coke's new look and flavors were aimed to appeal to millennials. Courtesy of The Coca-Cola Co. via AP/AP hide caption

toggle caption
Courtesy of The Coca-Cola Co. via AP/AP Coca-Cola introduced a slimmer 12-ounce Diet Coke can and four new flavors, including mango and ginger lime. The company said Diet Coke's new look and flavors were aimed to appeal to millennials.

Courtesy of The Coca-Cola Co. via AP/AP

The new flavors — Feisty Cherry, Twisted Mango, Ginger Lime and Zesty Blood Orange — are sold in slimmer, redesigned cans. They were launched as part of the beverage company's endeavor to offset slumping Diet Coke sales, which have steadily declined since the height of soft-drink consumption in the mid-2000s.

According to Beverage Digest, while Diet Coke is still the second most popular soda in the U.S. (Coke tops the list), sales of the drink have fallen every year since 2006. Derek Thompson, a senior editor for The Atlantic, told WBUR's Here & Now that the decline is part of a broad shift toward bottled water, flavored seltzer and energy drinks. Thompson calls this latest rebranding a "moment of panic" for the beverage company.

"Everything that people wanted out of Diet Coke up till say 2000 [to] 2005 has essentially just been outsourced to other beverages that seem to be doing the same thing better," he says, in reference to the hydration, energy and fizzy aspects of soft drinks.

The abandonment of Diet Coke highlights a change in American drinking tastes, Thompson says. The amount of bottled water consumed in the U.S. surpassed soda for the first time ever in 2016, according to data from Beverage Marketing Corporation.

Soda consumption has also dropped because more people are now looking to coffee for a caffeine fix. At the peak of soda's popularity, soft drinks outsold coffee by a three-to-one margin in the U.S. By the 2020s, industry analysts predict coffee sales will outpace soda.

Coca-Cola says the new fruit flavors are also an attempt to capture the tastes of young people, who have boosted sales of flavored sparking water, such as LaCroix, Polar and Sparkling Ice, by more than 10 percent each year.

"We're modernizing what has made Diet Coke so special for a new generation," Rafael Acevedo, Coca-Cola North America's group director for Diet Coke, said in a statement. "Millennials are now thirstier than ever for adventures and new experiences, and we want to be right by their side."

The issue may also be less about Diet Coke and more about the health risks of soda in general and artificial sweeteners, Thompson says. Research has shown drinking diet soda every day can put people at a higher risk of stroke and other vascular problems.

"There is a growing consumer focus on health that has hurt soda's domination," he says. "In many ways, the 'diet' in diet soda used to be an attractor. You drank this because you wanted to be thin. But now the concept of a diet cola seems paradoxical and wrong to a lot of today's drinkers."

Coca-Cola is also likely to face challenges in getting current Diet Coke drinkers to try to the new flavors. The company, which alienated customers in 1985 with a reformulated version of Coke, said it tested more than 30 flavor combinations before introducing the new products.

"I am very much a Coke product purist, especially when it comes to Diet Coke," Ayana Lage, a 24-year-old writer from Fort Lauderdale, Fla., told The Wall Street Journal. "The chances of me branching out are slim to none."