Accessibility links
Pork, Shellfish Star In Controversial Jewish Banquet Remembering Historical Event : The Salt Ancient Jewish teachings ban pork, shellfish, and meat mixed with dairy in the same meal. Some modern Jews wanting to evolve the way they eat look to a scandalous feast of the past for inspiration. 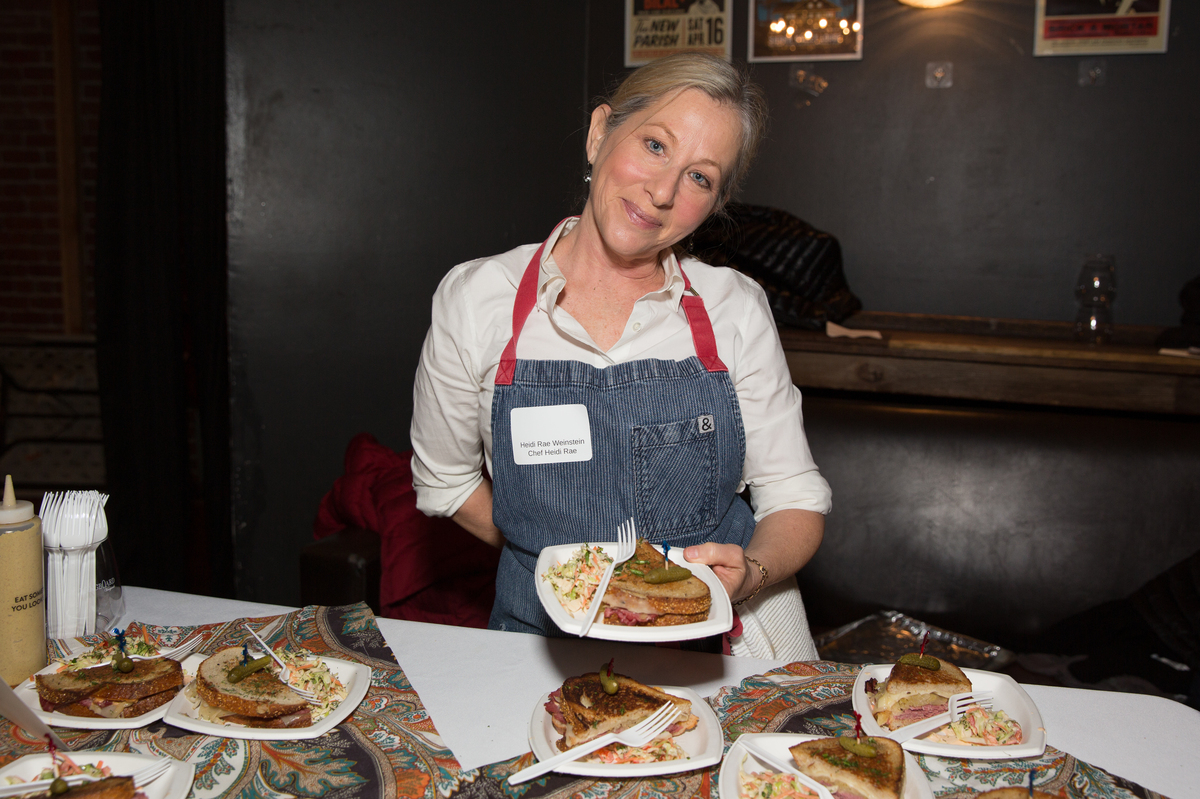 When a journalist and chef made the decision to host a dinner party and invite members of the Illuminoshi (a not-so-secret society of San Francisco Bay Area Jewish food professionals) to eat a meal of pork and shellfish-filled dishes in the name of education, she knew that more than a few people would have some beef with the menu.

An event like that takes lots of, as the Jews say, chutzpah to put on. Which is why Alix Wall prefaced the announcement of Trefa Banquet 2.0 with an apology.

"I can hear the groans coming from a few of you," Wall, the founder of the Illuminoshi, writes in the invitation. "I want to explain that I am not doing this just to be disrespectful by celebrating Jews' love for all things forbidden to us, even though we all know it's real. I thought a celebration of treyf should be accompanied by learning about the real one."

The real treyf (a Yiddish word for non-kosher) was the original Trefa Banquet, a scandalous summer evening in 1883 when a group of newly appointed rabbis of the Reform movement's Hebrew Union College in Cincinnati commemorated their achievements as most do, by treating themselves. Except this treat included nine courses of non-kosher French food — beginning with littleneck clams on the half-shell and ending with a spread of ice cream and cheese for dessert.

The meal became a myth of sorts among the community, thanks to varying accounts of what happened that night. Some American Jews say that several of the newly ordained rabbis, in true Real Housewives style, caused a commotion at the table, then fled the dinner in horror — and kept running until they found a place to start the flagship rabbinical school of the Conservative Jewish movement, the Jewish Theological Seminary, three years later. 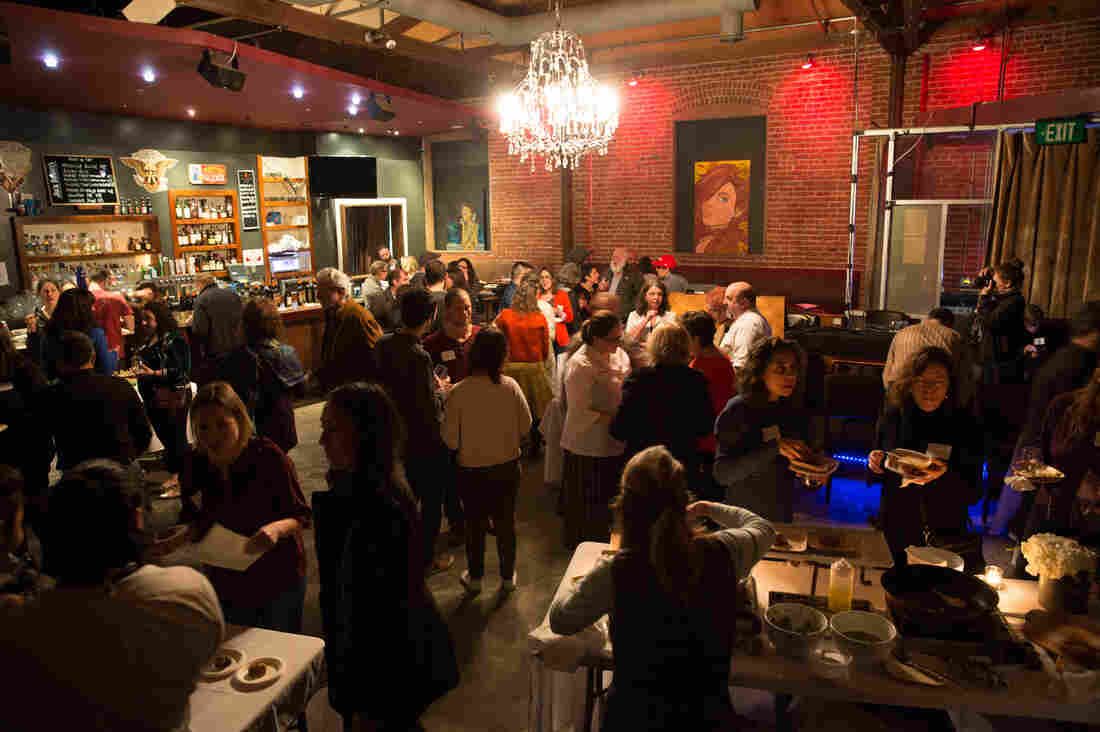 The crowd of diners at the Trefa Banquet 2.0 event. "Today, American Jews remember the [original 1883] meal as a statement about the values of the reform movement," says Rachel Gross, a professor of Jewish Studies at San Francisco State University. Lydia Daniller hide caption

The rules of keeping kosher, or kashrut, are a complex symbol of holiness in the Torah and an example of one's ability to practice discipline during the necessary human act of eating. According to the somewhat confusing Jewish dietary laws, fish with fins and scales can be eaten (hence the ubiquity of lox), but scaleless finned catfish are sinful. Animals with a "split hoof" who "chew the cud," a digestive process that could make you swear-off eating altogether, are all the livestock that are allowed. This means burgers are aplenty but no rabbit or pork in all of their glorious forms.

Cheeseburgers, however, are forbidden. The Torah explains that cooking a calf in mother's milk is prohibited, a rule that later transformed into restricting the consumption of dairy and meat both at the same time and during the same meal (no dairy in your coffee or dessert if you've eaten meat).

Of course, when kashrut laws were created, Moses didn't have the benefit of food safety laws. Which invites the dilemma that America Jews in the last century have faced when it comes to the food they eat. The rules of kashrut are elaborate, and some have argued that the dietary laws were merely given as an example of a time when man must obey God's authority without asking why.

Which is exactly why Reform Rabbi Camille Angel found the treyf 2.0 event to be kosher in her book. "I don't keep kosher at home, so the opportunity to be part of an educational gourmet evening out with community is compelling and fun," explains Angel, the daughter of a lobster-eating Reform rabbi. "Many people here didn't know about this historic moment in the the Reform movement. We were radical then, and we continue to push the boundaries of progress now. You can be Jewish and modern, whether or not you keep kosher." 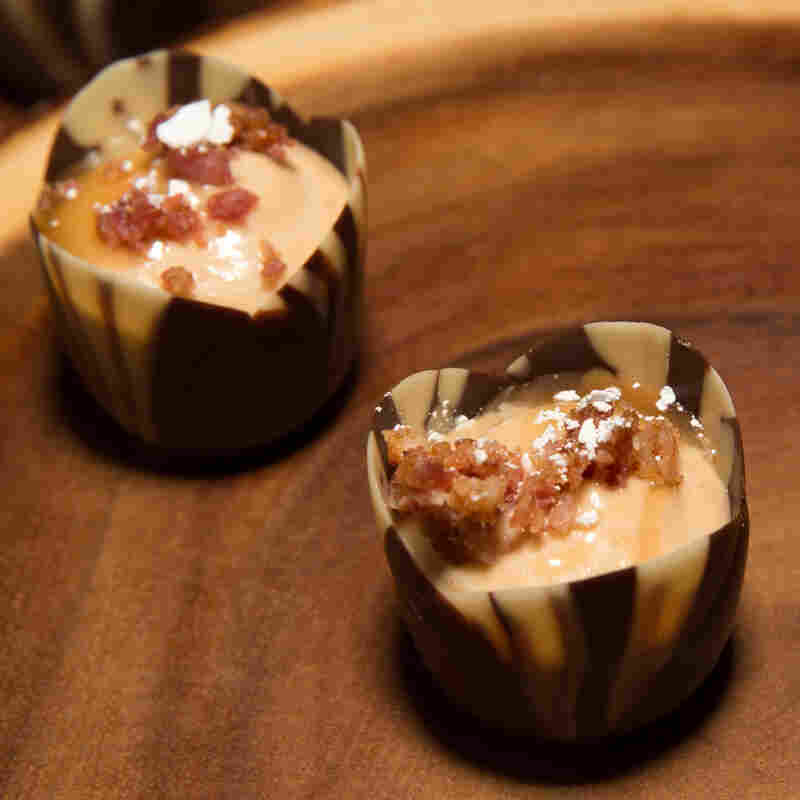 Back at the original banquet, no pork was served, although there was plenty of shellfish. According to Rachel Gross, a kosher-keeping professor of Jewish Studies at San Francisco State University who was a keynote speaker at the Trefa Banquet 2.0, the lack of pork suggests that the menu was a snapshot of what most American Jews ate in the late 19th century, practicing selective kashrut because there was no standardized oversight of kosher meat at that time.

"Today, American Jews remember the meal as a statement about the values of the Reform movement," said Gross at the dinner. "Ideas about what is and is not acceptable to eat are important ways in which humans have organized their societies and the way [Jewish] people have thought about themselves as Jews and as Americans."

While the chefs at Trefa Banquet 2.0 were all non-kosher Jews, the dishes were put together like they had been waiting their entire lives to add pork to their favorite Jewish foods. Like they could never put their finger on what was missing from potato kugel until they added some pulled pork to it. Bacon also found its way into several dishes that night. Diners snacked on bacon jam-topped chicken liver profiteroles, potato pancakes garnished with crispy bacon, and even miniature peanut butter pies sprinkled with fresh bacon bits.

Before we dug into the swine-y supper, Rabbi Sydney Mintz (a lesbian with a stand-up comedy side-hustle) of Reform Congregation Emanu-El in San Francisco gave the banquet her blessing, mentioning to the crowd that she and many other modern Jews have shifted their focus from kosher food to humanely, ethically, and sustainably raised meat. In fact, the pork and rabbit we ate that night was donated by the Jewish farmers from Devil's Gulch Ranch who practice exactly that on the Northern California coast.

For some Jews like Wall, eating pork is actually a part of their Jewish identity. As a child during the Holocaust, Wall's mother hid with a pork-eating Catholic family in Poland. She ate the raw bacon meals that she was served. When she came to America, eating pork was a symbol of nostalgia for her, and eating treyf foods became a part of Wall's connection to her Jewishness.

Whatever happened during that first treyf banquet, many Jews know how they feel about the idea of what happened that night. Which invites the modern dilemma Americans face today: Do feelings or facts matter more?

Which got me thinking about the way the treyf diet has been marketed. What if the reformed kosher diet was rebranded as "Jewish-American fusion?" Would the Jewish community be supportive of more treyf dinner parties? Who doesn't love a good fusion restaurant?