Accessibility links
In London, The American Food Aisle Is Filled With Nostalgia And Preservatives : The Salt To Americans abroad, comfort food so often looks like junk food. Shops in London are filled with items from Hershey's, Aunt Jemima and Betty Crocker. But Kellogg's Pop-Tarts seem to rule them all.

In London, The American Food Aisle Is Filled With Nostalgia And Preservatives

In London, The American Food Aisle Is Filled With Nostalgia And Preservatives 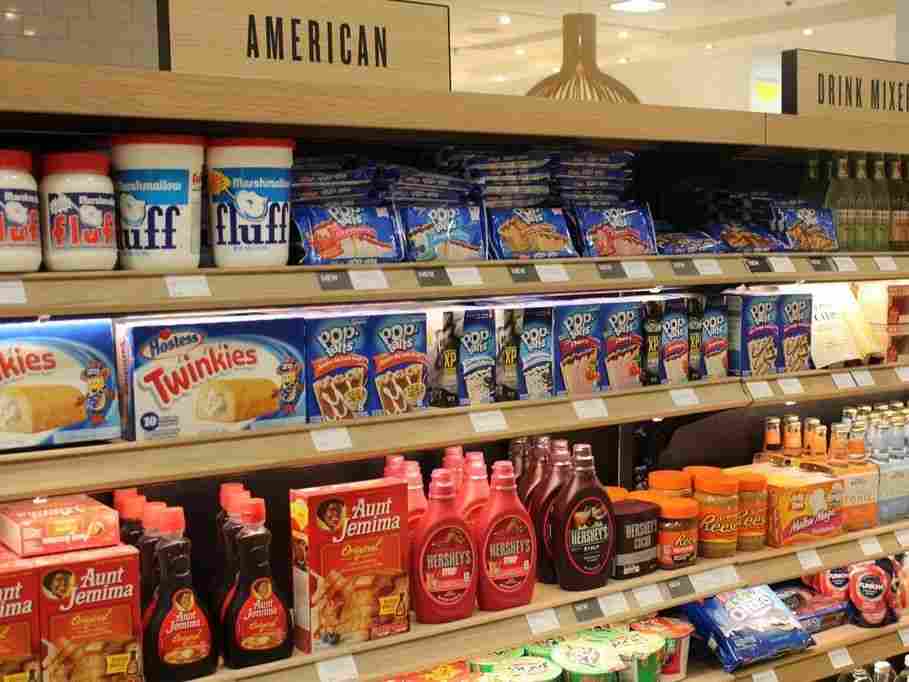 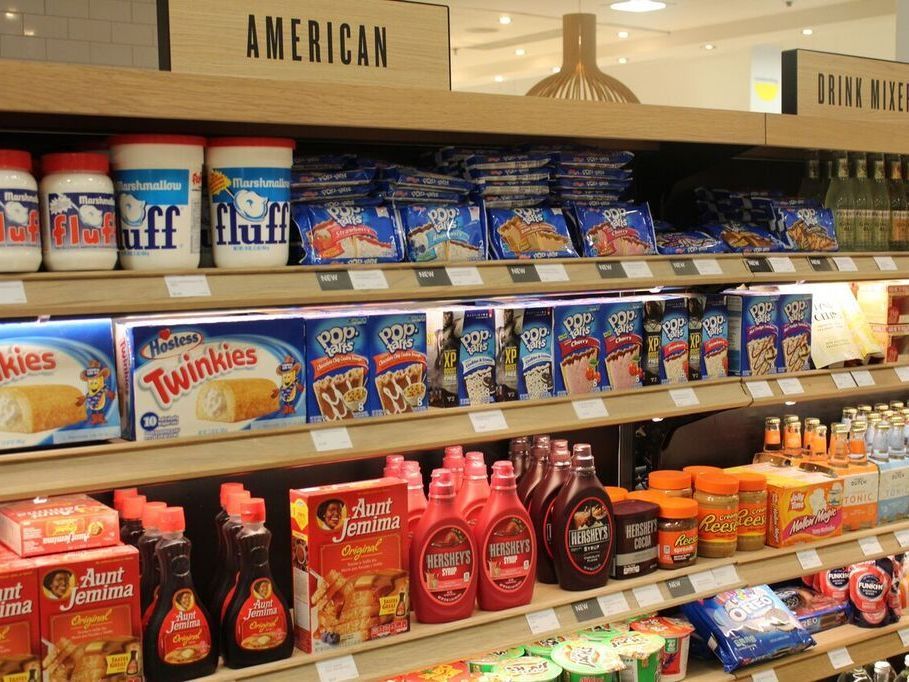 I hadn't been living in London long when I attended my first Fourth of July party. The hosts, members of the U.S. Embassy staff, made their guests envious by revealing that they could request any American products they wanted through the embassy. Minds boggled with the possibilities. Dried chiles? Aged bourbon? Fancypants cereal?

Nope. These were globe-trotting sophisticates living in the tony Maida Vale neighborhood, and topping their wish lists were ... Bud Light and Cheetos.

To Americans abroad, comfort food so often looks like junk food. (My stint in the Peace Corps made this abundantly clear.) This is a reality that London's grocery stores have embraced. Plenty of food shops in the U.K.'s capital have sections catering to American immigrants, as well as to the large population of Brits who have spent time in the U.S. and developed some American tastes. Another factor is the global influence of American pop culture. International TV hit Stranger Things, for instance, has scenes featuring Nilla wafers and Eggo waffles, which make overseas audiences curious.

Ahmad Jamal, who lectures on food marketing and consumption behavior at Cardiff Business School, isn't surprised by these trends. He says, "American consumers, like any other consumers, are socialized into consuming brands, and hence feel nostalgic about the brands after migrating to U.K. ... Businesses function as important intermediaries, and their role is to facilitate the identity positions taken by migrant consumers."

These American grocery sections are instantly recognizable — and fairly homogeneous. They all contain iconic American brands: Aunt Jemima, Hershey's, Crisco, Betty Crocker. They're often festooned with American flags, particularly around U.S. holidays. And they're all but certain to include Pop-Tarts.

Pop-Tarts are the one mainstay of every American food section in London, whether the shop is a small convenience store or a large branch of supermarket behemoth Tesco. Brits tend to find the concept of toaster pastries outlandish, along with other American imports like marshmallow fluff and halftime shows at sports matches. But like a weird expat version of the economist's basket of goods, the rise and fall of Pop-Tarts might be the best indicator of the American immigrant economy in London. Prices for a standard box range from £3.25 ($4.51) at supermarket chain Sainsbury's to a whopping £4.49 ($6.23) at ritzy department store Selfridges.

Unsurprisingly, there are plenty of varieties of Pop-Tarts for sale at the American Food Store, the only all-U.S. food shop in London. The American Food Store used to be a post office branch. When that closed down a decade ago, the owners decided to convert it into an American food emporium, on the advice of American university students (and given the owners' fondness for American food, cultivated from holidays in Florida). It now sells not only a wide variety of imported American foods but also bottled drinks, magazines and decorations.

A.S.M. Mustafiz has been working as a clerk for the American Food Store for over two years now. Originally from Bangladesh, he has developed a taste for peanut butter M&M's, though, he says, "the cereals are too expensive for me." Mustafiz reports that the shop is especially popular with American families. Notable British customers have included soccer star David Beckham and comedian Russell Brand. The busiest times converge around three American holidays: Independence Day, Thanksgiving and Christmas.

Upscale food shop Partridges reports similar seasonal patterns. Andrew Robayo, assistant manager of the Sloane Square Partridges, notes a trend of customers photographing the shop's Thanksgiving display. As well as Thanksgiving products, he says, "breakfast items, such as the cereals and pancake mixes (Aunt Jemima and Bisquick), sell well in our store, which is probably due to family popularity." The shop is also responsive to customer requests, such as for Swedish Fish and Red Vines.

It's logical enough that foreigners would gravitate to products from home that they can't find anywhere else. But what about American versions of internationally available products? Some people insist that the differences in recipes make it worthwhile to opt for American formulations, such as the American version of Cheerios that contains less sugar than the British one. Peanut butter is another potentially divisive foodstuff. I ask one homesick American acquaintance, a resident of London for seven years, whether Skippy is really better than British-made peanut butter. She responds incredulously, "Is that seriously a question?!"

As John Shepherd, managing director of Partridges, notes, "The decision to purchase an American product is often an emotional one." Because for Americans living abroad, Pop-Tarts and Cheetos aren't just "junk food," they are the undeniable tastes of home.