Accessibility links
Boozing With The Bard: How The Masses Find Common Ground With Shakespeare : The Salt From a theater company where audiences drink along with the actors to a book of cocktails inspired by his plays, alcohol has long been "a great provoker" in making the Bard's work more relatable. 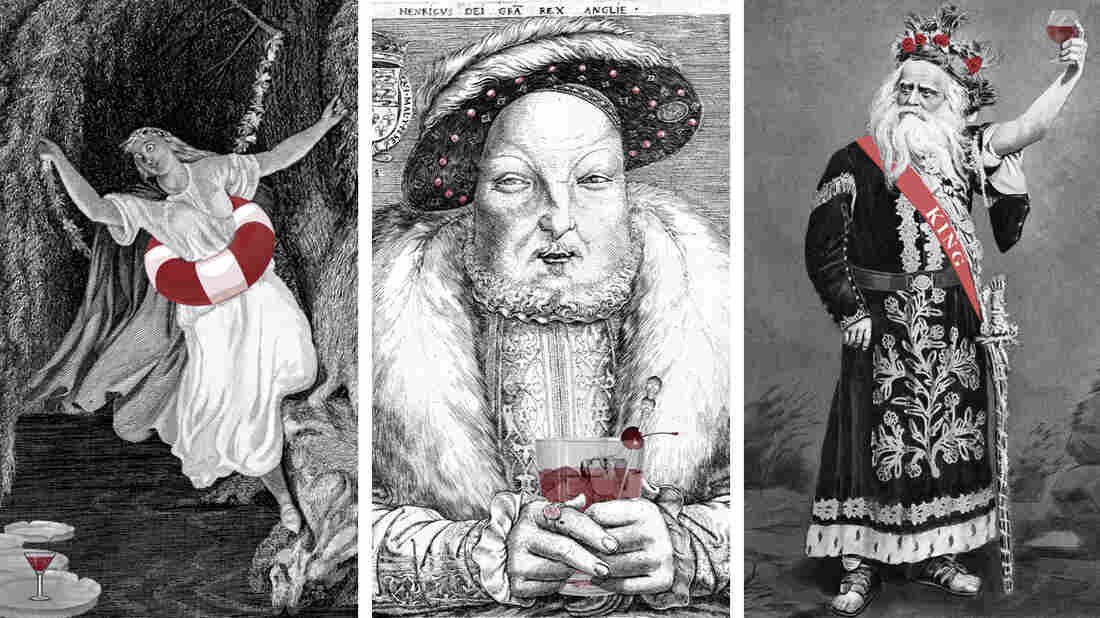 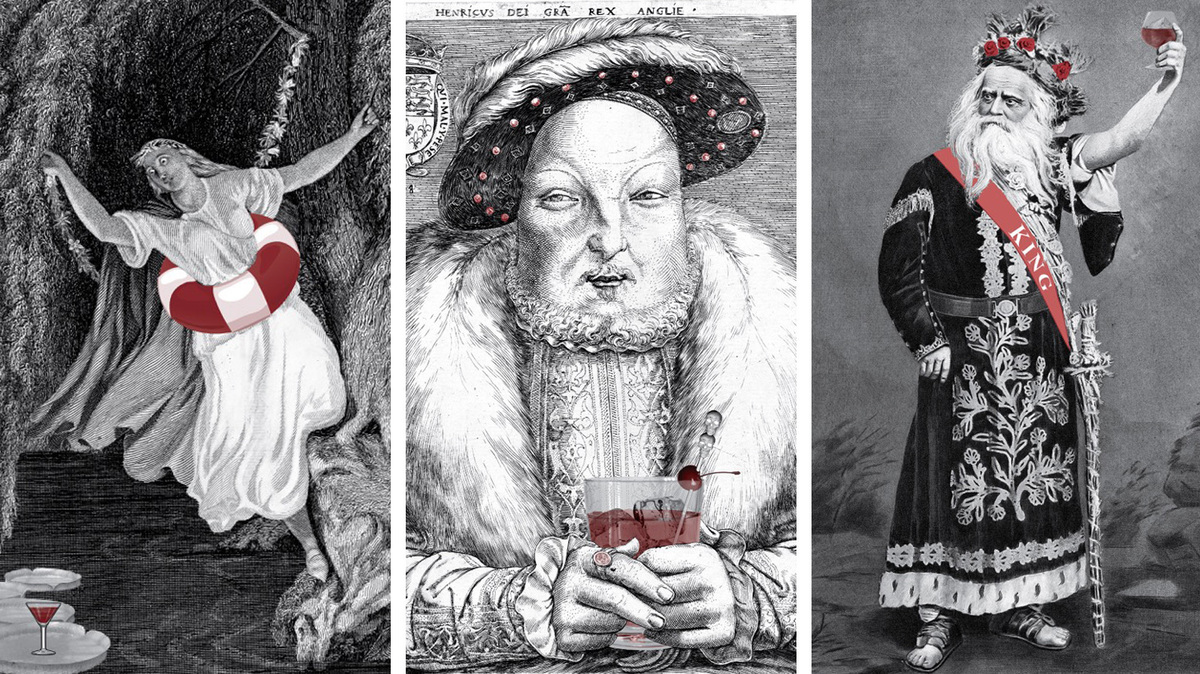 A trio of illustrations from the cocktail book Shakespeare, Not Stirred: Ophelia, King Henry VIII and King Lear.

It's not often that an actor is encouraged to toss back a real cocktail while on stage. But at the nightly performances of the off-Broadway play Drunk Shakespeare, having a drink — or five — is actually required.

The brainchild of producer Scott Griffin and director David Hudson, "Drunk Shakespeare" is akin to watching a live version of Comedy Central's "Drunk History," only the audience is drinking along with the cast in real time — and sometimes even changing the direction of the performance. It's improv combined with classical theater, which Hudson says is built around the premise that the show's quasi-fictional company of actors, known as the Drunk Shakespeare Society, are "a group of professional drinkers with a Shakespeare problem."

The show is just one of many ways in which fans and scholars of the Bard of Avon have used alcohol to make Shakespeare's world more relatable to modern audiences. Mike Sause, one of a dozen actors who claim membership in the show's company, is a Cincinnati, Ohio, native with a preference for Kentucky bourbon when it's his turn to quaff five shots on stage at the start of the performance. Lest you think that all five actors on stage during each show are hammered, rest assured that just one actor takes the mickey — literally — while the other four are stone-cold sober.

"The actor who is drunk is the driver of the wackiness of the show," says Sause, who particularly likes playing the role of Macbeth. "When you're one of the sober people, you're playing off the drunk actor and audience and the wrenches that they're throwing into the performance." 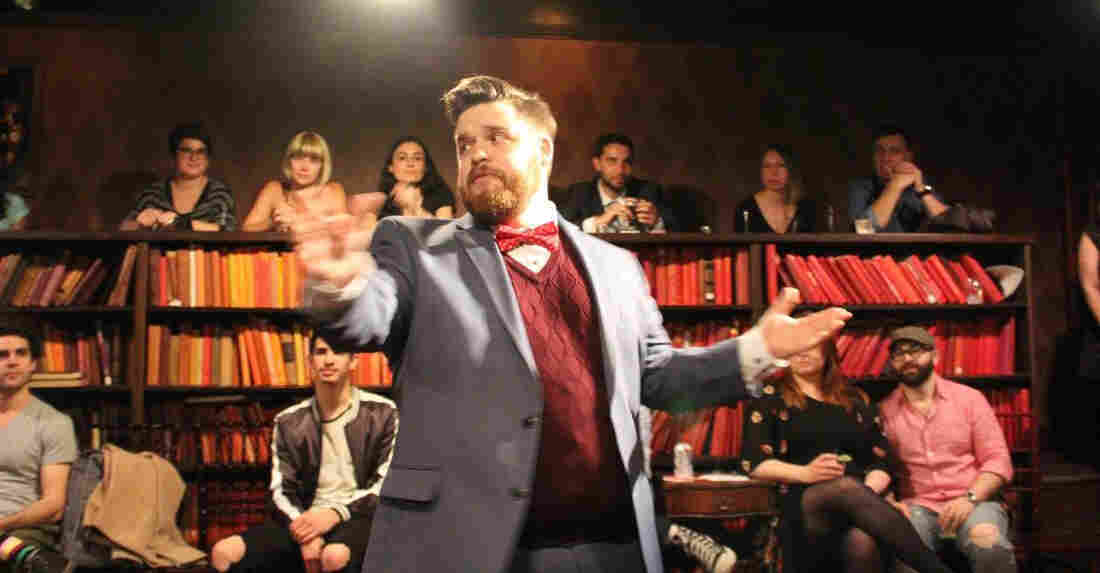 Actor Mike Sause performs in Drunk Shakespeare, a show that combines improv with classical theater. Director David Hudson says the show is built around the premise that its quasi-fictional company of actors, known as the Drunk Shakespeare Society, are "a group of professional drinkers with a Shakespeare problem." Eric Sause hide caption

The show is staged in a theater space designed to look like a cozy library and lined with 15,000 books. The audience literally shares the stage with the actors, while servers troop through the action bearing trays of cocktails and snacks. For an extra fee, two audience members can become king or queen for the evening, granting them the power to demand that the drunk actor imbibe more drinks or alter the storyline.

"The audience is kind of the sixth character in the play," says director Hudson. "In Shakespeare's time, the Globe Theatre was the theater of the 'groundlings' " — the poorest patrons, who paid a penny to stand in the pit just below the stage. "I had a really exciting experience there a few years ago, when there was some kid who was on his phone during a performance of The Tempest and [the actor portraying] Caliban just walked over and whacked this kid on the top of his head. It motivated me that this is what the theater of the time was all about."

Snacking In Shakespeare's Time: What Theatregoers Ate At The Bard's Plays

Those groundlings certainly could have been drunk during performances at the Globe, adding to the necessity for quick-witted improvisation by actors during a poignant soliloquy — as the Porter in Macbeth opines, "Drink, sir, is a great provoker." Beer, a common beverage of the time, was an important source of calories, says Amanda Herbert, assistant director at the Folger Institute of the Folger Shakespeare Library in Washington, D.C. — especially for those engaged in heavy manual labor.

"Historians have found that working men drank between four pints and over a gallon of beer every single day," says Herbert, noting that the ABV content of the beer could range anywhere from 2 to 12 percent. Writing in The Recipes Project, an exploration of historical recipes by an international group of scholars, Dr. James Brown and Dr. Angela McShane note, "It seems likely that early modern people were indeed constantly tipsy, if not perpetually drunk."

Heather Wolfe, curator of manuscripts at the Folger Shakespeare Library, points out that Shakespeare's overindulgence may have led to his own demise, as referenced in a 17th century notebook kept by John Ward, vicar of Stratford-Upon-Avon, where Shakespeare was born and is buried. In 1662, 46 years after Shakespeare's death, Ward wrote: "Shakespeare, Drayton, and Ben Jonson had a merry meeting and it seems drank too hard for Shakespeare died of a fever there contracted."

Alcohol is a common theme in many of Shakespeare's plays – so much so that Bard scholars Caroline Bicks and Michelle Ephraim were inspired to pen a lighthearted, yet erudite, book of cocktails titled Shakespeare, Not Stirred, that aimed to bring the Bard to a more general audience.

"Since the early 20th century, Shakespeare has had a reputation in American popular culture as both archaic and 'highbrow'," says Ephraim. "He is neither. We wanted to show our readers how relatable his themes and characters can be. Shakespeare was really into celebrating the human experience."

In the spirit of celebrating that experience, readers of Ephraim and Bicks' Shakespeare-inspired cocktail book will find recipes like Lady Macbeth's G-Spot, a whiskey sour dotted with "damned spots" of fresh pomegranate seeds.

"Booze — in Shakespeare, as in life — can lead to some unfortunate situations," says Bicks. "Impotence, unemployment, regicide. On the tragic end, you have Richard III drowning his brother in a barrel of wine; Cassio [in Othello] and Lepidus [in Antony and Cleopatra] losing their positions when they drink on the job, and Lady Macbeth slipping the king's guards a mickey. Jealousy, ambition, insecurity — those negative human drives haven't changed much since Shakespeare was writing, and people still use booze to manage them."

Back at Drunk Shakespeare, audience members will find cocktails named The Strumpet and The Porter's Secret on the menu, while the drunk actor on-call for the performance may opt to "speed rack" — one shot each of whiskey, gin, vodka, tequila and rum. On Friday and Saturday nights, when there are two performances, the same actor drinks at both shows, leading to, as one might imagine, a rather raucous second performance.

"It's not only that the actor has been drinking during the first show," says director Hudson, "but it's also that the audience at that second performance has probably already been out to dinner and had some cocktails and wine before coming to the theater. Things can get a little wild."

Sause concurs. "As the drunk actor, it particularly gets more difficult when it's a double show. There have been shows where you could be doing a monologue you've done a hundred times, but because of the Kentucky bourbon flowing through you, you suddenly have this blank. You know what you're supposed to be saying but you can't find the right words in Shakespeare's iambic pentameter to catch up. That's when the improv takes over and you get the chance to riff and colloquialize."

But if you're worried about how the actors are handling the effects, both Sause and Hudson say fear not. Company members each take on the drunken role no more than a few times a month and are treated to a big dinner before the show and a cab ride home after, which Sause particularly sees as a worthwhile perk for a night of theatrical debauchery.

"The moms in the audience are always concerned and ask how you're getting home," says Sause.