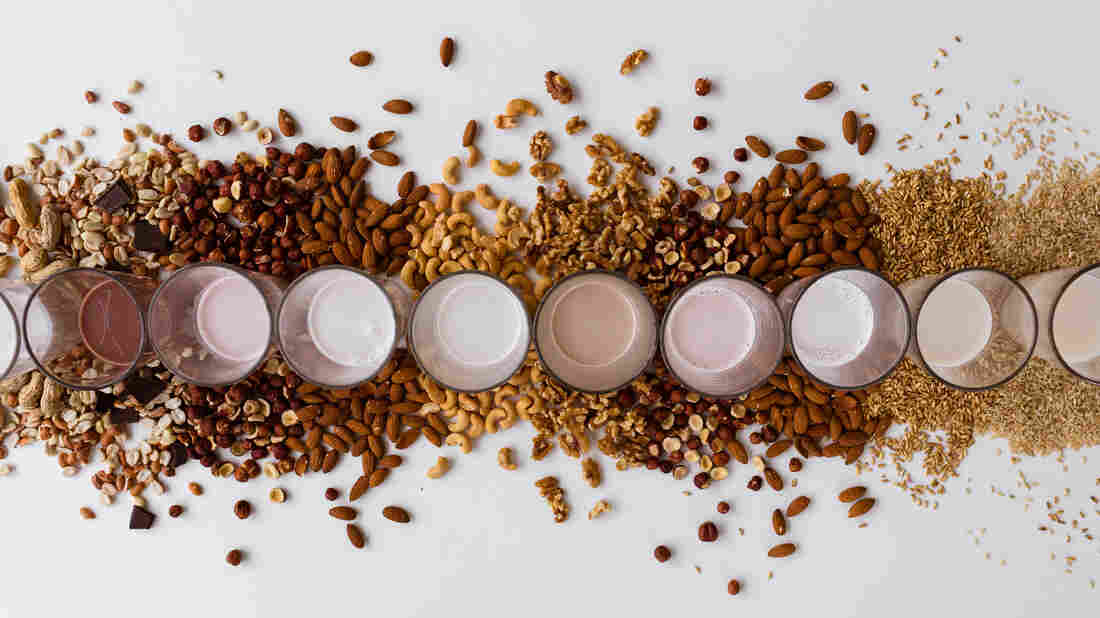 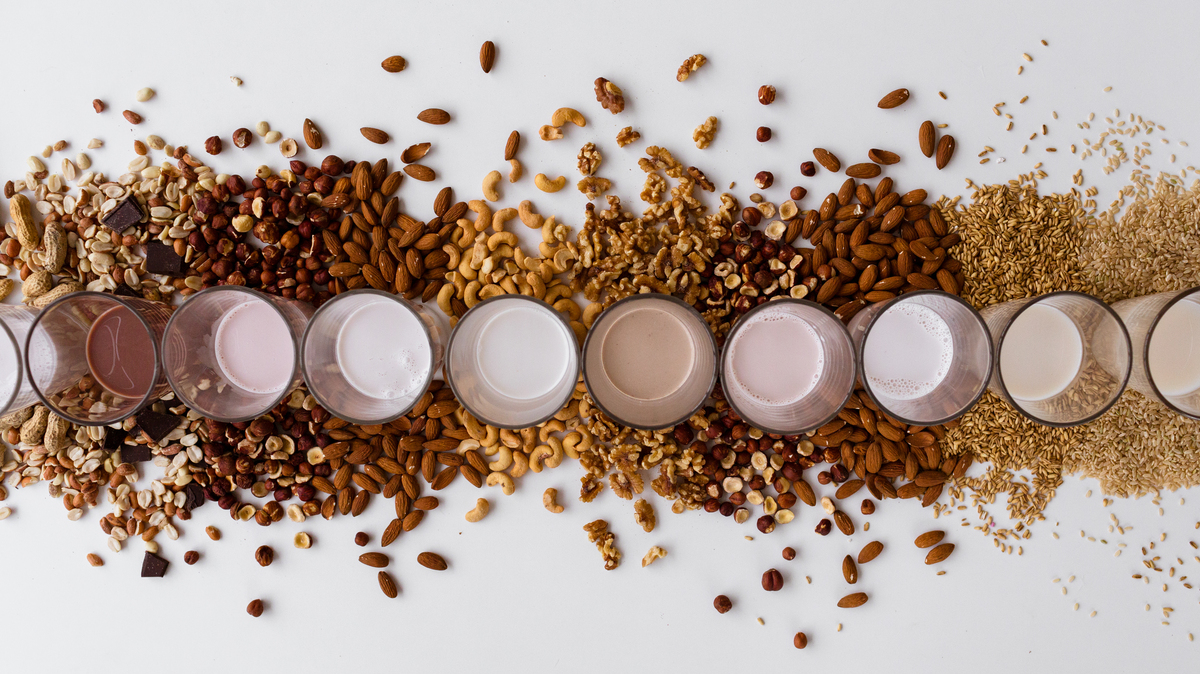 Some of the "milks" on offer by Elmhurst Milked, which operated as a traditional dairy in New York for nearly 100 years. These days, Elmhurst has replaced cows with nuts, oats and rice.

As the story goes, Henry Schwartz's grandfather bought a herd of cows in Manhattan in the early 1900s and walked them across the Williamsburg Bridge all the way to the family farm in Elmurst, a neighborhood in Queens. By 1919, Schwartz's father, Max, and uncle, Arthur, were bottling milk under the name Elmhurst Dairy. By the 21st century, Elmhurst's milk could be found across New York City, from elementary schools to Starbucks.

"Both sides of my family were in the dairy business, so I was involved from a young age," says Schwartz, now 83. "Since I was 6 years old, I would work for my father on weekends and vacations, learning every aspect of the business."

But by 2016, with American milk consumption on a major decline — dropping by more than a third since the 1970s — Schwartz decided it was time to not only get out of dairy, but to move in a whole new direction: plants.

The company is now known as Elmhurst Milked; cows have been replaced by nuts, oats and rice, which are being "milked" by a proprietary cold-water mechanical process invented by food scientist Cheryl Mitchell. By separating the protein from the fiber, Elmhurst's extraction method results in a liquid that retains all of its protein, along with a consistency that doesn't rely on oils, stabilizers or thickeners — such as xanthan gum, guar gum and carrageenan — to provide that creamy mouthfeel.

A Peas Offering For The Dairy Aisle: Can This Milk Alternative Rival The Real Deal?

For Mitchell, it was a quest that began early in her career in the 1970s and '80s, when she developed Rice Dream rice milk for natural foods company Imagine Foods — an interesting path for the daughter of celebrated food chemist Bill Mitchell, the inventor of Tang, Cool Whip and Pop Rocks.

"I had just gotten my Ph.D., specializing in carbohydrate chemistry," recalls Mitchell. "I was really interested in metabolism and how our bodies handle carbohydrates, and then got entrenched in looking at food from a natural processing perspective."

Although proud of her work at Imagine Foods, Mitchell still felt dissatisfied by not being able to maximize the nutrients in raw ingredients, as many nutritional elements were lost during the extraction process. So, in 2001, she ventured out on her own, buying a research facility in California, where she spent the next five years developing a process to create a plant-based milk that had as much protein as its dairy counterpart.

"We had to make a quantum leap in technology," she says. "Typically, when you make these kinds of milks, you grind everything up and then filter out the liquid. You can get a nice milk with great flavor, but the protein is lost. My goal was to keep that taste, but with all the protein." 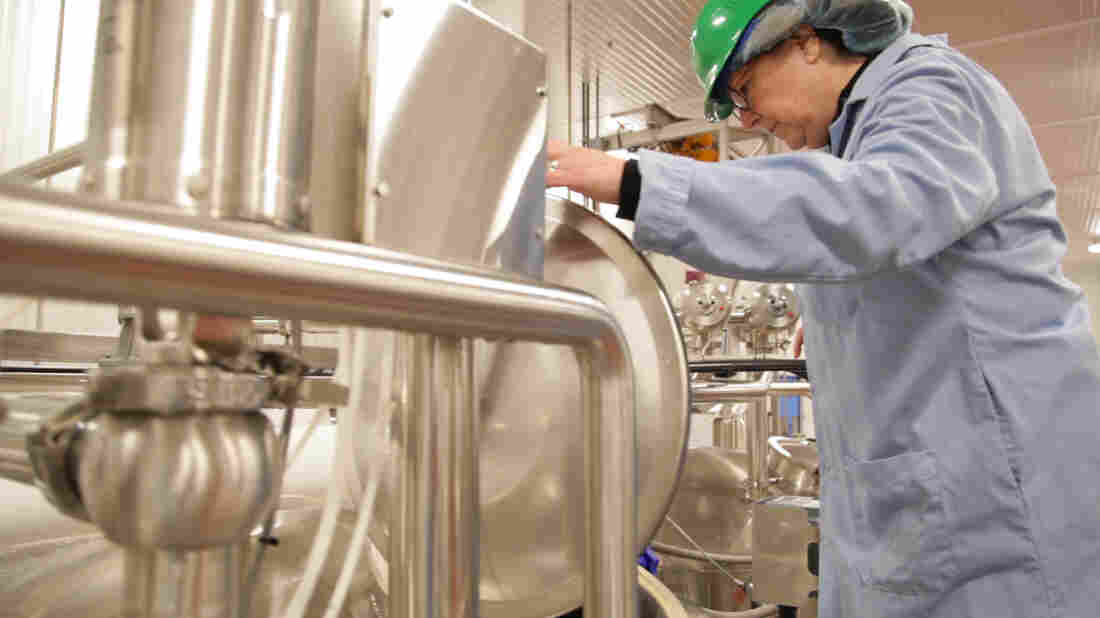 Cheryl Mitchell, shown here at the Elmhurst Milked plant in Elma, N.Y., spent years developing a process to create a plant-based milk that had as much protein as its dairy counterpart. Courtesy of Elmhurst Milked hide caption 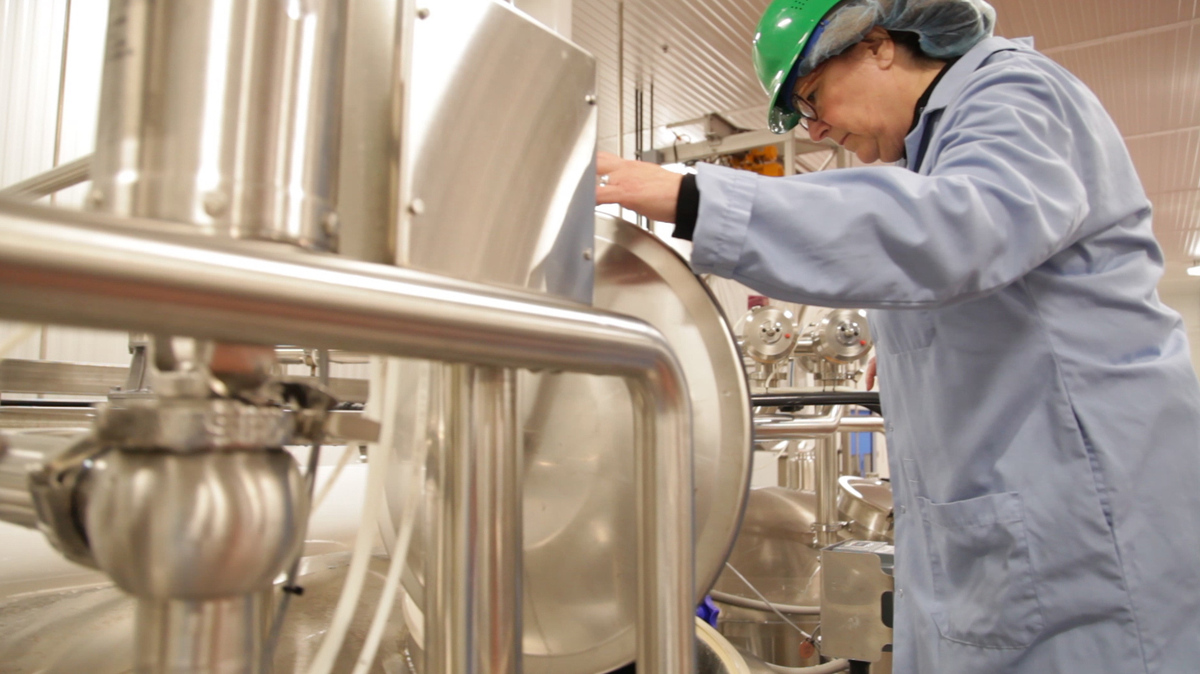 Cheryl Mitchell, shown here at the Elmhurst Milked plant in Elma, N.Y., spent years developing a process to create a plant-based milk that had as much protein as its dairy counterpart.

After the economic collapse of 2008, it took some time for Mitchell to find an investor in a large-scale, cutting-edge manufacturing process, which included developing new equipment. The rising popularity of almond milk and a chance introduction to Schwartz in 2015 changed everything — and quickly. Elmhurst's first four plant-based milks debuted in January 2017.

"I was inspired by what I was seeing at natural foods industry shows, and particularly in the work and research that Cheryl Mitchell was doing," says Schwartz, who has been following a plant-based diet for several years. "It was time to reevaluate the past and start creating the food traditions that would carry us into the future."

So Mitchell moved from California to the town of Elma, in upstate New York, and worked with Schwartz to build a plant adjacent to Elmhurst's sister company, Steuben Foods. There, they started "milking" almonds.

"In our training with the guys in the plant at Elma, I said, 'I'm going to transform these almonds into this incredible milk,' " says Mitchell. "There was some skepticism as to what this would look like, but then they saw this wonderful, creamy milk coming out. It looks like rich, full-fat dairy milk — but it's coming from plants."

With the popularity of almond milk, it was an obvious place to start, but walnuts, cashews and hazelnuts were quickly added to the lineup. Then, in her quest for diversity, sustainability and versatility, Mitchell branched out to ingredients that she really wanted to milk, such as peanuts, oats and brown rice.

American peanut farmers are excited. Mitchell's process led to the development of the first new peanut product category in more than a century: peanut milk, or, as they call it at Elmhurst, "milked peanuts," with 6 grams of protein per serving.

"We think that peanut milk is very much on trend with the plant-based food movement," says Bob Parker, president of the National Peanut Board. "It has a real strong boost of protein, close to what you'd get in a glass of dairy milk, and it just tastes really good." In fact, it tastes just like peanuts, which is why it seemed like a no-brainer to also develop a chocolate version, kind of like a Reese's Peanut Butter Cup in a glass. It's a favorite among peanut farmers and boasts 8 grams of protein per cup.

Soy, Almond, Coconut: If It's Not From A Cow, Can You Legally Call It Milk?

Not everyone, however, is so excited. Chris Galen, spokesman for the National Milk Producers Federation, which represents dairy farmers and opposes the use of the word "milk" to identify plant-based beverages like Elmhurst's, notes that all nutrition is not created equal.

"I think it's very telling that Elmhurst recognizes that the protein disparities are a real issue," he says. "The juice from a slurry of nuts is not necessarily going to deliver the same nutrition. Besides protein, there's vitamin A, D, B-12, calcium, potassium, magnesium. With real milk, you get a consistent package of nutrition."

Mitchell acknowledges that each offering at Elmhurst provides different nutritional benefits, rather than a one-size-fits-all beverage. The nut milks boast iron, calcium, and potassium, while the oat and brown rice milks provide a boost of dietary fiber. Each also has a distinct flavor profile and some, like peanuts, offer a minimal environmental footprint.

Around 7,000 farmers grew some 3.5 million tons of peanuts in the U.S. last year. Parker says it requires just five gallons of water to grow a 1-ounce serving size of peanuts, compared with 80 gallons of water for the same amount of almonds. And while Mitchell doesn't play favorites with ingredients, she loves that peanuts are both cost-effective and highly nutritious.

"One thing about sustainability is that you don't want to hit just one crop. Peanuts, oats, rice, pumpkin seeds, pistachios — we can go on forever," Mitchell says. "The diversity means we can pull in different sources for different applications. Maybe the cashew milk is great to use for savory dishes, while the walnut milk pairs with maple syrup in baked desserts."

This is where Schwartz sees future growth, saying, "We are at the helm of a radical shift in food technology. We are able to look at plant-based food sources in a new way as we maximize the nutrition that exists in these sources and eliminate food waste as we utilize every piece of the nut or grain."

This means the Elma manufacturing plant is a no-waste operation, drying the separated nut and grain fiber for cereal and other products. The company is working with other plant-based businesses to develop non-dairy cheese and yogurt with Elmhurst milks, which, Schwartz and Mitchell speculate, could mimic traditional dairy versions because of the higher protein content.

"I'm very excited that I didn't just give up on this," says Mitchell. "Food scientists are often trying to make substitutes, but this isn't a substitute. We're embracing our primary food sources, which means that we're not losing anything, but actually gaining a new world of foods and tastes."