Accessibility links
Learning To Love Sake: Japan Ramps Up Efforts To Entice Foreign Markets : The Salt Faced with a shrinking market and workforce, Japanese sake brewers are relying more on exports for growth. So, the government and sake industry are investing in education to help demystify the drink. 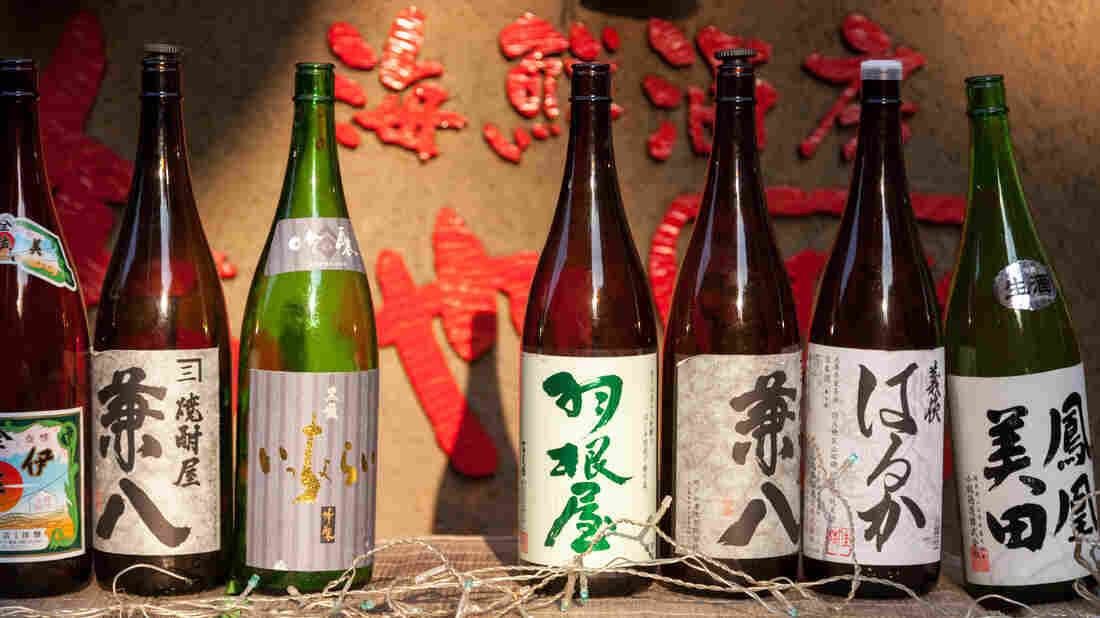 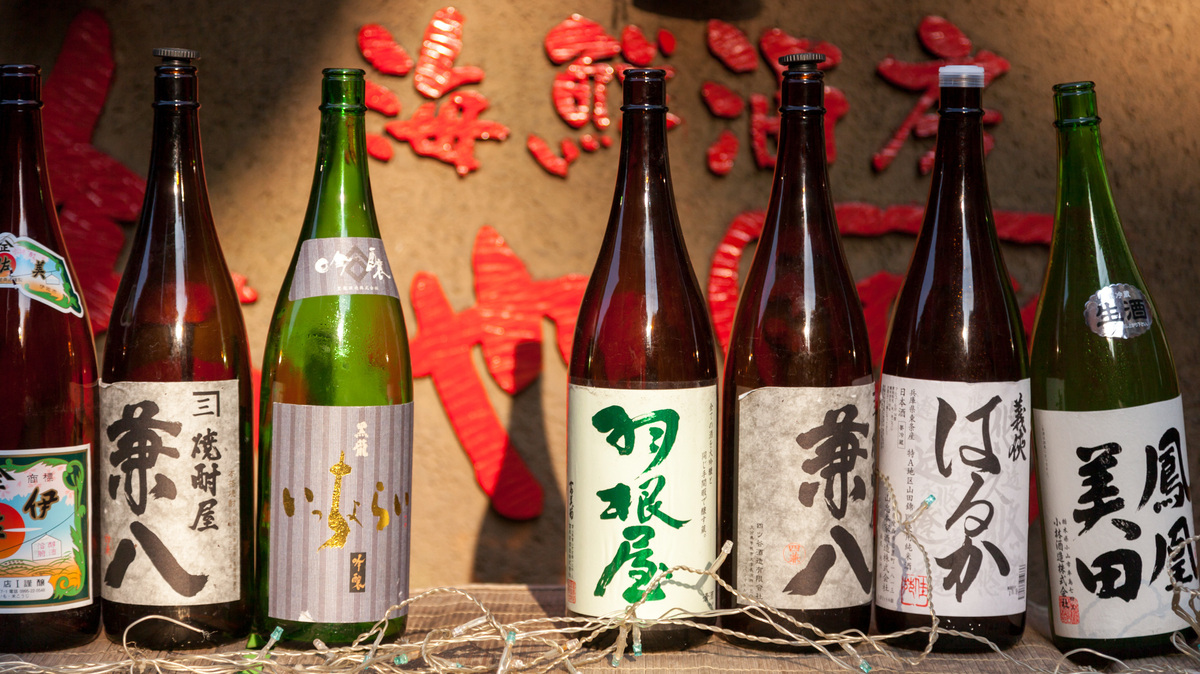 Empty sake bottles lined up outside a restaurant in the Daikanyama area of Tokyo.

Outside of Japan, sake is somewhat of a mystery, with its own terminology, styles and drinking traditions. But the country's recent push to make sake more comprehensible to non-native drinkers is making an impact, especially in the U.S.

Sake can easily fall between the cracks for American drinkers. Because sake is brewed, relying on a mold called koji to convert the rice's starches into sugars for fermentation, "it's made like a beer but drinks like a wine" in texture, character and strength. A pint of 5 percent alcohol beer makes a sensible serving; a pint of 16-to-17 percent alcohol sake is a whole night of drinking.

Sake quality and style is also largely defined by how much the rice is milled, rather than by what kind of rice is used (though the latter is important). Designations like ginjo and daiginjo indicate the rice grains are milled to at least 50-to-60 percent of their original size. Typically, more milling creates a more fragrant, fruity and premium sake.

For wine drinkers, grape variety and growing conditions tend to define wine style, so considering variables such as milling requires a different way of thinking. To help drinkers understand sake, Japan has focused its efforts on education. For example, in 2014, the Japan's financial support led the U.K.-based Wine and Spirits Education Trust (WSET) to introduce a sake education curriculum, placing it on par with wine and spirits.

"Education has really ramped up, and there's all sorts of educational groups," says Beau Timken, whose San Francisco shop, True Sake, has sold more than 1 million bottles since it opened 15 years ago. "We're at that tipping point now where people can tell the difference between good and bad sake, and that's huge. Americans used to think that sake was sake."

Blending Techno And Tradition: You Should Be Dancing ... With Sake

Other efforts are straightforward Marketing 101: subsidizing brewery visits for sommeliers and shop owners such as Timken, for example. Some of the Japanese government's activities are more subtle, but show a tipping of the hat to sake's cultural significance.

Tim Sullivan, who blogs about sake on his site, Urbansake.com, and serves as a brand ambassador for sake-maker Hakkaisan, returned last October after a year of learning and working at the brewery. He was the first foreigner to work at a brewery on a cultural activities visa rather than a work or business visa, a move which places sake brewing on the same level as esteemed activities like martial arts, ikebana (flower arranging), and calligraphy.

Japanese food is generally getting similar treatment. "Japanese cuisine was declared a UNESCO Intangible Cultural Heritage in 2013," says Sullivan. "That was a monumental point in the promotion of sake, because sake has always gone hand-in-hand with Japanese cuisine. The place that the majority of Americans get their first exposure to premium sake is at a Japanese restaurant."

Americans are responding well to what they taste. Worldwide, sake exports have grown an average of 10 percent yearly for the past 15 years (with the exception of a recession-induced stall in 2009), reaching a market value of $140 million in 2016. One-third of that is coming to the U.S., Japanese sake's biggest export market.

Toshio Ueno, manager of business development at sake importer Mutual Trading and a certified WSET instructor, says he expects the support to continue at least until the Tokyo Olympics in 2020. According to Ueno, Japan's brewers can exult in the U.S. market's preference for premium sakes rather than cheap table sake. 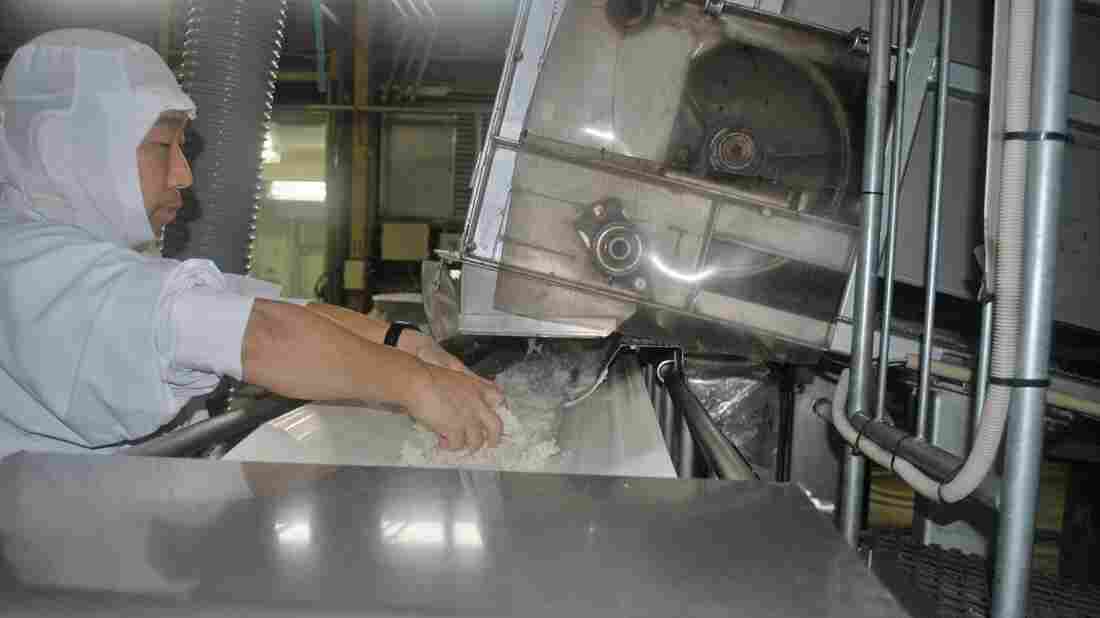 A worker at the Hakkaisan brewery in Japan makes sure there aren't any clumps in the rice as it comes out of the steamer. Jim Clarke/NPR hide caption 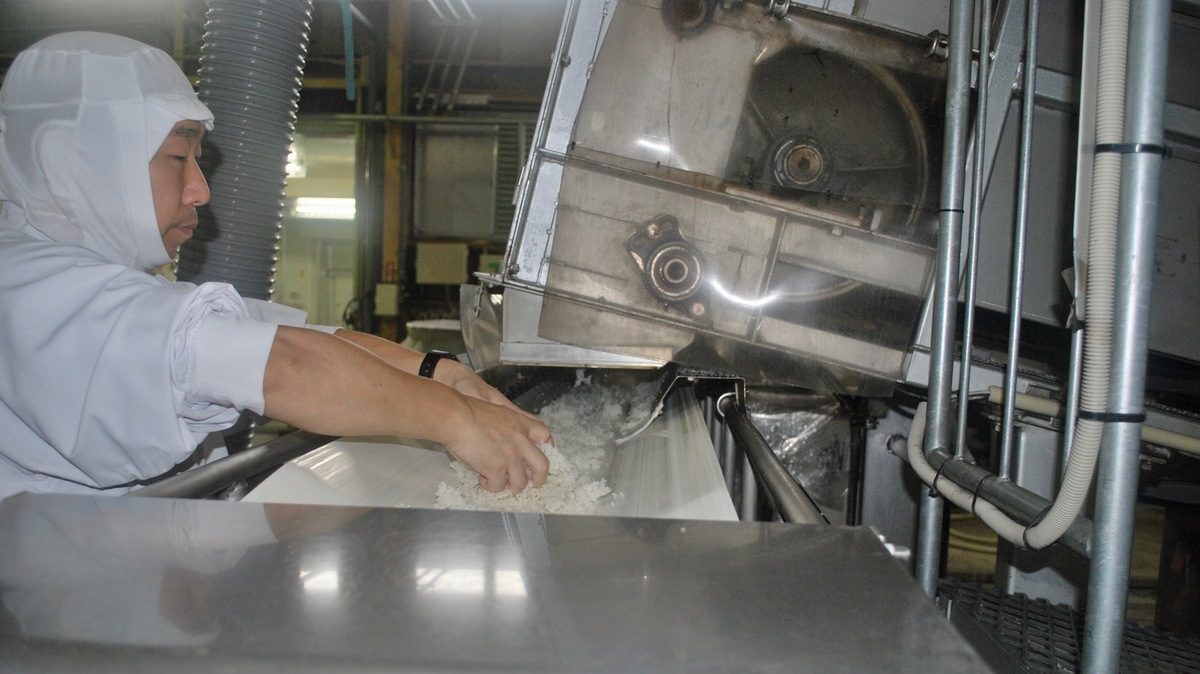 A worker at the Hakkaisan brewery in Japan makes sure there aren't any clumps in the rice as it comes out of the steamer.

Within that premium category, junmai sakes — pure rice sakes, without fortification with neutral brewers alcohol — dominate in a way they don't in Japan. "I think American people are more purist, so they don't like fortification as much," says Ueno. "People believe that junmai is pure, so it's better for you, but the fortified sakes are more popular in Japan because they give you a crisp, dry finish."

The next area of expansion, says Sullivan, is to bring sake out of the purely Japanese context and pair it with non-Japanese food. In fact, when I met Sullivan last November, it was to enjoy sake with pizza. "Sake has one-third the acidity of wine, but it's lactic acid [the acid found in milk products], so cheese and sake make a natural pairing," says Sullivan. In this case, the Hakkaisan Junmai Ginjo (i.e. a pure rice sake in which the rice was milled to 60 percent or less of its original size) drank admirably when paired with a pizza topped with fontina cheese and Brussels sprouts. Hakkaisan is just one brewery now working to break out of the Japanese restaurant scene. Results are already appearing on menus at places like Catbird Seat in Nashville, a non-Japanese restaurant that features sake prominently alongside its New American cuisine.

But government programs can only go so far without brewers themselves investing in overseas markets. "Dassai is the model of how to do it as an exporter," says Timken. "One of the sons [of the company's founder] ... went to New York, put boots on the ground, and started going to restaurants, educating people about Dassai and putting them in portfolios."

Other breweries are following that model, but Timken says a "stoic," tradition-bound attitude has slowed progress for some. This is reflected, for example, in sake labels: beautiful, but for non-Japanese speakers, often unintelligible and hard to remember. For some breweries, throwing away a label with centuries of history behind it may be too great a sacrifice. Both Timken and Sullivan say this has slowed down the leap from restaurants to retail, where label recognition is key.

American-owned importer Vine Connections, which brings in more than 30 sakes, pushes the breweries it works with to add poetic translations of names on the labels, leading to creative brands such as "Bride of the Fox," "Hawk in the Heavens," and "Wandering Poet." Even large, Japanese-owned companies such as Mutual Trading Company, which imports about 200 different sakes, now bring in sakes with names like "Cowboy" and "Square One" alongside more traditional names like Kikusui and Tamanohikari.

Exports are vital for most small-to-medium-sized breweries. It may be the "liquid essence of the nation," as Timken characterizes it, but within Japan, sake nevertheless lags behind beer and shochu in sales. There's also a deeper problem: "In Japan, the whole economic and social situation is changing because the younger generation population is decreasing," says Ueno. Faced with a shrinking market and workforce, Japanese sake brewers are relying more on foreign markets for growth.

For Dassai, that means not just visiting and working the market, but putting down roots. In December, the company announced a new partnership with the Culinary Institute of America, and is building a brewery adjacent to the institute's Hyde Park campus in New York. In 2019, when Dassai begins brewing, the "liquid essence" of Japan will flow right alongside the Hudson River.

Jim Clarke is a journalist based in New York City who writes about beverages and food.