Accessibility links
Ancient Turkey Bones In Mexico Reveal A Strange Relationship With Humans : The Salt New tests reveal humans have long raised the birds, and not just for food. Ancient Mesoamericans were buried with turkeys, perhaps as snacks, companions or status symbols. There was even a turkey god. 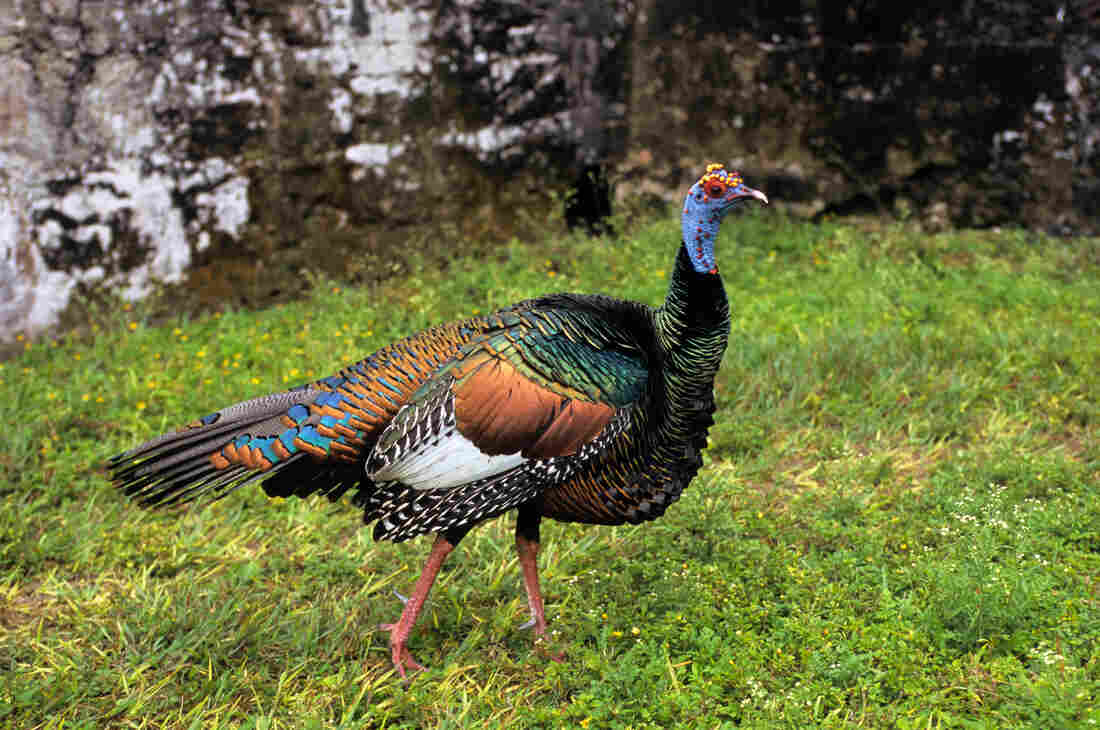 Ocellated turkeys stand out for their bright blue heads and iridescent feathers. They're still around the Yucatan today. Wolfgang Kaehler/LightRocket via Getty Images hide caption 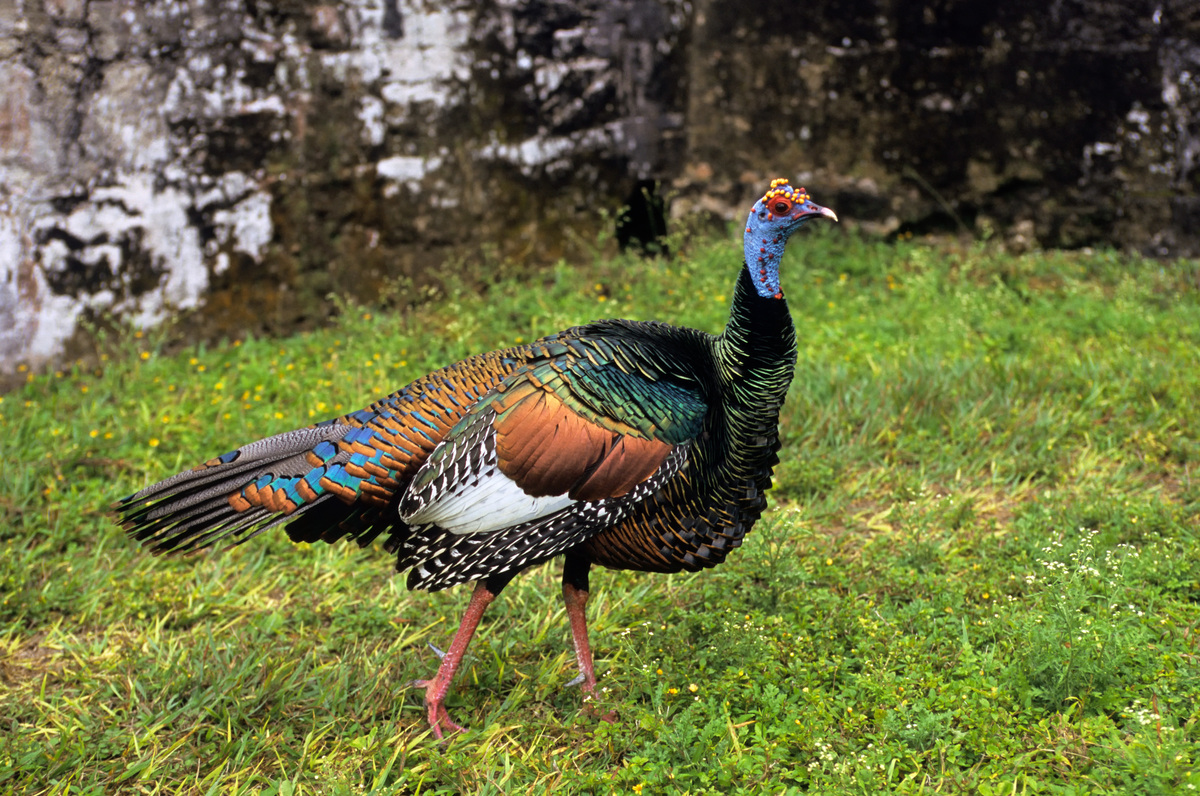 Ocellated turkeys stand out for their bright blue heads and iridescent feathers. They're still around the Yucatan today.

In 1519, conquistador Hernán Cortés wrote a letter home to Spain from Mexico, detailing a surprising element of the local cuisine. "They roast many chickens ... which are as large as peacocks."

Cortés was a little confused about the giant chickens, because he'd never encountered this bird before. Europeans ate chicken, so he projected his understanding of poultry onto some strange new birds. But he was wrong. The peacock-sized birds were turkeys.

These turkeys from Mexico eventually made it back to Spain, and the rest of Europe, then crossed the Atlantic to the eastern United States after that. Now that turkey mainly features in deli sandwiches and Thanksgiving roasting pans, it's tempting to read Cortés' letter and think that turkeys have always been raised just for food. But that would flatten many facets of the role of poultry in ancient society, before he arrived.

Heritage Turkeys Make A Comeback, But To Save Them We Must Eat Them

Archaeological evidence backs up Cortés' claim that ancient people ate turkey, but more bones appear in special locations than at garbage sites. Because their bones show up in these high status, ceremonial locales, turkeys were probably mainly prized for more than their meat. "There is another site where we have evidence of complete turkeys with human burials," says Aurelie Manin, an archaeologist at the University of York, in the United Kingdom.

Manin and a team of researchers recently took a look at turkey bones from archaeological sites throughout Mesoamerica — the region spanning present-day central Mexico to Costa Rica — and published their results in the Royal Society Open Science.

Buried with a turkey

Before their analysis, they knew turkeys were symbolically important to ancient Mesoamericans. The Aztec Codex includes turkeys alongside important gods and ceremonies, showing their special status. There's even a turkey deity, Chalchiuhtotolin, god of the plagues. Archaeologists had found an ancient flute, called an ocarina, decorated with a turkey drawing at a grave site in Monte Alban, Oaxaca, Mexico. And in Oaxtepec, Morelos, Mexico, a dig uncovered the complete turkey skeleton at a burial that Manin mentioned, suggesting Mesoamerican people sometimes buried humans with turkeys.

"It seems that they were sometimes putting the turkeys on plates [at burials], so they might have been cooked somehow, or the turkey would just lay next to the individual," Manin says. It's hard to tell whether a turkey at a grave site is meant as a companion, a snack, or a status symbol, but any of those options elevate the turkey above an ordinary bird.

And while Mesoamericans ate turkeys sometimes, Manin's team showed that they weren't just commonplace food. The large human population in early Mexico didn't result in an equally large number of turkeys, so people didn't seem to depend on them as food. Turkey rearing really only grew after many Mesoamerican cities, like Teotihuacan, were beginning to fade.

Mesoamericans were also using turkey to feed other animals, which may have been ritual sacrifices. Cortés covered that too, although he still mixed up turkeys and chickens. In Teotihuacan, he wrote about houses with birds of prey, "representing all the sorts known in Spain, from the kestrel to the eagle ... All these birds were fed daily on chickens, with no other food."

Larger animals feasted on turkeys, too, Cortés continued. "There were certain large rooms in this palace, fitted with great cages, very well constructed, and joined with heavy timbers, in all of most of which were kept lions, tigers, foxes, and every kind of cat in considerable numbers. These were also fed on chickens," he wrote.

But the written record and basic information about turkey bones at archaeological digs are really only the first clues about what turkeys in Mesoamerica were up to.

Manin and her team wanted to know where the turkeys came from, and how humans interacted with them. So they took bone samples, using DNA testing to map turkey lineage. The team analyzed the elements in the bones to look at what the turkeys had been eating, unraveling more clues about the ancestors of turkeys on the table today.

Their DNA detective work showed that Mesoamerican turkeys mainly came in three subspecies: the South Mexican wild turkey, the Rio Grande wild turkey, and Gould's wild turkey. At sites in the Yucatan peninsula, another bird, the Ocellated turkey, appeared. Ocellated turkeys stand out for their bright blue heads and iridescent feathers. They're still around the Yucatan today. "The Ocellated turkey is lovely, it's like the peacock of the turkey world," says Camilla Speller, an archaeologist at the University of York who also worked on this analysis.

Different regions were home to different turkey subspecies, but in all cases, bones showed that ancient people were feeding local turkeys at least some of the time. Grass-foraging wild turkeys end up with a different form of carbon in their bones compared with the corn-fed turkeys that humans cultivate. "So when they start to consume high quantities of maize in their diet it comes through very clearly," Speller says.

Although turkeys were clearly eating corn and other human food throughout Mesoamerica, bones outlined a wide range of turkey lives. Some birds appeared to be held nearly completely captive, while others lived free-range lives, eating some grass and some corn.

It's not clear why turkey treatment varied so much. Mesoamerica was certainly a large and diverse region, says Brian Kemp, an archaeologist at the University of Oklahoma who has studied ancient turkeys in the southwestern United States. "In the area this study sampled, you've got hunter gatherers, farmers, people who built all these gigantic monuments and temples, tons of linguistic diversity," he says.

Ultimately, knowing more about these ancient Mesoamerican turkeys opens up more questions about the people of the region. That, Kemp says, is the best part about studying domesticated animals. "It's really about letting those animals tell us something about the people that were working with them, how they did things," he says.

And the Mesoamericans' uses for turkeys were pretty interesting, according to Cortés account. Keeping a turkey around to feed a captive jaguar, for a later ritual, is quite a feat. Hundreds of years later, our uses for turkeys are a bit blander and more monolithic, raising another question altogether: What do today's roasted and smoked turkeys say about us?