Accessibility links
From Scraps To Snacks: Pulp Left Over From Juice Bars Is Reborn In New Foods : The Salt Juicing is all the rage – and produces lots of leftover fruit and vegetable bits. Once thrown out as compost, that fiber is now sneaking its way into snacks, breakfast foods and even burgers.

From Scraps To Snacks: Pulp Left Over From Juice Bars Is Reborn In New Foods

From Scraps To Snacks: Pulp Left Over From Juice Bars Is Reborn In New Foods 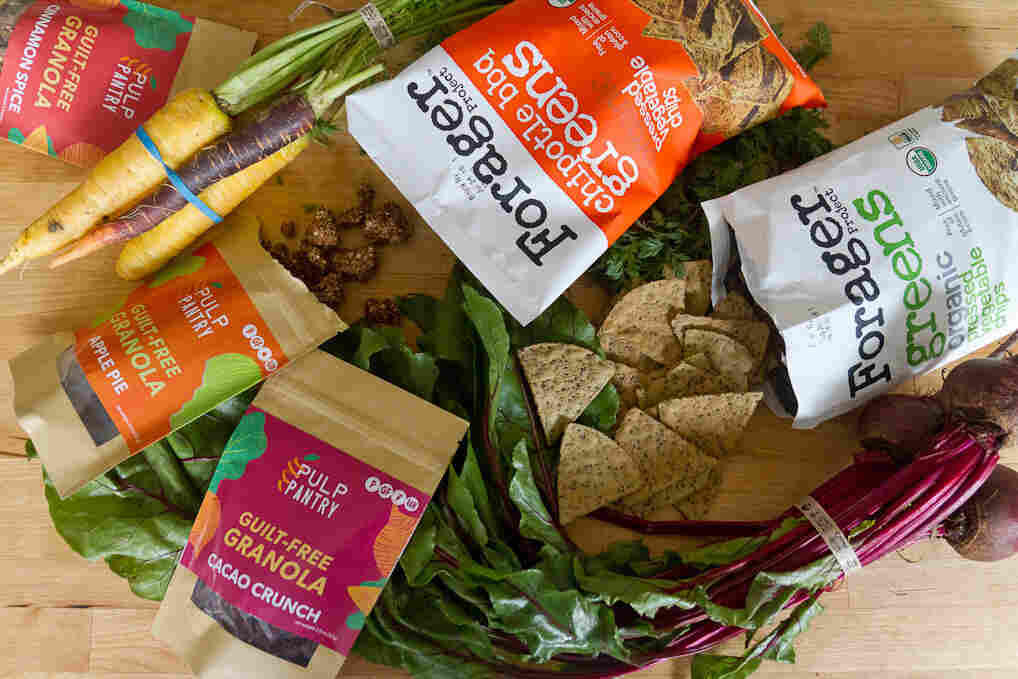 Vegetable chips made by Forager and granola from Pulp Pantry. They're among several companies using the fruit and vegetable fiber left over from juicing in new food products. Grace Hwang Lynch for NPR hide caption 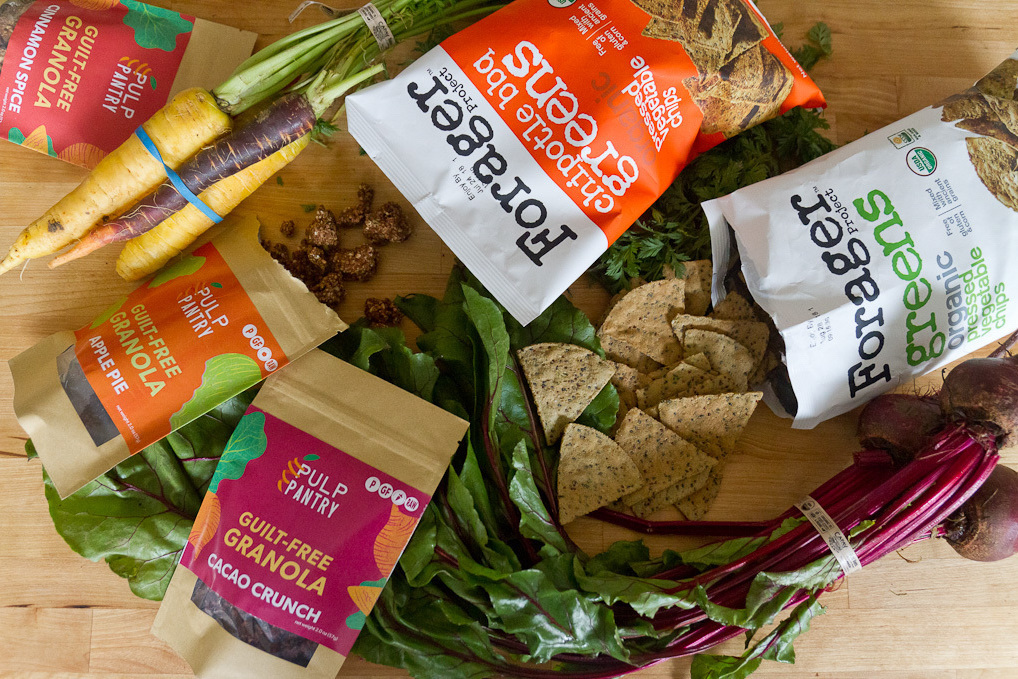 Vegetable chips made by Forager and granola from Pulp Pantry. They're among several companies using the fruit and vegetable fiber left over from juicing in new food products.

Cold-pressed juice fills refrigerator cases at juice bars, health food shops, even big box stores – especially at the beginning of the year, when people are trying to "cleanse" after holiday excess. Fans of these elixirs, extracted at high pressure and low temperatures, believe they contain more nutrients and enzymes than conventional juices; they now generate $500 million in sales worldwide each year.

But what happens to all the parts of the fruits and vegetables that are left over after juicing? Once thrown out as compost, that fiber is now sneaking its way into snacks, breakfast foods and even burgers.

The amount of waste produced by making juice has bothered Los Angeles resident Kaitlin Mogentale since she was a college student. "I saw a friend juicing a carrot," she recalls. "It smelled so good, but so little juice came out."

Artisanal Food Waste: Can You Turn Scraps Into Premium Products?

At the same time, many of her peers hardly ate any vegetables. After graduating from the University of Southern California in 2015, Mogentale teamed up with freshman dormmate Ashley Miyasaki to start Pulp Pantry, with the idea of turning fruit and vegetable pulp into snack foods that would appeal to millennials like themselves. "How do we make it cool to eat fruits and vegetables?" Miyasaki muses.

Mogentale called a dozen juice bars in the LA area and drove around in her own car, picking up 300 pounds of pulp each week. Mogentale, who handles the company's operations, dehydrated the vegetable fiber in a commercial kitchen and turned it into the Pulp Pantry brand of granola, crackers and baking mixes sold at farmers markets.

Rescuing juice pulp from going to waste isn't just the dream of young, idealistic entrepreneurs. Forager, a San Francisco company whose bottled green juices and cashew milk are sold in major chain stores such as Whole Foods and Target, also up-cycles its juice pulp as the main ingredient in its vegetable chips.

"Sixty-five to 70 percent is juice, and the rest is dry pomace," says Forager CEO Stephen Williamson. "That pomace was getting put into compost."

According to Forager co-founder John-Charles Hanley, each week the company processes 4,000 pounds of pomace, the fruit and vegetable fibers left over after pressing. Like the USC graduates, Williamson also began experimenting with the pulp in his own kitchen.

"We took our pomace and dehydrated it and mixed it with ancient grains and seeds," he explains. "I fried a cracker and said, 'This doesn't taste bad.' I tried to make a tortilla and just experimented, literally, on a Wolf stove, as you would expect anybody at home cooking to do."

Forager launched its vegetable chips in 2016, with three varieties: beets, yellow root vegetables and greens. The juice and chip lines are now focused on greens. The first ingredient of the chip is rehydrated pressed vegetables, including cucumber, celery, kale and spinach. Among the other ingredients are sprouted brown rice, sesame seeds, millet, quinoa and amaranth. The finished snack has the texture of a tortilla chip.

Forager is now introducing three more flavors: barbecue, cheese and wasabi. Even though the company projects its pomace output will increase to 6,000 pounds each week, that's still not enough to keep up with the volume needed to fulfill chip orders, so Forager also gets pulp from other juice manufacturers, such as San Diego-based Suja.

Making foods out of juice byproducts does have its challenges. The pomace is wet, heavy and often stringy, and it needs to be refrigerated or frozen and checked for spoilage before being processed. Once in the kitchen, there are other pitfalls to cooking with vegetable pulp. If too much is added to a baked good, the muffin or cookie won't hold together. On its own, vegetable fiber isn't sticky enough to form into items that need to be flexible, like tortillas. Both Pulp Pantry and Forager work around these issues by dehydrating the vegetable fiber and grinding it into a flour-like powder.

Last fall, the Los Angeles-based Mendocino Farms sandwich chain served the limited-edition Rescued Veggie burger, a collaboration with Pressed Juicery. The husband and wife founders of Mendocino Farms, Mario Del Pero and Ellen Chen, often stick to juice diets after days of tasting potential new menu items. That led them to wonder what happens to all the vegetable pulp that juice bars generate.

So the couple reached out to Pressed Juicery, a Southern California-based chain with 70 juice bars on the West Coast and Northeast.

"Historically, we have given the pulp left over" – 72,000 pounds each week – "from our juicing process to local farmers for compost or feed," says Pressed Juicery CEO and co-founder Hayden Slater.

Mendocino Farms chefs took the pulp of beets, carrots, spinach, kale, romaine and turmeric from Pressed Juicery and blended it with onions, shiitake mushrooms and brown rice. Gluten-free tamari and nutritional yeast were added for flavor. "In three months, our guests helped us rescue over 3,400 pounds of vegetable waste," says Del Pero.

While the veggie burger is no longer on the Mendocino Farms menu, Slater says, "We hope this partnership will contribute to the larger narrative around upcycling and inspire others to be mindful of food waste and hopefully create similar partnerships."

Mogentale and Miyasaki of Pulp Pantry are among those continuing to look for ways to salvage the byproducts of juicing. In the past year, the startup has narrowed down its products to grain-free granolas made of almond pulp, along with apple or carrot fiber. The granolas are offered in apple pie, cinnamon spice, and cacao flavors. They are now partnering with The Butcher's Daughter, a juice bar and vegetarian restaurant with locations in New York and Los Angeles, to make its house-branded granola.

While many experts believe that juices – even cold-pressed ones made from kale or beets – are still not as healthy as eating whole fruits and vegetables, the thirst for these health elixirs is expected to grow. A study by Persistence Market Research forecasts cold-pressed juices to grow into a $845 million per year global business by 2024.

While drinking juice or munching on plant-based snacks might not be as healthy as actually eating an apple or carrot, Miyasaki says, "We meet our customers where they're at." The pair is upfront that they are selling a lifestyle – of health and sustainability – as well as granola. Mogentale points to herself as an example of how changing her diet led to bigger life changes. Raised a meat and potatoes girl in the Midwest, she is now a vegan who wears thrift store clothes and drives an electric car.