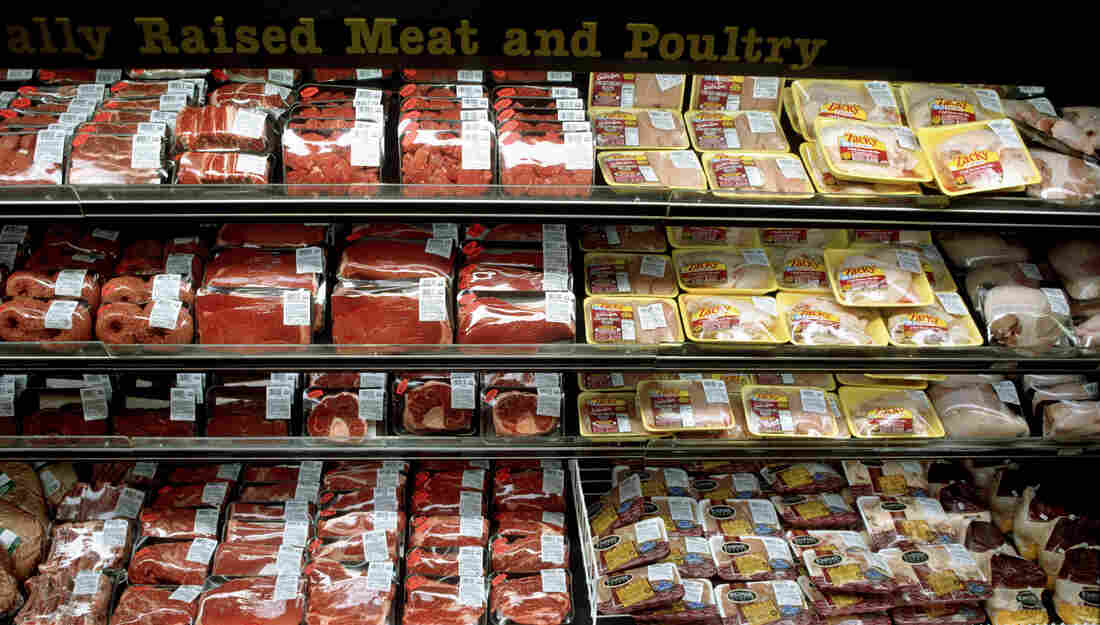 Chicken for sale at a grocery store. A string of lawsuits from wholesalers, retailers and food distribution giants allege that America's biggest poultry processors colluded to raise the price of broiler chickens over a decade. Burke/Triolo Productions/Getty Images hide caption 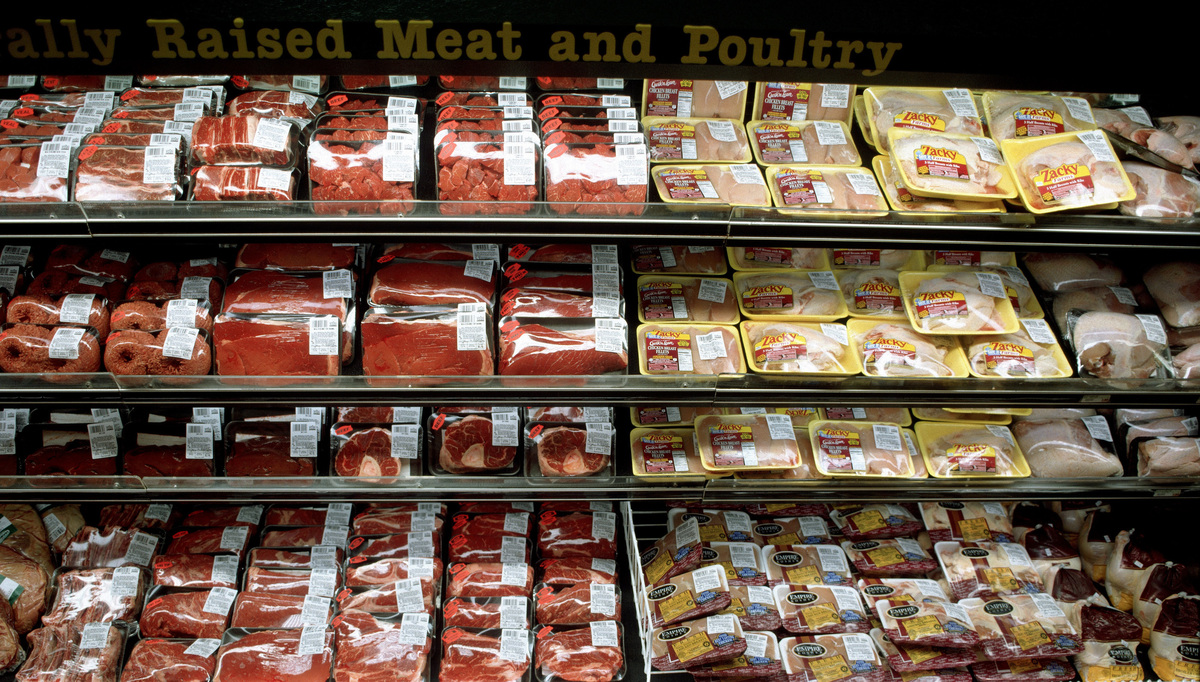 Chicken for sale at a grocery store. A string of lawsuits from wholesalers, retailers and food distribution giants allege that America's biggest poultry processors colluded to raise the price of broiler chickens over a decade.

Some major food companies are accusing Big Chicken of colluding to fix the price of broiler chickens over a 10-year period.

The complaints all allege that since 2008, the poultry companies have engaged in a price-fixing conspiracy, assisted by information-sharing software. Consequently, suppliers and retailers argue that they paid too much for chicken — a burden that has likely been felt by consumers, too.

The $30-billion broiler chicken market comprises virtually all chicken meat consumed in the U.S. Historically, broiler chicken was priced on a boom-and-bust cycle—when prices for chicken went up, so did supply; then, prices would fall. Craig Watts, a former Perdue farmer, said in an interview that "prior to 2008, the chart [of broiler prices] was like an EKG." But then, as Watts puts it, "it's been boom for the past 10 years or so."

The USDA Rolled Back Protections For Small Farmers. Now The Farmers Are Suing

Plaintiffs in these lawsuits allege that starting in 2008, prices for chicken suddenly stabilized and began to rise, even as the inputs those companies sold to farmers fell. Data from the U.S. Department of Agriculture compiled by the National Chicken Council shows that from 2008 to 2014, wholesale prices for chicken rose about 35 cents per pound before falling slightly, compared with a hike of just 24 cents between 2002 and 2008.

Both the farmers that raise chickens for poultry processors and the wholesalers who buy the birds allege that this stabilization was a result of collusion among the companies — in part made possible by a piece of database software called Agri Stats that allowed companies to see each others' data and coordinate pricing.

Several poultry companies have denied the allegations or declined to comment.

Through Agri Stats, poultry companies can share information about production numbers, bird sizes, financial returns and more. The database company gathers information from 95 percent of poultry processors and tracks 22 million birds a day. Companies can then use this information, according to farmers, retailers and distributors, to set a higher price for all their products. In a 2017 report on Agri Stats, Bloomberg found that between 2009 and 2016, Tyson's profit margins grew from 1.6 percent to 11.9 percent. At Pilgrim's Pride, between 2012 and 2015 profit margins grew from 3.8 percent to 12.77 percent.

The first lawsuit to be brought against the processors was a class action brought by a food wholesaler, Maplevale Farms, in September 2016. That lawsuit alleged that from 2008 onward, Tyson and Pilgrim's coordinated their efforts to reduce their broiler stock and forced a "nearly 50% increase in Broiler wholesale prices since 2008, despite input costs (primarily corn and soybeans) falling roughly 20% to 23% over the same time period." Maplevale claimed that consequently, it paid inflated prices for chicken over the course of several years.

Meanwhile, these poultry processors are also under attack from a different direction. The farmers who raise the chickens for the processors are alleging that, in a similar way, these companies are using their market power to short-change them, too.

Several farmers filed a class-action lawsuit against Tyson, Pilgrim's Pride, Perdue, Koch, Sanderson and others in February 2017, alleging that the processors acted as a cartel and used information from Agri Stats to keep farmers' wages down. In April 2017, Chicken Kitchen, a restaurant franchiser, brought a similar lawsuit against Tyson Foods, alleging that the company "conspired to fix, maintain and stabilize the price of Broilers by limiting production with the intent of increasing Broiler prices in the United States." On Jan. 12, the Southern supermarket chains Winn-Dixie and Bi-Lo filed suit against Koch Foods, Tyson, Pilgrim's Pride, and others alleging that the processors restricted supply in order to keep prices high. US Foods and Sysco followed with separate lawsuits on Jan. 30.

The allegations of anti-competitive behavior against Big Chicken come amid extreme consolidation in the industry. Tyson and Pilgrim's Pride alone control 40 percent of the market. Sanderson Farms, Perdue and Koch Foods control another 20 percent.

Farmers have fought for years to reform contract poultry farming. Over 95 percent of chicken production in the U.S. is done under contract. Contract poultry farmers are paid in an opaque "tournament system," which pits farmer against farmer in a zero-sum pay structure. Many farmers allege that poultry companies use the tournament system to suppress farmers' wages and restrict farmers' abilities to move among processors.

Farmers succeeded in getting the Obama administration's Department of Agriculture to take on rule-making that would have addressed some of their concerns. But the resulting efforts — known as the "GIPSA rules" for the arm of the USDA that oversees competition issues in the livestock sector — were killed by the Trump administration last October.

Because these lawsuits are private litigation, they will likely not result in structural reform to the poultry sector, says Peter Carstensen, a law professor at the University of Wisconsin-Madison who researches competition and regulation in the meat sector. He says the lawsuits probably won't have "much effect" on the "very serious problem" of how processors "exploit the farmers who raise their chickens."

But "the first step in reform in terms of their collective seller power is to significantly change the kind of information that Agri Stats can provide to chicken processors," he says. And these lawsuits may set off a sea change in how seriously the public — and regulators — take allegations of ongoing collusion in the poultry processing sector.

This story comes to us from the Food & Environment Reporting Network, an independent, nonprofit investigative news organization, where Leah Douglas is an associate editor and staff writer. A version of the story first appeared in FERN's Ag Insider.