Accessibility links
Tearless Onions Are Real, But Not Many People Have Tried Them Yet : The Salt For years, people have been crying about how chopping onions brings on the waterworks. Well, there's finally a tearless onion, but the allium has not quite caught on with the general public yet. 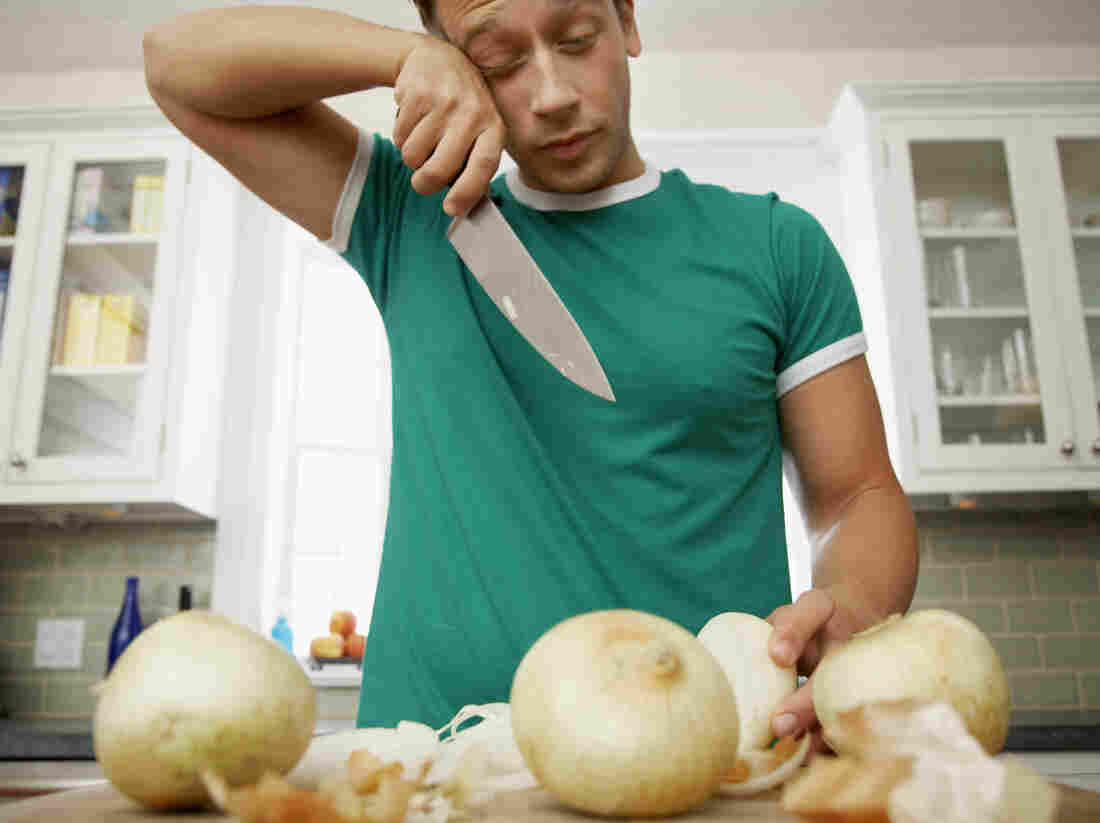 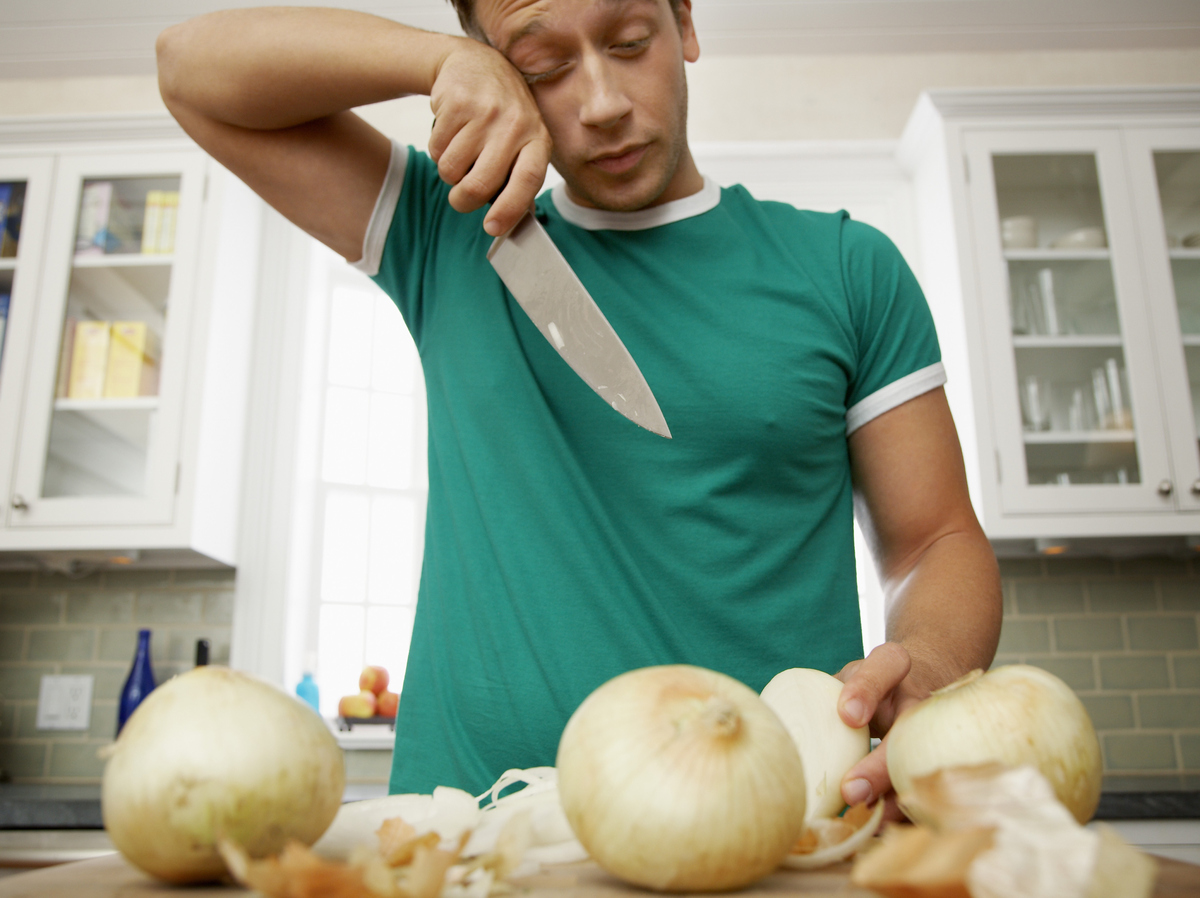 A chemical irritant that onions use to protect themselves against animals is released when we cut them, making us cry.

Using onions to explain away crying is a familiar gag. On The Brady Bunch, housekeeper Alice answers the phone and cries as the caller tells her a sad story. After hanging up she says, "Darn onions," holding up the offending allium. And Rowlf the Dog sang on The Muppet Show, "I never harmed an onion. So why should they make me cry?"

Short of wearing goggles while chopping or the dangerous methods of freezing before cutting or trying to slice raw onions underwater, there hasn't been a way to escape the teary side-effects of taking a knife to them. While some people are immune to the onion's evil powers, plenty of others would love to stop worrying about crying while cooking. The top question on the National Onion Association's FAQ is how to cut onions without turning on the waterworks, and there are more than 3 million results if you ask Google why onions make people cry. But thanks to a new onion invented by Bayer, onion tears may just be a thing of the past.

The Sunion, as the new onion has been named, took 30 years to develop using old-fashioned cross-breeding. Bayer scientists harvested generations of bulbs and looked for the ones that were the least pungent. Thanks to the advent of gas chromatography, they could test for and see the exact composition of volatile compounds in each onion.

In the field, the Sunion seems exactly like any other yellow onion and, if cut open then and there, would be just as likely to make you cry. "The transition happens in storage," says Bayer's senior crop sales manager Lyndon Johnson. This is an important distinction since the onion's strong smell is, in part, a defense mechanism to help it survive underground. Most onions only get stronger the longer they're stored; Sunions get sweeter, milder, and easier on the eyes.

Because the stakes were so high when bringing this onion to market, it went through multiple taste tests, including one by consumers where they gathered people pre-disposed to crying while cutting and asked them to chop Sunions as well as another normal onion and record the level of eye irritation. Testers reported preferring Sunions five to one.

For the initial release, only a few growers in Nevada and Washington were allowed to produce Sunions. In January, Bayer introduced 2.4 million pounds of the new onions to the market and they will only be available until March or April, depending on supply. In five years they hope to expand production to 200 million pounds of Sunions. "We're adding a whole new segment within the retail market," says Johnson. " 'Tearless' and 'onion' haven't gone hand-in-hand before."

It's not easy to find the Sunion yet. Only seven states are carrying the first crop of tear-free onions and only six grocery chains. I had to call multiple locations of the stores selling them before I found an employee that knew what I was talking about and had them in stock. In one case, I drove 20 minutes just to find out that the "Sunions" a helpful grocer had set aside for me was, in fact, a bag of "Funyons" which, he told me, many people had been chopping up to use in dip over Superbowl weekend. The mix-up, while comic, was understandable.

Creating consumer demand, even for a product that solves a problem people have been trying to MacGuyver for generations, doesn't happen overnight. People either don't seem to know that tear-free onions exist or are too incredulous to try them. When I finally found a display full of Sunions, they were placed in a completely different section from the regular onions—near the boxes of cherry tomatoes and bagged potatoes.

Episode 657: The Tale Of The Onion King

"Some retailers do signage really well in the onion category; there are others that could do more to help the consumer," Kim Reddin, director of public relations for the National Onion Association points out.

When I grabbed the onions and went to check out, the cashier looked over the bag, which gleefully proclaims, "Tearless and sweet!" and wondered how it was possible that someone made a tear-free onion and what you would do with them anyway. While Sunions might be a decades-in-the-making breakthrough for the onion industry, they don't seem to merit mention at grocery staff meetings yet.

But on the cutting board, the onions do live up to their promise. The Sunion tastes and looks like a regular, slightly less spicy, onion. My eyes normally water just thinking about chopping onions, but even when I held a sliced Sunion right next to my open and unblinking eyes, I didn't shed a tear.

So far the people most excited about the Sunion are the ones growing and selling them. Reddin brightly proclaimed it to be "a big deal." She thinks the tear-free onion might make consumers give the whole category of onions another look. "Often it's treated as 'just a base' to cooking but once you start understanding there's more to it than just different colors, onions become appealing and you understand their power in cooking."

Understanding how onions can transform the cooking experience can be exciting. But, Reddin added, "I don't know that onions will ever be the next kale."