Accessibility links
New Technology Aims To Take The Sugar Out Of Gelato — Not The Flavor : The Salt The Italian treat requires a certain formula to make it just right, and that means sugar. But as more people try to eat healthy, gelaterias must keep pace. A new machine is a step in that direction. 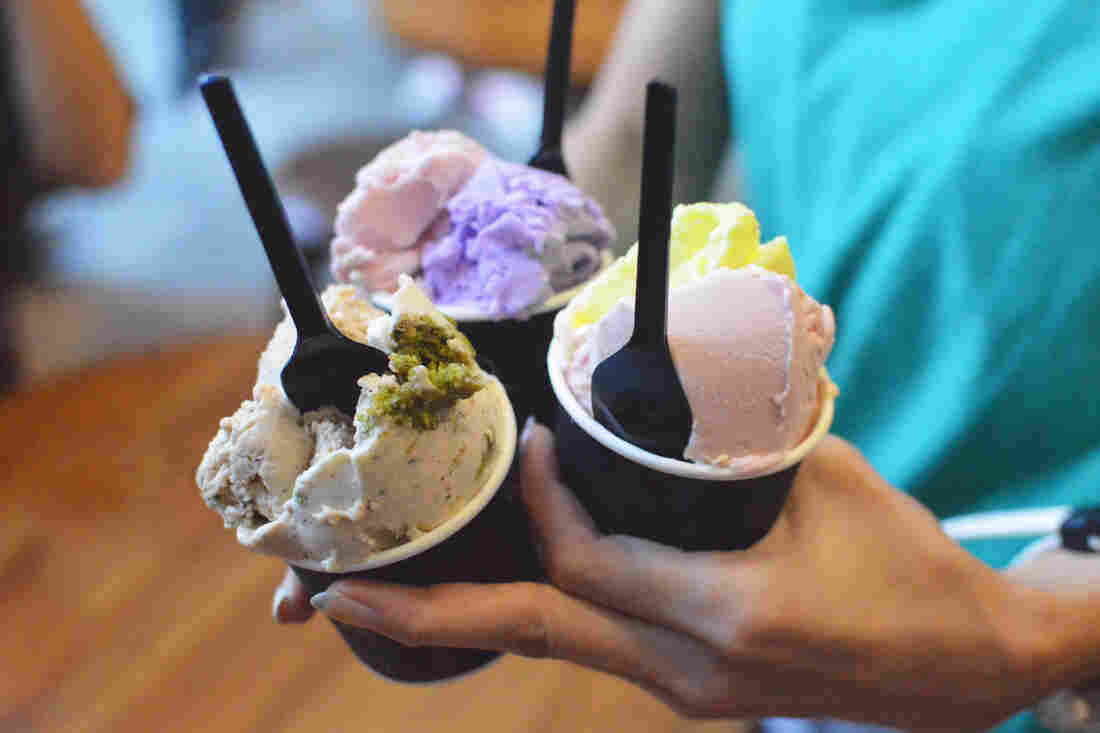 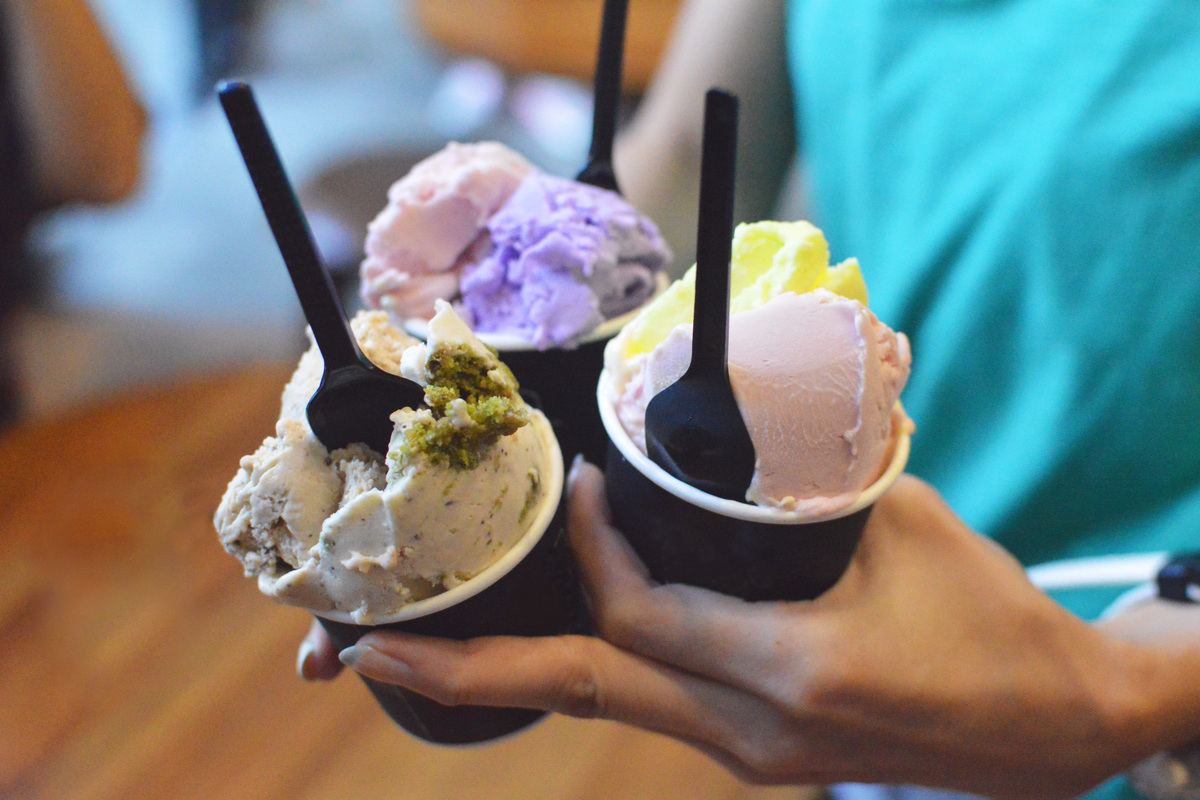 Sugar is considered critical for achieving a smooth and silky consistency in gelato. But new technology is aiming to achieve the same results with less (or no) sugar.

"You have to respect the range," emphasizes Gianpaolo Valli, a senior instructor at Carpigiani Gelato University in Bologna, Italy, who has spent decades drilling aspiring gelato chefs on the right ratio of solids to water in any given recipe. (FYI: Solids need to be between 32 and 46 percent.) If your numbers are off, you're likely to end up with a disaster instead of a dessert.

That's particularly true if you skimp on sugar, which is considered critical for achieving a smooth consistency. Too little, and the result is a hard, icy mass.

Or, at least, that was what used to happen.

In January at Sigep, the annual mega trade show in Rimini dedicated to gelato (and pastry, chocolate and coffee), Carpigiani — the leading manufacturer of gelato machines — unveiled a new technology to "defy the law of balancing." Come to a demonstration, the company beckoned, to see how to make previously "impossible" gelato or sorbet: flavors made with zero added sugars.

Think you've seen that before? Nope, you haven't, says Valli, who's been teaching a special class for the past four years on lowering the glycemic index of gelato. Because of that darned range, sugars have always had to be replaced, usually with substitutes such as stevia or sugar alcohols. That doesn't necessarily lead to bad gelato, but most folks agree there's room for improvement. For instance, consuming sugar alcohols can lead to bloating and diarrhea.

This new innovation instead tackles the issue with precisely calibrated cold and hot gas and advances in computer algorithms. Machines have long relied on temperature control to maintain the small ice crystals that give gelato its signature structure. With Carpigiani's latest program, the machine's batch freezers have become smarter and more responsive, so they're able to recognize an unconventional mixture and make whatever adjustments necessary to keep those small crystals.

Basically, the machine fixes the balance for you, explains Carpigiani Gelato University's Technical Director Luciano Ferrari, who notes the development is the product of years of research and head-scratching. "The diet of the world is going toward a reduction of sugars overall," he says, and that's a problem for a company whose mission is to keep people eating gelato, and often promotes it as a smarter alternative to ice cream, which has a higher fat content.

Walking around Sigep — despite the freshly made waffles and cappuccino foam artist demos — there was no doubt the industry has customer health in mind. (Although some claims of nutrition benefits were dubious.) Across the exhibit hall from Carpigiani sat a booth dedicated to an asphalt-hued flavor called Black Hawaii. Made with vegetable carbon, coconut water and raw cocoa, it's marketed as "detox effect." (Though the evidence that detox diets work is lacking, cutting back on sugar is a good idea.) It's also available in cake form! Just a few feet away, visitors could sample Alvena's Abbronzatissimo, a new base for chocolate gelato spiked with hot pepper, paprika and carrots, as well as "the natural antioxidants from olives." And there was vegan stuff absolutely everywhere. 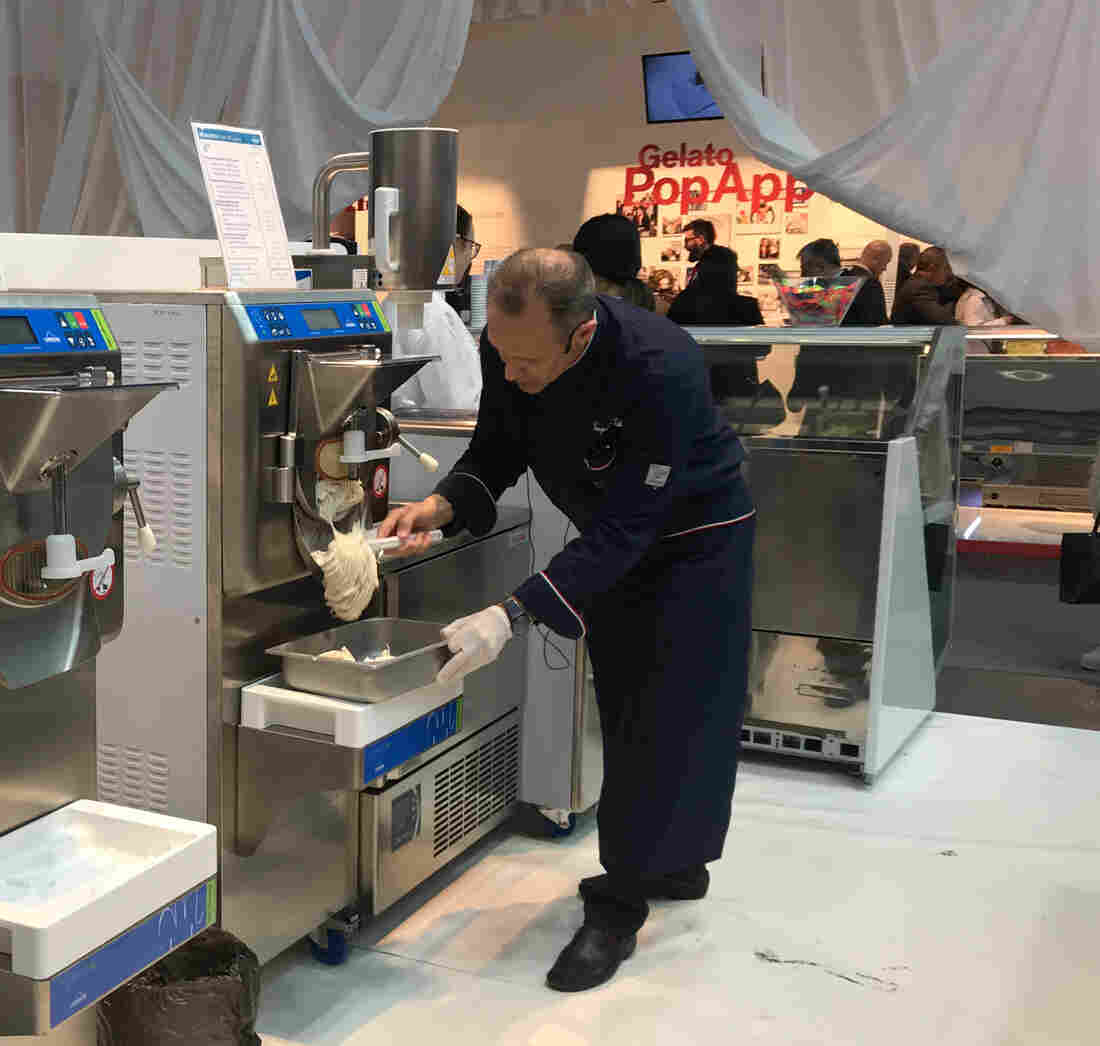 Gianpaolo Valli makes a batch of no-sugar-added hazelnut gelato using one of the new machines, which makes necessary adjustments to keep the small ice crystals that give gelato its signature structure. Vicky Hallett for NPR hide caption

Offering flavors geared toward specific diet concerns broadens a gelateria's appeal, explains Giampaolo Pelli, co-owner of Le Botteghe di Leonardo, a small Italian chain of shops that emphasizes its use of only seasonal fruit, fresh cream and organic eggs. "Because there are, we know, a lot of problems that people have," he says, its menus always include several dairy-free options and at least one stevia-sweetened flavor, which is a hit with diabetics.

Between meetings with suppliers, Pelli was searching Sigep for ways to improve his products. "Every year, you can do a little step," he says.

That seemed to be the mindset of most of the gelato insiders crammed into one of the Carpigiani workshops. Valli launched the session by jokingly lamenting, "In the last days, and weeks, I'm sad for myself." And he explained how his beloved range was no longer necessary — if you're using the "Gelato 0+" setting only available on Carpigiani's high-end, high-efficiency line of products. (A single machine costs between $30,000 and $40,000.)

"Why are we thinking to cancel sugar? Because we know about metabolic disease. Because we don't eat very well," said Valli, who then presented the simple no-sugar-added base he would turn into hazelnut gelato. He poured it into the machine, which did its magical balancing act while he gave a quick rundown on prepping a similar fruit sorbet.

Minutes later, he had a tray of something that looked, well, like gelato. He proudly opened the machine to reveal that no ice had gotten stuck inside. An assistant began distributing cups of the dessert, each stabbed with a tiny spoon.

"Does it stay creamy?" a distributor wanted to know. Valli replied that it does, for up to two days, but noted it should never get too cold because this gelato must be kept a few degrees warmer than traditional varieties. "This gelato is unique, like a baby," said Valli, who wants people to remember that there are still a lot of unknowns. ("This knowledge arrived not years ago. Just one month ago.")

Indeed, anyone itching to find this gelato at a neighborhood scoop shop should probably chill. The technology is just rolling out — through new machines and software updates on older ones — and recipes will require finessing and experimenting. Plus, because of the temperature issue, shops selling the stuff will need a separate display cabinet.

And there was something else worth noting: All of the recipes Carpigiani presented at Sigep, including the fruit sorbets, featured a tiny bit of what Valli calls "intensive sweetness," in this case, an Italian product called Diete.Tic. The structure is perfect without it, he promises, but one consequence of cutting all of the sugar out of a recipe is that the taste suffers. So, in his 3,500-gram batches of gelato — which would normally have 700 grams of sugar — there were just 10 grams of this intensive sweetness.

Polling a few pros in the crowd after the session, they said lack of flavor was a problem even with the additional ingredient. "To get to the perfect product, it still needs a lot of work. But I love the idea of it," said Sonja Ruppert, who works at a gelato shop in Newton, Mass. So did her 10-year-old daughter, Nadin, who couldn't wait to get home and tell her grandmother, who's diabetic. "She's going to appreciate this so much," she said, between bites of a no-sugar-added mango sorbet.

Dessert is not health food

Still, don't expect gelato to ever be classified as a health food, warns Allison Sylvetsky, an assistant professor at The George Washington University's Milken Institute School of Public Health who studies the consumption and affects of sugar-sweetened beverages and artificial sweeteners.

Yes, it's good to cut added sugars from your diet, she says. But dessert is still dessert, even if it's made with fewer calories. "People think it's a get-out–of-jail-free card," Sylvetsky notes, pointing to the example of the hugely popular Halo Top Ice Cream. Its packaging promotes its low-calorie count, and then uses that to encourage people to devour an entire pint at a time. She also calls out bottled smoothies that are 100 percent fruit juice, and pack in 300 calories a bottle. Sylvetsky's advice is to still watch how much you're eating, and consider the potential unintended consequences that might come from consuming sugar substitutes.

As for Valli, he predicts the real future of this technology isn't to banish sugar from gelato completely, but to make it possible to cut the amount by a half or a third. After checking out the Carpigiani workshop, that's what appeals to Monica Maccioni, who runs Bobboi Natural Gelato in La Jolla, Calif., with her husband, Andrea Racca. They have wanted to find ways to reduce sugar, but are wary of substitutes that clash with their philosophy of "working from scratch with real ingredients."

The Italian phrase they like to use when discussing portion size, Racca explains, is "poco poco," which translates as "just a little bit." Maybe that's the best way to change gelato, too.

Vicky Hallett is a freelance writer based in Florence, Italy.