Accessibility links
Hamilton's Aaron Burr Has Some Culinary Advice: Talk Less, Cook More (Creatively) : The Salt On Broadway, Daniel Breaker shines as Alexander Hamilton's greatest rival. In the kitchen, he also creates a stir, sir. But whether acting or cooking, both require perseverance and experimentation. 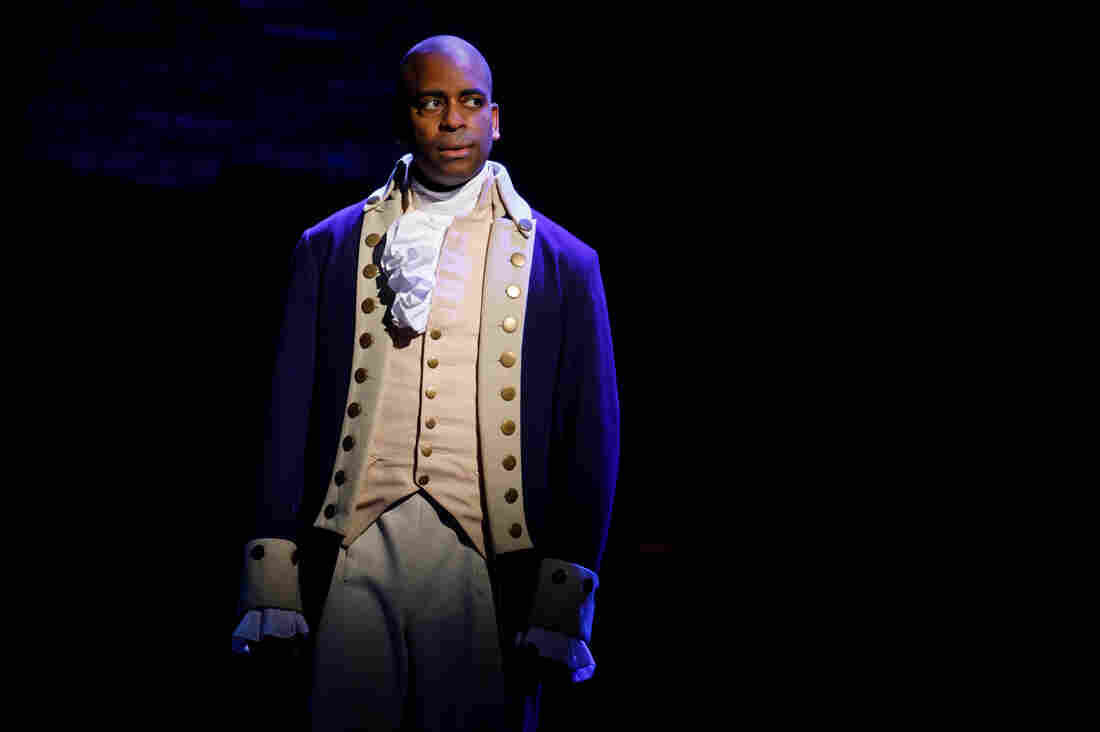 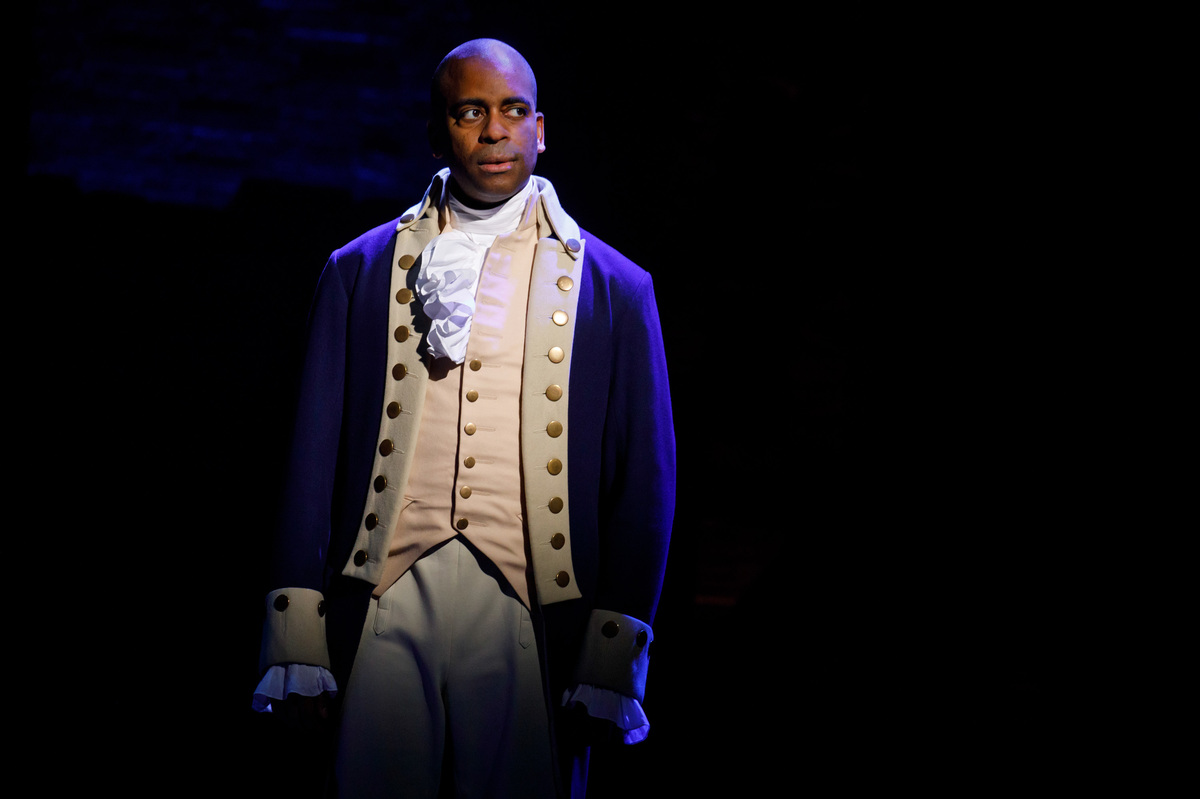 On Broadway, Daniel Breaker shines as Alexander Hamilton's greatest rival, Aaron Burr. In the kitchen, he also creates a stir, sir. But whether acting or cooking, both require perseverance and experimentation.

For Daniel Breaker, who plays the sardonic, soulful Aaron Burr in Broadway's Hamilton, the kitchen is the room where it happens.

Breaker gently snaps the top off a farm-fresh egg using a stainless steel gadget that cleanly cracks a perfect line around the shell, then separates the yolk to make a sabayon. The Italian custard is typically made with egg yolks, wine and sugar, but this version is savory with an Asian flair, whisked with sake and miso into creamy yellow perfection. He carefully spoons the sabayon back into the shell before topping it off with pickled mushrooms, chive-scented whipped cream, and a sprinkling of microgreens. This perfect little egg cup is presented on a bed of pink Himalayan salt.

Then he heads off to his regular job: singing, dancing, and generally tearing our hearts out eight shows a week.

"New York artists aren't supposed to have various genres or loves," says Breaker. "But I see many parallels between theater and food. They both tap into our memories."

You'd be forgiven for thinking that Breaker is a food professional if you just followed his Instagram account (the brief description reads "I like to cook"), which is filled with photographs of what he's cooking up in the Brooklyn home he shares with his wife, award-winning theater director Kate Whoriskey, and their two sons, Rory, 9, and August, 3.

And while there's a certain irony that Breaker sings a line on stage every night about "how the sausage gets made" — and he does, indeed, make homemade sausage — his food creations go far beyond that particular culinary art.

Tuna belly confit with saffron aioli. Concord grape sorbet. Uni cavatelli topped with osetra caviar. If you thought all actors lived on cold Spaghetti-Os out of the can, think again.

"During intermission, I'm usually thinking about what I'm going to make when I get home," Breaker admits.

What is now a creative outlet was initially born of necessity, when Breaker was a young actor fresh out of The Julliard School in 2002. "When you don't have money but you have a lot of time," he says, "you start to realize that pasta is made by just mixing together two eggs and some flour. My cooking went to a certain level of elevation when I was unemployed."

Once the roles started coming in, from Puck in A Midsummer Night's Dream with Washington, D.C.'s Shakespeare Theatre Company to Donkey in Broadway's Shrek The Musical, he was able to move into an apartment with a bigger kitchen — and, happily, an automatic dishwasher — that allowed for even more culinary exploration.

But it was seeing actor and musician Steve Martin speak at an event several years ago that really got Breaker thinking about taking a deep dive into his passion for food. "Steve Martin was talking about the history of the banjo," says Breaker, "and people in the audience were like, 'Tell a joke!' — I think some tickets even got refunded afterwards. But I really loved hearing about his passion for the banjo. I learned a lot that I never knew, or that I even knew I wanted to know."

Which probably explains, to some extent, why Breaker recently became the proud owner of 30 dozen eggs. 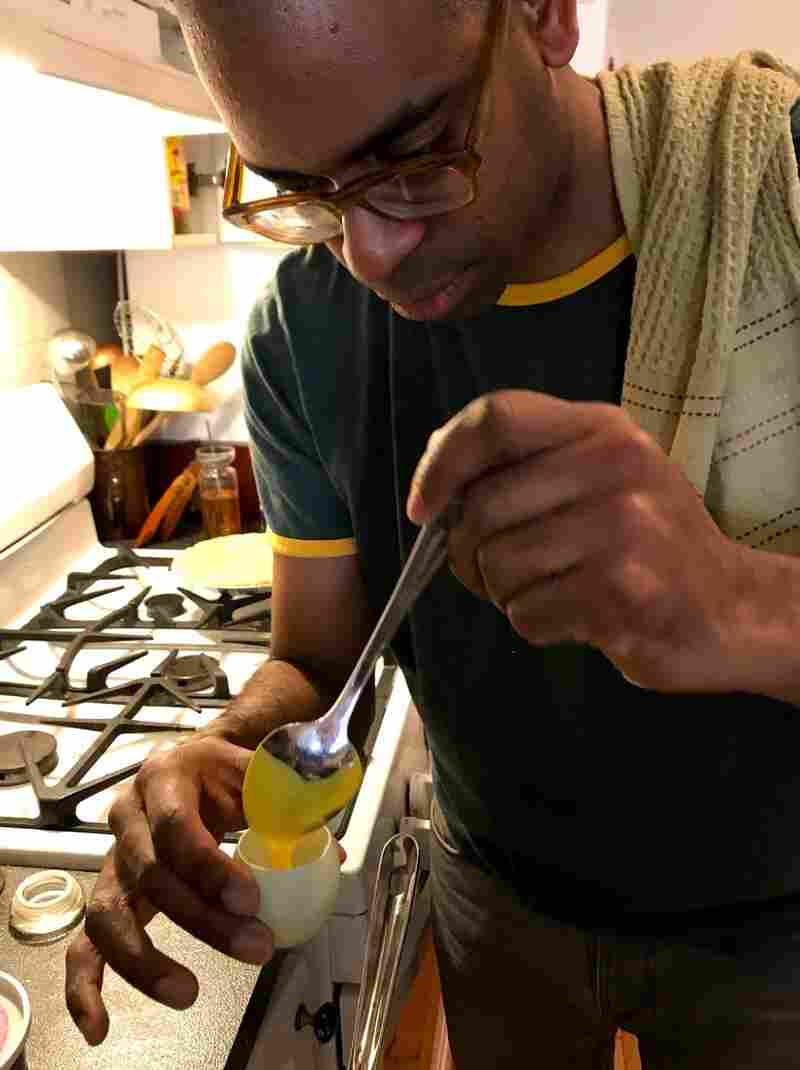 Breaker makes a savory take on sabayon, a custard, in his Brooklyn kitchen. Kristen Hartke for NPR hide caption

After a friend told him about eggs from free-range chickens foraging on Wayward Creek Farm in upstate New York, Breaker fell in love with their rich flavor and wanted to experiment. A lot. So he bought 360 eggs, keeping some at home and others backstage at New York City's Richard Rodgers Theatre, home of Hamilton, where fellow cast members can pick up a half-dozen or so for themselves at the end of the night. "I love when people take the eggs home, and come back the next day and say, 'Man, those were the best eggs I ever had.'"

For Breaker, it's like learning about the banjo from Steve Martin — maybe you didn't know you wanted to have really good eggs, but then you did and it changed how you thought about eggs. It's why he's perfecting his sabayon technique, in much the same way that an actor rehearses so that a spark of spontaneity can still exist even within scripted dialogue.

"There's a high level of improvisation in food," says Breaker, "just like there is in theater and music, but it's all backed up by technique. What I love about live theater is that you're trying to perfect it, figure out, 'How do I make this better?' I think about [Danish chef] René Redzepi, who has this real curiosity in his food, and I look at ingredients and wonder, 'What can I do with these?' — even if it's something I've never cooked before."

The actor's own curiosity and quest for perfection is evident in his 10-year journey to fine-tune a recipe for sweet potato gnocchi that he and Whoriskey made one year as part of her birthday dinner. "It was a terrible failure," Breaker laughs, "and we became obsessed with it. We'd talk about it all the time: 'Maybe it would work with this, what if we tried that?'" Over the years, the addition of gluten-free flour created the right texture, while goat's milk ricotta added a bit of sharpness, making the homegrown recipe a family favorite that's typically served with a brown butter sage sauce and Granny Smith apple salad.

"Maybe if I'd gone to [culinary] school, it wouldn't have taken a decade," says Breaker ruefully.

A self-described Army brat, Breaker moved with his family 13 times while growing up, including a stint in what was then West Germany. Living in a home off-base surrounded by apple trees, they'd pick apples by the bushel to have them pressed into cider and sealed in repurposed Fanta soda bottles.

"Wherever we went, my mom would buy whatever was fresh and local and combine it with her strong Southern roots," Breaker says. "I really think that's what began my love of terroir. When I travel, I like to get out to the farmers markets and get into the flavor of that place."

Tapping into flavors, like inhabiting a role, or hitting that perfect note, is perhaps the common thread that runs throughout Breaker's passions and fuels his self-directed learning.

"In theater," he says, "there are certain moments that can be a real surprise, when the audience suddenly connects with a character in a way they didn't expect. I think that I'm doing the same thing with my food — I surprise myself with it. Basically, this is the comfort food that I didn't know that I grew up with, taking familiar flavors and rearranging them in new ways. That's the joy of it."