Accessibility links
Trump Administration Wants To Decide What Food SNAP Recipients Will Get : The Salt The proposed changes to food stamps, now called SNAP, would be drastic: About half the benefits would be boxed-up, nonperishable foods. Recipients would lose a lot of their ability to pick their food. 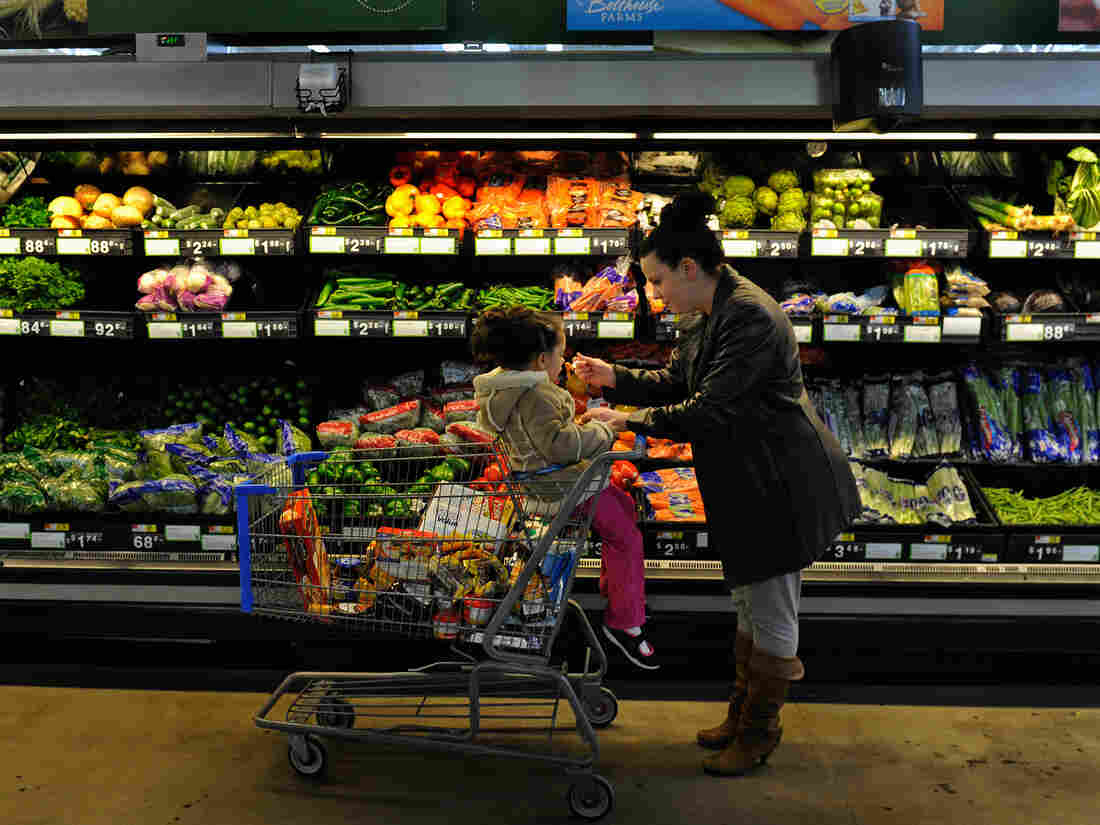 Rebecka Ortiz offers her daughter a pasta sample at the store where she was using her food stamps to stock up on food for her family in Woonsocket, R.I. The Trump administration is proposing drastic changes in the "food stamp" program, now called SNAP. People getting that aid would lose much of their ability to choose the food they buy. Michael S. Williamson/The Washington Post/Getty Images hide caption 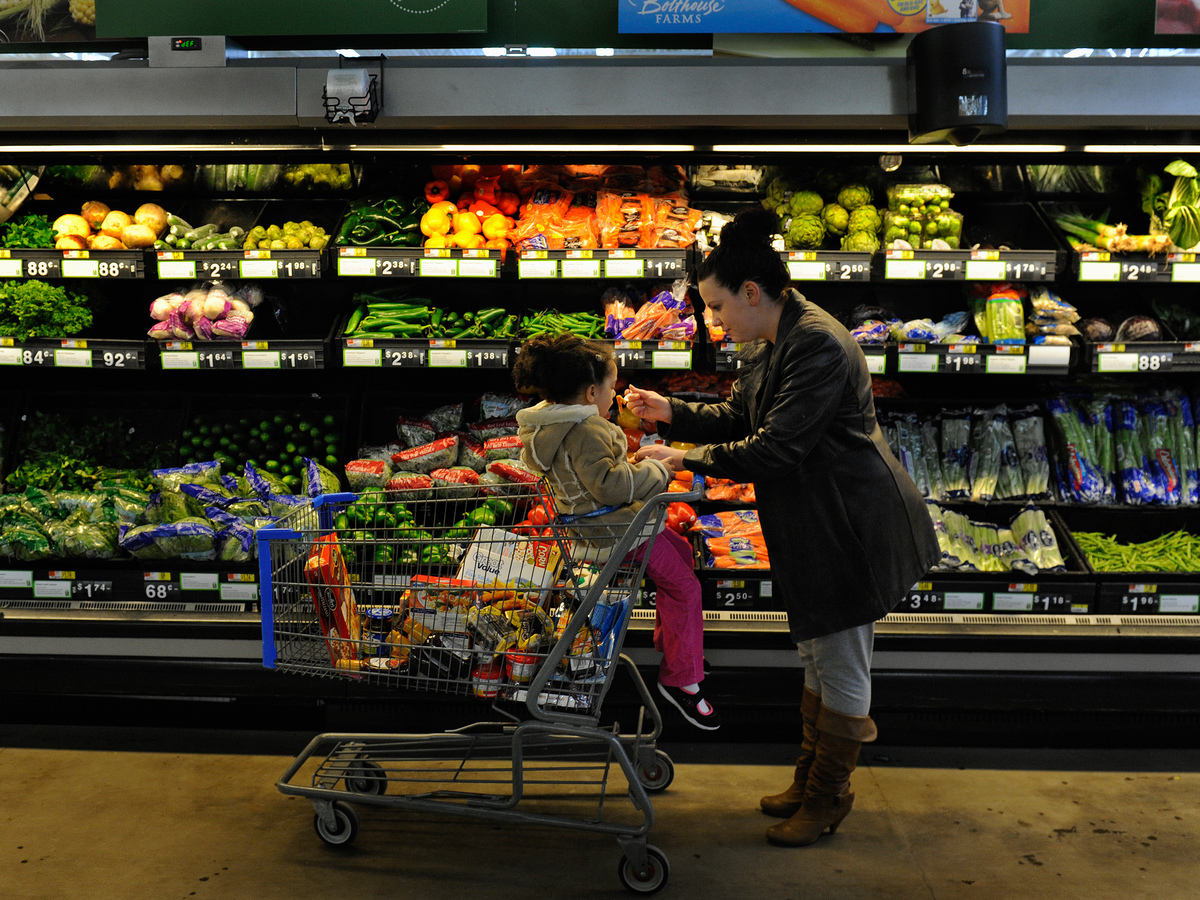 Rebecka Ortiz offers her daughter a pasta sample at the store where she was using her food stamps to stock up on food for her family in Woonsocket, R.I. The Trump administration is proposing drastic changes in the "food stamp" program, now called SNAP. People getting that aid would lose much of their ability to choose the food they buy.

The Trump administration is proposing a major shake-up in one of the country's most important "safety net" programs, the Supplemental Nutrition Assistance Program, formerly known as food stamps. Under the proposal, most SNAP recipients would lose much of their ability to choose the food they buy with their SNAP benefits.

The proposal is included in the Trump administration budget request for fiscal year 2019. It would require approval from Congress.

Under the proposal, which was announced Monday, low-income Americans who receive at least $90 a month — just over 80 percent of all SNAP recipients — would get about half of their benefits in the form of a "USDA Foods package." The package was described in the budget as consisting of "shelf-stable milk, ready to eat cereals, pasta, peanut butter, beans and canned fruit and vegetables." The boxes would not include fresh fruits or vegetables.

Currently, SNAP beneficiaries get money loaded onto an EBT card they can use to buy what they want as long as it falls under the guidelines. The administration says the move is a "cost-effective approach" with "no loss in food benefits to participants."

The USDA believes that state governments will be able to deliver this food at much less cost than SNAP recipients currently pay for food at retail stores — thus reducing the overall cost of the SNAP program by $129 billion over the next 10 years.

This and other changes in the SNAP program, according to the Trump administration, will reduce the SNAP budget by $213 billion over those years — cutting the program by almost 30 percent.

Joel Berg, CEO of Hunger Free America, a hunger advocacy group that also helps clients access food-assistance services, said the administration's plan left him baffled. "They have managed to propose nearly the impossible, taking over $200 billion worth of food from low-income Americans while increasing bureaucracy and reducing choices," Berg says.

He says SNAP is efficient because it is a "free market model" that lets recipients shop at stores for their benefits. The Trump administration's proposal, he said, "is a far more intrusive, Big Government answer. They think a bureaucrat in D.C. is better at picking out what your family needs than you are?"

Douglas Greenaway, president of the National WIC Association, echoed that sentiment. "Removing choice from SNAP flies in the face of encouraging personal responsibility," he said. He says "the budget seems to assume that participating in SNAP is a character flaw."

It isn't clear how billions of dollars' worth of food each year would be distributed to millions of SNAP recipients who live all over the country, including dense urban areas and sparsely populated rural regions. The budget says states will have "substantial flexibility in designing the food box delivery system through existing infrastructure, partnerships or commercial/retail delivery services."

Critics of the proposal said distributing that much food presents a logistical nightmare. "Among the problems, it's going to be costly and take money out of the [SNAP] program from the administrative side. It's going to stigmatize people when they have to go to certain places to pick up benefits," says Jim Weill, president of the nonprofit Food Research and Action Center.

Stacy Dean, vice president for food assistance policy at the Center for Budget and Policy Priorities, called the proposal "radical and risky." The idea that the government could save money by distributing food itself, she said, is "ill-informed at best."

It isn't clear whether the boxes will come with directions on how to cook the foods inside. "It could be something that [SNAP recipients] don't even know how to make," notes Miguelina Diaz, whose team at Hunger Free America works directly with families to help them access food aid. "We deal with different people of different backgrounds. Limiting them by providing them a staple box would limit the choices of food they can prepare for their families."

According to Dean, from CBPP, the Trump administration wants to trim an additional $80 billion from the SNAP program by cutting off about 4 million people who currently receive food assistance. Most of them live in states that have decided to loosen the program's eligibility requirements slightly. Under the administration's proposal, states would no longer be able to do so.

Agriculture Secretary Sonny Perdue said in early December that he wanted states to have more flexibility in doling out SNAP, announcing the agency wanted to hear about programs from states that don't increase the cost of the program and will combat what he said is fraud and waste. At the National Grocers Association conference over the weekend, Perdue said the budget has "common-sense reforms that call for greater consistency across nutritional programs."

Nutrition programs, including SNAP, made up about 80 percent of the USDA's budget in the most recent farm bill, making it the largest portion of agency spending. About 44 million people participated in SNAP each month in 2016, at an annual cost of $70.9 billion. Nearly two-thirds were under 18, over 60 or disabled, according to the USDA.

Congress largely ignored Trump's proposed budget for SNAP last year, when he wanted to cut the funding by a quarter. This time, it's a farm bill year, meaning many budgetary decisions will be made among the House and Senate agriculture committees.

Several critics we spoke with expressed skepticism that the proposed SNAP changes would pass in Congress. Even so, Weill says, "Whenever you see proposals like this that attack [SNAP] ... it harms the program even if it doesn't pass, in the long term reducing support for the program and stigmatizing people who use it."