Accessibility links
U.K. Supermarkets To Ban Energy Drinks For Shoppers Under 16 : The Salt In March, many U.K. grocery stores will check IDs for energy drink purchases. Teachers, nutritionists and public health researchers have called for the measures — as has celebrity chef Jamie Oliver. 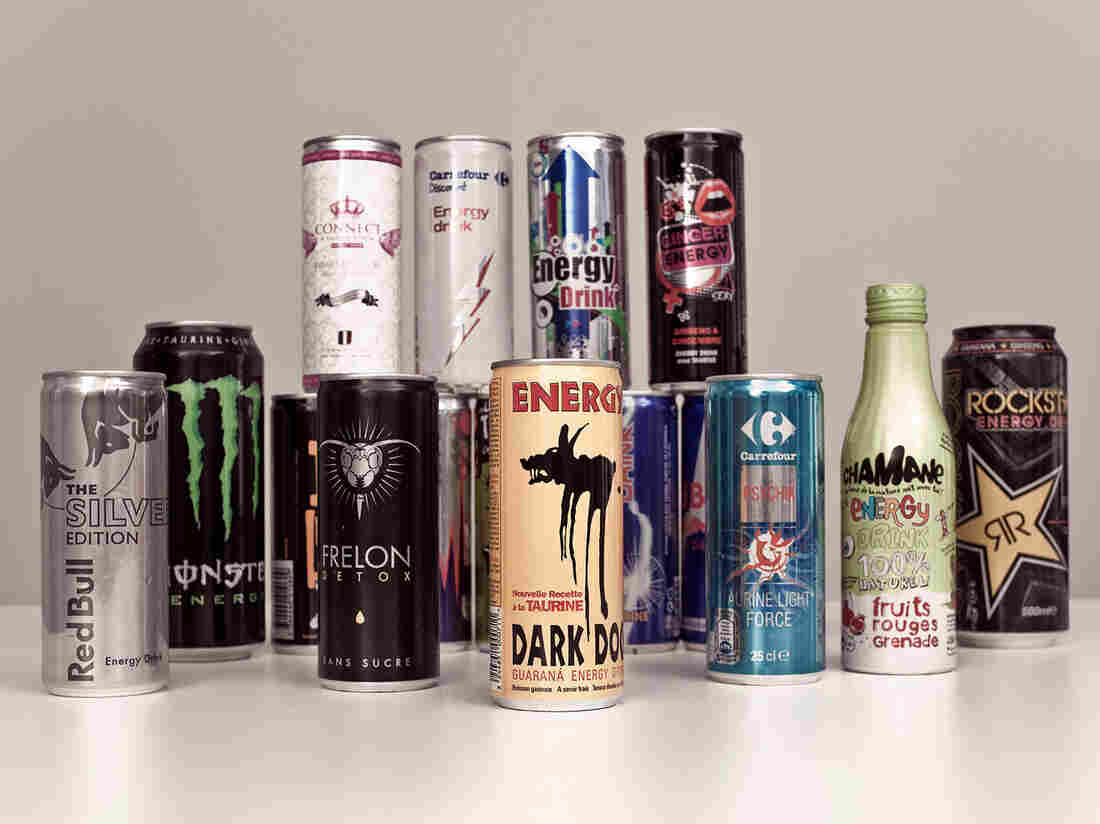 Next month in the U.K., anyone at a major grocery store looking to buy a soft drink with more than 150 mg of caffeine per liter will need to present an ID. Stephane Grangier/Getty Images hide caption 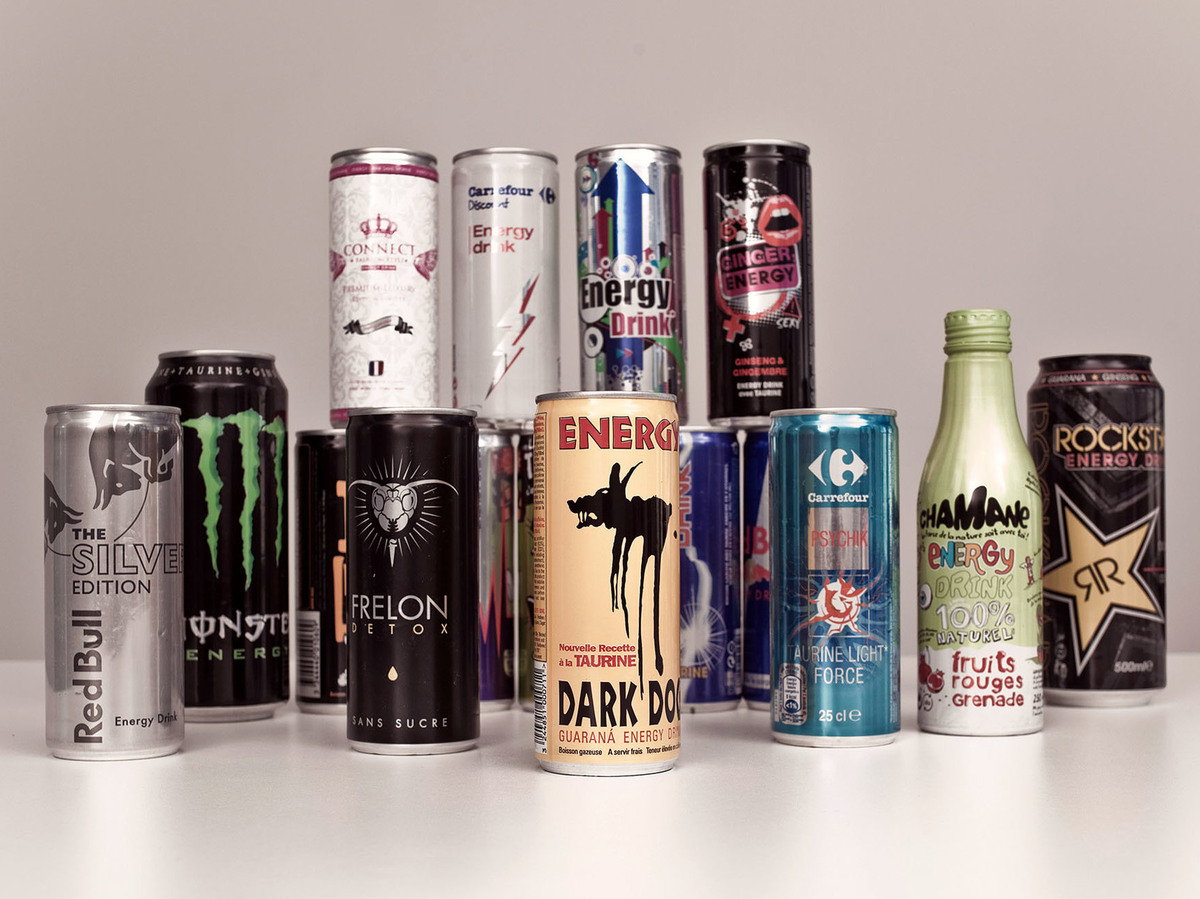 Next month in the U.K., anyone at a major grocery store looking to buy a soft drink with more than 150 mg of caffeine per liter will need to present an ID.

Next month, several chain supermarkets in the U.K. will stop selling energy drinks to customers under 16. Anyone looking to buy a soft drink with more than 150 mg of caffeine per liter — a limit targeting drinks like Monster and Red Bull — will need to present an ID.

The retailer Waitrose announced its new energy drink restrictions first, in early January. "These drinks carry advice stating that they are not recommended for children, so we're choosing to proactively act on that guidance, particularly given the widespread concerns which have been raised about these drinks when consumed by under 16s," Simon Moore, Waitrose's director of corporate social responsibility, said in a statement. Sainsbury's, Morrisons, Lidl, Coop, Asda, Aldi and Tesco followed with their own bans on selling the drink to children, which will all roll out at the beginning of March.

As Moore mentioned, European Union and British regulations already require drinks with this much caffeine to sport an extra label stating: "High caffeine content. Not recommended for children or pregnant or breast-feeding women." And while a nationwide soda tax will go into effect in the U.K. in April, banning so-called "under 16s" from buying energy drinks is a voluntary measure that grocery stores have taken up this year.

But the idea of checking IDs for energy drink purchases has been rumbling around for a while. Morrisons tested this initiative in 2014, then ended the pilot at the end of that year.

Now, U.K. grocery stores seem to be responding to pressure from a couple of different groups.

Celebrity chef Jamie Oliver, who has long championed anti-obesity and nutrition efforts, recently mounted a campaign against energy drinks for kids. He appeared on Good Morning Britain in November, telling the anchors that since the advent of energy drinks, some children consume "about 14 espresso shots worth of caffeine per day." He ran a spot on his own show, Friday Night Feast, detailing the dangers energy drinks pose for kids' health and their prospects in school. He also started a hashtag on Twitter: #NotForChildren.

The National Association of Schoolmasters Union of Women Teachers has blamed energy drink guzzling for poor behavior in school. The group has called for research in the area and supported the grocery store restrictions.

Policy researchers have called for energy drink legislation. Fuse, the Centre for Translational Research in Public Health, advocated for a law restricting energy drink sales to kids after finding that energy drinks are widely available for students as young as 11 years old. Another group, Action on Sugar, which runs nutrition-focused campaigns from Queen Mary University of London, has also rallied for regulation of these drinks. Although Action on Sugar focuses on sweeteners, the high caffeine in energy drinks worries them, too, says Kawther Hashem, a nutritionist and researcher for the group. "Why is it that we have a warning label, but children can buy these products?" she says.

Overall, it's probably a good idea to pause energy drink sales to children, says Jennifer Temple, a nutrition researcher at the University of Buffalo who has studied how caffeine affects kids. "We've seen kind of an explosion of energy drinks on the market over the past decade and a half, without really a whole lot of empirical data to understand what consuming these high amounts of caffeine can do, especially to children and adolescents," she says.

As they've boomed onto the market, energy drinks have been linked to emergency room visits, as well as a number of high-profile deaths, although it's impossible to say definitively that energy drinks are the only culprit in those extreme situations.

Small to moderate doses of caffeine haven't had a huge effect on kids in Temple's research, but she's not enthusiastic about supplying children with energy drinks. A major aim of caffeine — preventing sleep — can interfere with the rest kids need to grow, think and function. "There's no reason why kids need this caffeine," she says. "The sleep effects alone are something that we should be mindful of."

Oliver, teachers and those policy groups count the energy drink bans for kids in grocery stores as a victory, but they're not a perfect, overarching solution. "The issue with it is that these products will still be bought in convenience stores and other small stores," Hashem says. So while these are positive steps, she says she's still hoping a national law will eventually come into effect.