Accessibility links
Eureka! California-Grown Coffee Is Becoming The State's Next Gold Mine : The Salt Sure, a cup of California-grown coffee sells for about $18 a cup, but people are buying it. The niche industry is booming with no signs of slowing, and the state's farmers still can't meet demand. 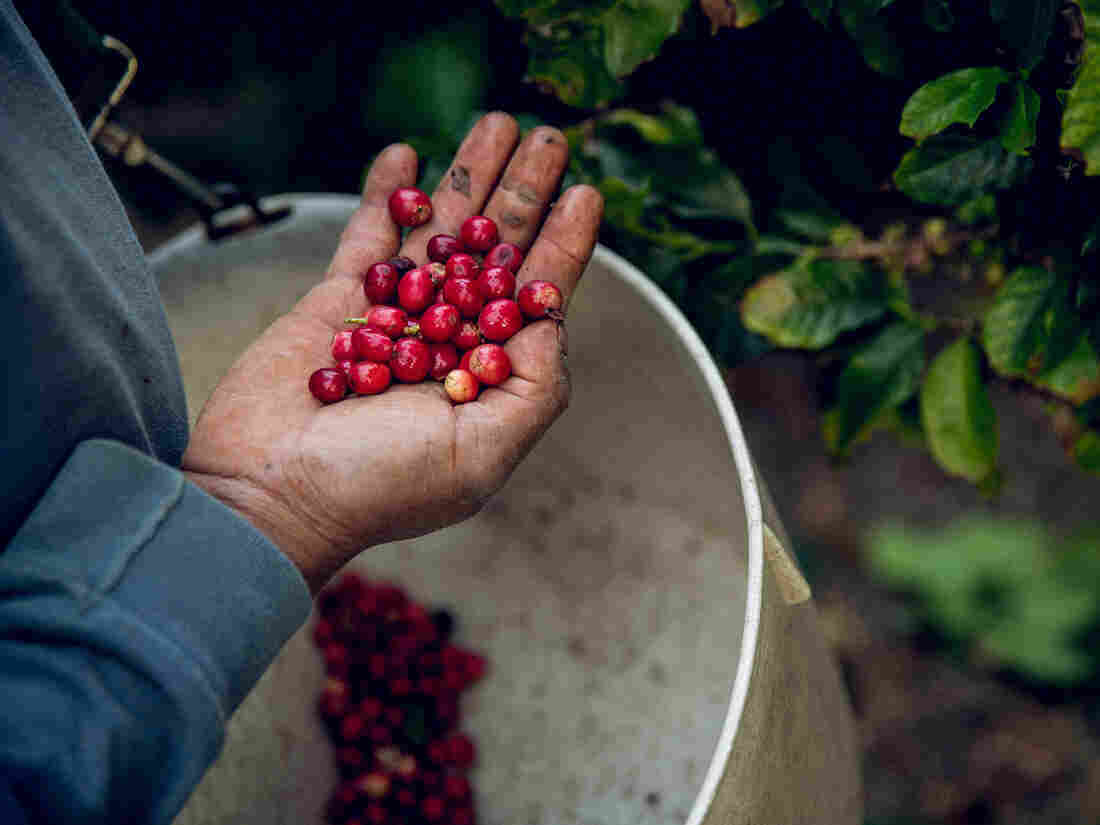 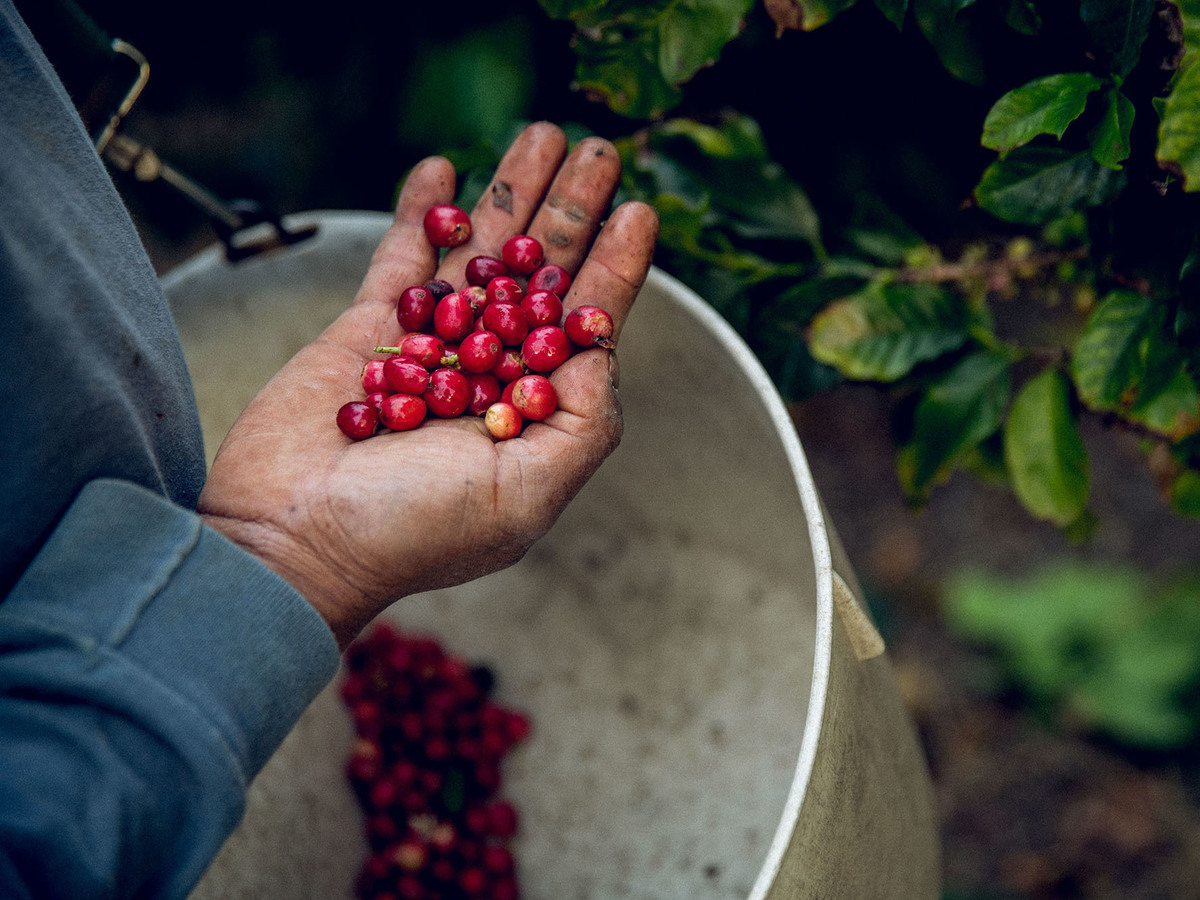 Coffee cherries are harvested at Good Land Organics, a farm in Goleta, Calif.

In most coffee shops, you can choose a cup of joe brewed with beans from countries like Ethiopia, Colombia, Costa Rica and Yemen. Now, a new crop of coffee growers is working to get coffee brewed from California-grown beans included on those menus.

When Mark Gaskell moved to California after working in coffee-growing regions in Central America, he noticed coffee plants growing in gardens and wondered if large-scale production was an option.

In 2001, Gaskell, farm advisor for the University of California Cooperative Extension, established transplants and discovered that the sub-tropical plants could thrive in the Golden State. He recruited Jay Ruskey of Good Land Organics to help with trials, hoping coffee could be a valuable niche crop to help sustain small farms.

"We learned that we had the ability to grow very good coffee with a very unique flavor," Ruskey explains. "There is a misconception that you can't grow coffee outside the Tropic of Cancer."

Local farmers embraced the idea of California coffee and started planting their own crops. The burgeoning state industry now boasts 30 farms growing more than 30,000 coffee trees, according to the University of California's Division of Agriculture and Natural Resources.

At least two dozen more farms are expected to begin growing coffee in 2018.

Although coffee farms are scattered throughout California, the biggest concentrations are in Santa Barbara and San Diego counties. Most of the farms are fewer than five years old and their beans are just starting to mature. As that happens, Gaskell expects production to double year over year.

"The California coffee industry is growing very quickly," he says.

Blue Bottle coffee buyer Charlie Habegger paid a premium for the beans — $60 per pound compared with $20 per pound for Hawaiian-grown beans and $5 per pound (or less) for coffee beans imported from Ethiopia — and introduced it in cafes in California, New York, Boston, Miami and Washington, D.C.

A single cup sold for $18. The coffee sold out within two weeks.

"Curiosity was the number one factor that made people want to try it," Habegger says. "Having coffee produced in [mainland] America is almost too good to believe."

The price might seem steep — especially given that a tall Pike Place Roast at Starbucks retails for $1.50 — but it's not the most expensive coffee on the market.

Hacienda La Esmeralda made headlines last year when it sold for $601 per pound at auction, the highest price ever paid for green coffee. Klatch Coffee in Rancho Cucamonga, Calif., sold the record-breaking coffee for $55 per cup.

Even Starbucks has introduced premium-priced coffees. Some brews from Starbucks Reserve, a collection of rare, small-batch coffees served in its special reserve stores in Seattle, New York, Chicago, Milan, Tokyo and Shanghai, reportedly retail for $10 per cup.

Thanks to higher costs for land and labor in California, Habegger notes that the profit margins on a pound of coffee are the same in California as conventional coffee-growing regions like Ethiopia and Mexico, where production costs are much lower. The rationale doesn't prevent sticker shock.

"To people that are used to drinking cheap coffee, it might seem like an abomination," he says. "But, relative to all of the other things we're willing to spend $18 on — like a glass of wine or small-batch bourbon — investing in the memorable flavor experience of a great cup of coffee is worth it."

The California farmers growing coffee think it's worth it, too.

Avocado growers like Andy Mullins of Mullins Family Farm in Temecula are among the most enthusiastic coffee farmers.

Mullins planted 1,000 coffee trees under the canopies of the avocado trees on his 4-acre farm. The fertilizer and irrigation needs of both crops are the same, but coffee produces a superior profit. Farmers earn about 37 cents per pound of avocados, according to the California Avocado Commission.

"Specialty coffee sells for $60 to $600 per pound; there is not another specialty crop that produces that kind of result," he explains. "The market has embraced a retail price that has allowed coffee production in California."

Even though the number of California coffee growers is expanding rapidly, Gaskell is confident that the drink's continued status as a specialty crop will keep prices stable for farmers.

"The market is so huge compared to the volume we have," he says. "It's going to be a very long time before we can even begin to meet the demand."