Accessibility links
French Food Waste Law Changing How Grocery Stores Approach Excess Food : The Salt Two years ago, France introduced a law to force supermarkets to donate unsold food to charities and food banks. Skeptics called it unworkable at the time, but there are signs the effort is succeeding. 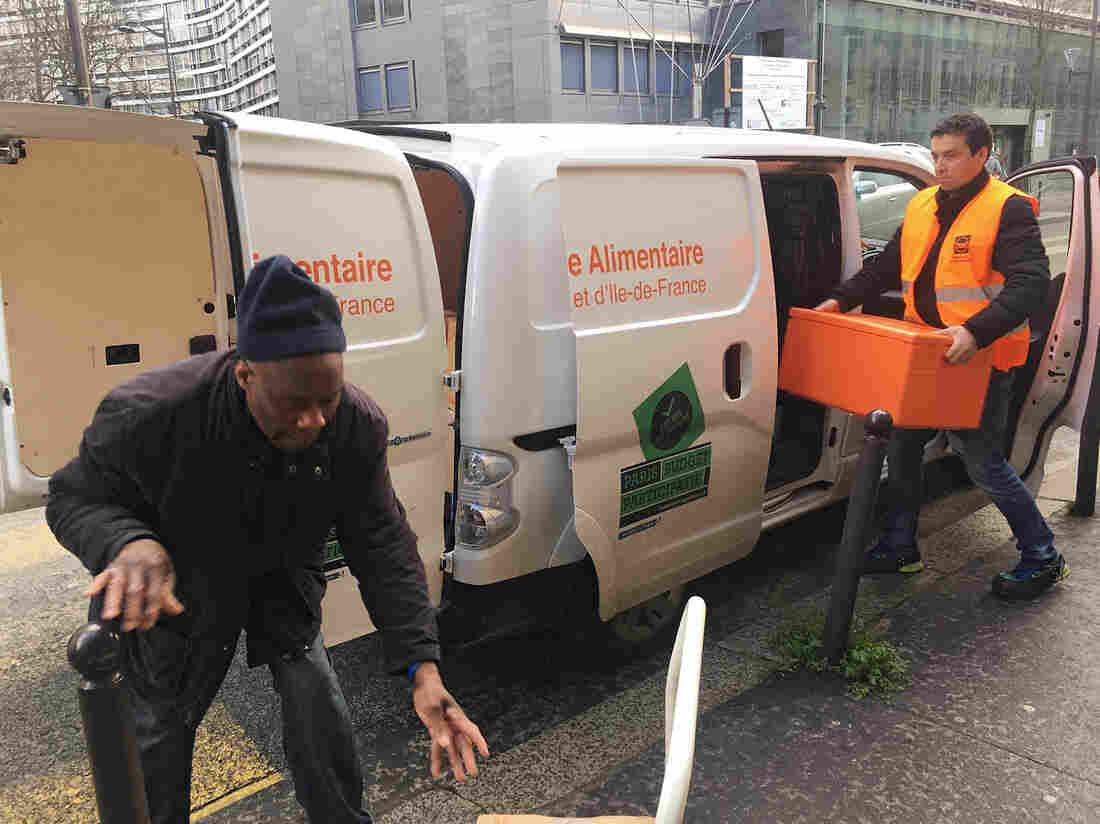 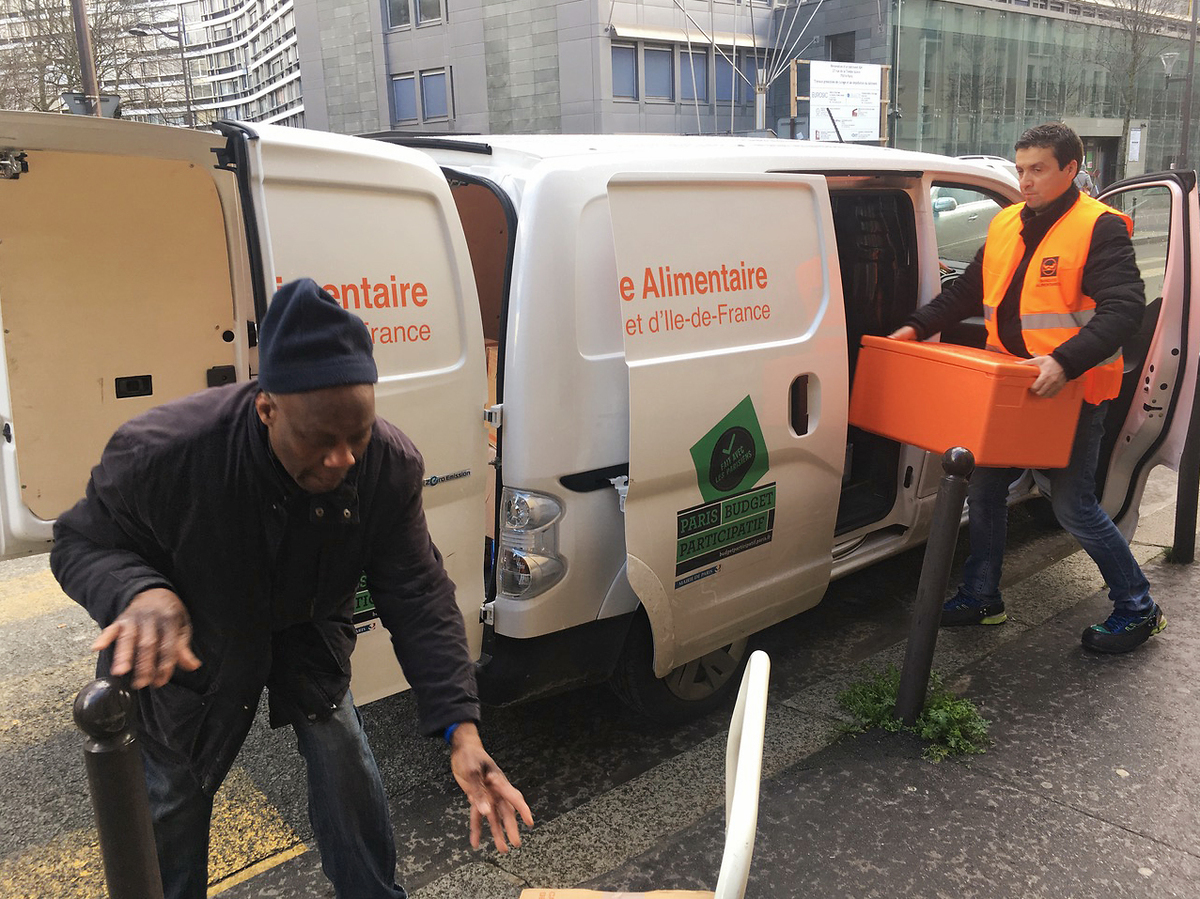 Ahmed "Doudou" Djerbrani, in the orange vest, delivers the food French supermarkets must donate to food banks by law.

Every morning at a supermarket called Auchan in central Paris, Magdalena Dos Santos has a rendezvous with Ahmed "Doudou" Djerbrani, a driver from the French food bank.

Dos Santos, who runs the deli section of the store, is in charge of supervising the store's food donations. She sets aside prepared dishes that are nearing their expiration date.

Opening a giant fridge, Dos Santos shows what else the store is giving away – yogurt, pizza, fresh fruits and vegetables, and cheese.

But giving leftover food to charity is no longer just an act of goodwill. It's a requirement under a 2016 law that bans grocery stores from throwing away edible food.

Stores can be fined $4,500 for each infraction. 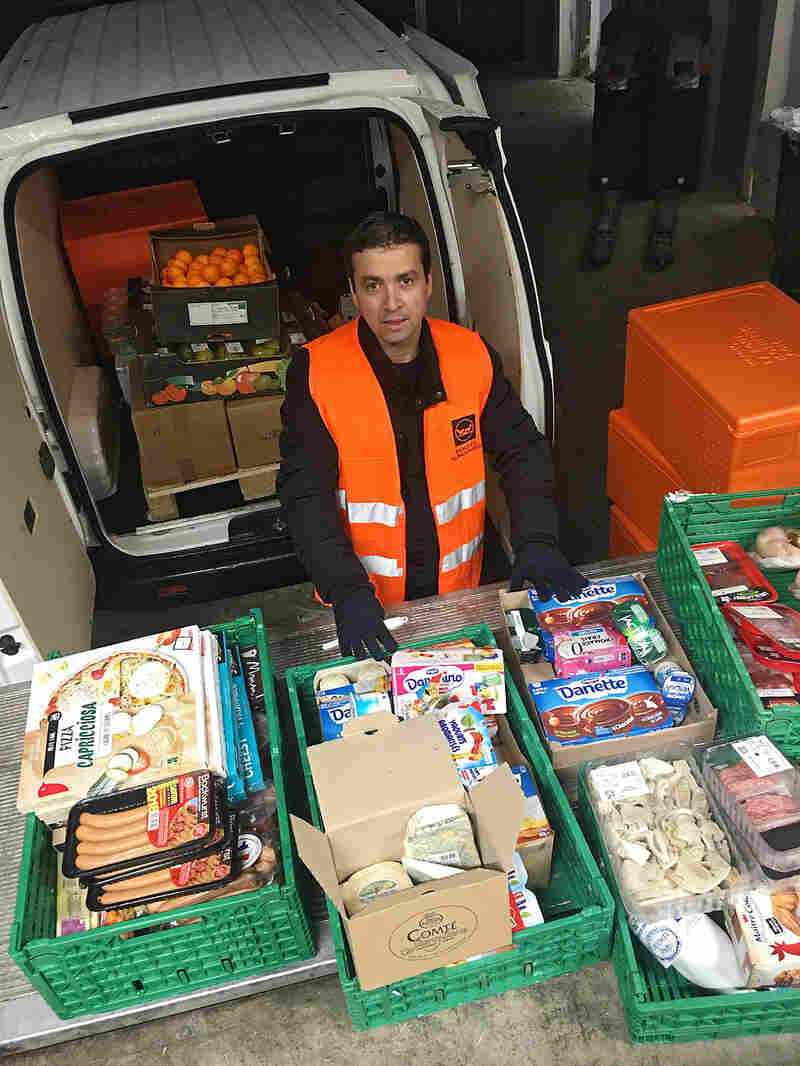 Djerbrani checks food donations from a French grocery store before driving it across town to a church, which will distribute it to poor families. Eleanor Beardsley/NPR hide caption 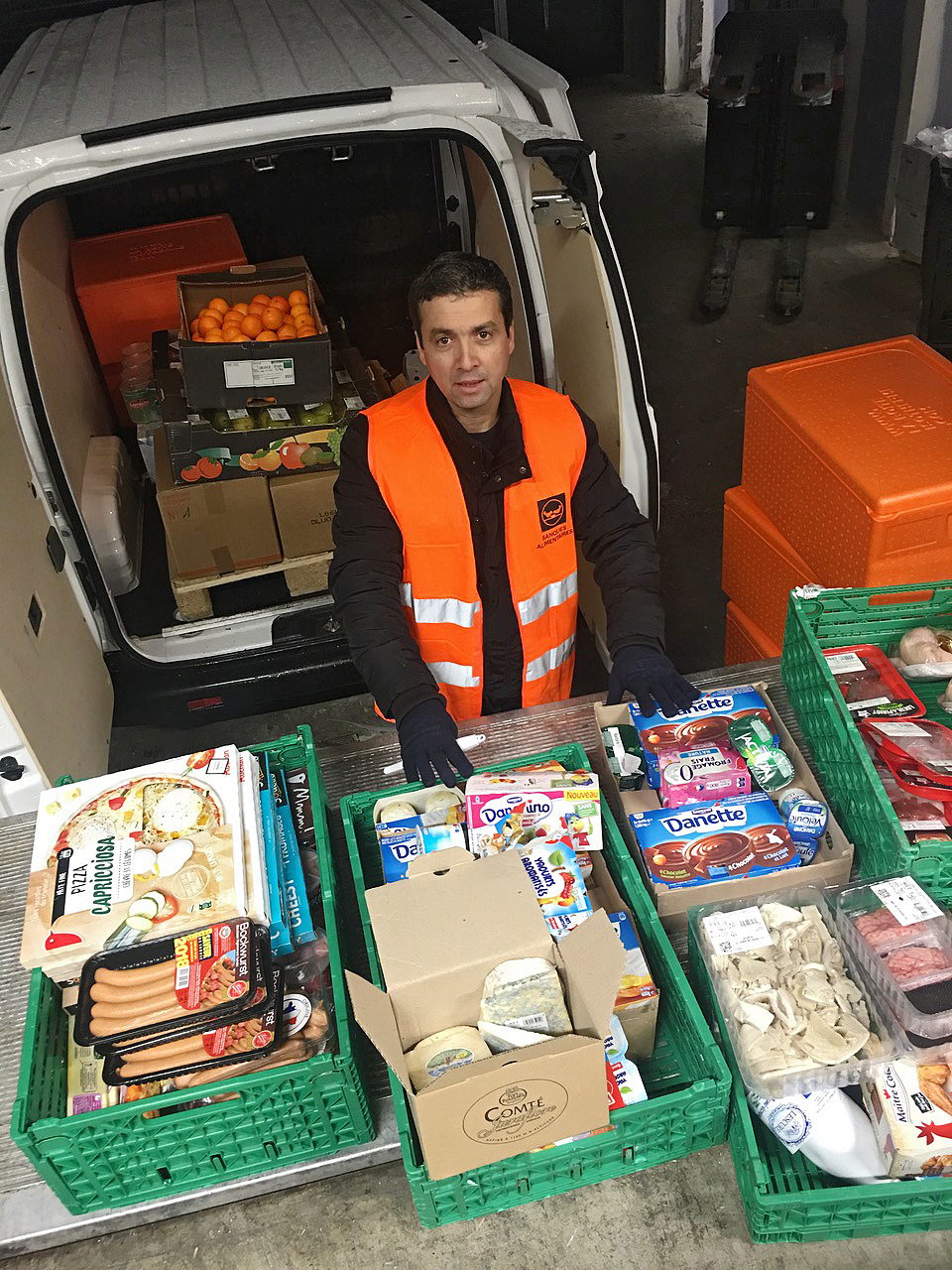 Djerbrani checks food donations from a French grocery store before driving it across town to a church, which will distribute it to poor families.

Food waste is a global problem. In developing countries, food spoils at the production stage. Well-off nations throw it away at the consumption stage. Grocery stores are responsible for a lot of that waste. France is trying to change that with its 2-year-old law.

Out back on the store's loading dock, Djerbrani plunges a thermometer into a yogurt. "I take the temperature of dairy products to make sure they've been kept refrigerated," he says.

Djerbrani loads the food into his van and drives it across town to a church, which will distribute it to poor families.

Gillaine Demeules is a volunteer with the St. Vincent de Paul charity. She's getting ready for the weekly food handout.

"Tomorrow, we'll give people soup, sardines, pasta and whatever fresh items they deliver us today," she says. "We never know what they're gonna bring."

Across France, 5,000 charities depend on the food bank network, which now gets nearly half of its donations from grocery stores, according to Jacques Bailet, head of the French network of food banks known as Banques Alimentaires. The new law has increased the quantity and quality of donations. There are more fresh foods and products available further from their expiration date.

He says the law also helps cut back on food waste by getting rid of certain constraining contracts between supermarkets and food manufacturers.

"There was one food manufacturer that was not authorized to donate the sandwiches it made for a particular supermarket brand. But now, we get 30,000 sandwiches a month from them — sandwiches that used to be thrown away," Bailet says.

While the world wastes about one-third of the food it produces, and France wastes as much as 66 pounds per person per year, Americans waste some 200 billion pounds of food a year. That is enough to fill up the 90,000-seat Rose Bowl stadium every day, says Jonathan Bloom, the author of American Wasteland, about food waste in the United States. He says there are different ways of cutting back on food waste. For example, you can start from the end of the chain by banning food in landfills.

Bloom says the French law is great, and he would love to see such a policy shift in Washington. But it strikes him as difficult, politically, especially in today's climate. He knows Americans will be less excited about the government telling businesses what to do.

"The French version is quite socialist, but I would say in a great way because you're providing a way where they [supermarkets] have to do the beneficial things not only for the environment, but from an ethical standpoint of getting healthy food to those who need it and minimizing some of the harmful greenhouse gas emissions that come when food ends up in a landfill," he says.

The French law seem to have encouraged the development of a whole ecosystem of businesses that are helping grocery stores better manage their stocks and reduce food waste, although a formal review is still in the works.

Parliamentarian Guillaume Garot wrote the law. He believes the fight against food waste should be as important as other national causes, like wearing seatbelts. Garot says he has been contacted by people from all over the world who want to do the same thing.

"It's changed the supermarkets' practices," he says. "They're more attentive to their environment, and they give more."

But most important, says Garot, is that a supermarket is now seen as more than just a profit center. It's a place where there has to be humanity.