Accessibility links
Olympians Are Using Nonalcoholic Beer As Recovery Drinks. Here's The Science : The Salt Today's Olympians have been swept up in a new trend largely emerging from Bavaria: nonalcoholic athletic recovery beers. Do they really work? We look at the evidence. 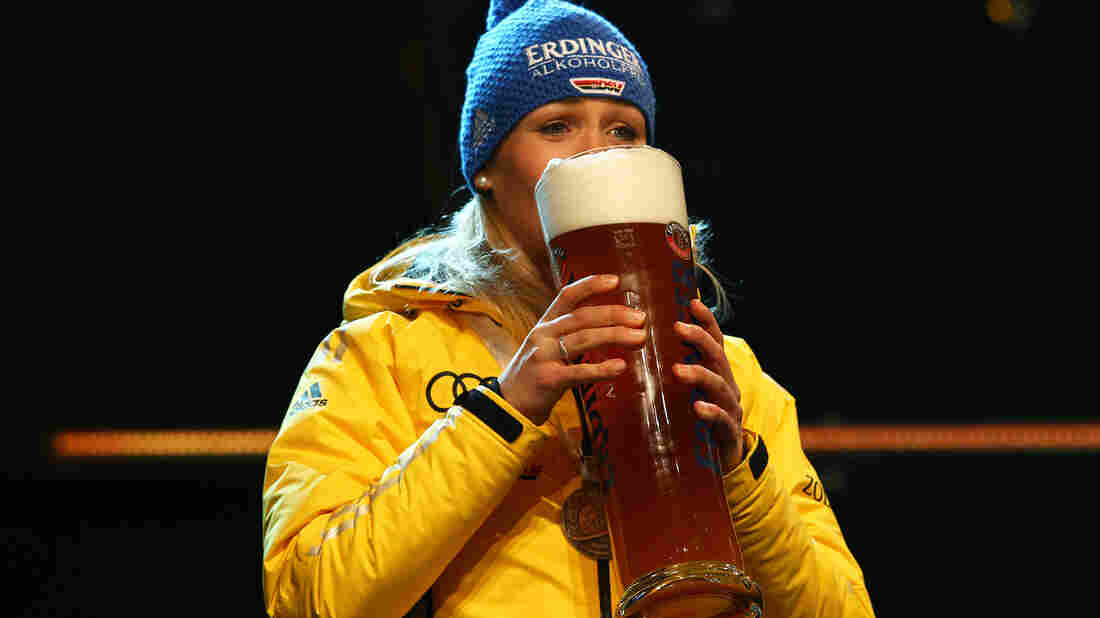 Magdalena Neuner of Germany enjoys a glass of Erdinger nonalcoholic beer after a medal ceremony at the biathlon world championships in Ruhpolding, Germany, in 2012. Today's Olympians have been swept up in a new trend largely emerging from Bavaria: nonalcoholic athletic recovery beers. Alexander Hassenstein/Bongarts/Getty Images hide caption 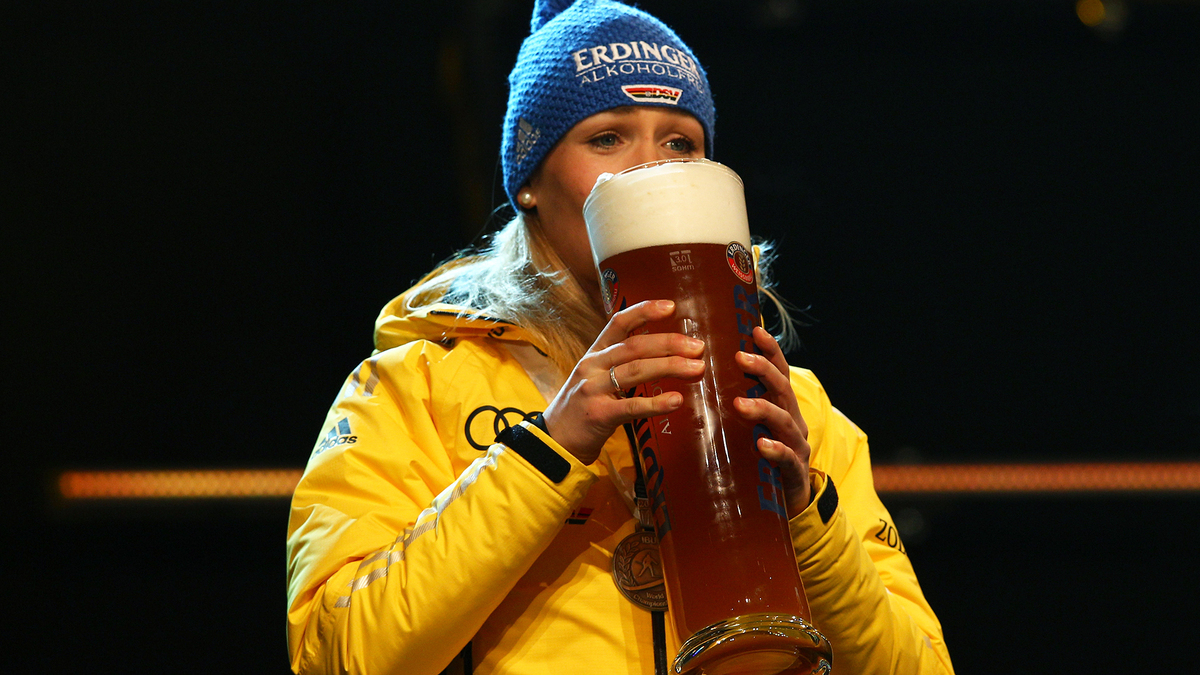 Magdalena Neuner of Germany enjoys a glass of Erdinger nonalcoholic beer after a medal ceremony at the biathlon world championships in Ruhpolding, Germany, in 2012. Today's Olympians have been swept up in a new trend largely emerging from Bavaria: nonalcoholic athletic recovery beers.

In Greek mythology, the Olympians were said to drink ambrosia, which bestowed upon them immortality. Occasionally, athletic heroes like Heracles were also gifted a sip. But the myths don't say much about the golden-amber liquid getting them all drunk.

Today's Olympians have been swept up in a new trend largely emerging from Bavaria: nonalcoholic athletic recovery beers. Over the past few years, a number of breweries, such as Erdinger and Krombacher, have expanded their offerings of sober sports beers. This year, beers from both brands are a common sight in the Olympic Village.

But how much science is there to support the use of beer as an athletic recovery drink?

Beer's most oft-cited health benefits revolve around plant-derived compounds called phenols. These organic compounds often have defining tastes. The spice of peppers? That is the phenol Capsaicin. The pungent heft of oregano or the smoke in scotch? Carvacrol in the leaves and guaiacol from charred barrels.

Appalachian State University's David Nieman has studied phenols' health effects. On the whole, phenol-rich diets tend to lower inflammation and reduce the risk of sickness, he says. "[Polyphenols] have a very unique molecular structure that can actually regulate the genes that control inflammation," in addition to general antiviral properties, says Nieman.

In 2011, Nieman and the University of Munich's Johannes Scherr investigated the effects of beer, which contains around 50 phenols, on athletes — whose intense physical activity can compromise their immune activity. When marathon runners were instructed to drink 1.5 liters of nonalcoholic beer a day, their risk of upper respiratory infection was reduced. The activity of white blood cells, a good indicator of inflammation, was lowered 20 percent.

However, phenols aren't the only health benefits beer has to offer — and not just any brew can be called a sports beer. For example, regular alcoholic beer is a diuretic, and having to urinate more dehydrates athletes, says biologist Mauricio Sepulveda of Chile's Pontifical Catholic University. It also can disrupt crucial protein synthesis, says Ben Desbrow with Griffith University in South East Queensland, Australia.

What is more, beer is a uniquely social drink, notes Desbrow — a dietitian who has long studied the health effects of the brew and even engineered a version less likely to give tipplers a hangover. "In Australia, and I'm sure it's the same in many places around the world, we've got a lot of people who, after exercise or exertion or maybe a hard day's work, they like to drink beer," he says.

That comes with a hydration dilemma. If athletes drink beer, they won't get properly hydrated. That is because water, when drunk in large quantities, is quickly expelled without electrolytes. According to Desbrow, our bodies can easily hold water and properly rehydrate when we take in calories as we drink — but athletes can't eat before every new match, round, bout or run. One of the benefits of sugary recovery drinks is that they restore athletes' stores of glycogen — a sugar-based compound our bodies use to readily store energy. If an athlete needs something to drink between rounds of boxing, or innings of a baseball game, they're going to want the sugar in most sports drinks.

But when the day is wrapping up, athletes don't need to worry about replacing glycogen stores in a hurry. So a nonalcoholic beer and some water can help them recover — while also offering an opportunity to socialize with other athletes.

In 2013, Desbrow found that having athletes drink a reduced-alcohol beer with added electrolytes allowed them to retain more fluids. His original study had only seven participants. But since then, he and other researchers (including Sepulveda) have done several follow-up studies that have generally confirmed that light or nonalcoholic beer works well enough for hydration.

Desbrow's specially formulated, electrolyte-rich beer wasn't significantly more hydrating than regular light beer. Yet, several breweries are touting the added electrolytes in their sports beers. The added marketing appeal might make it worthwhile, but modifying the salt content of beer — without majorly disrupting the flavor — can involve some complicated and costly experimentation.

And removing alcohol from beer is already pretty complex. One of the most popular methods is to take advantage of the fact that alcohol's boiling temp is lower than water's by nearly 4 degrees Celsius. By applying heat and creating a vacuum (which further reduces the boiling temperature), brewers cook off the alcohol — but not without also altering the flavor profile of other compounds.

Other brewers use reverse osmosis to remove alcohol: They filter out most everything but the water and alcohol, leaving a syrupy concentrate. After distilling out the alcohol, they remix the concentrate and remaining water. Either way, the beer has to be recarbonated, either through adding yeast to the bottle or injecting carbon dioxide (which technically makes it a soda).

Other new methods of brewing nonalcoholic beer are popping up. Bravus has a sober IPA — long thought impossible because hop flavors are quickly disrupted by alcohol-boiling heat — by using what it will only call "biological wizardry." There is also a growing array of wild yeasts and genetically modified brewers yeasts, which can produce low-alcohol beers.

Ultimately, sports drinks are pretty darn good for replenishing electrolytes and spent sugar stores. But at the end of the day (literally), low-alcohol beers can provide a recovery beverage with two benefits relatively unmatched by other options: first, a host of extra healthy plant-derived compounds. Second, as Desbrow points out, people drink beer together over all the world (and have for much of the history of human civilization), so what could honor that spirit more than shared brews in a multinational village of Olympians?