Accessibility links
How Might Trump's Food Box Plan Affect Health? Native Americans Know All Too Well : The Salt For some, the USDA's plan to deliver SNAP benefits as canned, shelf-stable food is painfully familiar. The agency has long given this type of aid to tribes, with devastating health effects. 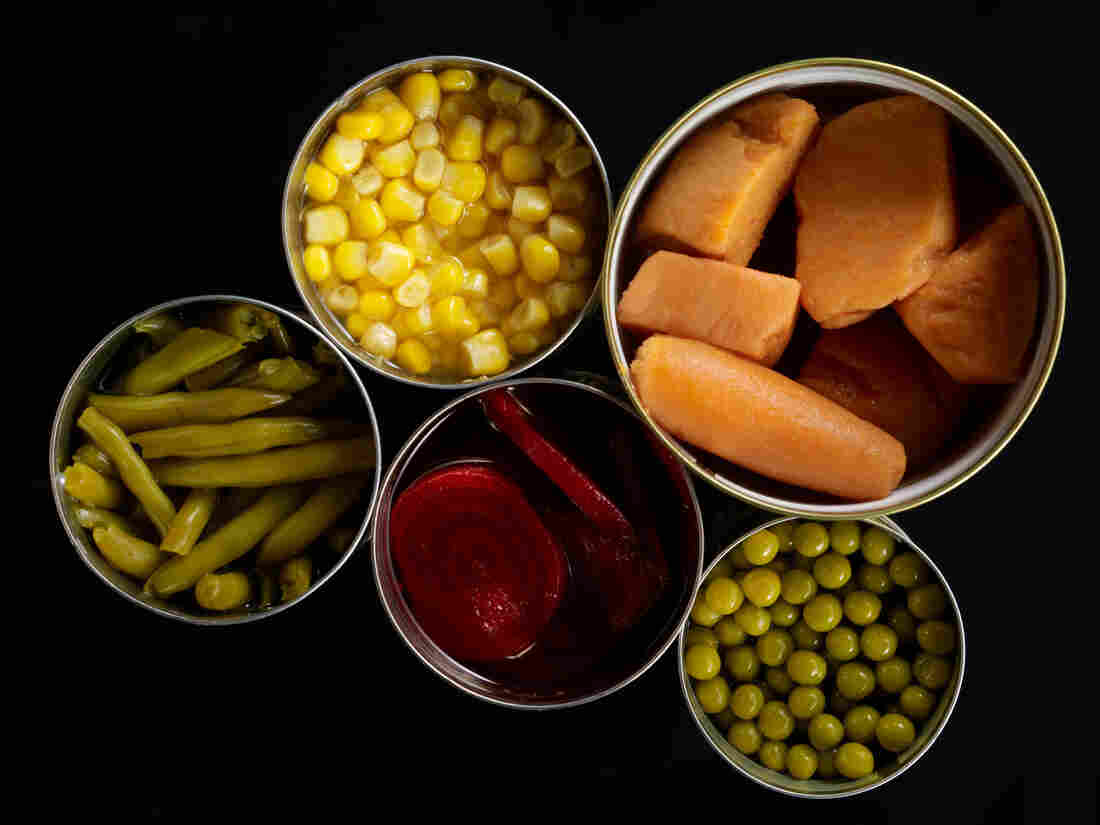 The USDA has been providing food aid in the form of canned, shelf-stable nonperishables to Native Americans for decades. Shana Novak/Getty Images hide caption 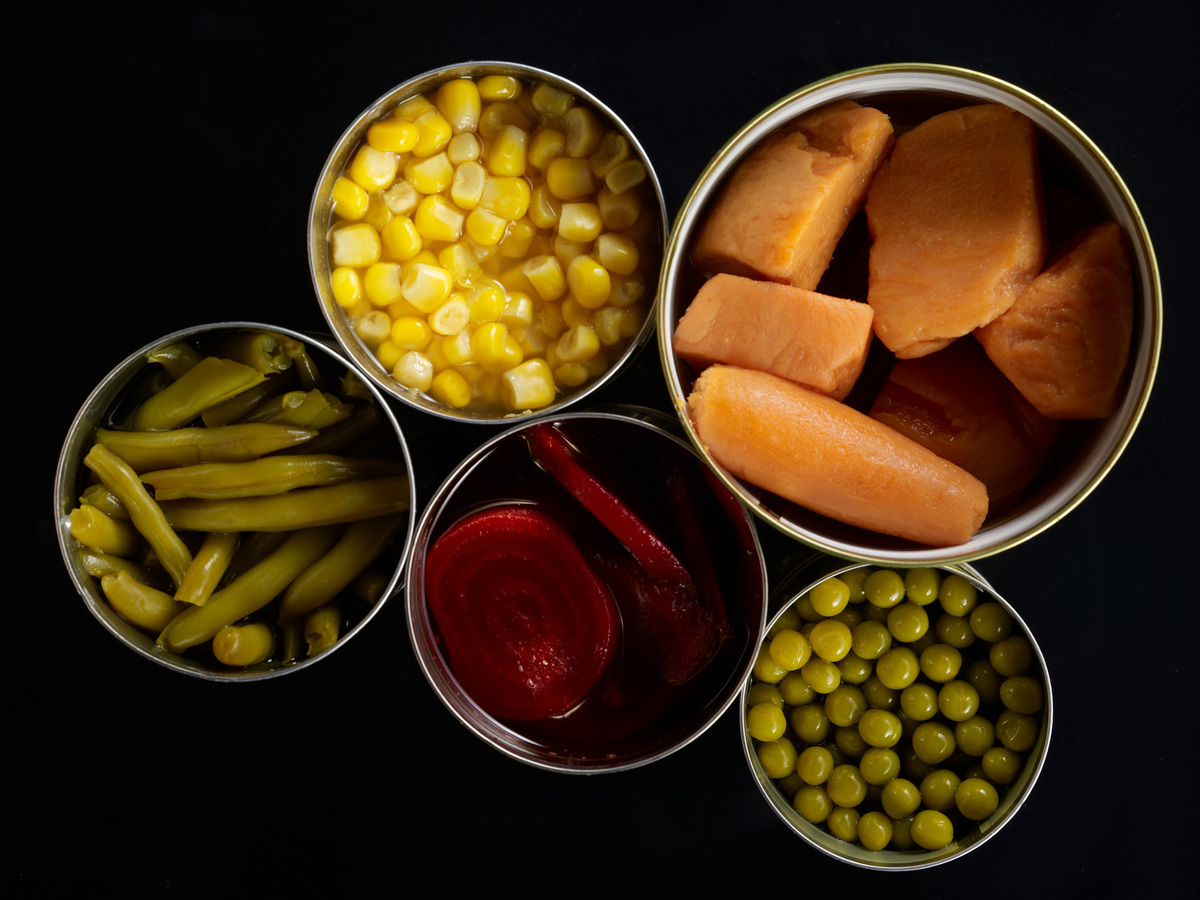 The USDA has been providing food aid in the form of canned, shelf-stable nonperishables to Native Americans for decades.

The Trump administration unleashed a flood of outrage earlier this month after unveiling a proposal to overhaul the Supplemental Nutrition Assistance Program, formerly called food stamps. The plan would replace half the benefits people receive with boxed, nonperishable — i.e. not fresh — foods chosen by the government and not by the people eating them.

Among those horrified at the thought: American Indians who recognized this as the same type of federal food assistance that tribes have historically received, with devastating implications for health.

Since 1977, the U.S. Department of Agriculture has bought nonperishable foods to distribute on Indian reservations and nearby rural areas as part of the Food Distribution Program on Indian Reservations. The program was designed as an alternative to SNAP for low-income Native Americans living in remote areas without easy access to grocery stores. The food boxes delivered were filled with canned, shelf-stable foods like peanut butter, meats and vegetables, powdered eggs and milk.

"If you talk to people like me who grew up solely on this stuff, you hear stories of 'I never even tasted a pineapple or real spinach' — you didn't taste these foods until you were older," says Valarie Blue Bird Jernigan, a citizen of the Choctaw Nation in Oklahoma.

"We would scrape together whatever commodities we had available to us," Jernigan recalls.

Both of her parents worked full time, but "it just wasn't enough to support a family," she says. They relied on government provisions for meals. Breakfast was often a grain like farina served with powdered milk with water. "A lot of times we had mashed potato flakes — you add water, too — and maybe canned peaches, and if you had any vegetables, it was canned. And that was pretty much it."

The effects of this kind of government commodities-based diet can be seen all around Indian country, says Jernigan, now a University of Oklahoma researcher who studies the impacts of food environments on Native American health. "There's even a name for it — it's called 'commod bod.' That's what we call it because it makes you look a certain way when you eat these foods."

The name, she says, is a joke, but the health implications of this kind of diet are anything but funny. American Indians and Alaska Natives are at least twice as likely as whites to have Type 2 diabetes, and they have 1 1/2 times the rate of obesity as non-Hispanic whites, according to the government statistics.

Scientists think one explanation for these health differences may lie in what is called the "thrifty gene" theory, which suggests Native Americans have a genetic predisposition to obesity and diabetes. But these diseases didn't become prevalent until tribes adopted a more processed Western diet, notes Elizabeth Hoover, who is of Mohawk and Mi'kmaq ancestry and teaches about indigenous food movements at Brown University.

"A good part of this is not because indigenous bodies are somehow inherently susceptible to diabetes. It's because of these really insufficient diets that are not nutrient-dense, but they're very calorie-dense," says Hoover, who is writing a book about Native American efforts to reclaim their traditional food culture.

Like SNAP, the Indian food distribution program is meant to supplement a family's food budget. But Jernigan says recent studies have found that 60 percent of Native Americans who receive food assistance through the program rely on the government program as their primary source of food. (By comparison, 37 percent of people enrolled in SNAP rely on it as their main source of money for food, according to a new report from the Urban Institute.) So the quality of that food can really affect health.

"If you want to know what eating primarily shelf-stable and packaged foods does to a household or family or community, I think you could look closely at the Native American experience," she says.

While the program began in the 1970s, the federal government had been providing American Indians with government commodities for far longer. In the late 1940s, the U.S. government began distributing to tribes surplus foods that it was buying up as a way to support prices for struggling farmers.

Before the 1950s, Jernigan says, "there were few accounts of these lifestyle diseases [like Type 2 diabetes] — they couldn't really be found in Native American communities. The major problem was malnutrition." By the 1960s, researchers were seeing higher rates of Type 2 diabetes among this population.

After the program began in the 1970s, Jernigan says, "you started to see high consumption of these packaged and shelf-stable canned foods — nothing fresh, no fresh vegetables, foods high in sodium, fat and sugar. And you see the rates of these preventable diseases skyrocket."

Those government-provided food boxes also contained something else: stigma, says Joe Van Alstine, a citizen of the Little Traverse Bay Bands of Odawa Indians in Michigan.

"I grew up on it, a bunch of my friends did. It was always the stigma of the can ... you opened it up, and it was gross and nasty-looking," Van Alstine says.

For many in Indian country, says Hoover, the Trump administration's "Harvest Box" proposal brought back childhood memories of foods at which they now "shudder when they look back on and started to avoid when they could afford groceries."

Hoover says the nutritional quality of the food aid to tribes has improved a lot over the years. Research by the USDA's Food and Nutrition Service has found high rates of participant satisfaction with the program. Hoover credits the efforts of people like Van Alstine. He is the food distribution program director for his tribe and oversees the reservation food distribution program in the Midwest. He is also the vice president of the National Association of Food Distribution Programs on Indian Reservations, which is made up of tribal representatives who administer federal food aid at the local level.

Over the years, he says, they've pushed for changes to the program — like the inclusion of more culturally relevant, and healthful, foods like hand-harvested wild rice, grass-fed bison, wild-caught Pacific salmon and blue cornmeal. Another welcome innovation: a grocery-store like model where aid recipients can shop the aisles and select their own foods, including fresh fruits and vegetables and frozen (not just canned) meats. The stores are roughly the size of a 7-Eleven, and about a third of the 103 tribal organizations now have them, Van Alstine says.

"So when they come in here they do have a choice," says Van Alstine. "Because I do feel that's what makes them happy."