Accessibility links
A Hip Charleston Restaurant Where Women Are The Boss : The Salt The #MeToo movement has forced many restaurants and chefs to confront sexual harassment in their own ranks. At Cannon Green, where women mentor other women, the atmosphere seems much less turbulent.

A Hip Charleston Restaurant Where Women Are The Boss

A Hip Charleston Restaurant Where Women Are The Boss 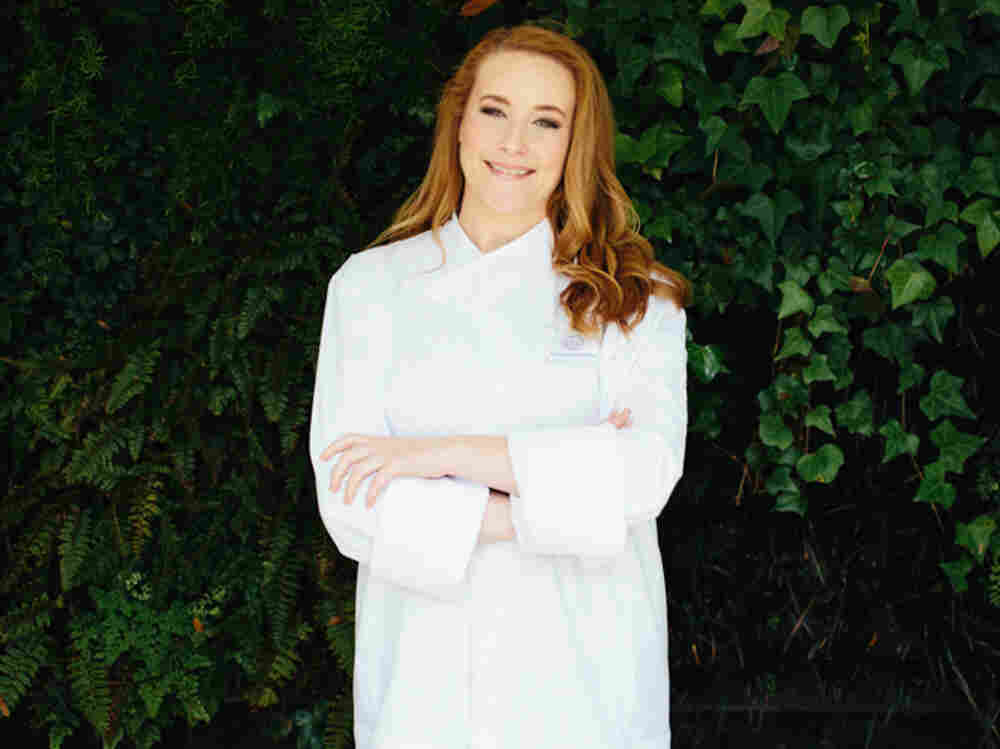 Amalia Scatena is the executive chef at Cannon Green, a Charleston, S.C., establishment where 80 percent of the staffers are women. Scatena says her management style is simple: "Build people up, don't tear them down." Nickie Stone hide caption 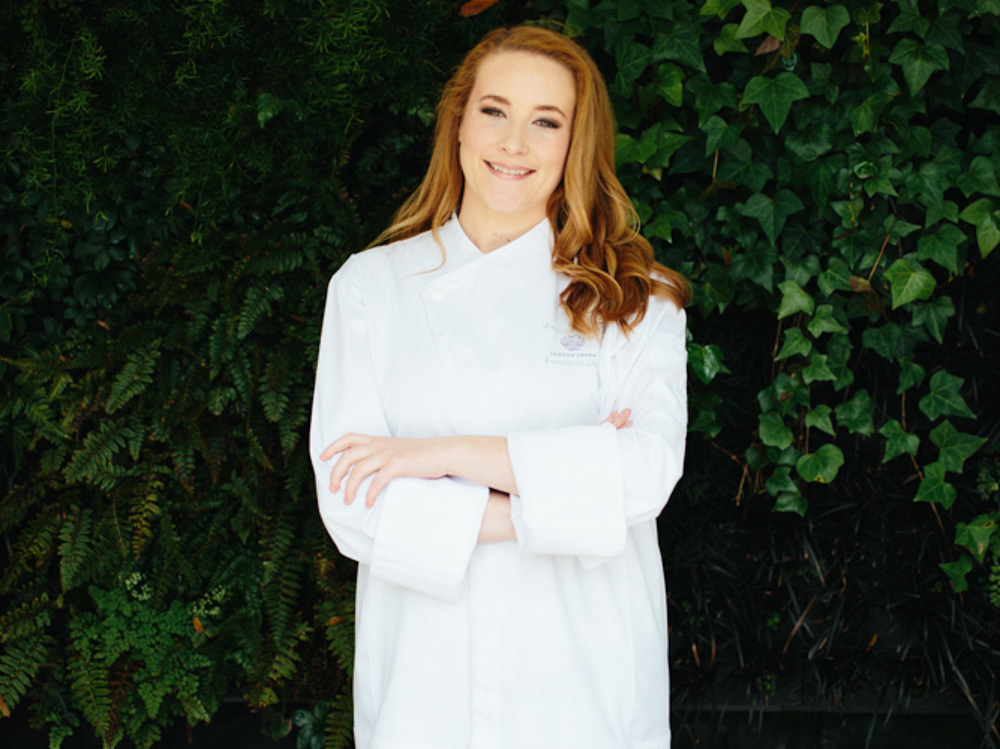 Amalia Scatena is the executive chef at Cannon Green, a Charleston, S.C., establishment where 80 percent of the staffers are women. Scatena says her management style is simple: "Build people up, don't tear them down."

In the heart of Charleston, S.C., on a melting pot street of shops, eateries and residents from all walks of life, stands Cannon Green, a soaring, skylight-lit Mediterranean restaurant and wedding venue. The staff of 70 runs two kitchens, which would not be unusual, except for the fact that it is 80 percent female.

The front of the house is half women. The administrative, sales and events team is all female. And there are 12 women and two men in management positions. The kitchens are largely composed of women, with one male line cook and all-male dishwashers.

"The very last question chef asked me before she hired me," recalls sous chef Beverly Harrell, "was: 'Do you have ability to take direction from females?'"

It's a bustling place: The restaurant seats 200, while the associated wedding space seats 250. Talk to women who work there, and you will be regaled with enthusiastic, even devout, praise for the place: "I love what I do and I hope our team stays together forever," gushes restaurant manager Hillary Curry. 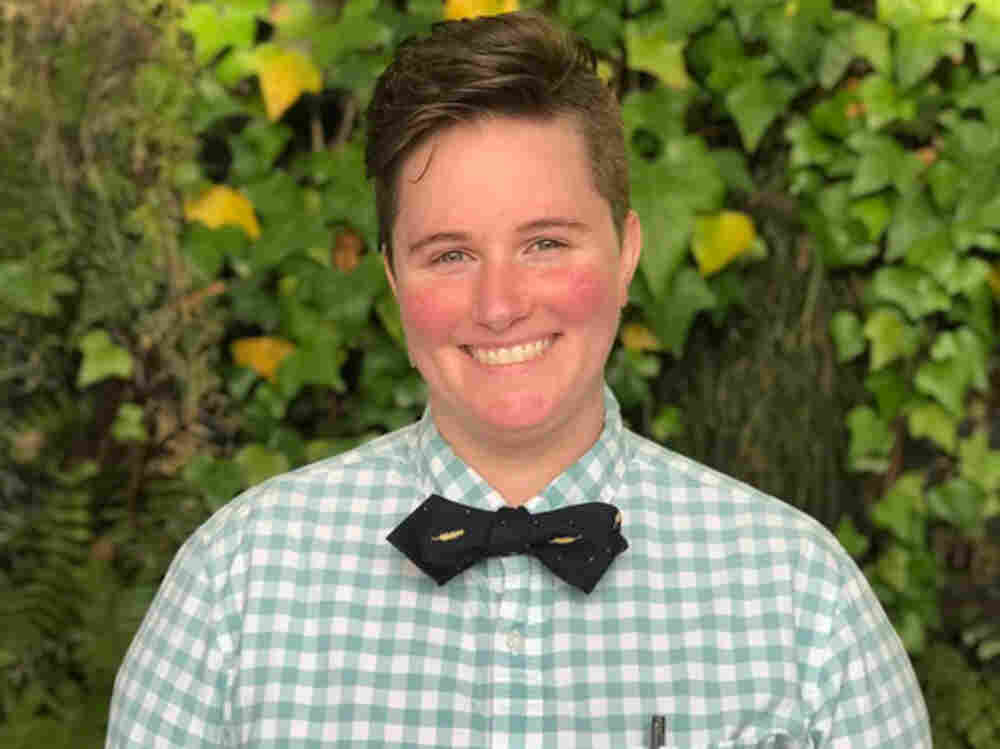 Cannon Green restaurant manager Hillary Curry says when she first started working there, a male employee made a cutting comment about her appearance. "Chef sat him down," Curry recalls, "and told him he could not joke about someone's appearance, and it has never happened again." Cannon Green hide caption

But a few years ago, when Curry first began as a bartender there, she nearly quit. "I was mixing drinks," she recalls, "when a male employee came up to me and said, in front of others, 'I don't like your face. It makes me want to punch you.' Then he laughed."

That kind of cutting jibe isn't uncommon in the restaurant world, which is generally acknowledged to be both rewarding and — as Toronto restaurateur Jen Agg recently observed in The New Yorker — aggressive, bullying and brutal at times. Curry remembers thinking, "I can't work here" — even though bartending at the farm-to-table eatery was "pure, creative joy," a place where she could wander into the walk-in fridge and pluck fresh herbs and local produce to invent novel, flavorful cocktails.

Instead of quitting, she pulled aside Cannon Green's executive chef, 35-year-old Amalia Scatena. "Chef sat him down," Curry recalls, "and told him he could not joke about someone's appearance, and it has never happened again. She did it so firmly but gracefully — he and I have since become good colleagues and friends."

In this tumultuous time of #metoo, many restaurants are trying to make amends after sexual harassment scandals have erupted. As New York Times food correspondent Kim Severson recently noted in a deep-dive report, world-famous establishments and their chefs, hit by charges of predatory or abusive behavior, are now struggling to "change the DNA" of their companies, rout out other percolating cases of harassment, and set up new and clear employee protections. It's a remarkable development, and yet most agree the path ahead is uncertain and long.

But at Cannon Green, where women mentor other women, the atmosphere seems much less turbulent. Scatena says the baton was passed to her by another female 15 years ago, when she worked in the kitchen of James Beard nominee Melissa Green. She has never forgotten the moment when Green told her, "You were meant for this business." It continued when, in 2011, Lynn Easton, one of the country's most successful wedding planners, hired Scatena to be executive chef at a new restaurant and event venue near Charlottesville, Va., called Pippin Hill Farm & Vineyards. 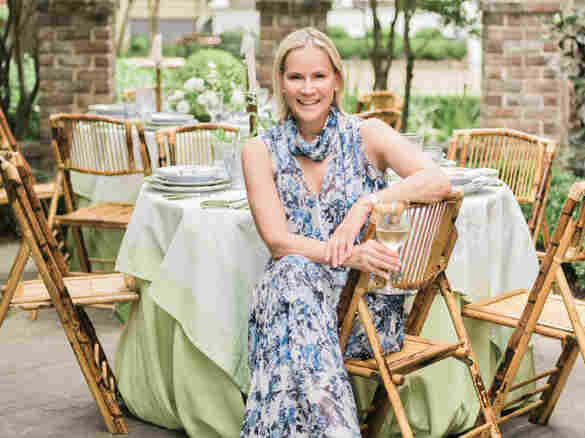 Lynn Easton and her husband, Dean Porter Andrews, own the Easton-Porter group, an array of high-end boutique hotels, restaurants and event venues, including Cannon Green. The company has a zero tolerance policy on harassment. Corbin Gurkin hide caption 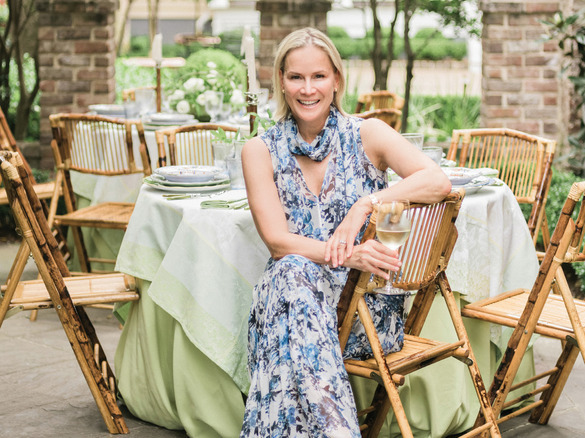 Lynn Easton and her husband, Dean Porter Andrews, own the Easton-Porter group, an array of high-end boutique hotels, restaurants and event venues, including Cannon Green. The company has a zero tolerance policy on harassment.

Easton and her husband, Dean Porter Andrews, own Easton-Porter group, an array of high-end boutique hotels, restaurants and event venues. "I truly believe in making young women who work with me just as powerful as they can possibly be," says Easton. "It's a bit of a mission for me." Scatena struck her as "calm, tough, and kind. She was my first major hire."

Even before the restaurant opened, Easton felt she was proven right. "We were having a tasting for our first wedding event there," she recalls, "and the kitchen wasn't ready, so I told Amalia we would use the kitchen in my house." Easton recalls sitting outside on the porch with the client, and feeling annoyed that the pace of the tasting was slowing down. "Amalia was talking to the client, and dishes were coming out too slowly. I asked her to pick up the pace." Scatena explained that Easton's oven had gone into its cleaning cycle and was locked, and so she had been conducting the tasting out of the toaster oven. "That is calmness under fire. She delivered an off-the-chart tasting out of my toaster oven."

In 2014, when Easton-Porter opened Cannon Green, they brought Scatena in as executive chef and soon promoted her to culinary director of the entire hospitality company. 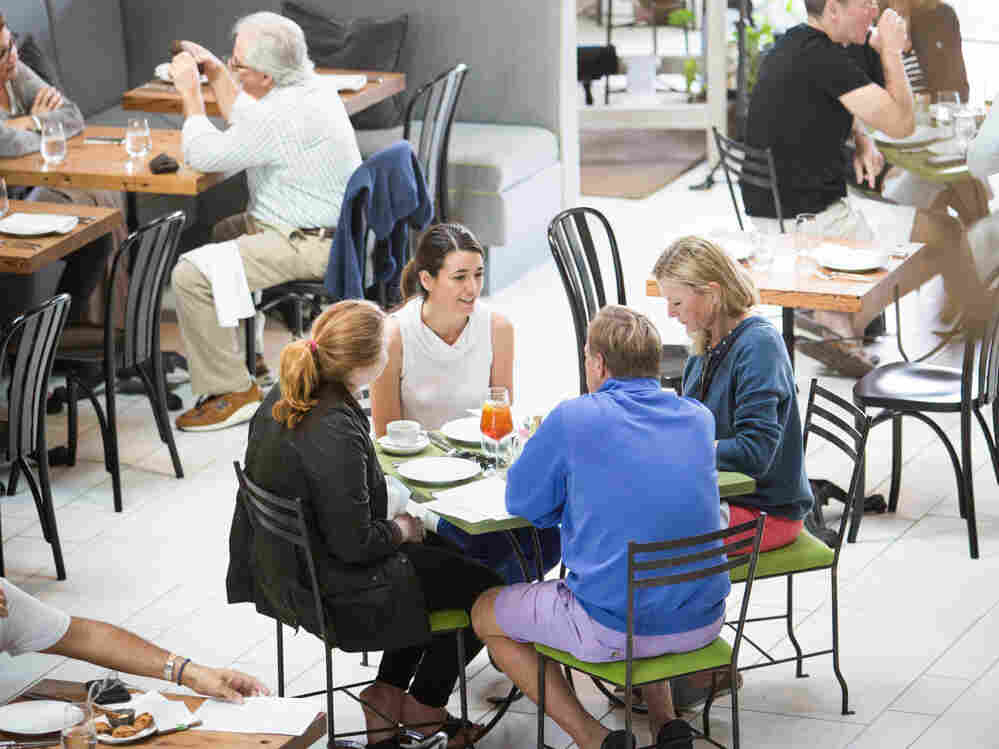 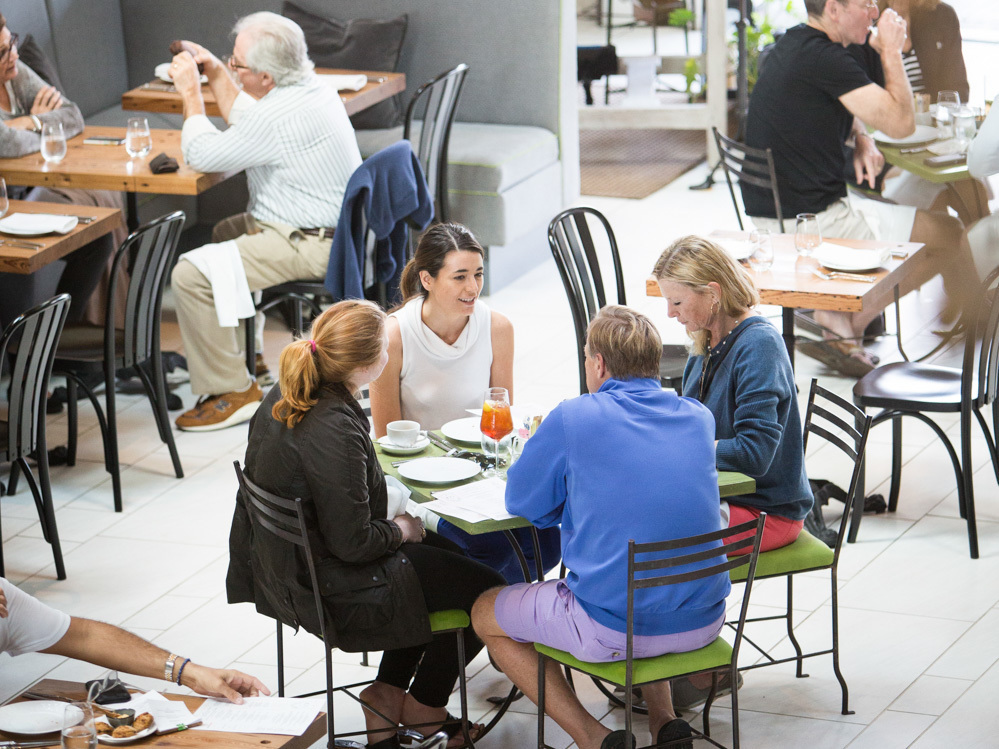 Easton-Porter has established a zero tolerance policy for harassment — verbal or physical — in all of its establishments. Scatena embraces it and says that she proactively looks out for employees who might be afraid to speak up for themselves: "If I feel the situation needs a big impact, I'll say what I have to say in front of everyone."

Early in her career, when she was executive chef at Pippin Hill, a line cook put his arms around a female employee, lifting her off the ground and spinning her around in the kitchen. "I saw the look of embarrassment and discomfort on her face," Scatena says. "And I told him in front of everybody, 'Put her down. She did not ask you to pick her up.' " From the start, says Scatena, she put an early stop to inappropriate behavior. Today, at Cannon Green, if neither private nor public reproach changes inappropriate behavior, the employee is fired.

Her management style, she says, is simple: "Build people up, don't tear them down. Instead of yelling in a cook's face and having them crumble in the moment, when I actually need them to be their best, I'll help them out and then communicate to them at the end of the shift what went wrong and what has to change."

Sous chef Cheyenne Bond has personally experienced that difference. On a bad night as a line chef at a previous venue, "my male manager yanked me off the line and yelled, 'You need to get the f--- out of here.'" On a busy night at Cannon Green, Scatena will coach Bond if her station is running behind. "She'll stand behind me, tell me how many of one item I have on the board where my order tickets are, or which item I need to start cooking now. That positive reinforcement and structure gets me right back on track."

Finally, Scatena delegates. "When I was a sous chef, I just cooked food, that was it," she says. "Here, I meet with my three sous chefs every morning to talk about all the employees, as well as what happened the night before." If there is a problem — such as two employees not communicating well during service so that dishes arrive out of order --Scatena might ask a sous chef to handle it. "I let them learn how to manage, and if that doesn't work, then I step in."

Once you set the tone for a workplace, says Scatena, it seems to be absorbed by osmosis. "Two of my male dishwashers said the other day that they wouldn't even think about acting unruly because of the example I set. That's so great. I don't even have to have a conversation."

It almost sounds easy. It almost sounds straightforward and natural. If a restaurant can run this smoothly, why is entrenched brutality or aggression the norm in too many places? Why, as detailed by Simon Wroe in the Telegraph in 2014, are kitchens often seen as "crucibles of pain" where "abuse is commonplace. The hours are ungodly. Not all the blood comes from the meat."

One could come up with a litany of answers — from testosterone-fueled excesses to "bro-culture" patriarchal rituals to a military in-the-trenches mentality adopted in European kitchens and since embraced everywhere.

Does part of the answer lie in culturally reinforced differences between the sexes?

"I feel like working with females in general is more fun," says Scatena. "We're not competing with each other and comparing the size of our knives."

Paul Fehribach, chef and co-owner of Big Jones in Chicago, and author of The Big Jones Cookbook, might agree. In a recent Facebook post he wrote: "What is critically needed are the voices of women, and we white male chefs actually should STFU and listen for once, and for a good long while. The dismantling of kitchen "bro" culture is so imperative, I'm elated this moment is here and ready to see it through."

Scatena sums it up this way: "There are male chefs out there that are wonderful leaders. But in general, women are less likely to be driven by ego, which makes them a healthier boss and mentor. That's what you get with a woman."