Accessibility links
Widespread Drought Across U.S. Stokes Fears About A Repeat Of 2012's Wrath : The Salt If rainfall doesn't come soon, it could cost billions in devastation — a difficult fallout considering the USDA expects farmers' incomes to hit a 12-year low even if crop yields stay high. 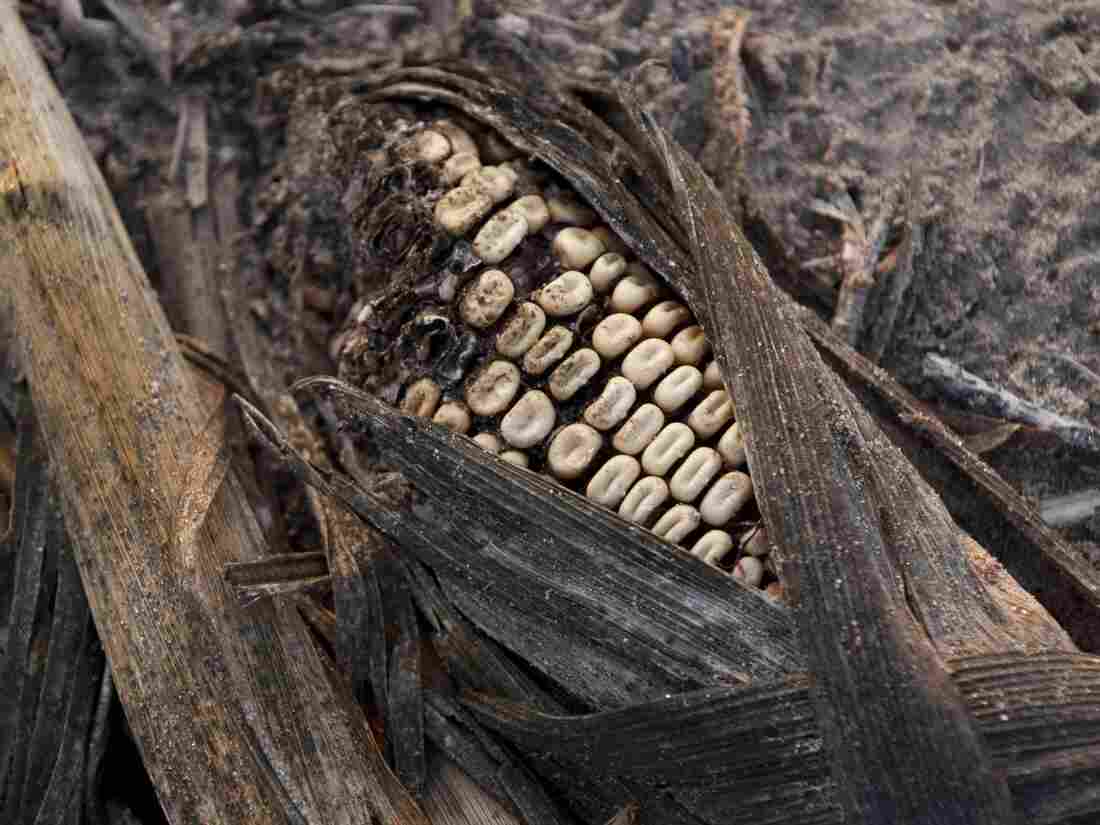 In 2012, record heat throughout the U.S. farm belt curtailed crop production like this rotting corn on a farm in Bruceville, Ind. Farmers are now worried that the lack of rainfall this year could start the cycle over again. Saul Loeb/AFP/Getty Images hide caption 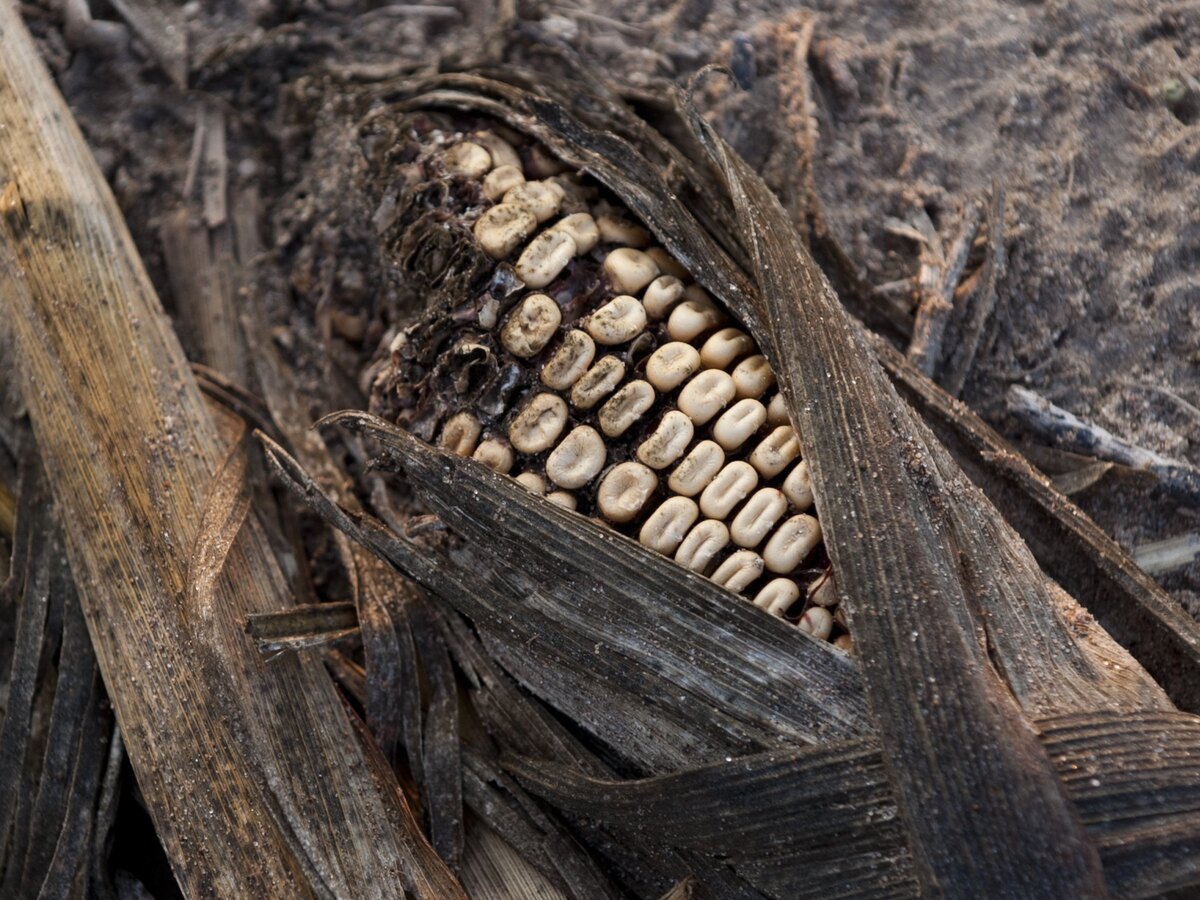 In 2012, record heat throughout the U.S. farm belt curtailed crop production like this rotting corn on a farm in Bruceville, Ind. Farmers are now worried that the lack of rainfall this year could start the cycle over again.

Western Illinois might be close to the Mississippi and Illinois rivers, but it's the driest part of the state this year.

"We really haven't really had any measurable rain since the middle of October," says Ken Schafer, who farms winter wheat, corn and soybeans in Jerseyville. "I dug some post-holes this winter, and it's just dust."

His farm is in an area that the U.S. Drought Monitor considers "severe." Some of the nation's worst areas of drought are in southwest Kansas, much of Oklahoma and a slice of Missouri. But several states are in some sort of drought, from Illinois to California, the Dakotas to Texas.

The worry also is widespread, considering the reach of this winter's drought is even worse than in 2012, a year that brought the worst drought in the U.S. since the Dust Bowl in the 1930s and cost farmers, ranchers and governments an estimated $30 billion, according to the federal National Centers for Environmental Information.

If things don't get better, it'll show in producers' pocketbooks and on the taxpayers' dime — a difficult thing to swallow considering the U.S. Department of Agriculture expects farmers' incomes to be at a 12-year low even if crop yields stay high.

However, it's only February, which is one of the driest months on the calendar. And, outside of some winter wheat, the lack of moisture won't impact many crops. There's still time for spring rains to rehydrate the region.

"If this was July, we'd be hitting the panic button," according to Illinois State Climatologist Jim Angel. "But in the wintertime, it's always kind of a little odd because droughts develop slowly and you know there's not much going on out there."

A few larger rainfalls could bring areas back to normal by the time planting season comes around. That's what happened in 2013, when the 2012 drought lingered into the new year, causing conditions even drier than now.

"We had torrential rains in April of that year," Angel says. "We had some places in Illinois that had 8 to 12 to 16 inches. I mean, it was like Biblical amounts of rainfall in one month."

Climate change is bringing these massive, wet storms to the Midwest more often, Angel says, especially in the past four or five years. Because of that, he says that even if there is a drought this year, it likely won't stay in the Midwest for long.

The West is another story: "California, Arizona, New Mexico, that area is getting drier over time," he says. "And that's some of the expectation of how it will move in the future; that we'll continue to get wetter and they'll continue to get drier."

In the southeast corner of Colorado, Gary Melcher says winter drought has affected at least 10 years out of the past 13. The region got rain throughout much of 2017, and Melcher, who lives in Holly, says they'll depend on what's left over.

"We were blessed last year with some moisture, so that's given us the ability to hold on and wait for a little bit of this spring moisture hopefully," he says.

But it's not just crops. Dustin Stein has a cattle ranch in Mancos, located in southwest Colorado. He's a relatively young farmer, in his 30s, and started out in the midst of the 2012 drought.

He says in the roughest, driest years, farmers have to make sacrifices because there's not enough grass growing in the fields.

"In a drought year, you're forced to sell off your assets [cows and heifers] in a way that helps you keep your other assets alive," Stein says, adding that it doesn't just affect ranchers that year, but down the line in terms of herd numbers and profits.

Farmers can get protection from these extreme climate events through crop insurance. In years without such events, farmers and private insurance companies cover much of the costs through premiums. But when disastrous storms or droughts strike, the federal government is stuck with most of the bill. In 2012, for example, there were $17 billion in crop insurance payouts, and the government covered $12 billion. That was an unusually high payout (more than twice the cost of recent years), but it's an illustration of just how much a major climate event can affect financials.

There's also a need to adapt, Stein says, though he knows young farmers may not have the experience to understand how their fields stand up to prolonged drought.

"We're constructing a barley fodder house right now to grow hydroponically grown barley," he says. "That will allow me to not have to sell any animals and be able to keep them healthy and alive through the summer, even though I can't grow any grass on the acreage that we own or lease."

But sometimes even adaptations can't stand up to Mother Nature. Stein says he's hoping for the best. If he doesn't see the grass come back to life in spring, though, he knows the drought is starting to impact his region.

Angel says his agency will likely know whether the Midwest is in for a bad drought by late spring.

"May is a critical month because typically we get a lot of rain in May. So if you don't get it in May, then that's your last best chance of avoiding the drought," he says.

Back in Jerseyville, Schafer says he'll need at least a little rain by April to help his corn sprout. Yet, he's also concerned about possible massive storm events, because flooding isn't good for his crops, either.

But even with all the possible challenges ahead of him, Schafer is like most farmers: optimistic.

"We're the most optimistic people there ever was. Or we wouldn't put a seed in the ground every spring," he says. "We just know it's going to get better."

This story comes to us from Harvest Public Media, a reporting collaboration focused on food and agriculture. Follow Madelyn on Twitter: @MadelynBeck8