Accessibility links
Food Stall Serves Up A Social Experiment: White Customers Asked To Pay More : The Salt To highlight racial income disparity, a chef in New Orleans opened a food stall at which he asked whites to pay $30 and people of color to pay $12 for the same meal. How did it play out? 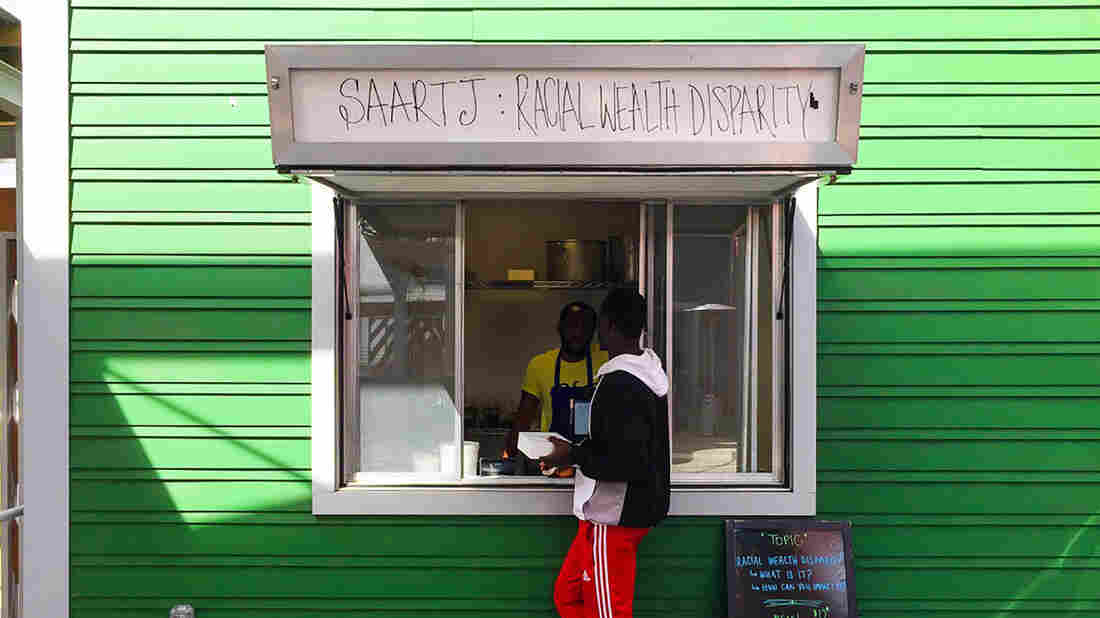 A customer approaches the window at Saartj, a pop-up food stall in New Orleans running a social experiment. Customers of color are charged the listed $12 price for a meal. White customers are told about the income gap in New Orleans between whites and African-Americans and asked whether they want to pay $30 instead, a price that reflects the gap. Deji Osinulu hide caption 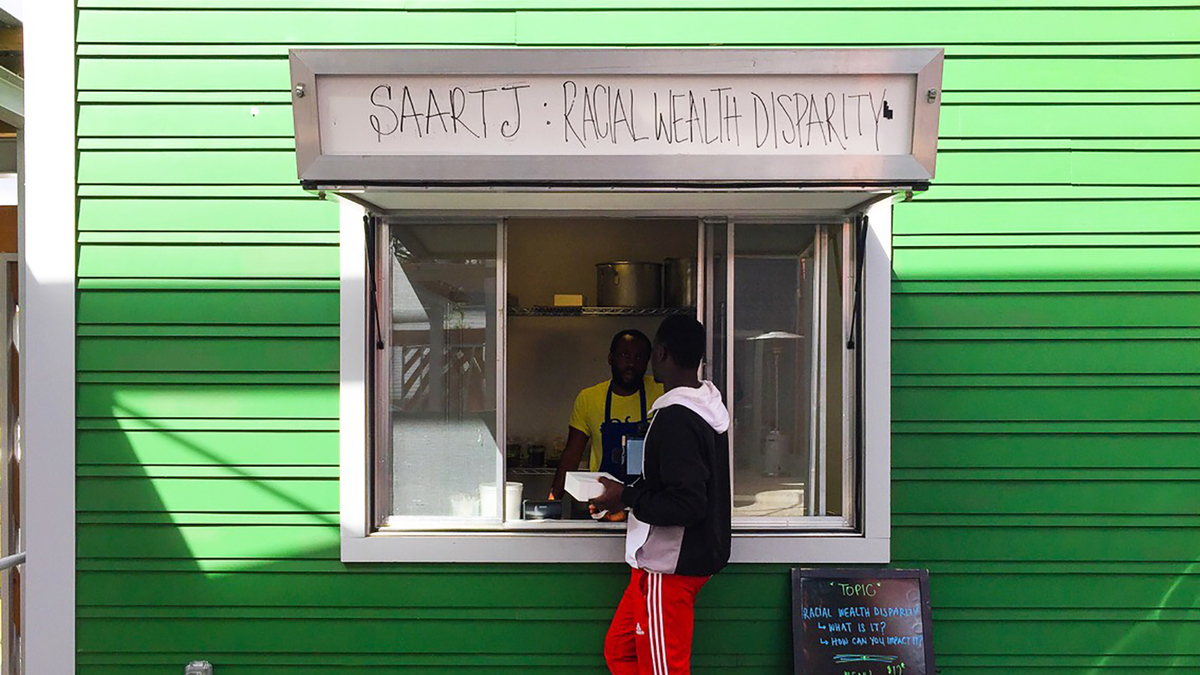 A customer approaches the window at Saartj, a pop-up food stall in New Orleans running a social experiment. Customers of color are charged the listed $12 price for a meal. White customers are told about the income gap in New Orleans between whites and African-Americans and asked whether they want to pay $30 instead, a price that reflects the gap.

Can a $12 lunch change the way people think about racial wealth disparity in America? How about a $30 lunch? That's the premise behind a social experiment playing out in a New Orleans food stall.

Chef Tunde Way opened his pop-up stall in the city's Roux Carre venue in early February. The listed price for the Nigerian food is $12. But when white people walk up to order, they are asked whether they want to pay $30. Why? "It's two-and-a half times more than the $12 meal, which reflects the income disparity" between whites and African-Americans in New Orleans, says Wey. 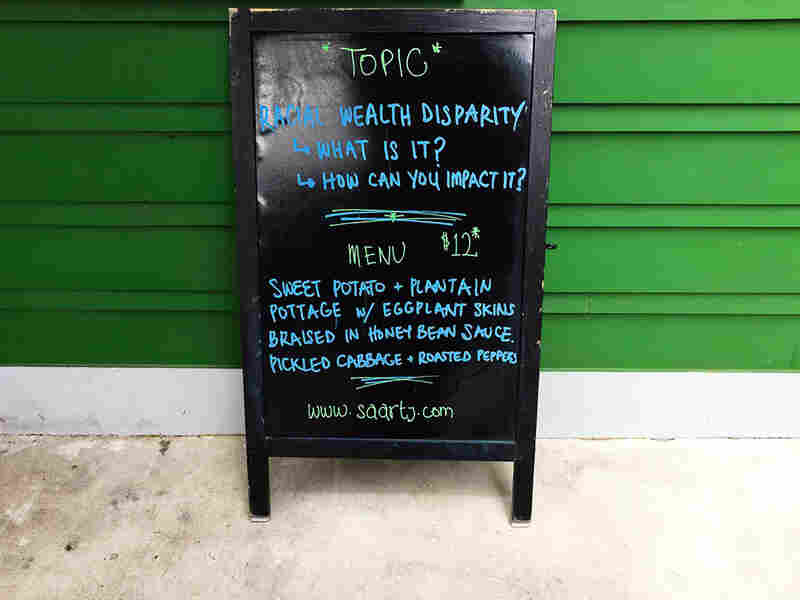 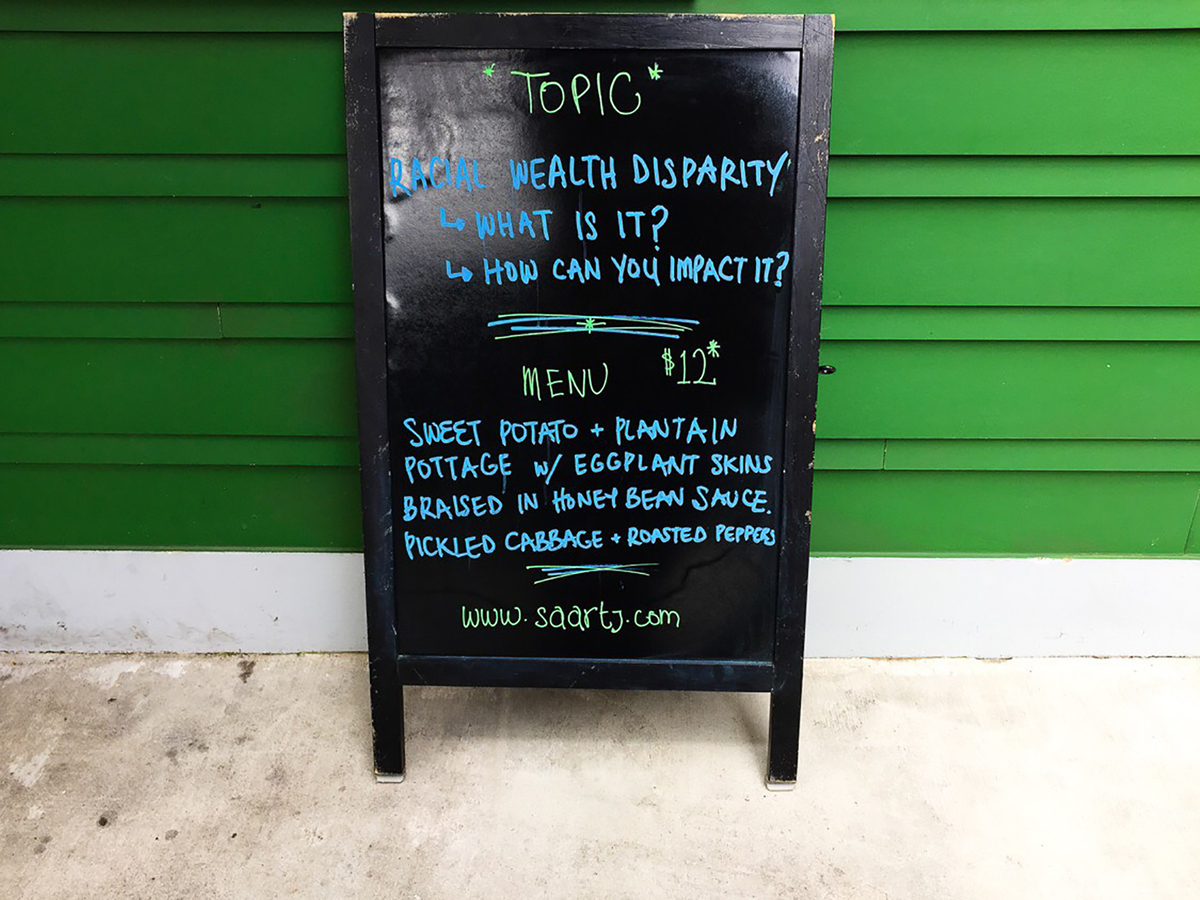 Saartj offers Nigerian food and a lesson in socioeconomics.

Wey says that when customers come up to his window to place an order, he tells them that his food stall aims to engage people on the topic of racial income and wealth disparities and to share statistics on these disparities. He then informs them that customers who identify as white are being asked to pay the higher $30 price to reflect these disparities. Customers also have the option to pay the listed $12 price. The difference between the $12 and $30 meals, all customers are informed, will be redistributed to minorities who buy food at the stall. How do white customers react to the proposition?

"Some of them are enthusiastic, some of them are bamboozled a bit by it," Wey says. "But the majority of white folks, nearly 80 percent, decided to pay."

"That was definitely higher than we expected," says Anjali Prasertong, a graduate student in public health at Tulane University who helped Wey design the experiment and collect data.

Customers who agree to buy lunch were asked to fill out a brief survey online. A subset of these diners were also pulled aside and interviewed about how income and wealth disparities have played out in their own lives.

Prasertong points to one anecdote from an African-American customer whom she interviewed. "I asked her, 'If you had been given access to more resources while you were growing up, would that have changed your life in any way?' " Prasertong recalls. "She immediately had an example."

The woman told Prasertong that when she was a college student, she was offered an unpaid summer White House internship in Washington, D.C. But that meant she would have had to find a way to support herself in another city instead of spending the summer earning money that she could use to help pay for school in the fall. The woman passed on the internship, Prasertong says, because "she realized, 'Oh, it's just for rich people' " – meaning students whose parents could afford to subsidize them while they worked for free. "She still went on to be successful, but if she'd done that internship, who knows what she'd be doing?" 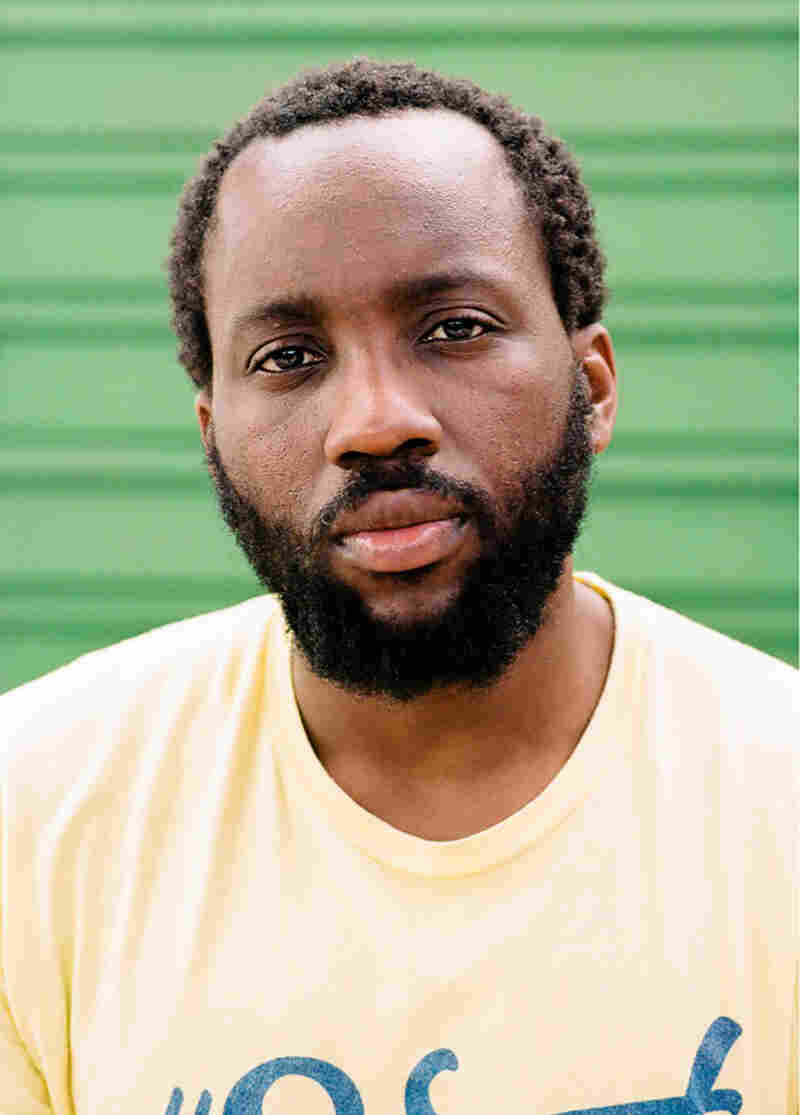 Nigerian chef and writer Tunde Wey conceived his food stall experiment as a way to get people thinking about the racial income and wealth gaps in America and how it affects their own lives. Deji Osinulu hide caption 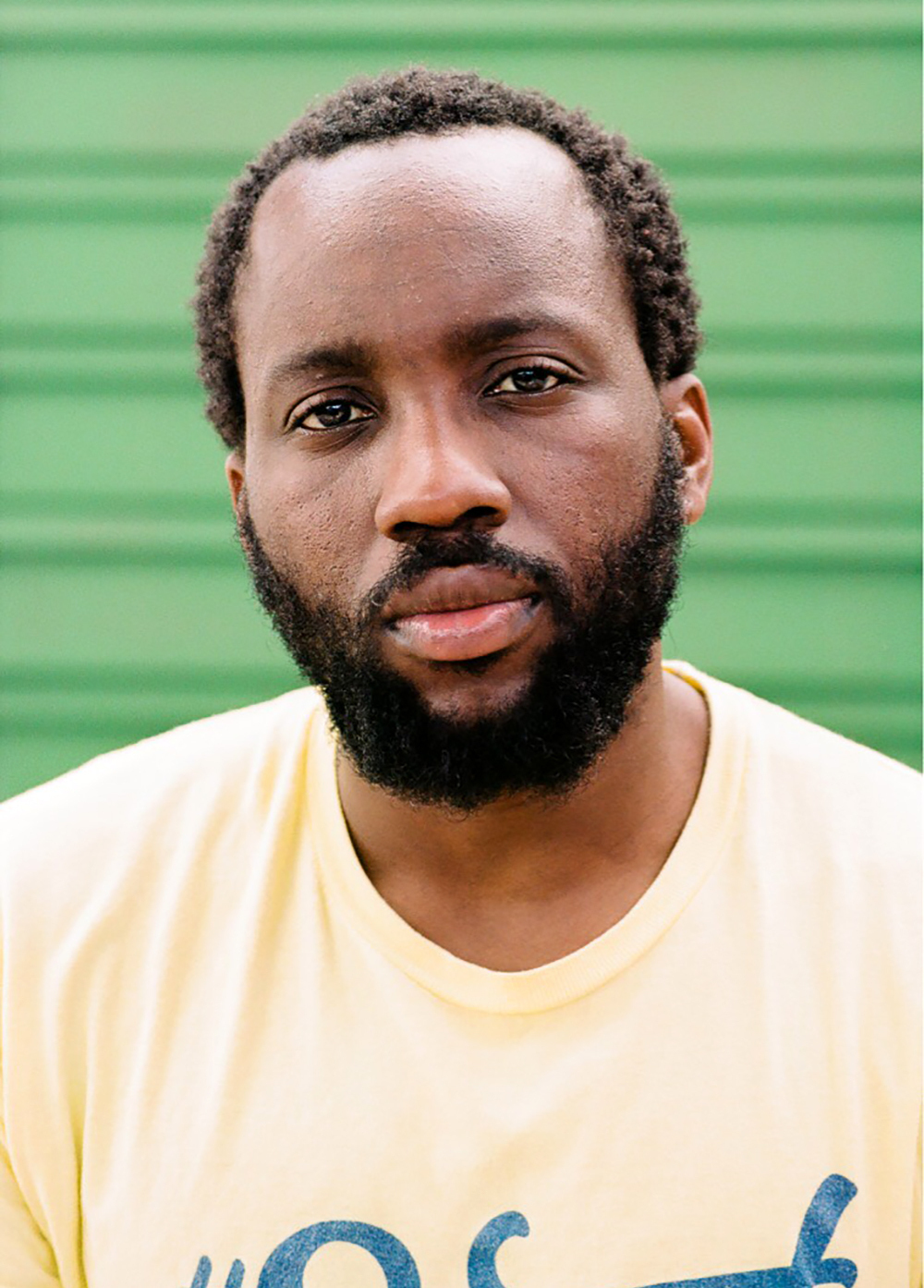 Nigerian chef and writer Tunde Wey conceived his food stall experiment as a way to get people thinking about the racial income and wealth gaps in America and how it affects their own lives.

"One of the things I took away from interviewing people was a greater awareness that people of color have thought about wealth disparity and how it has touched their lives and the kinds of things they've lost out on because they didn't have access to the resources their white friends did," says Prasertong. "Not that [white people] weren't aware, but they never really thought about how ... that might have affected where they are in the world in relation to people of color. They never stopped to think, 'Oh, that car my parents gave me in college allowed me to drive across town to get a good job.' "

As Prasertong points out, "It's not a strict scientific study." One limitation of this experiment is that the customers who came to the stall were all in a higher-than-average income bracket. Prasertong says that may be one reason why the vast majority of customers of color – African-Americans, Latinos and Asians – declined to sign up to receive the redistributed money made from charging whites the higher price.

As of Feb. 28, the day the premise of the experiment was revealed in a Times-Picayune article, 64 people had completed the survey, which included 32 whites, Prasertong says. Twenty-five white customers paid the extra $18, adding up to a pool of $450. Only six people of color had signed up for distributions, which they would split evenly among them, $75 each.

The food stall — called Saartj, a reference to a 19th-century black South African woman infamously paraded as a "freak show" in Europe — will be open through Sunday, though the data collection part of the experiment is now over.

While this experiment focused on racial income disparity in New Orleans, the numbers when it comes to the racial wealth gap in America are even starker. White families accumulate more wealth more quickly than do families made up of people of color. As NPR's Code Switch team has reported:

There are many reasons cited behind this gap, including slavery and institutional and governmental discrimination that excluded people of color from programs that helped Americans build wealth and pass it down through the generations. As Code Switch writes: "Segregation and redlining by banks made it impossible for many black and Latino families to secure mortgages, for example. The GI Bill, which helped establish an American middle class by helping veterans pay for college and buy homes after World War II, mostly excluded people of color."

One goal of his experiment, says Wey, is to get people to think about how the racial wealth and income gaps affect their own lives and also how they can as individuals be a force for change.