Accessibility links
From Almonds To Rice, Climate Change Could Slash California Crop Yields By 2050 : The Salt An analysis of nearly 90 studies finds that warming temperatures may alter where key crops grow across the state, which provides about two-thirds of America's produce. 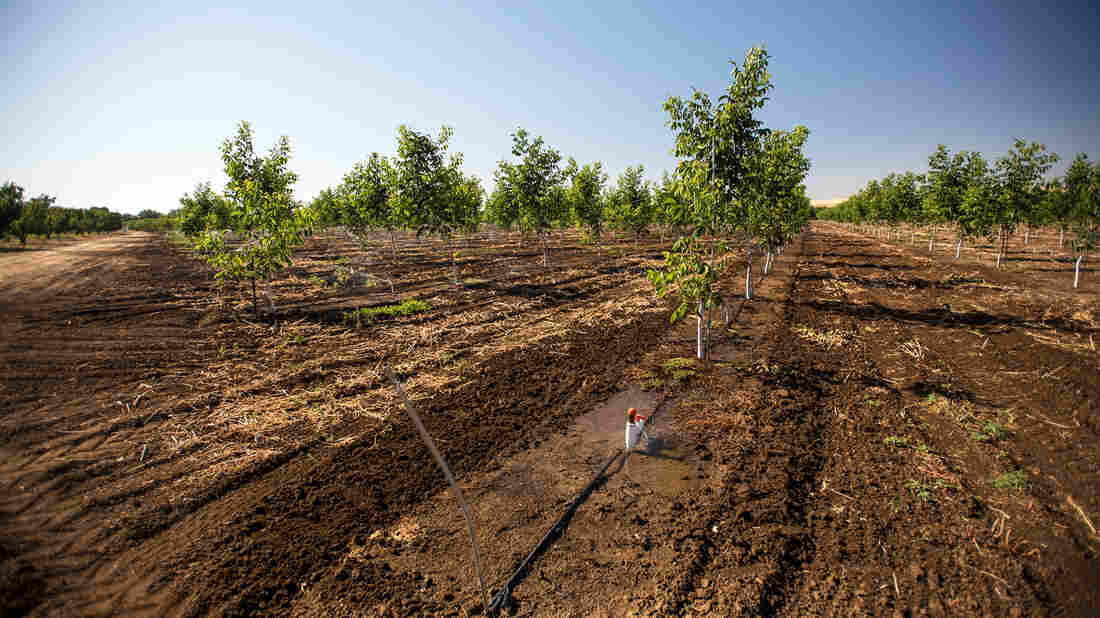 Walnut trees at a farm in Byron, Calif. An analysis of nearly 90 studies finds warming temperatures may alter where key crops grow across the state, which provides around two-thirds of America's produce. David Paul Morris/Bloomberg/Getty Images hide caption 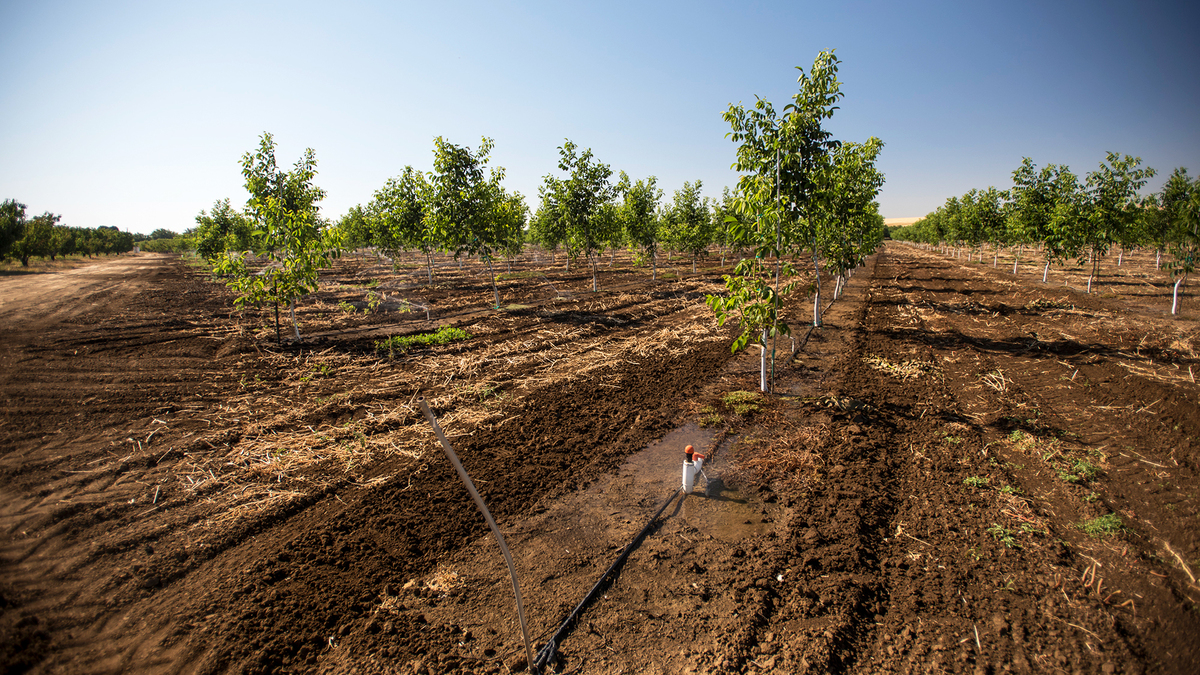 Walnut trees at a farm in Byron, Calif. An analysis of nearly 90 studies finds warming temperatures may alter where key crops grow across the state, which provides around two-thirds of America's produce.

Climate change could decrease the yield of some crops in California by up to 40 percent by 2050. That's a big deal for farmers in the state, which provides about two-thirds of the nation's produce.

California farmers grow more than 400 commodity crops. Tapan Pathak, a University of California Cooperative Extension specialist based in California's Central Valley, and his research team analyzed 89 studies on climate change and discovered that warming temperatures may alter where crops grow across the state. Their findings were published in the journal Agronomy.

"In order to make California agriculture more sustainable, we have to act now," Pathak says.

As the climate continues to change and drought and heat waves become more frequent, Pathak says the challenges agriculture will face are going to intensify. He's referring to things like how the lack of cold temperatures will impact trees that need a certain number of chill-hours, or sleep each year, as well as increased impacts from pests and diseases.

"That could adversely impact yields and production for some highly valued crops in California," Pathak says. The study reports "several fruit and nut crops are losing yield and decreasing in acreage . . . as a direct consequence of increased winter and nighttime temperatures."

The study also points out that climatic conditions — warming temperatures and a shrinking snowpack — by the end of the 21st century may make it difficult for the state to even support some of its main tree crops. The study suggests that by the middle of the century, California's Central Valley won't be able to support crops like peaches, walnuts and apricots. That number jumps to 90 percent by the end of the century. Almonds, avocados, cherries, table grapes, corn, tomatoes, rice, strawberries and others are expected to suffer crop yields as well.

Walnuts would be the hardest-hit crop because they "require the highest number of chill hours, implying a future decline in walnut acreage within the valley," the authors report. Nearly 99 percent of the nation's supply of the crop originate from California and support around three-quarters of the global supply of the nut.

What can be done now to mitigate this?

While California farmers and ranchers have long experienced fluctuations in weather, the authors say that "the increased rate and scale of climate change is beyond the realm of experience for the agricultural community." And that may translate into food security issues at the state and national level.

Peter Gleick, an expert in climate and water for the Oakland-based Pacific Institute, read the study and says, "it is critical that we start making decisions now to reduce the threats later."

Gleick says even though some crops will fare better than others, "impacts will be deeply negative, especially if we are not more aggressive about both reducing emissions and putting in place more climate resilient agriculture."

He says farmers must take an active role in addressing climate change and the state is going to need to help by expanding "efforts to help communities that will be negatively affected by changes we won't be able to avoid."

This story comes to us from member station Capital Public Radio in Sacramento.