Accessibility links
Oscar-Nominated 'Knife Skills' Showcases Ex-Cons And Odd Ducks In The Kitchen : The Salt The documentary chronicles the opening of Edwins, a fine-dining restaurant in Cleveland that provides education, housing and steady employment for former inmates. 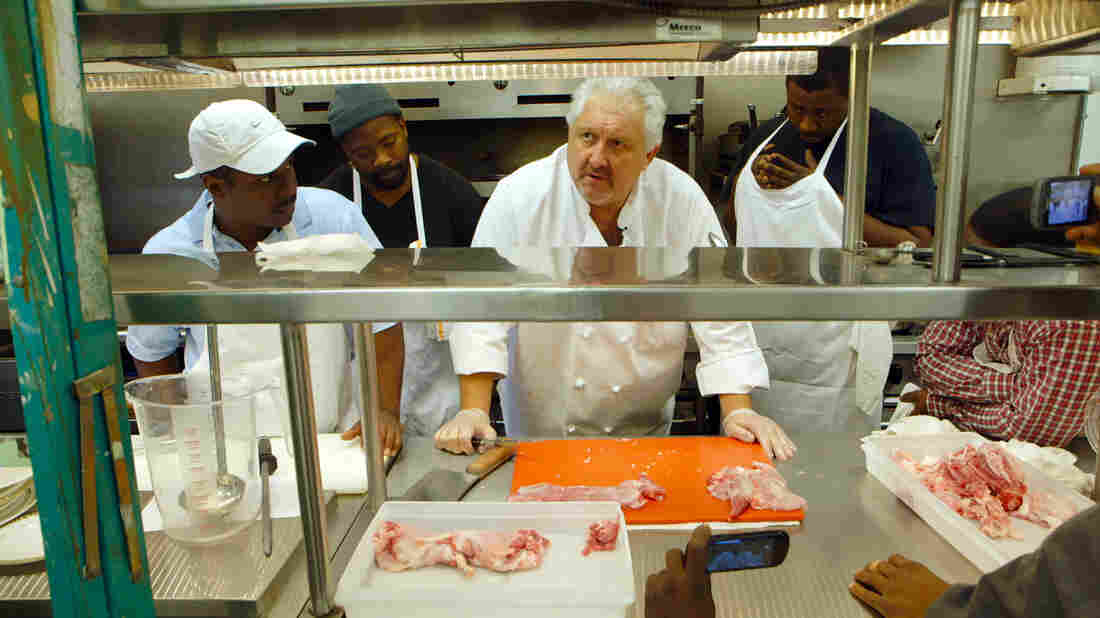 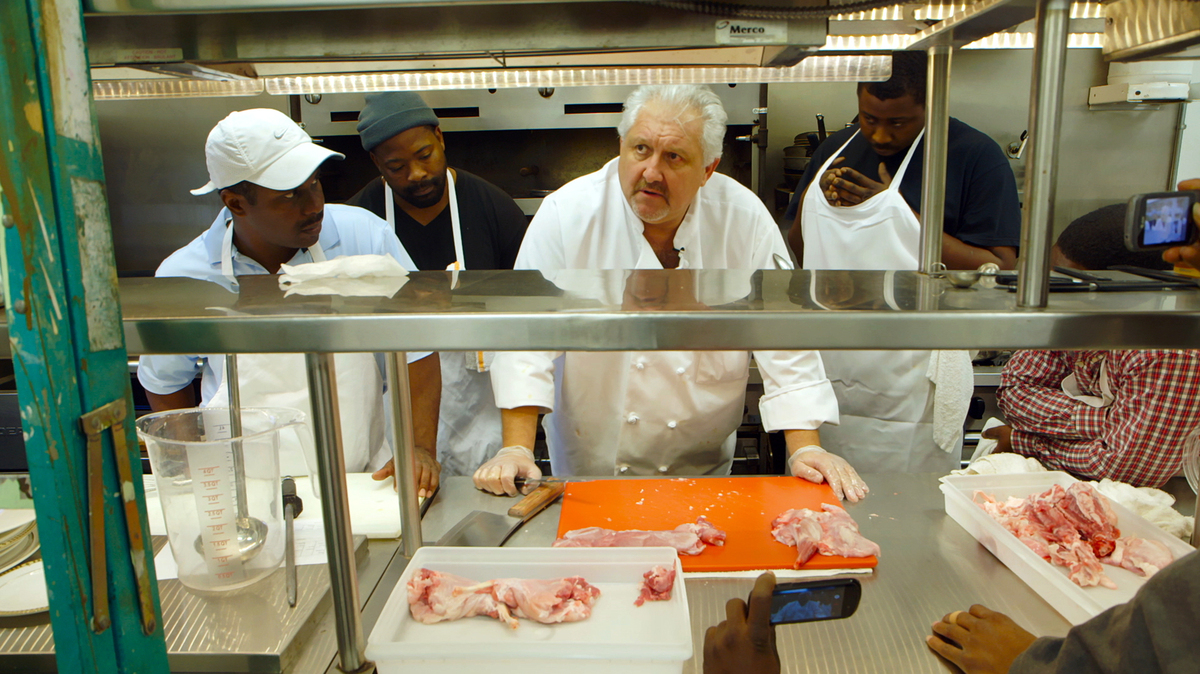 Chef Gilbert Brenot teaches trainees at Edwins about meat preparation. The fine-dining restaurant in Cleveland provides education, housing and steady employment for former inmates and is the subject of an Oscar-nominated documentary.

Filmmaker Thomas Lennon was not looking for a new film project when he went to dinner at a friend's house; he was just trying to make conversation with a fellow guest who was, in Lennon's words, "an odd duck." However, says Lennon, "I'm a filmmaker, so I ask people questions. What unfolded was this story — and you'd have to be deaf, dumb and blind to not know that there was potential there."

The result of that initial encounter was Knife Skills, nominated this year for an Academy Award in the documentary (Short Subject) category. It follows the opening of Edwins, a fine-dining restaurant in Cleveland that is staffed almost entirely by former prison inmates.

Edwins is the brainchild of Lennon's "odd duck" dinner companion, Brandon Chrostowski, a former employee of New York restaurateurs David and Karen Waltuck, the hosts of that fateful dinner party. Chrostowski's memory of the occasion, however, is a little different: "David made meatloaf with shiitake mushrooms in it," says Chrostowski. "It was an exquisite meatloaf."

It's a telling comment from a man who says, "A restaurant saved my life." He clearly loves food and has the restless, unrelenting energy found in so many in the restaurant industry — a community that regularly embraces odd ducks.

Chrostowski grew up in Detroit, in a family where he says he wasn't expected to accomplish much. He seemed to be well on the way to fulfilling that prediction when he found himself standing in front of a judge with the power to impose a 10-year sentence for a drug offense. Instead, he was given the opportunity to be mentored in a local restaurant, beginning a career path that would take him to train at the Culinary Institute of America and work in both the front and back of the house in a series of acclaimed restaurants in New York and France. Along the way, he also became a sommelier and fromager.

But Chrostowski specifically chose to go to Cleveland to create a kind of hybrid restaurant and social services concept to provide education, housing and steady employment for ex-convicts, who face few prospects and daunting recidivism rates: National statistics show that some 67 percent of inmates are rearrested within three years of release. Why Cleveland? Because the city boasted some of the country's lowest high school graduation rates in 1998, the year that Chrostowski barely graduated from high school himself and almost ended up in prison. He felt that there was a population in this Midwestern city that he both understood and could help.

As Chrostowski says in the film, "I often feel ugly ... When I work in a restaurant, I can put on a suit and feel great."

It was this rawness, this need to share stories of pain and joy, that grabbed Lennon as he arrived at Edwins to document the opening of the restaurant in 2013. "I was unprepared for how vulnerable these men and women were, how exposed they felt," says Lennon. "They were so eager to talk, to be heard, to listen to advice, to ask questions. That was attractive to me as a filmmaker, but, at the same time, I felt protective, I wanted to wrap a thick layer of skin around them." 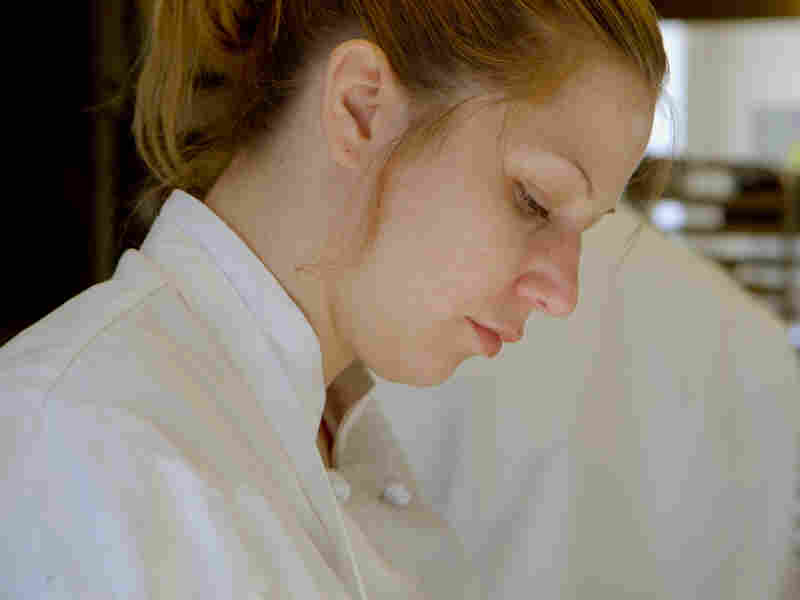 Marley Kichinka, a trainee at Edwins who previously struggled with heroin addiction. She finds her passion in the all-consuming energy and chaos of the kitchen, even though there are setbacks. TFL Films LLC hide caption 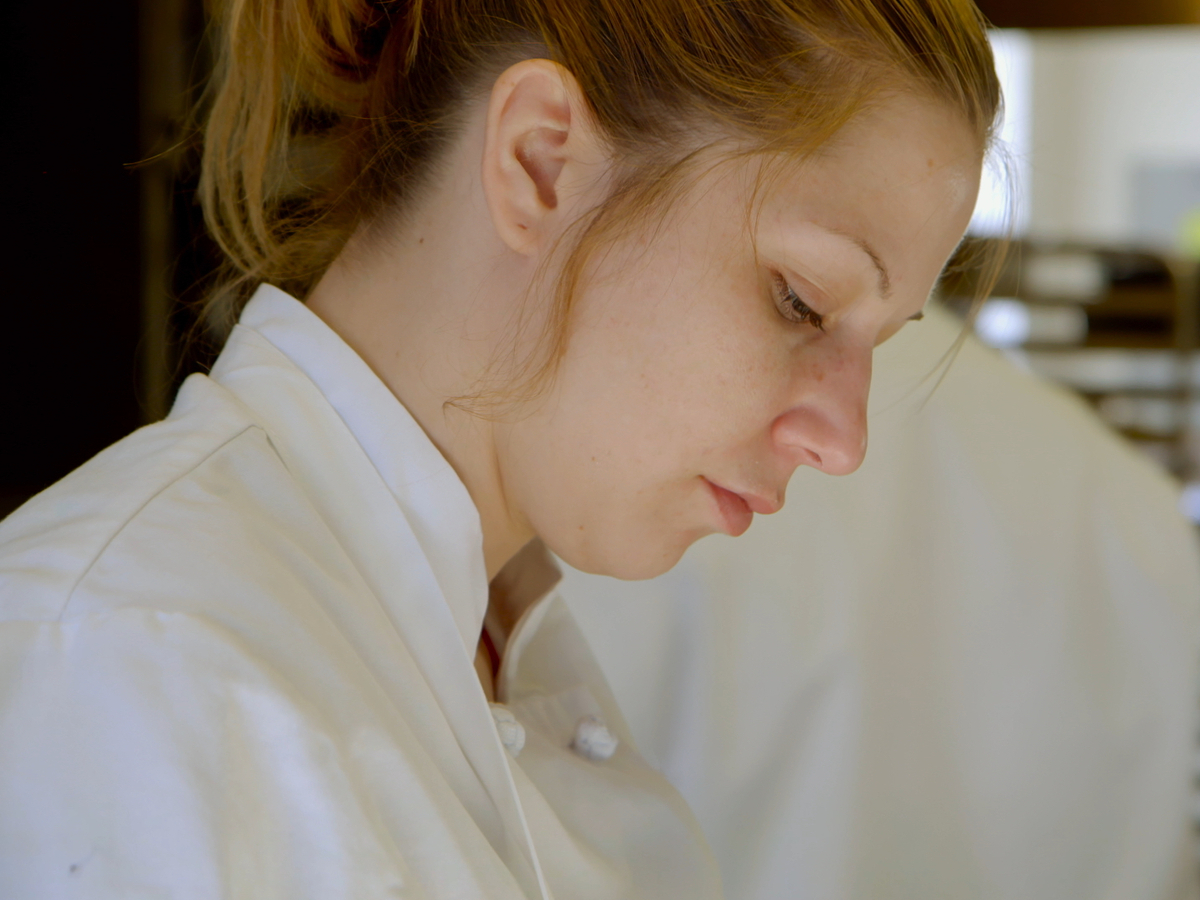 Marley Kichinka, a trainee at Edwins who previously struggled with heroin addiction. She finds her passion in the all-consuming energy and chaos of the kitchen, even though there are setbacks.

Indeed, when some of the former inmates profiled in the film share their feelings, the words are heart wrenching. Marley Kichinka, a drug offender, says at one point, "Heroin took over my whole life. I'd go to sleep and pray not to wake up, and I'd be so mad to be alive." She finds her passion in the all-consuming energy and chaos of the kitchen, even though there are setbacks.

The film itself highlights the discipline of high-end restaurant work, the importance of how to julienne a zucchini perfectly every time, recommending the correct cheese and wine pairings, the pronunciation of unfamiliar French ingredients and techniques. For Lennon, the setting was essential to the narrative. "People are interested in food," he says, "so, rather than tackle the subject matter of reentry into life after prison directly, this gave me a surprising way of telling that story. I want to tell you what life is like for people coming out of prison, but if I take you inside this improbable restaurant, you're really going to learn what it's like in a way that could be more accessible."

Indeed, restaurant kitchens across the country are top employers of former inmates, according to Restaurant Opportunities Centers United. But Chrostowski has found that restaurant owners typically don't want to have that particular statistic broadcast to their patrons. As shown in Knife Skills, trumpeting the ex-con staff can be used to help fill seats with curious diners, but the goal is to provide top-notch food and service so the seats will stay filled when the novelty has worn off — not to mention provide the staff with skills that can translate into well-paying jobs. So far, Edwins has had 250 former inmates graduate from its program, with 98 percent employment rates and just 1 percent recidivism. The restaurant itself has been awarded three stars from the Cleveland Plain Dealer.

Still, as captured in the film, it's a delicate dance. During one scene, Chrostowski expresses concern over a trainee behind the bar who might have an addiction issue, which prompted filmmaker Lennon and editor Nick August-Perna to consider how to respectfully share that moment. "The film doesn't resolve whether that person has addiction issues," says Lennon, "but I thought it was an important window into Brandon's methodology, that executive toughness of saying, 'Let's give him an hour but if he can't f------ do it, let's get him out of there.' "

At the end of the scene, Chrostowski offers a quick, but important, compliment to the trainee who has just delivered a glass of wine to a customer, saying, "That's a perfect pour."

For Chrostowski, those are the moments that show him that Knife Skills has accomplished exactly what he hoped it would.

"There were half a dozen media outlets calling me who wanted to do a reality show," he says, "and I just kept saying 'No, thank you." But when I met Tom [Lennon], I believed he had integrity. I needed someone to capture the truth so it would be accessible to everyone."