Accessibility links
The Russian Chef Who Is Bringing Back His Homeland's Colorful, Classic Cuisine : The Salt Before the Soviet period, "Russian food had color," says Vladimir Mukhin of Moscow's world-famous White Rabbit restaurant. He aims to honor those flavors, as well as locally source his ingredients. 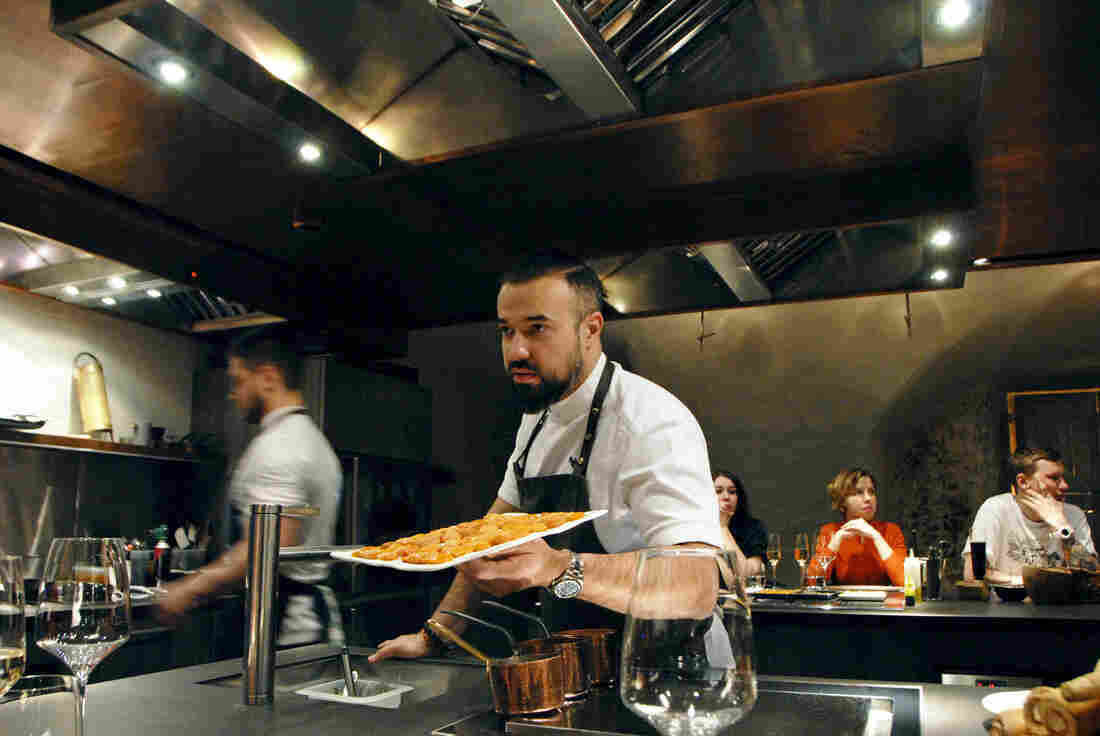 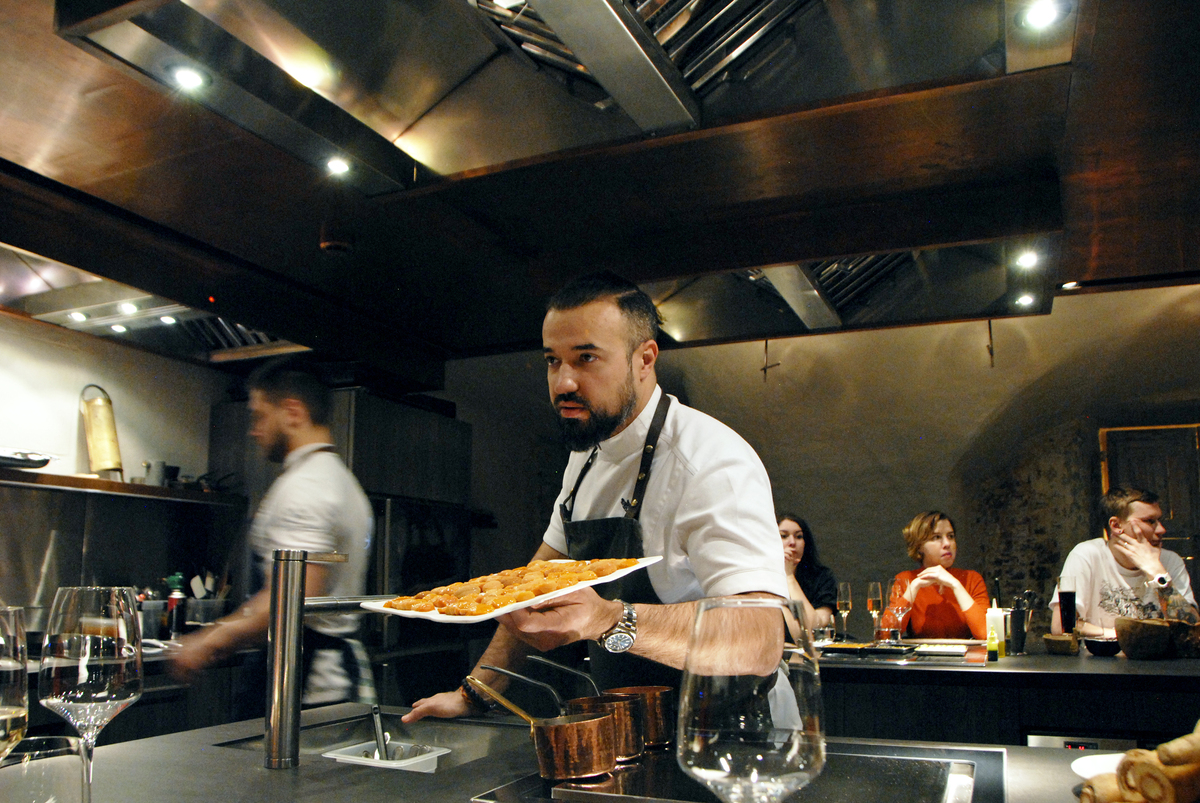 Chef's Table restaurant in Moscow is a cozy space. There are about 20 seats at a horseshoe-shaped bar with a kitchen in the middle. It's a small room, but the man who runs this place has a big personality.

Diners seated around the horseshoe burst into applause when chef Vladimir Mukhin sweeps into the room in a snow-white, short-sleeved chef's jacket, his long hair tied back in a man bun.

And why wouldn't they applaud? Mukhin is about to serve a 13-course tasting menu with dishes like lardo made from strips of coconut, scallops with something called eucalyptus snow on top and homemade black bread with three types of caviar.

But his most famous space is called White Rabbit, named one of the world's 50 best restaurants last year. It's an over-the-top, multi-level glass atrium at the top of a skyscraper. The furniture is upholstered in lush suede; there are velvet pillows everywhere, jewel-toned accents and paintings of anthropomorphized white rabbits in royal regalia. It's like Alice in Wonderland meets Imperial Russia. And that nod to pre-Soviet Russia is not an accident.

He says that Soviet food was heavy, drab and smothered in mayonnaise. Fresh ingredients were rare. Food was just sustenance, nothing to be celebrated. 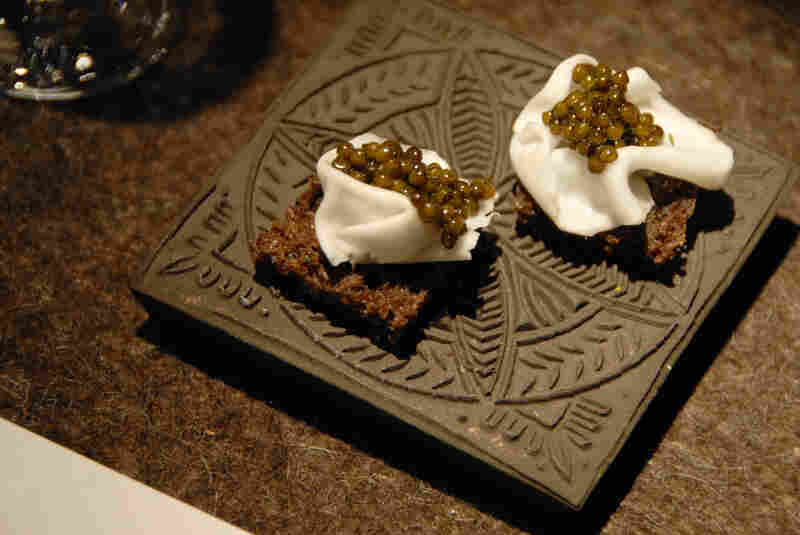 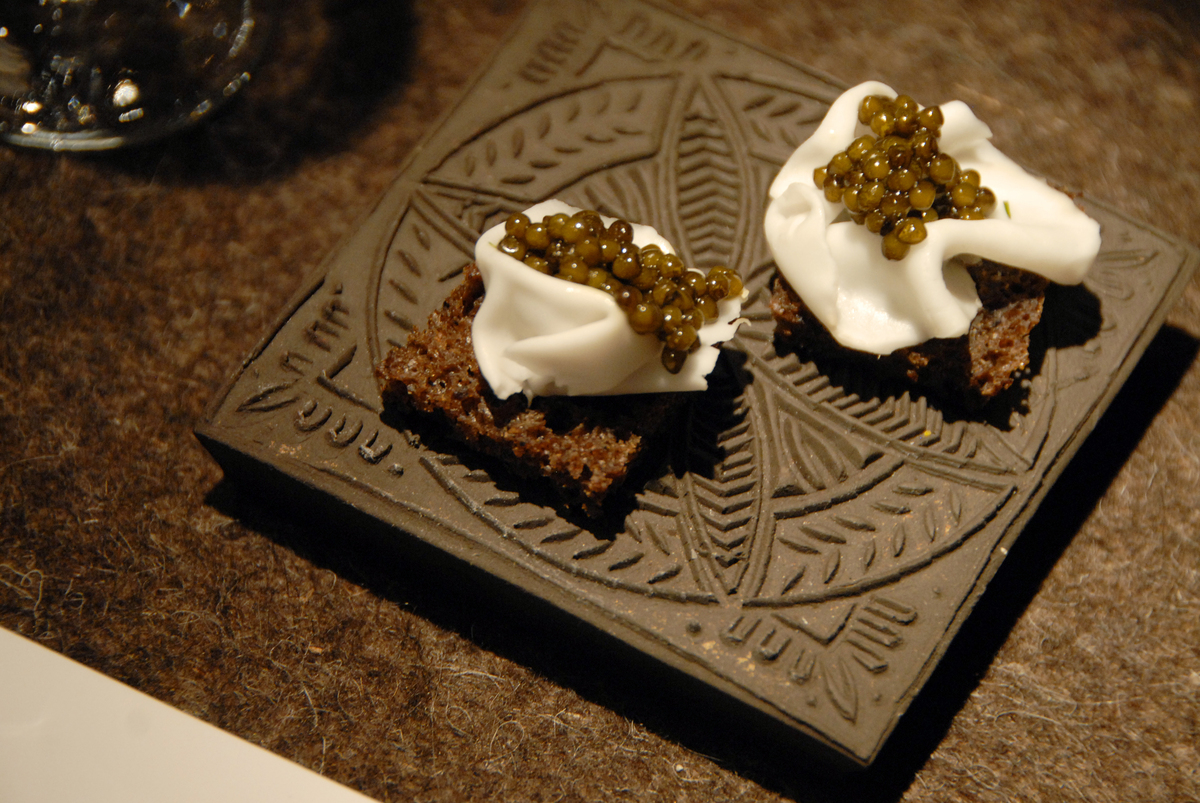 But there were vestiges of pre-Soviet cooking where Mukhin grew up. He's a fifth-generation chef, so his grandmother would cook recipes that had been in the family for decades.

Her honey cakes were sublime, he says. Her borscht with crayfish was a revelation. No one could beat her Russian black bread.

When Mukhin opened White Rabbit in 2011, he did so to celebrate and elevate these classic flavors. He sourced his ingredients from Russian farms. He even bought farms so that he could grow whatever he wanted.

But high-end Russian cuisine wasn't an easy sell to the urbane population of Moscow. The sophisticated set dined at French, Japanese and Italian restaurants.

Then help arrived in the most unlikely way — through sanctions. In 2014, the Russian army invaded Ukraine and annexed Crimea. The U.S. and its NATO allies responded by slapping sanctions on Russia. Russian president Vladimir Putin hit back with an embargo of goods from Western countries. No more French cheeses, Italian olive oil or Spanish tomatoes for Russian chefs. 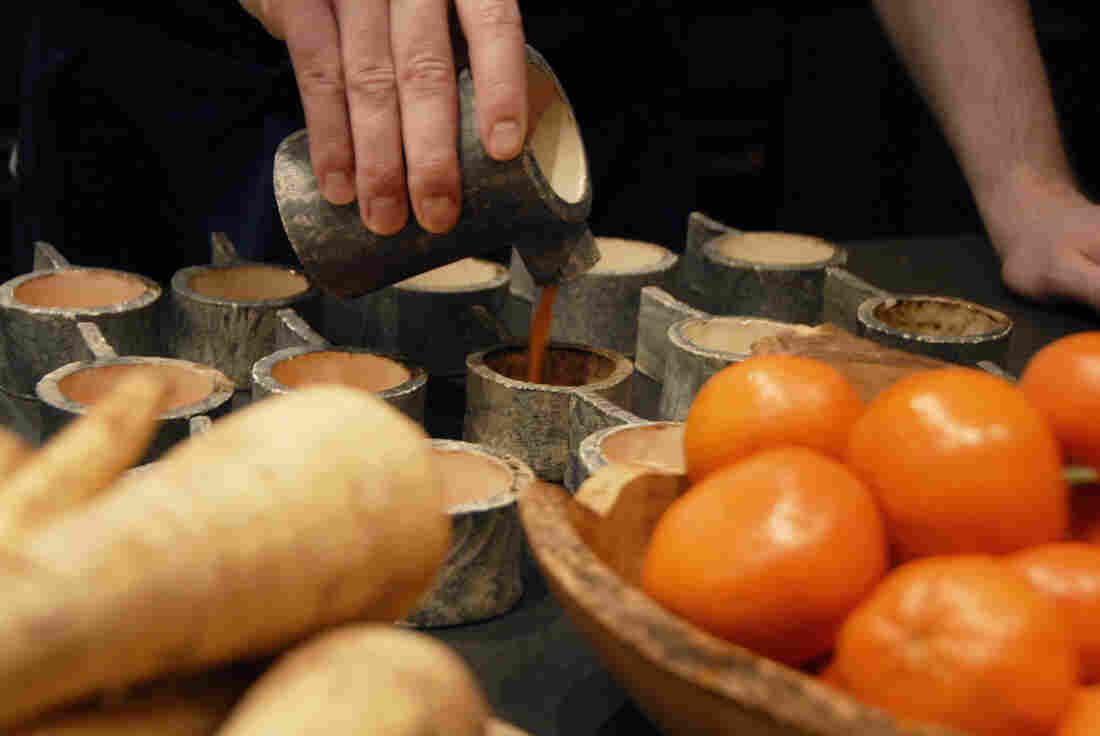 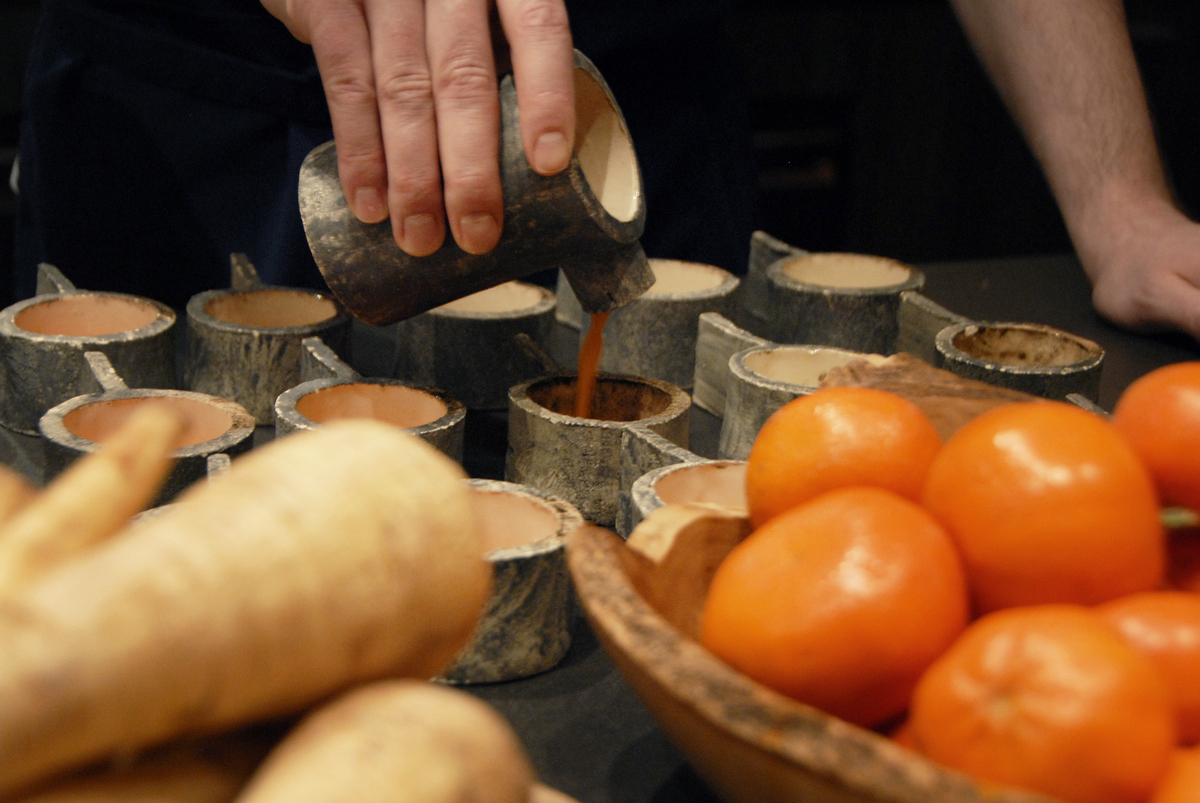 High-end Russian cuisine wasn't an easy sell to the urbane population of Moscow.

But Mukhin, with his farm-to-table business model, sniffed opportunity:

"So now we start to make some cheese from Italy in Russia. Because we have beautiful milk, why can't we make the cheese here? That's why my idea is: We must grow Russian cuisine."

And he's taken that idea on the road. Mukhin's been all over the world preaching the gospel of Russian cuisine. He recently caught up with a barbecue chef in Dallas.

Mukhin tried American-style coleslaw while in that Texas city and was not impressed. So he turned the barbecue chef on to Russian-style fermented cabbage as a side dish instead of coleslaw." He tried it and said, 'Oh, yes. This will work well.'"

The diners who recently gathered at Chef's Table were treated to a universe of ideas presented via ingredients grown in Russia. The name of the tasting menu that night was "Russian Evolution." 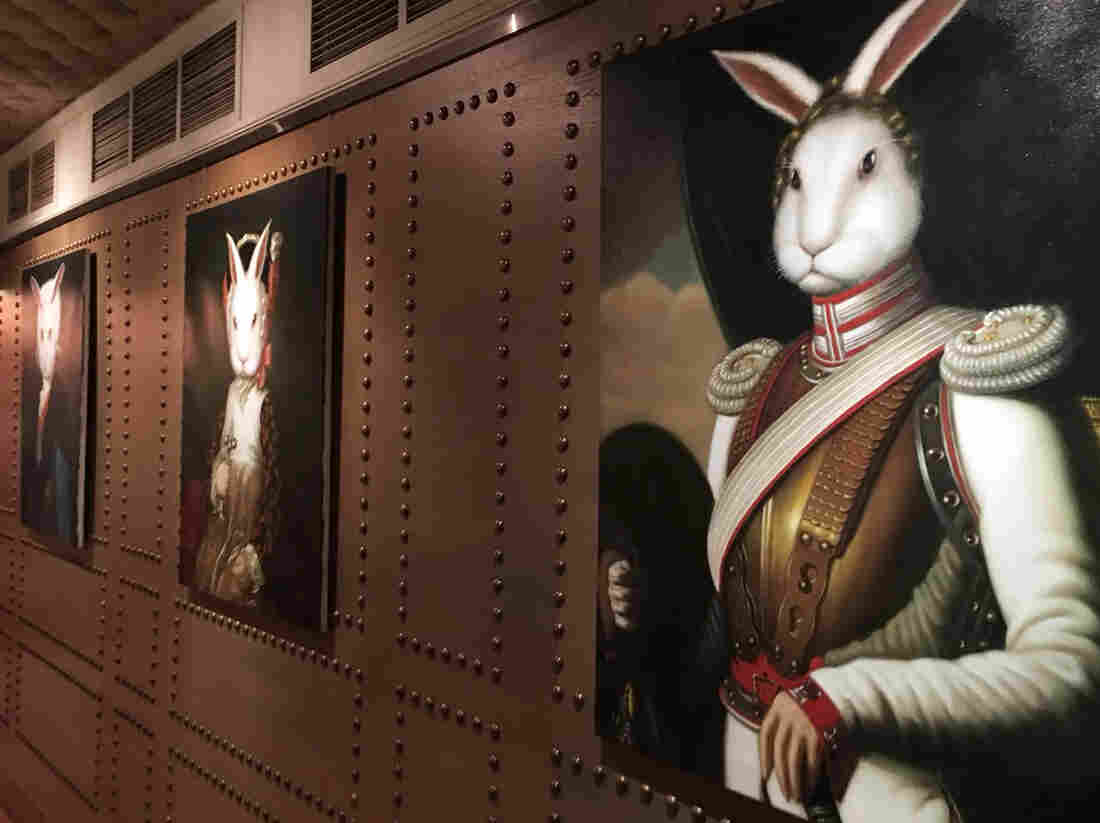 Portraits of rabbits are displayed at White Rabbit restaurant in Moscow. Through his cuisine, Mukhin aims to celebrate and elevate classic Russian flavors, as well as use ingredients from Russian farms. Monika Evstatieva/NPR hide caption

Mukhin's cuisine speaks to both the future and the past.