Accessibility links
Kiss Off, You're Irish: In Experiment, Detroit Pub Bans St. Patrick's Day Revelers : The Salt To help humanize and bring historical perspective to the issue of immigration, the "No Irish Pub" turned away people based on two criteria: being Irish or wearing green to celebrate St. Paddy's Day. 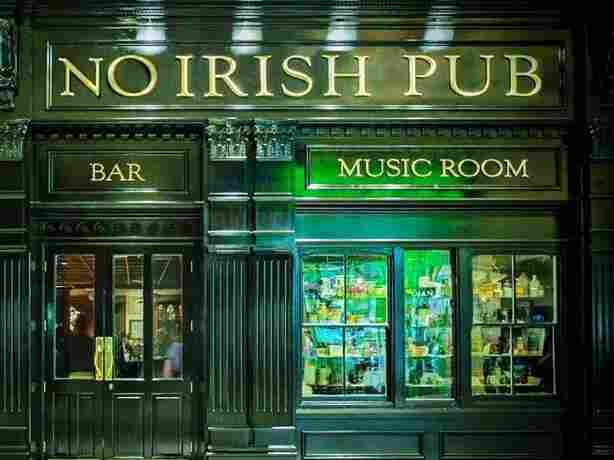 The idea was conceived as a way to highlight how current anti-immigration sentiment echoes slurs against Irish people who came to America after the potato famine in the 1840s. Dan Margulis hide caption 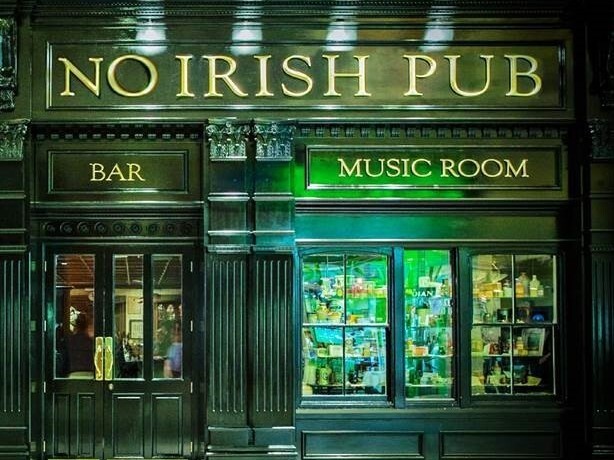 The idea was conceived as a way to highlight how current anti-immigration sentiment echoes slurs against Irish people who came to America after the potato famine in the 1840s.

Usually the image of a pub is one of welcome, a cozy place where neighbors gather to share friendship and a pint or two. But Dan Margulis, an advertising professional with a personal interest in immigration issues, decided to use the concept for a kind of social experiment along Detroit's St. Patrick's Day Parade route — and there was no friendly welcome involved.

Inspired by the political debate surrounding the Deferred Action for Childhood Arrivals (DACA), Margulis pulled together a group of friends in just three days to create and document the "No Irish Pub," which operated for a handful of hours on March 11th, the day of the St. Patrick's Day Parade, without actually serving a single drink. Instead, a bouncer, portrayed by local contractor Bill Johns, sat on a stool outside the building and turned would-be patrons away based on two criteria: being Irish or simply wearing green to celebrate St. Patrick's Day. A video produced by Atlas Industries is now garnering national attention from people on differing sides of the immigration issue.

"St. Patrick's Day is the one day that everyone becomes Irish," says Margulis, "so it made sense to use it as a way to humanize the immigrant debate. It's also a day that everyone really wants to get into a bar, so by not letting people get in, it seemed like a way to encourage empathy."

The temporary "pub" was sandwiched between two of Detroit's most popular Irish bars in the Corktown neighborhood — so named for the immigrants from County Cork, Ireland, who populated the area in the mid-19th century. The idea was conceived as a way to highlight how current anti-immigration sentiment echoes the slurs used against Irish immigrants as they began to arrive by the millions in the United States following Ireland's potato famine in the 1840s. The exterior walls were decorated with historical anti-Irish signage such as "Help Wanted: No Irish Need Apply."

"We chose to make it a 'pub' over a 'bar,'" says Margulis, "because a pub has nostalgia, it transports you across oceans. It has warmth and is an inviting space. Bill [Johns] had the most difficult part, though, because he was the one who had to tell people they couldn't come in, and he's actually a really nice guy."

Being confrontational with a bunch of strangers was not easy for Johns, who found some Dutch courage in a couple of shots of whiskey before taking his post at the front door. It was also a lesson in history that he wasn't too familiar with himself — that Irish immigrants were frequently maligned by Americans for being dirty, dishonest and drunk. After a crash course in anti-Irish statements pulled directly from period newspapers and posters, Johns began to draw attention to the No Irish Pub by calling out offers of "$2 shots of Jack Daniels' American whiskey," to emphasize a preference for American over Irish whiskey. When potential customers tried to enter the pub, Johns would turn them away, saying, "This is an elite establishment, we don't associate with lower class citizens," or "Why would you want to associate yourself with a simian race?"

For people who were particularly confused, and even hurt, by their engagement with Johns at the door of the pub, he provided a flyer that explained the experiment.

"I made one girl cry," says Johns, "and that didn't feel real good. Her friends said I was a horrible person. But there were a lot of people who came back twenty minutes later and said quietly, 'I love the message, this is awesome.'"

No Irish Pub from Atlas Industries on Vimeo.

Margulis particularly wanted to highlight that the Irish were not always welcome in America.

"The goal was to target people of white European descent, because I think that if you're in America and you're brown, you might be a little closer to the immigration experience now," he says. "We wanted to get people who don't feel personally attached to the cause of the dreamers and say, 'If you just rewind history a little bit, this was your family's story, too.' The holiday is about frivolity and celebration but also provided an opportunity for depth and introspection."

For Johns, one of the most difficult moments of the day came when an older man came to the door, dressed in green from head to toe. "I asked him if he was Irish," recalls Johns, "and he said in a full Irish accent that he was 100 percent Irish. So I said, 'Then go back to Ireland, nobody wants you here.' He was looking at the signs in the window with a lot of confusion and then he just put his head down and walked away. I felt so bad, I got off the stool and tried to catch up with him to give him one of the flyers explaining what we were doing, but he kept walking too fast. That was really hard, to see how it affected him."

When Johns told one young woman with a group of Irish friends that she couldn't enter the pub because she was wearing green, she actually removed her green socks and other accessories so she could go inside, leaving her Irish companions to wait for her on the sidewalk. Once inside, she found out that there was actually no bar or even American whiskey, but still hung out with the production crew and took some pictures.

Since the video of the No Irish Pub was released on St. Patrick's Day, Margulis has been flooded with comments from people with opinions on both sides of the issue. "I feel like it's allowed people to reconnect to something that they haven't thought about for a while," he says. "The way their ancestors suffered becomes a point of pride, so we're getting people who are sharing stories — not just Irish, but Germans, Italians and others. It's about starting a conversation."