Accessibility links
Taste Buds Dull As People Gain Weight. Now Scientists Think They Know Why : The Salt Doctors have known that as people pack on the pounds, their sense of taste diminishes. New research in mice helps explain what's going on: Inflammation brought on by obesity may be killing taste buds. 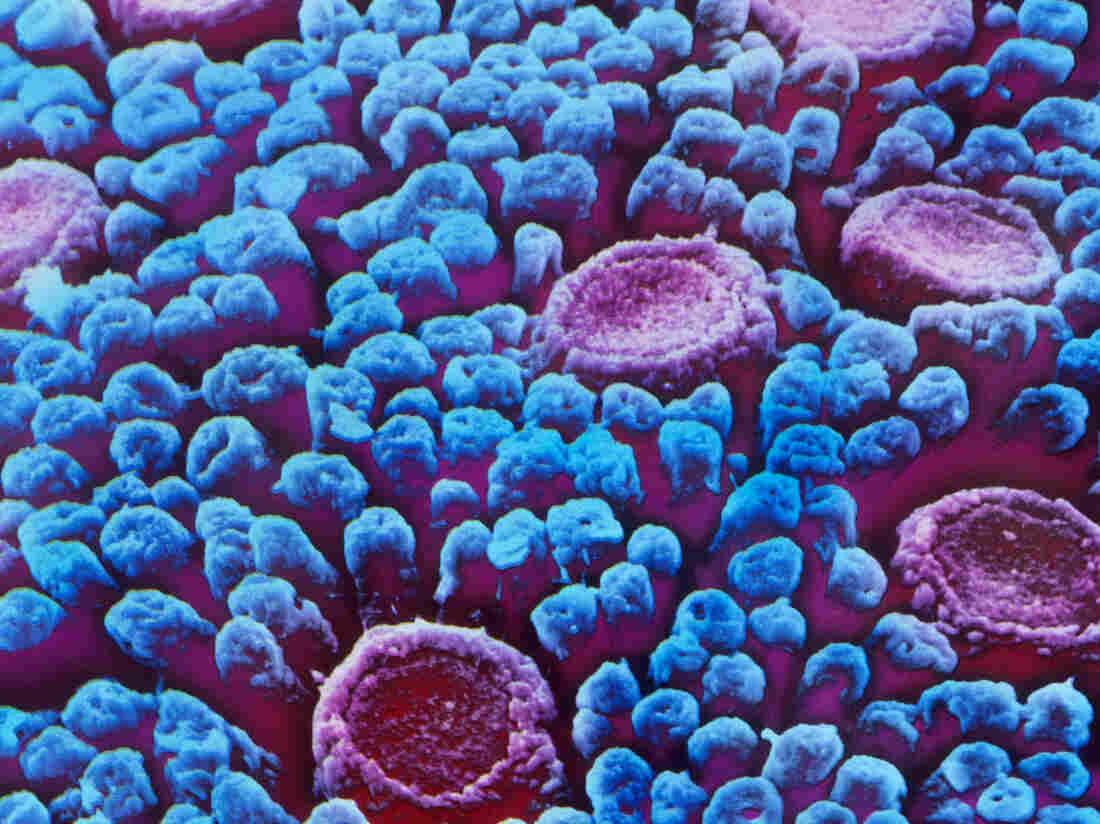 A color-enhanced scanning electron micrograph of the surface of the human tongue. Taste buds are shown in purple. Doctors have known that as people pack on the pounds, their sense of taste diminishes. New research in mice suggests one reason why: Inflammation brought on by obesity may be killing taste buds. Omikron Omikron/Getty Images/Science Source hide caption 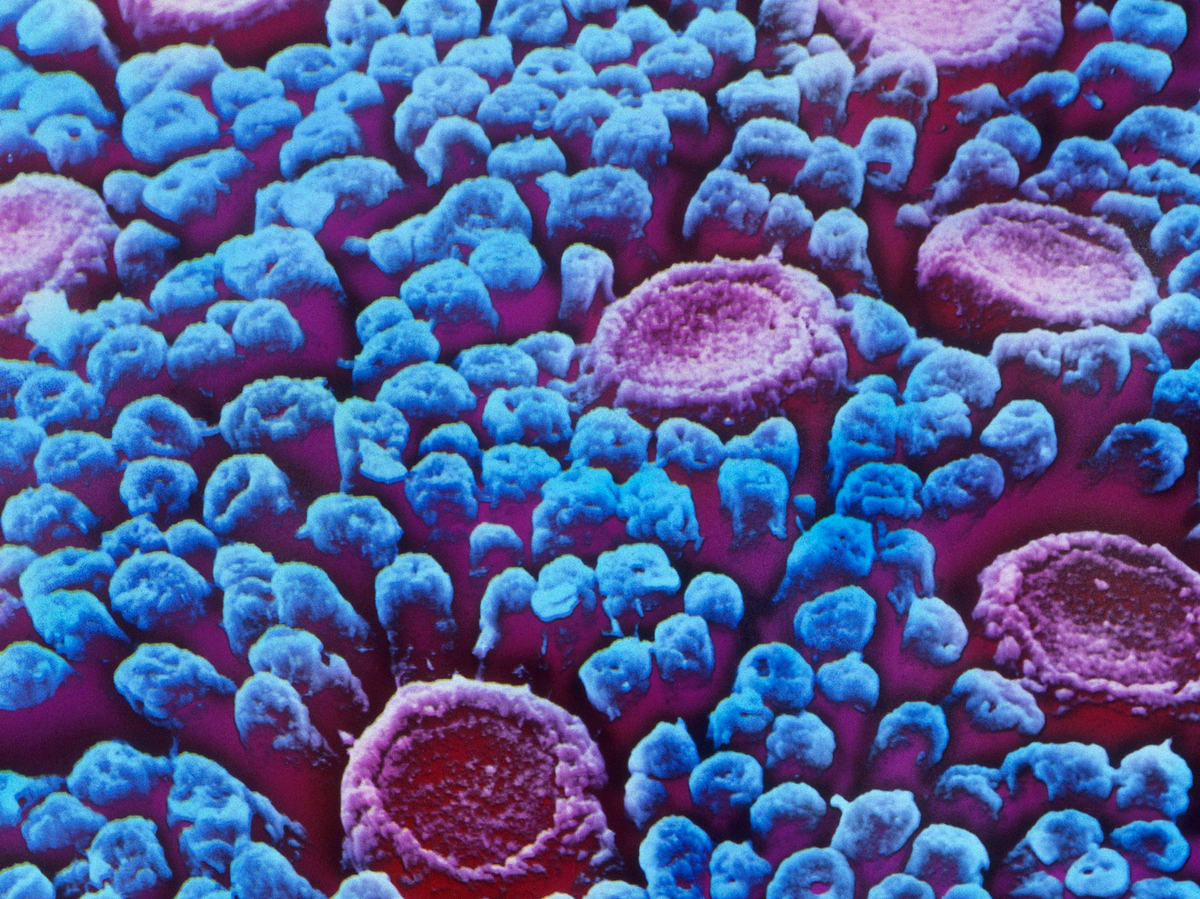 A color-enhanced scanning electron micrograph of the surface of the human tongue. Taste buds are shown in purple. Doctors have known that as people pack on the pounds, their sense of taste diminishes. New research in mice suggests one reason why: Inflammation brought on by obesity may be killing taste buds.

In Robin Dando's lab, several mice chowed down on a specialized diet designed to make them as fat as possible. "I can say the mice are happy. They love this unhealthy diet, and pretty fast they get pretty overweight," says Dando, an assistant professor of food science at Cornell University.

But the mice were not long for this world. Eight weeks after they started their delicious nosh, they were euthanized and their tongues were excised for direct comparison against their skinnier brethren.

Dando's work, which he and his graduate students Andrew Kaufman and Ezen Choo published Tuesday in PLoS Biology, attacks a curious effect of being obese: why people's sense of taste seems to dull as they gain weight. Doctors have known about the phenomenon for the last few years, after reports published in the last decade showed that obese people performed poorly on taste tests compared with normal weight individuals.

But the fundamental question remained: why? "We didn't have a good grip on cause and effect," Dando says. For instance, was it that a habit of eating heavy foods dulled the tongue's sensitivity to flavors? Or did this have something to do with the mere presence of excess body fat?

To find out, Dando looked at the tongues of his fat and normal-weight mice. Under the fatty diet, he found the taste buds were withering. "The obese ones have about 25 percent fewer taste buds," he says. Taste buds are structures on the tongue made up of about 100 cells and, when the mice got fat, Dando says the older cells were dying off more quickly and being replaced with new, young cells more slowly.

The team had two other groups of mice in the experiment. One was a set of mutants that were practically incapable of gaining weight no matter how fatty their food. "It's a genetically engineered mouse that's obesity resistant," Dando says. These mice got the same fatty food as the regular obese mice but didn't gain much weight. At the end of eight weeks, Dando and his students sliced out the mice's tongues. "We looked at their taste buds, and they looked totally normal. They [had] the same number of taste buds as lean mice," he says. That suggested the diet itself wasn't responsible for the damage to the mice's taste buds – it had something to do with being obese.

So Dando looked at one more group of mice – a bunch of mutants that can't produce a molecule called TNF alpha, a compound that creates inflammation in the body. TNF alpha and other compounds that create inflammation are naturally higher in obese individuals – both humans and mice -- and cause them to have a higher background levels of inflammation. Even when these mice became very fat, they also didn't lose any taste buds. "[It means] taste bud loss is really related to that inflammatory state," Dando says.

That's a key finding, says Dr. John Morton, the chief of bariatric medicine at Stanford University, who was not involved in the new study. "We've known for a long time that obesity is a disease of inflammation," he says. "Before this study, we didn't know that there is a connection between inflammation and the proliferation of taste buds, and that actually leads to the decrease in taste sensitivity."

It's important to note that this study was done in mere mice, but Morton says that the situation is likely the same for human beings, too. "In this particular circumstance, it's reasonable to make that extrapolation [to humans.] We've done human studies that have similar findings," he says.

That blunting of taste may make it more difficult for obese individuals to adhere to certain diets, Morton says. With a diminished sense of taste, people need stronger, more richly flavored food in order to enjoy it as much as someone with 25 percent more taste buds. "Often that means more sugar and fat," Morton says. "And more calories."

It's not a permanent loss, though. Studies on bariatric surgery patients show that they start noticing food tastes better and more intense a couple of months after their operation. "This is a two-way mechanism. Probably the opposite happens," Dando says. Taste buds do come back.

That leaves some hope for obese individuals who feel many foods are just too bland, now that Dando's work has narrowed down some potential causes of taste decline from weight gain. "If I were a pharmacist looking for drug development, I would look for a way to block this inflammation in the hope of mitigating this effect from weight," Morton says. A drug like that just might help some people regain gustatory mojo.