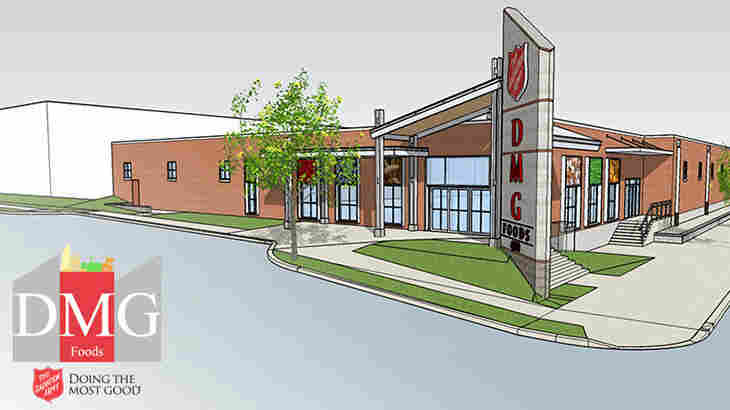 DMG Foods, the Salvation Army's first supermarket, offers discount groceries to nutritional assistance beneficiaries and anyone else who walks through the door. dmgfoods.org hide caption 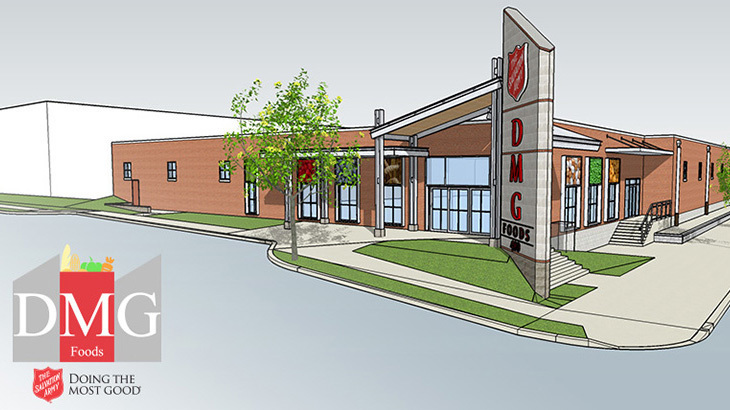 DMG Foods, the Salvation Army's first supermarket, offers discount groceries to nutritional assistance beneficiaries and anyone else who walks through the door.

Nearly a quarter of the residents of Baltimore lack adequate access to healthy food. For many, the nearest grocery stores are minimarts with limited produce. And lower incomes affect the ability of people to afford healthier food, according to a study by Johns Hopkins that looked at the regions of the city where the need for more healthy food options is the greatest.

While hunger and access to good food is not a new problem for the city, a longtime religious charity is trying something new to tackle it: The Salvation Army recently opened its first nonprofit supermarket in the country in East Baltimore.

Pollard looks around and seems impressed. "So far, so good. It's clean place," he says.

The 7,000-square-foot space looks like your average supermarket. The couple admires the stacks of fresh-looking asparagus, juicy Gala apples and a variety of lettuce. Lawrence clutches a paper with the store's weekly deal.

"I see a couple of deals already," he says, "especially on the fruits and the salads."

Now, many supermarkets brag about having the lowest prices, but we checked. The milk, eggs, butter and canned tuna at DMG are 50 cents to $3 cheaper than at the nearest chain grocery.

While the store caters to beneficiaries of the Supplemental Nutrition Assistance Program, Maj. Gene Hogg, the Salvation Army's central Maryland commander, says anyone can shop here.

"Our business is not really selling food," he says. "What we're in the business of doing is helping and loving people. And the qualifications to shop here is to walk in the door."

The Salvation Army decided to go into the food business because, Hogg says, it found a niche where many chain supermarkets stores could not survive.

Hogg says the organization did research around what it could do to "sustain a community, rather than entering into it on an as-need basis."

The DMG store has some help making products available to its customers. Some of the nonperishable food is donated by the Maryland Food Bank, while produce is bought from a large distributor that sells it to DMG at a steep discount. Since the store opened a couple of weeks ago, Hogg says, business so far is good.

He says the goal is to get to 300 customers in one day. To entice more customers each week, the store offers free items for SNAP beneficiaries. This week, it is giving away 10-pound bags of frozen chicken.

The store is an experiment. Hogg says if it makes enough money beyond expenses, proceeds can go to the Salvation Army's home for survivors of human trafficking. "So not only are you just shopping and meeting your needs for your household, but in the end you could be actually helping someone who could be rescued from human trafficking."

Over at the cash register, the Pollards are ready to check out. They leave the store clutching three full grocery bags. They've spent only about $17.

If the store is successful in attracting enough customers, Hogg says the Salvation Army may be able to expand to other parts of Baltimore. And if that works out, it hopes to open in more areas across the country.

The Salvation Army has high hopes that the Baltimore DMG store will succeed. Hogg says DMG is not just a motto — it's a promise.