Accessibility links
Is It Time For The Traditional Christian Easter Treat To Get A Makeover? : The Salt Hot cross buns have been an Easter treat for centuries. But before that, pagans exchanged them as part of a spring ritual celebrating the four seasons or the phases of the moon. Can they morph again?

Hot Agnostic Buns: A Proposal For A Pagan-Christian-Secular Easter Treat

Hot Agnostic Buns: A Proposal For A Pagan-Christian-Secular Easter Treat 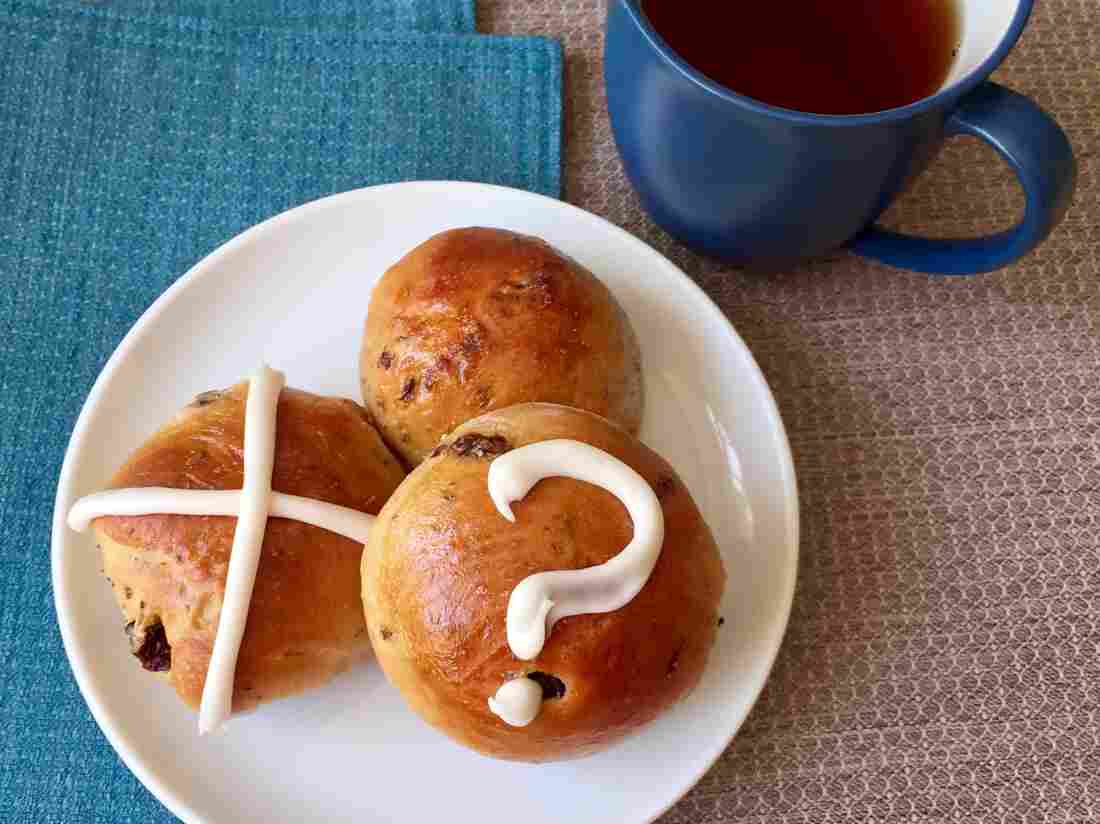 Decorating Easter buns with a variety of symbols is an inclusive way to share holiday food. Kim Vukovich hide caption Decorating Easter buns with a variety of symbols is an inclusive way to share holiday food.

It's no secret that Easter, a Christian holiday that celebrates the resurrection of Jesus Christ, has deep ties to ancient pagan rituals celebrating the renewal of spring.

And hot cross buns, the classic Easter treat, is a perfect example of how traditional foods can be repurposed to support new ideas and beliefs.

Traditional hot cross buns — a sweetly spiced bread, studded with dried fruit and decorated with a cross made of dough or icing — have historically been served on Good Friday. In 1592, Queen Elizabeth I decided that crossed buns would only be sold on Good Friday, Christmas and at burials. Whether her decree was due to superstition or politics, it eventually turned hot cross buns into the Good Friday treat we enjoy today.

But long before that, this popular Christian Easter treat got its start as a pagan spring custom.

Sing It Now: 'One A Penny, Two A Penny, Hot Cross Buns'

In her book Holiday Symbols And Customs, author Sue Ellen Thompson writes, "The pagans worshiped the goddess Eostre by serving tiny cakes, often decorated with a cross, at their annual spring festival. When archaeologists excavated the city of Herculaneum in southwestern Italy, which had been buried under volcanic ash and lava since 79 C.E., they found two small loaves, each with a cross on it, among the ruins."

Christians later adopted hot cross buns and repurposed the symbol, just like they did with other pagan springtime customs such as bunnies and eggs, which are tokens for fertility and birth. The cross is thought to have originally represented the phases of the moon or the four seasons. In the Christian tradition, it now symbolizes the crucifixion and resurrection of Jesus Christ.

The Key To Cracking Easter Feasts? It's All In The Eggs

Hot cross buns have enjoyed a centuries-long connection with the Easter holidays in many Christian countries.

But times may be changing. According to an extensive 2014 survey by the Pew Research Center, the percentage of Christians in the U.S. is falling, while the percentage of those who identify as "religiously unaffiliated" is rising. This change is taking place across all demographics. Regardless of age, race, sex and education level, Americans are increasingly moving away from Christianity in favor of identifying as atheist, agnostic or non-religious.

The Pew study also found that not only is the religiously unaffiliated group of people on the rise but that they're also growing more secular as they age. In the 2007 study, 25 percent of the non-religious participants called themselves atheists or agnostics, while the other 75 percent identified their religion as "nothing in particular" and reported varying degrees of the importance of religion in their lives. Seven years later, the survey found that the atheist and the agnostic portion of the non-religious group has grown to 31 percent.

So why not, in the spirit of inclusiveness, celebrate our changing religious landscape through our food? Hot cross buns morphed once, they could morph again.

Come Good Friday, all you need is a good recipe and a creative decorating technique to make your own hot agnostic buns. For your Christian relatives, there's the simple cross. For your agnostics, the question mark. Lastly, for the "black sheep" of the family — whether they are atheists or anti-sugar — just leave the buns plain.

Worst-case scenario: If your extended family loses its appetite over a little icing, at least you'll have a delicious breakfast treat all weekend long.

Kim Vukovich is a food and culture writer based in San José. Find her on Twitter @kim_vuk