Accessibility links
You May Live Longer By Severely Restricting Calories, Scientists Say : The Salt Scientists have long been fascinated with whether dramatically restricting the amount of food we eat can help us live longer. New research suggests it might, but the question is, is it worth it? 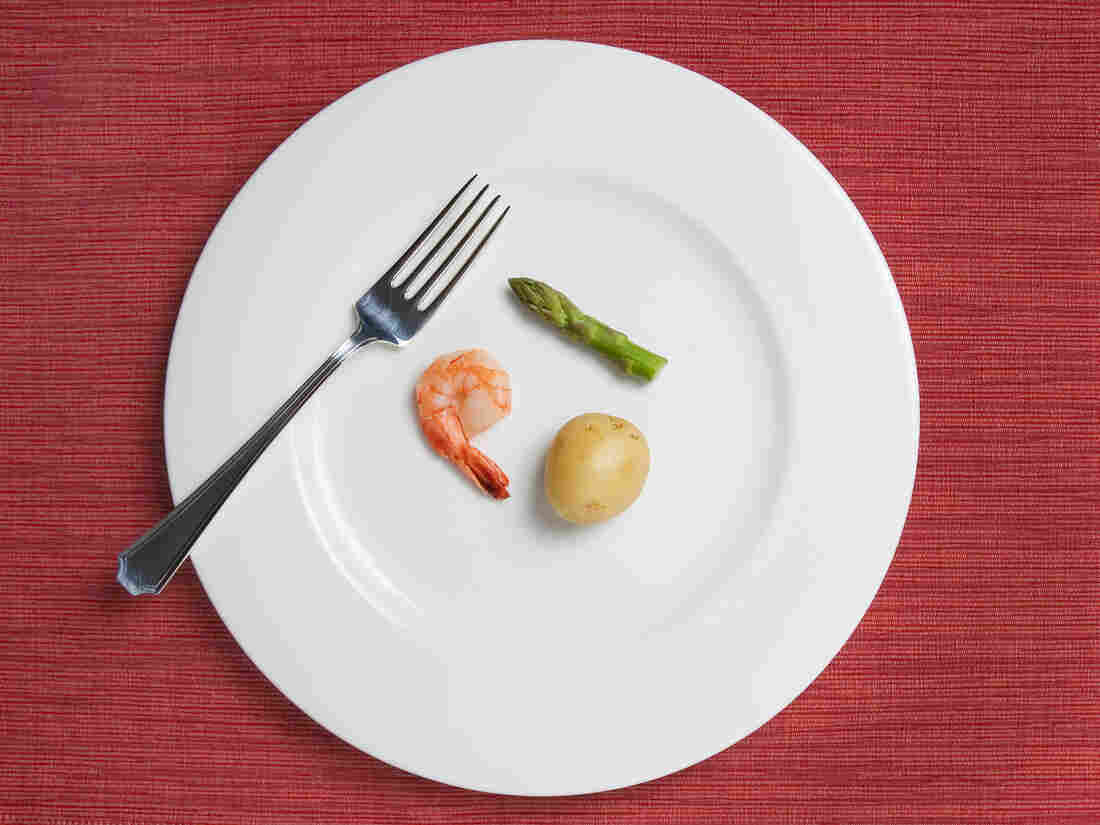 Cutting back up to 25 percent of your calories per day helps slow your metabolism and reduce free radicals that cause cell damage and aging. But would you want to? VisualField/Getty Images hide caption 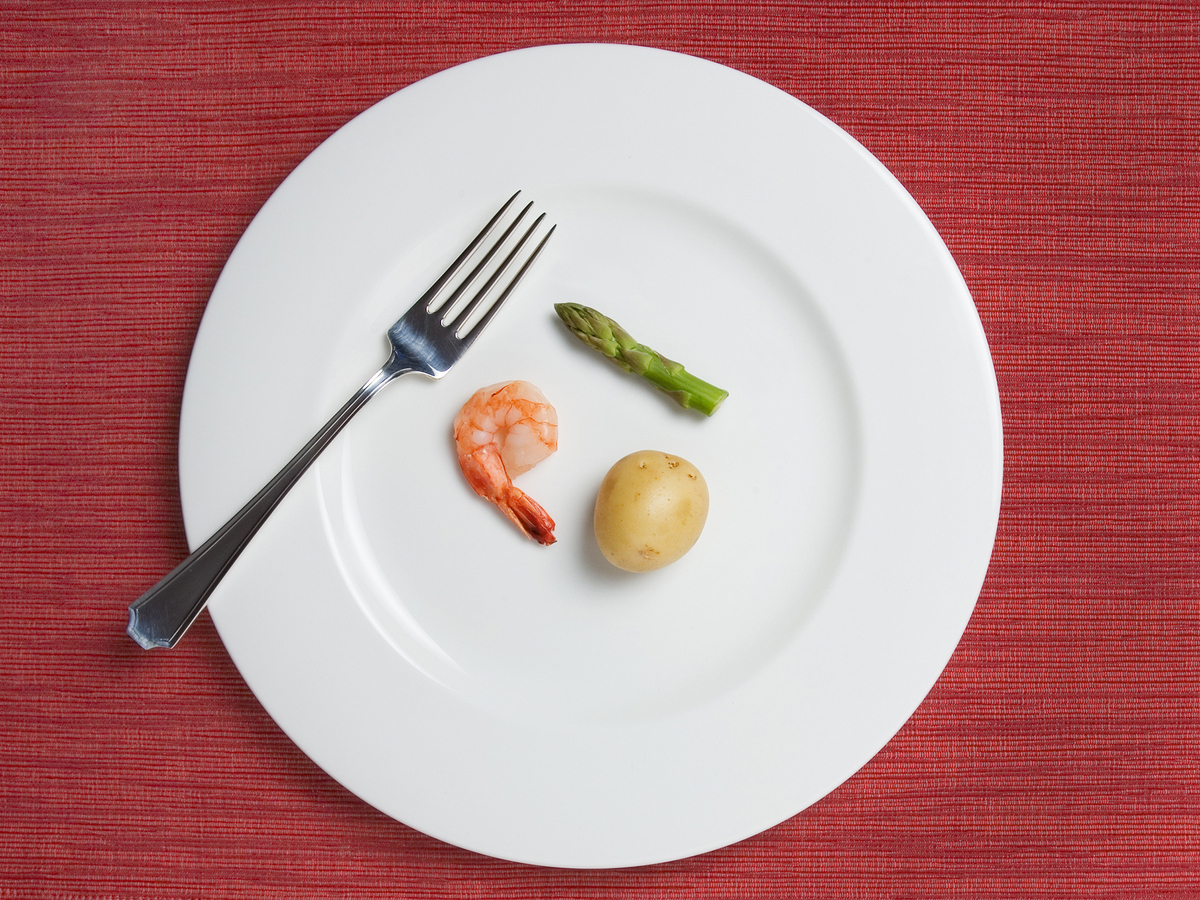 Cutting back up to 25 percent of your calories per day helps slow your metabolism and reduce free radicals that cause cell damage and aging. But would you want to?

Research has shown that sharp reductions in the amount of food consumed can help fish, rats and monkeys live longer. But there have been very few studies in humans.

Now, some researchers have found that when people severely cut calories, they can slow their metabolism and possibly the aging process.

Clinical physiologist Leanne Redman, who headed the study at Pennington Biomedical Research Center in Baton Rouge, says the first challenge was finding people willing to take part. After all, they would have to cut their typical plate for breakfast, lunch and dinner by up to 25 percent.

And, she says, none of them were overweight.

Ultimately, she recruited 53 healthy volunteers. One-third ate their regular meals. The rest were on the severe calorie reduction plan for two years.

"I don't know if you understand the rigor of what it means to do calorie restriction every day," she says, but the volunteers were committed.

Not surprisingly, the people cutting calories lost quite a bit of weight — on average, 25 pounds. Those in the control group gained as much as 4 pounds.

But weight loss was not the point. Redman wanted to know whether this dramatic reduction in calories could affect how quickly people age.

For testing, participants spent 24 hours in special rooms that measured their metabolic rates via gas, oxygen and carbon dioxide and how it changed over time.

Redman noticed that for those on the restricted diet, their metabolism slowed and became more efficient.

"Basically it just means that cells are needing less oxygen in order to generate the energy the body needs to survive; and so the body and the cells are becoming more energy efficient," Redman explains. And if less oxygen is needed to burn energy, then dangerous byproducts of that burning — free radicals — can be reduced.

"Oxygen can actually be damaging to tissues and cells, and so if the cells have become more efficient, then they've got less oxygen left over that can cause this damage," she says. And that damage can accelerate aging.

The study was published in the journal Cell Metabolism last month.

Now, these findings don't directly prove that drastic calorie-cutting will actually help people live longer. People would have to be followed for their lifetimes to prove that. But the study did find that blood pressure, cholesterol and triglycerides were lower in the group on severe calorie restriction. When those numbers are high, they can lead to life-shortening diseases.

The challenge is, most people may not be able to do a severe calorie-restricted diet, or even want to do it. Lowering metabolism can cause other problems.

Biochemist Valter Longo, who studies longevity at the University of Southern California, says severely restricting calories for a time can mean you're more likely to gain weight in the end.

"Basically, you have to eat progressively less to maintain the same weight."

Most Americans struggle with carrying around too much weight, which can cause countless health problems.

"For most people, if you consider 70 percent of Americans are either overweight or obese, then you can see how, for most people, this would be a big problem," Longo says. It could lead to more "yo-yo dieting," where people who go off the diet eat more and return to their previous weight or even gain more weight.

He is also concerned about the potential for muscle loss and a weakened immune system in those on severe calorie-restricted diets.

Instead of chronic calorie restriction, Longo is a proponent of mini-fasts. These are short reductions in calories to just 900 a day for five days a month, which he says have the benefits of fasting without the potentially negative long-term effects. In fact, he wrote the book on it: The Longevity Diet. Longo stresses the importance of eating more fruits and vegetables and less meat.

It may not ultimately lengthen your life, he says, but it can certainly help you maintain a healthy weight and avoid the kinds of chronic illnesses that can shorten it.

These practices are not for everyone. If you have a history of eating disorders check with your doctor before starting any new regimen.