Accessibility links
What Chinese Tariffs Targeting American Crops Will Mean For Farmers : The Salt Newly announced Chinese tariffs will raise prices on many U.S. crops. How will that affect American farmers? NPR's Mary Louise Kelley spoke with Jim Zion, a Californian nut distributor, to find out. 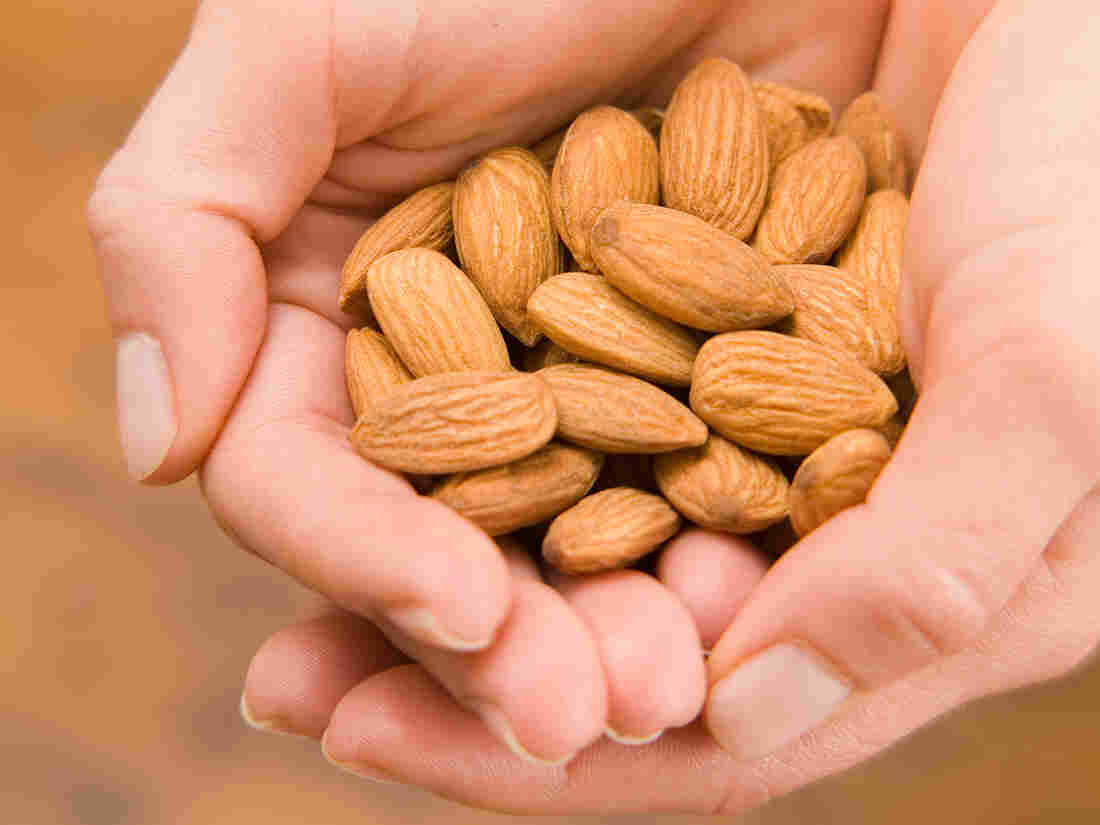 New Chinese tariffs will raise the price of many American crops, including almonds and other nuts. PM Images/Getty Images hide caption 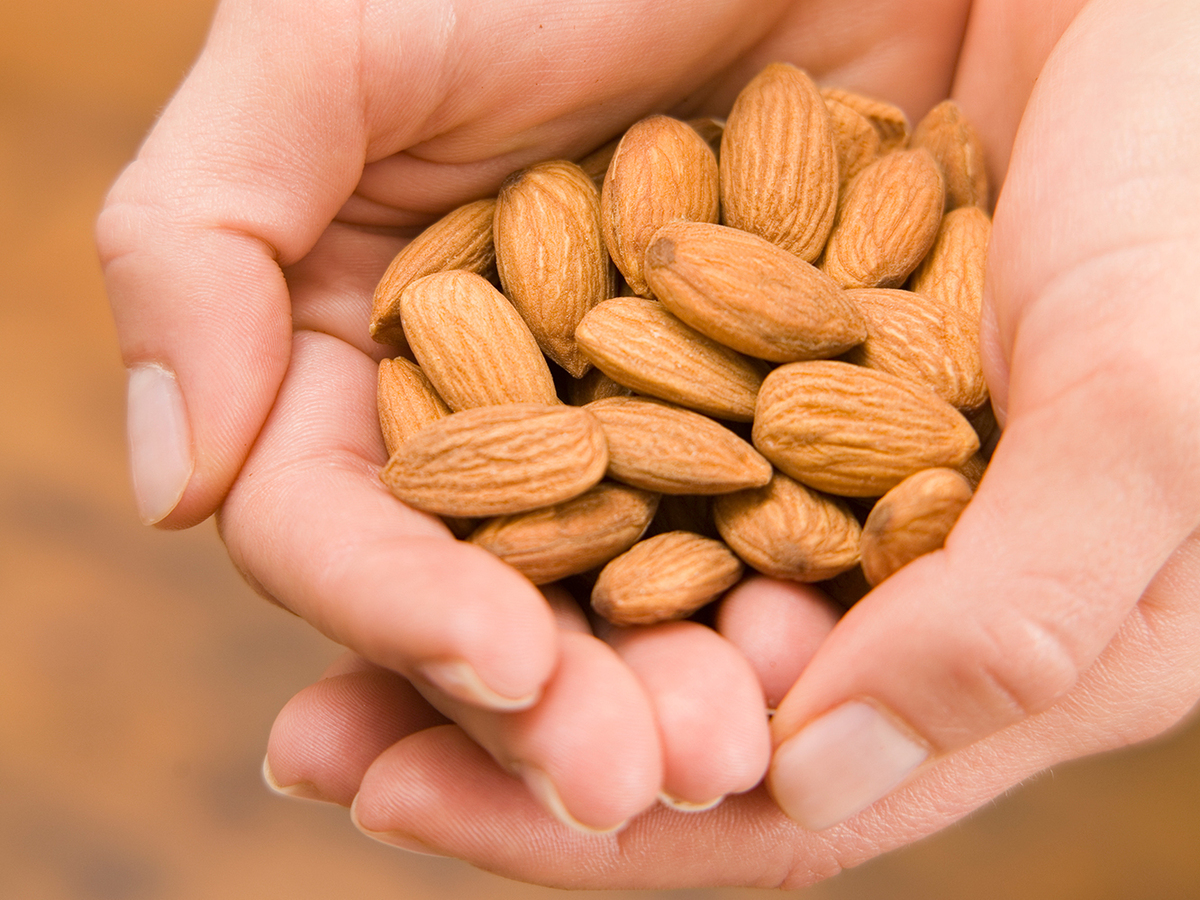 New Chinese tariffs will raise the price of many American crops, including almonds and other nuts.

Today, the Chinese government announced tariffs on 128 American products, including food. Pork will be taxed 25 percent, and wine, dried fruit, and nuts are now subject to a 15 percent duty.

The announcement comes in response to the tariffs President Trump recently imposed on steel and aluminum. Trade officials from each country are negotiating, and it's not yet clear how long the duties will be in effect, or what the lasting impact will be for American producers and growers.

But for businesses who already have shipments in transit, there are immediate effects. NPR's Mary Louise Kelly spoke with someone whose business is already feeling the tariffs directly. Jim Zion, managing partner at Meridian Growers in Fresno, Calif., distributes almonds, pistachios, and pecans to markets like China.

Questions and answers have been edited for length and clarity.

How many nuts does California sell to China?

In any given year, California exports anywhere between 60 to 70 percent of its almonds, pistachios, and walnuts. Arizona exports about the same amount of its pistachios and pecans. China has been one of the largest markets for the last few years. At one time, one out of every four pistachios grown in California was destined for China.

How big a deal will this 15 percent tariff be for your business?

For anything that we were shipping, that's what we call "on the water" — in transit to China — we will have to ask our buyers how they would like to handle the additional cost, because obviously this wasn't factored in when we made the original contract.

Either we're going to have to give them a discount to cover this additional cost, or, if we can't come up with an agreement, we will divert those containers to another destination that doesn't have a tariff. If we can't do that, we'll have to bring them back. Regardless, this will definitely cost us some money out of our pocket to take care of these issues.

Do you have an estimate for how much money this will cost?

And if we have to bring it back, anytime we bring a container back to the United States, by the time we bring it back and go through customs and everything, that additional cost could be $10,000. So out of pocket this could cost us anywhere from $5,000 to $25,000 per container.

And you're describing not just an economic cost but a bureaucratic hassle, having to renegotiate deals you thought were done.

Exactly. We've been doing business with many of our customers for many years, so we'll be able to work through this, but this is something that neither one of us wants.

We're being optimistic that this will not last forever, and at some point a settlement on this trade dispute will be negotiated, so we can get back to doing business, which is what all of us want to do anyway.

You work with growers across California's Central Valley — what are you hearing from them?

They're concerned. We were concerned when we found out about the steel and aluminum tariffs.

Typically, in trade disputes, the first round hits what I call specialty crops — dried fruits and nuts is what affects us — they tend to be easy targets. We tend to be the first victims in any type of trade dispute, and once again, that's proven to be correct.

You're saying, pardon the pun, but you're low-hanging fruit.

Exactly, we are considered a nonessential low-hanging fruit. And we kind of knew this was coming — we were hoping it wasn't, but there's not a lot we can do about it.

To what extent, in your view, are politics part of this? There's been a lot of talk that perhaps these tariffs are designed to hit at areas of the country that have been home to a lot of Trump supporters.

Politics play a huge part in it. If you look at the Central Valley, it tends to vote Republican, and it's home to some of the largest production of almonds and pistachios in the United States. So it's no coincidence that they hit dried fruits and nuts.

I wonder what you might say if you could lean down and whisper in the president's ear?

We plant these trees, and these trees will last 25 years — pistachios will last hundreds of years — so we need long-term stability in these marketplaces.

I understand you're also working the phone to China today. What are you hearing from your contacts there?

They knew it was coming, they were hoping it wasn't going to happen, and at this point we're trying to wait and find out — is this really going to stick, or is it going to be 24, 48, 72 hours and they go "OK, we negotiated a settlement?"

Honestly, the next 24 hours is going to be critical. We actually have containers arriving in Asia within the next seven days, so I've gotta make some decisions.

And the decision you have to make in the next 24 hours is whether or not to divert that shipment and send them somewhere else?

Divert, renegotiate the contract, or bring back, those are the decisions I have to make.

If China doesn't get almonds and pistachios and pecans from the U.S., where would they get them from?

Well, pistachios are grown in Iran, and they will probably pick up their needs from Iran. Australia has been planting a lot of almonds lately, with the worldwide demand. And pecans, you can get pecans from South Africa and Australia.

So the bottom line is our customers do have alternatives. They would prefer buying from California, but if the costs are too high or too restrictive, they can switch to another producing country.

Menaka Wilhelm and Sam Gringlas contributed to this report.