Accessibility links
Food, Housing Insecurity May Be Keeping College Students From Graduating : The Salt A new survey finds that many students at universities and community colleges are struggling to pay for basic needs — and that's hampering their ability to learn and complete their degrees. 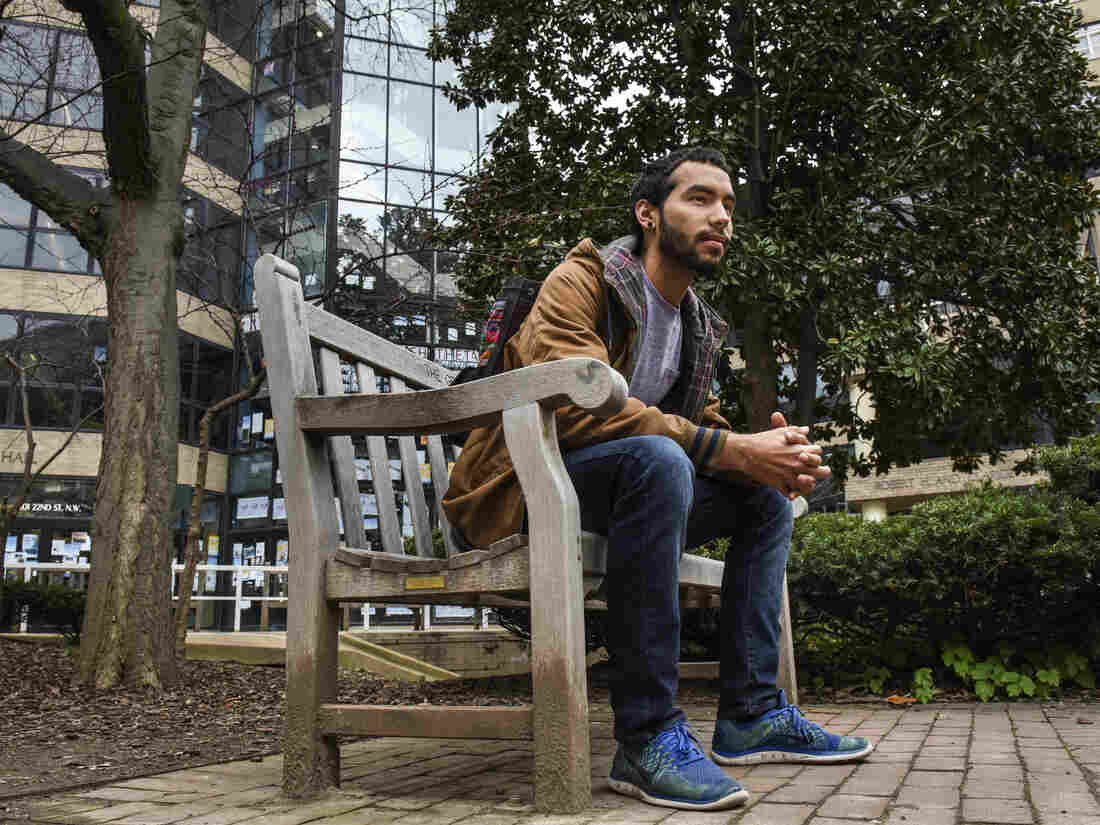 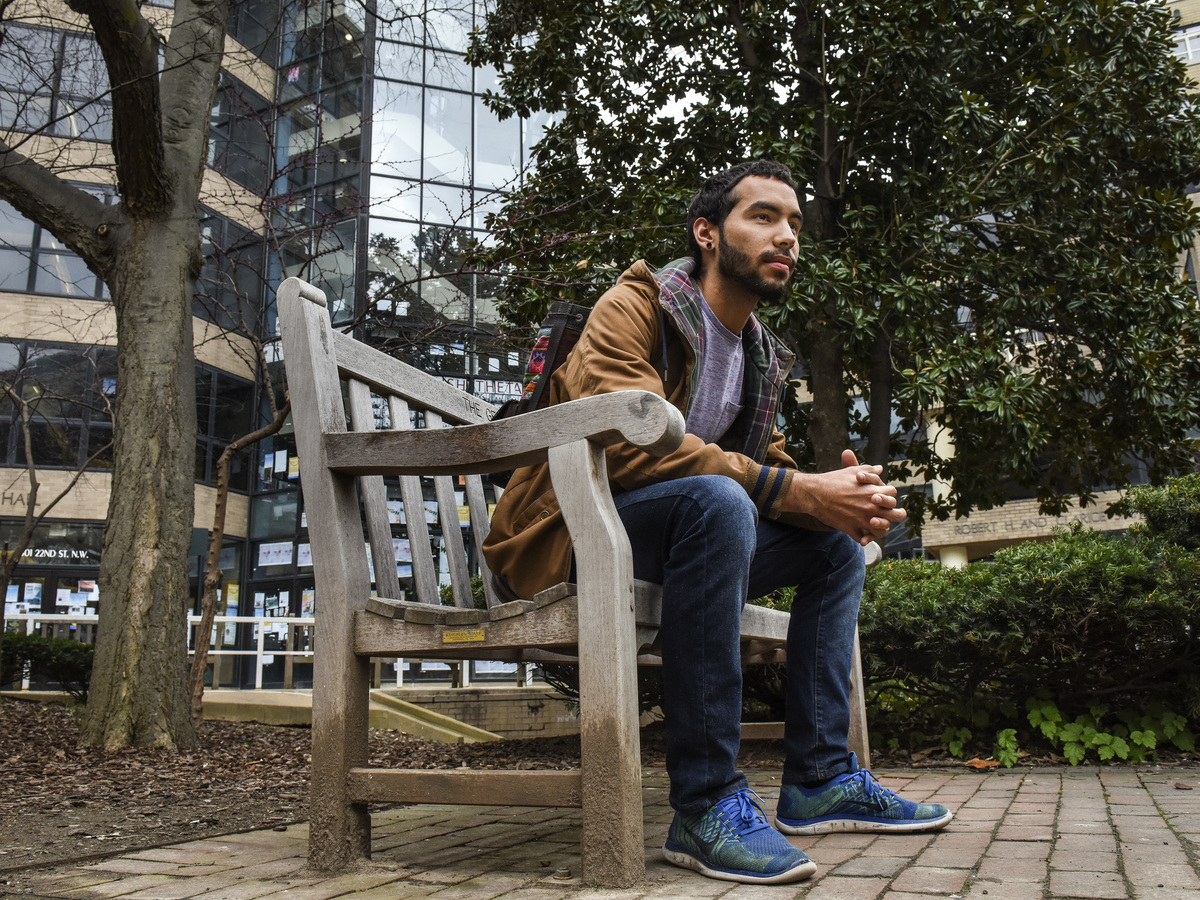 Caleb Torres, a senior at George Washington University, says he ran out of grocery money his freshmen year, so he began skipping meals.

In college, it's hard to learn while you're hungry.

That's a message Temple University higher education policy professor Sara Goldrick-Rab has been getting throughout her career.

She self-identifies as a "scholar activist." She has advocated for free college, and in 2013 she founded the Wisconsin HOPE Lab, which aims to turn research about low-income students into policies that improve equitable outcomes in post-secondary education.

On Tuesday, the HOPE lab released a new report based on an online survey of more than 40,000 students at 66 community colleges and universities.

Among the findings: In the past 30 days, 36 percent of university students and 42 percent of community college students felt food insecure, which "means that students have trouble getting enough to eat on a daily basis," Goldrick-Rab says. "They may go without meals, they may lose weight and they may go without nutritious food."

She spoke with All Things Considered host Audie Cornish about the report, and the challenges ahead. Excerpts of their conversation are transcribed below, edited for length and clarity.

Because people volunteered to participate in this survey, it's a self-selecting group. Does it really represent what's going on in higher education right now?

There are no nationally representative studies available to look at these problems. The federal government is the only one who collects that sort of information on college students, and they don't ask a single question about food or housing insecurity. So the only way we can get information about this is by asking colleges' permission to survey their students. This is an area of research that receives almost no funding.

In our survey, we used the U.S. Department of Agriculture's standardized measure of food security with everybody all over the world. We asked college students the exact same set of questions. We asked them about things that have happened to them in the past 30 days, and the extent to which they agree with statements like: I have not had enough food to eat because of lack of money. I have lost weight because I have not eaten enough. I have skipped meals.

What's the effect on low-income students?

It really undermines their ability to do well in school. They try incredibly hard, when we look at how much time they spend in the classroom and studying. It's the same as for students who don't have these problems, but their grades suffer, their test scores appear to be lower, and overall their chances of graduating are slimmer. They can barely escape the conditions of poverty long enough to complete their degrees.

Would this matter if they were in school or not?

Part of what we're seeing here is people who appear to be pushed downward, who are struggling more, because they're also grappling with the high price of higher education. And some of them — including people who, frankly, look middle class — are now struggling with food or housing insecurity because their resources pale in comparison to those high college prices. So they really wouldn't be going through these issues if they weren't in college.

Many of the schools in the study are community colleges, and they are tasked with one thing: to educate. Are you saying that they need to do more, and why should they?

I'm not suggesting that colleges become social service agencies, but rather, in support of their main focus — which is to help students graduate — they may need to undertake partnerships and develop resources in conjunction with social service agencies. For example, in K-12 education we don't merely provide free public education. We also have a national school lunch program. We also work with housing authorities to provide subsidized housing to students. We also provide subsidized transportation, so that students can actually get to school. Most of those sorts of things are currently missing in higher education, and they're going to need to be brought to the table if we want people to graduate.

Aren't they missing because these are ostensibly adults that we're talking about? At a certain point, are we saying, "You need to provide for yourself"?

I think that's mostly right except for one thing. These days, college has become the new high school. It's very difficult to get into the workforce without first getting a degree. So I don't think it's a question of whether we're supporting a child or an adult, but rather whether we're supporting a hardworking, talented person who is trying to become economically sufficient.

Is the problem getting worse?

We really don't know if the problem is getting worse because no one is systematically collecting data on the same sorts of people at the same colleges over time. There is no good trend data.

But the conditions that are leading to these problems do appear to be hard, and harder perhaps than they've been in the prior decades. For example, families clearly don't have enough money to live on these days. The social safety net is not nearly as supportive as it used to be. And work is extremely hard to find, particularly good-paying work for part-time workers.

The complete results of the survey can be found here.

All Things Considered Producer Alyssa Edes contributed to this report.