Accessibility links
GMO Yeast Mimics Flavors Of Hops, But Will Craft Brewers Bite? : The Salt Some beer-brewing scientists have developed a genetically modified yeast that produces the same hoppy aromas and flavors beer drinkers like, without the hops. But some craft brewers are skeptical. 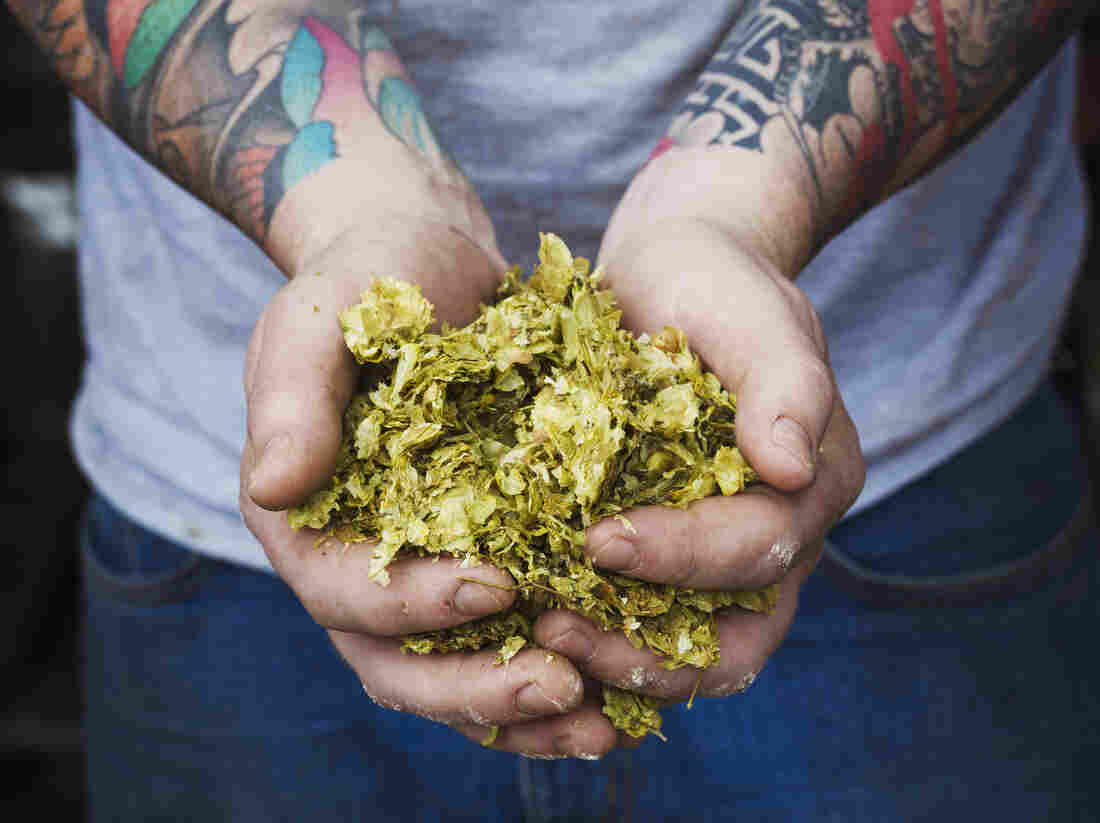 Some beer makers are excited about the possibility of using modified yeast to flavor beer instead of hops, which require a lot of water to grow. Mint Images/Getty Images/Mint Images RF hide caption 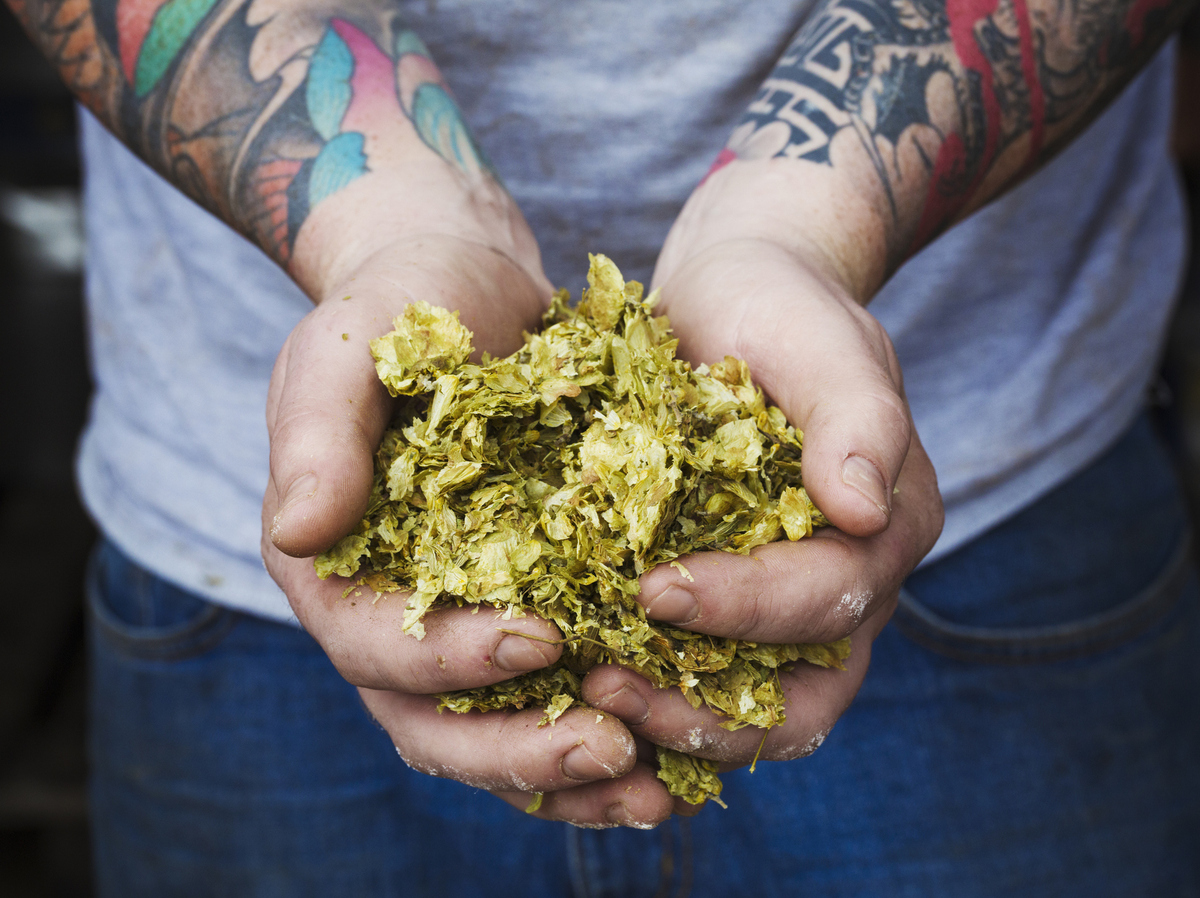 Some beer makers are excited about the possibility of using modified yeast to flavor beer instead of hops, which require a lot of water to grow.

Brewing beer, it is often said, is both an art and a science. New research, however, has some in the beer industry concerned that the science of brewing could be advancing too far.

A team of beer-brewing chemists and geneticists in California has created a genetically modified yeast that produces hoppy aromas and flavors without any interaction with the fragrant blossoms themselves. In other words, they've developed a way to make beer hoppy without using hops.

Brewer Matthew Brynildson feels the research, which was published March 20 in the journal Nature Communications, opens doors that he would just as well see remain closed.

"Craft brewing has always been a GMO-free art form — it was just assumed that we would never cross that line," says Brynildson, who has made beer at Firestone Walker Brewing Co. in central California for 17 years. "If we allow in GMO yeast, well, I could think of a hundred more things that I do or don't want my yeast to do."

Brynildson says he would rather the industry continue developing new yeast strains through the traditional means of selecting and isolating them "rather than asking a scientist to make one for us."

But some scientists are excited about the prospects for incorporating engineered yeast into the process of brewing.

Biochemist and hobbyist home brewer Charles Denby of the University of California, Berkeley, led the modified yeast project. He and his colleagues spliced DNA from mint and basil plants into the genes of brewing yeast. The primary job of yeast in making beer is to turn sugar into alcohol. However, in the process of fermentation, different yeast strains also create a wide range of flavors and aromas. As it turned out, the engineered yeast strain consistently created the grapefruit-like flavors typical of the Cascade hop, a highly valued variety widely grown in Washington, Oregon, and Idaho.

In fact, test batches of the beer — a classic American ale made using the genetically engineered yeast — tasted hoppier than the control beer during a blind tasting performed at Lagunitas Brewing Company in Petaluma, Calif.

"Beers produced using these strains are perceived as hoppier than traditionally hopped beers by a sensory panel in a double-blind tasting," the scientists say in their paper.

Denby, who spoke with The Salt via email, says he hopes the new yeast strain and perhaps others like it will eventually allow brewers to make better beer more consistently, and with less impact to the environment. Growing hops, after all, requires a lot of water and a great deal of space. The hops are also expensive to buy, and as consumer preferences lean increasingly toward hoppy beers, many hop varieties have become hard for brewers to find.

Moreover, the flavor profiles and bitterness levels in a given variety of hops can vary from year to year, which creates a challenge for recipe-oriented brewers hoping to replicate beers from batch to batch. For these reasons, a yeast that biosynthesizes the aromas of hops could be a boon to both the environment and brewers, the researchers conclude.

Brynildson is skeptical. He says he recognizes the environmental pressures of growing hops — especially the water demands — but he isn't convinced of the need to relieve the land of agricultural impacts.

"If someone said they had a yeast that made wine flavors, and then winemakers didn't have to use grapes anymore, that would be absurd," Brynildson says.

The craft beer industry is known as an incubator of creativity and innovation. However, even brewer Sam Calagione, whose use of unusual ingredients like masticated corn and live lobsters in his beers has made Dogfish Head Craft Brewery in Delaware one of the most successful beer producers in the country, is concerned about how genetic engineering might change the art of making beer.

"What does it mean for brewing if you can just buy the science to make whatever you want?" he says. "I'm all for innovation, but we're going to tread very slowly in this direction."

But John Gillooly is ready to make beer. He's the brewmaster at Drake's Brewing Co. in San Leandro, Calif., – just a few miles from Denby's lab. Gillooly says his brewery is already in discussions about using the new yeast with the scientists. His plan is to make an IPA without the Cascade hops that would otherwise be needed for their aromatic properties and offer it on tap to brewery customers. He promises to clearly label the beer as one made with a genetically modified organism.

In the longer term, Gillooly thinks the new yeast, if it becomes commercially available, will merely be used to complement existing brewing ingredients and practices.

"I don't see this ever replacing hops," he says. "My sense is we'll be coloring in with the hop flowers."

But Brynildson says seeing a genetically modified yeast become commercially available would make him uneasy, mainly because it would open a door into a new paradigm where the many challenges that brewers have traditionally faced in making good beer could be overcome through bioengineering.

"The next thing you know, we might be making beer with water, a drum of the cheapest sugar source you can find, and yeast that makes all the flavors that we used to get from barley and hops. That just wouldn't be fun anymore."

Denby, who says he hopes to create more flavor-producing yeast strains, says he isn't worried that genetic modification will negatively impact the industry.

"Our goal is to help brewers create beers that achieve similar flavors and profiles as you can get from conventionally grown hops while reducing the environmental impact of brewing beer," he says. "If anything, this adds to craft brewing. This is another tool brewers can use to make beer."