Accessibility links
U.S. Farmers Likely To Be Among Hardest Hit By Chinese Tariffs : The Salt China's retaliatory tariffs would hit farmers, who rely on exports to keep their business models going, harder than any other group, especially those raising hogs, nuts and fruit. 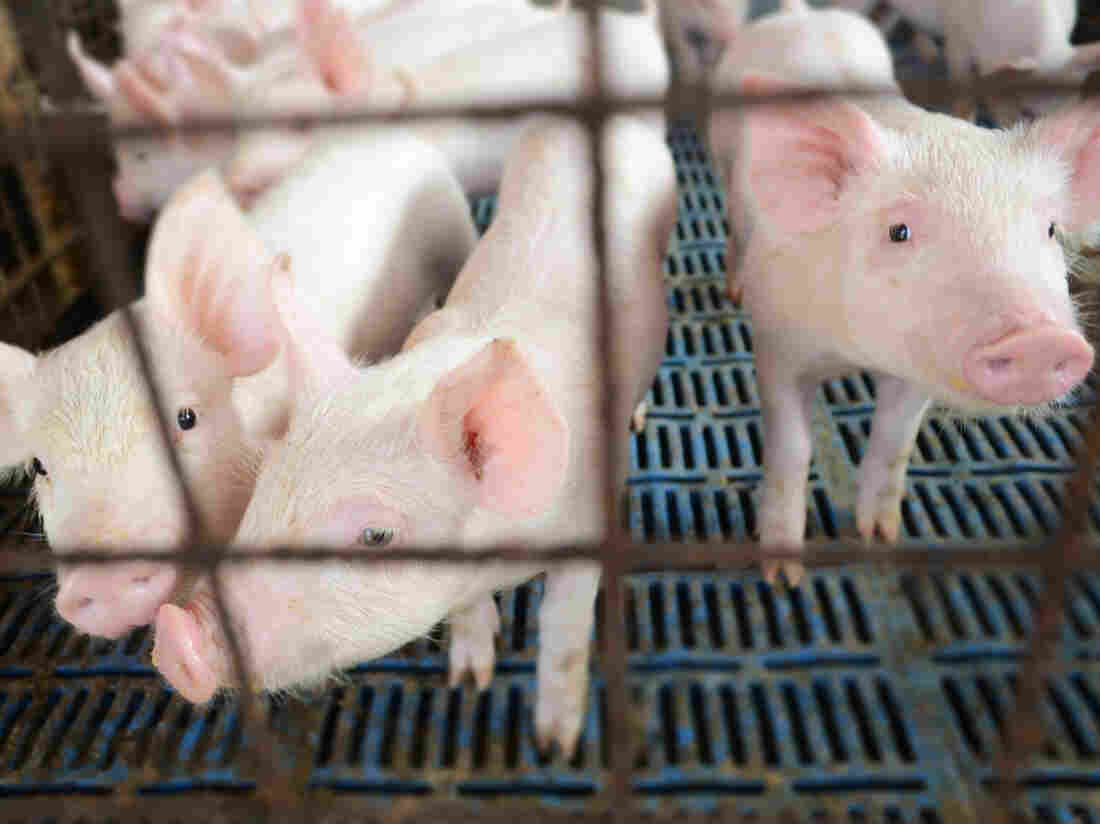 Hog farmers worry that they will pay a hefty price if there's a trade war with China. Red Cedicol/EyeEm/Getty Images hide caption

In response to the Trump administration's threats to place tariffs on $50 billion in Chinese goods, China has threatened to sanction $50 billion in U.S. exports, including airplanes, cars and chemicals. These tariffs would also target some of America's most successful exporters — farmers.

As the sun was coming up Wednesday, farmers at Betty's Truck Stop near Sweet Springs, Mo., took their coffee with a serving of bad news.

"Beans are down 50 cents overnight, and corn's down 14 [cents] because of this trade thing with China," says corn and soybean farmer Jim Bridges. He takes a seat at a large table in the center of the restaurant.

Bridges makes a few calculations and reckons his potential losses are about $50,000.

China has threatened to slap tariffs on some of the biggest U.S. crops: corn, soybeans, wheat, cotton and beef. But, Charles Tuckwiller, sitting next to Bridges in a worn jacket, says it's too early to accurately tally the losses.

"It could have an impact on us. Weather probably plays more of a role than that tariff is going to. We have always survived," says Tuckwiller with a sigh.

The farmers at this table are survivors. They've weathered downturns and massive consolidation in agriculture to become some of the world's most efficient producers. But their survival strategy depends on exports.

"Exports are very important to U.S. agriculture," says David Swenson, an economist at Iowa State University. "We produce significantly more than we can consume here in the United States, and farmers across the United States in all sectors of agriculture depend on exports to maintain price levels."

China has become the largest customer for America's farm products, buying well over $20 billion per year. China bought more than $1 billion in U.S. pork last year. But this week, it threatened a 25 percent tariff on that pork and 15 percent tariffs on a host of farm products grown across a wide swath of the country, including nuts.

Richard Matoian, executive director of American Pistachio Growers, says that 70 percent of U.S. pistachios go into the export market and that more than half of those go straight to China. China also buys a big chunk of the California almond crop, which will be hit hard by tariffs.

"We are generally free traders. We believe in open and free trade," says Matoian.

And that is a conviction shared by many U.S. farmers from coast to coast. Dr. Ron Prestage is a veterinarian in Camden, S.C., but he also runs Prestage Farms, one of the largest pork and poultry producers in the Unites States. Prestage Farms has been expanding, building a new pork packing plant in Iowa, but projected demand for pork has dropped since the tariff fight began.

"Do I enjoy being in the crosshairs and caught in the middle of this dispute?" Prestage asks rhetorically. "[T]he short answer is 'No.' But I understand it."

Prestage says American farmers and pork producers in particular are automatic targets in trade disputes because they are such strong competitors in the world market.

"And that's not by luck," says Prestage. "That's through a lot of hard work."

U.S. farm groups have worked long and hard to chip away at trade barriers, and some worry these tariff fights could upend decades of progress.

"Right now we're in a trade skirmish, but probably not in a war. But the concern is, that skirmish could escalate," says Christopher Hurt, a professor of agricultural economics at Purdue University in Indiana.

And a trade war with China isn't farmers' only worry. If President Trump follows through with threats to walk away from the North American Free Trade Agreement, U.S. farmers could be pinned down in a trade war on two very punishing fronts.