Accessibility links
You Might Be Eating Halal Meat And Not Even Know It : The Salt As the U.S. Muslim population grows, so does demand for meat from animals slaughtered according to Islamic law. But some grocers don't use the halal label because of fears of an Islamophobic backlash. 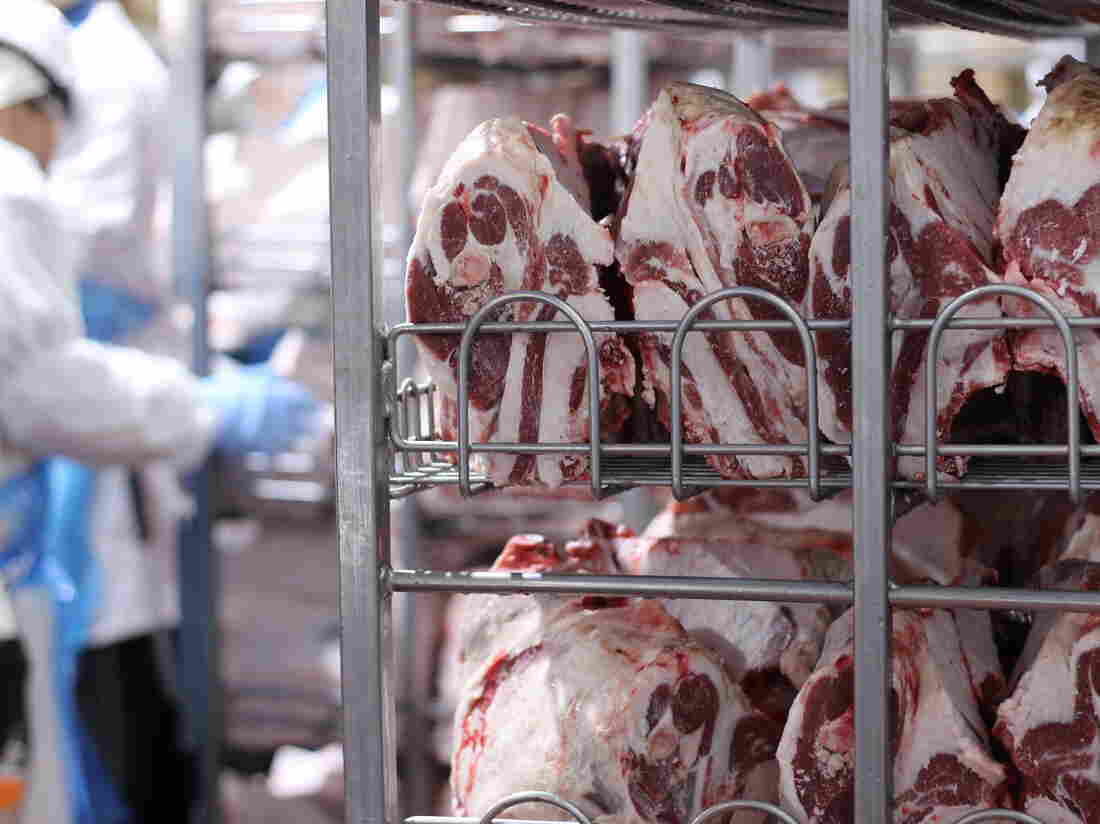 Cuts of halal lamb shoulder sit on a shelf at the Superior Farms plant in Denver, waiting to be sold to small specialty stores that cater to Muslim consumers. Esther Honig/Harvest Public Media hide caption 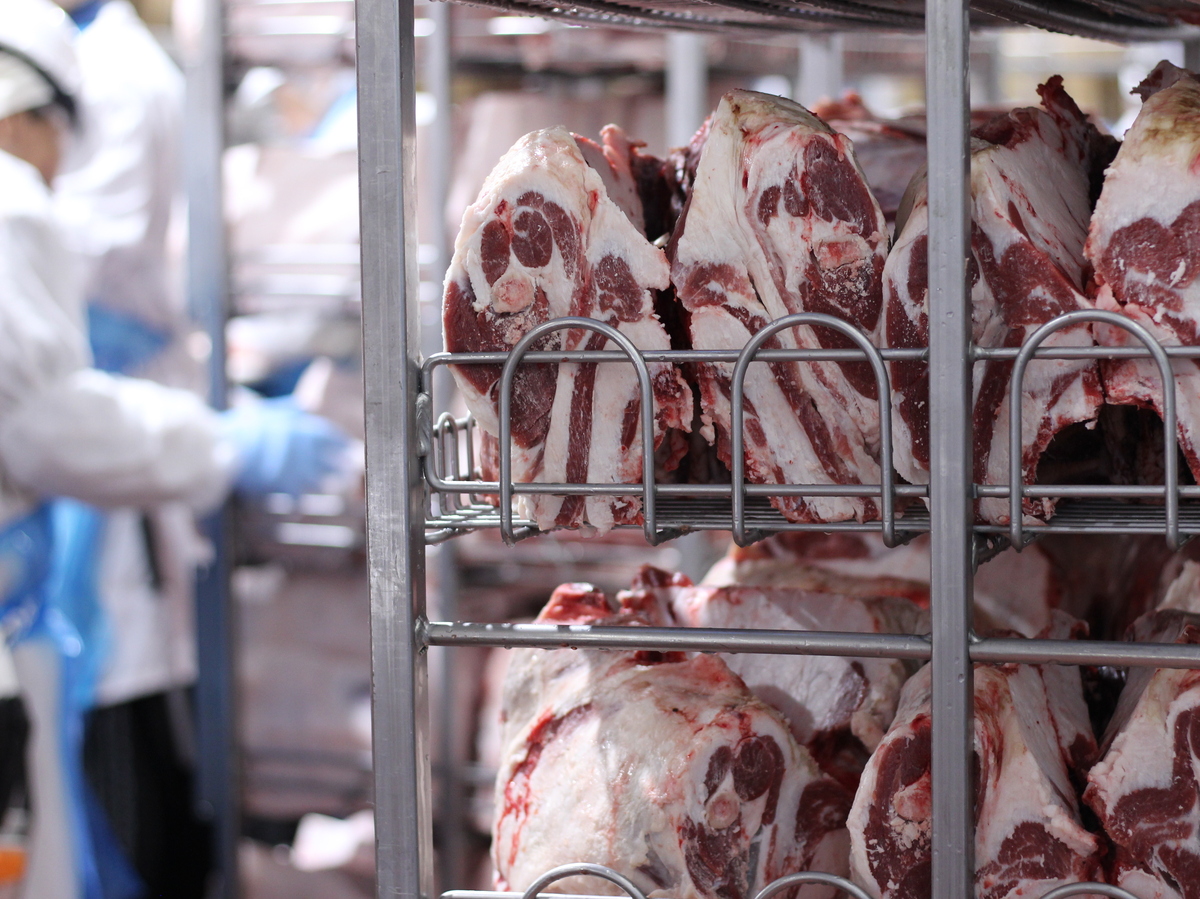 Cuts of halal lamb shoulder sit on a shelf at the Superior Farms plant in Denver, waiting to be sold to small specialty stores that cater to Muslim consumers.

Wearing a heavy smock and rubber boots, Amadedin Eganwa stands over a large conveyor belt that's carrying unconscious lambs. He faces east, toward Mecca, gently lifts the animal's head in the same direction and under his breath he quickly says a prayer — bismillahi allahu akbar, or "in God's name" — before swiftly cutting the lamb's throat.

Eganwa, a practicing Muslim, performs this slaughter almost 900 times during each shift at Superior Farms slaughterhouse in Denver so that the meat is halal, meaning it's prepared according to Islamic law.

With the Muslim population on pace to possibly become the second-largest religious group in the United States by 2040, the demand for halal meat and other foods is on the rise to the point that Nielsen reports U.S. sales increased 15 percent from 2012 to 2015. Some of the largest meat producers in the country — American Foods Group — are providing more that's halal (in part to satisfy global, not domestic, demand). But industry experts say U.S. consumers may not be aware of it, because some large grocery chains choose not to label products halal.

"The reality of it is some [retailers] are actually concerned about the halal insignia," Superior Farms' vice president of sales Greg Ahart said, adding that the lack of labeling generally happens at big retailers in areas where there aren't large Muslim populations.

Superior is one of the largest lamb producers in the country, selling to small ethnic grocery stores as well as retail giants.

Five years ago, the Denver plant and one in California slaughtered lamb according to halal standards just one day a week, Ahart said. As demand rose, Superior Farms, which mostly handles lamb with some goat, became all-halal, all the time.

Shane MacKenzie, who oversees Superior's operations and has worked with the company for 21 years, said halal slaughter doesn't slow anything down: "It's exactly the same except for the practicing Muslim [slaughterman]."

Every step in the company's process is approved by the federal Safe and Humane Slaughter Act, which every slaughterhouse must follow, as well as a certifying board, Halal Transactions of Omaha. Additionally, the plant is required to prevent any contamination by non-halal foods, such as pork, alcohol or the use of antibiotics, since they tend to contain pork byproducts.

There isn't a single governing body overseeing the certification of halal meats, and the standards can vary, which means there's little data on the industry. But according to Nielsen, recent sales for halal foods in the U.S. reached $1.9 billion, and Thomson Reuters has pegged the global market at about $415 billion.

"They may feel it's not necessary to mention that it's halal and, in some cases, they may fear a backlash," according to Latif, whose company is a leader in researching the U.S. halal market.

In 2016, Thomson Reuters and DinarStandard analyzed more than 50,000 social media posts by people 18 to 35 that mentioned the word "halal." They found 18 percent of posts had Islamophobic themes and were more likely to come from Europe, Australia and the United States.

The Rise Of Halal Cuisine In An Age Of Islamophobia

When it comes to serving halal, some retailers may be doing it, but don't trumpet that fact — at least in the United States. Customers pointed out on Twitter a few years ago that burger chain Shake Shack sources meat from known halal-certified supplier Creekstone Farms. But Shake Shack denied it on social media and its website says halal meat is only at its locations in the U.K. and Middle East.

So if Muslims can't look at a label, how do they know it's halal? Often, Latif said, they have to look at social media or websites that list certified halal manufacturers. But he thinks retailers eventually will put their fears aside as they see this market grow, treating halal like kosher, which is now mainstream.

"Once they do the back of the envelope calculations and they understand how many Muslim consumers they're living close to, they'll realize the huge benefit," he said.

As for Eganwa, the Muslim who has been performing halal slaughtering for about a year, he says he considers doing things according to his religious custom "a service to my people."

This story comes to us from Harvest Public Media, a reporting collaboration focused on food and agriculture. You can follow Esther Honig on Twitter: @estherhonig