Accessibility links
A Grass-Roots Movement For Healthy Soil Spreads Among Farmers : The Salt America's farmers are digging soil like never before. A movement for "regenerative agriculture" is dedicated to building healthier soil and could even lead to a new eco-label on food. 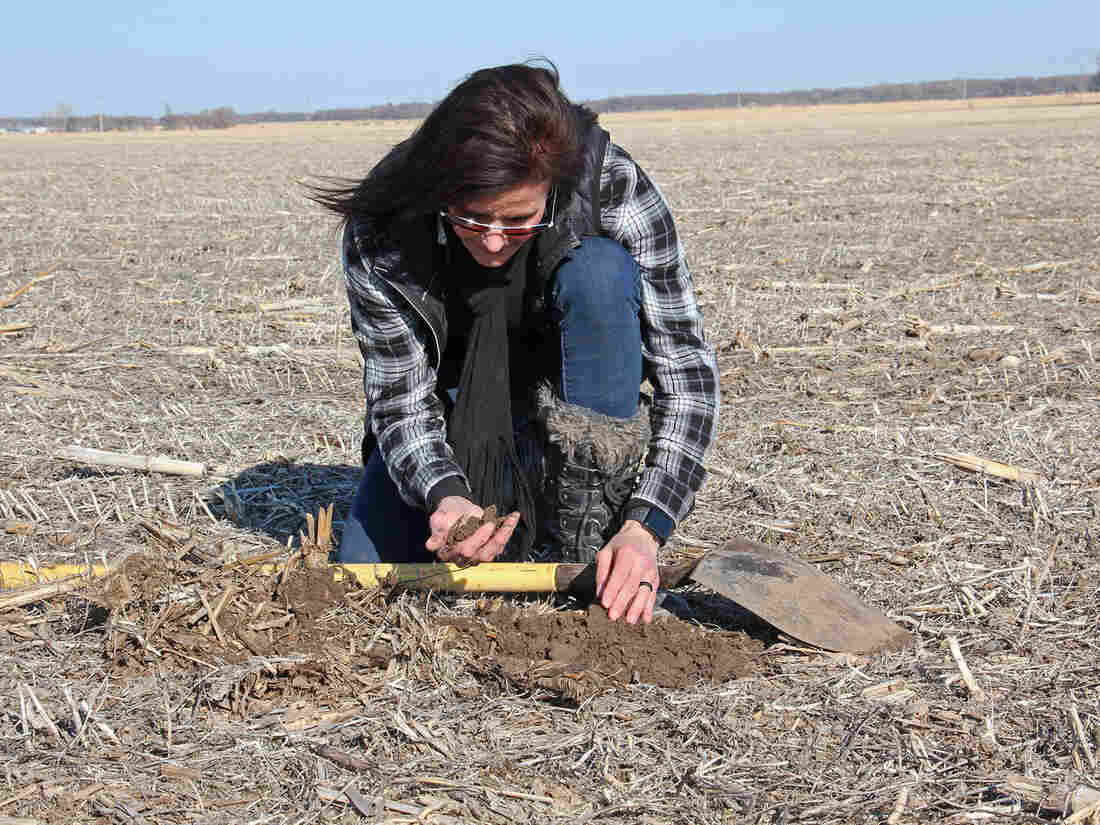 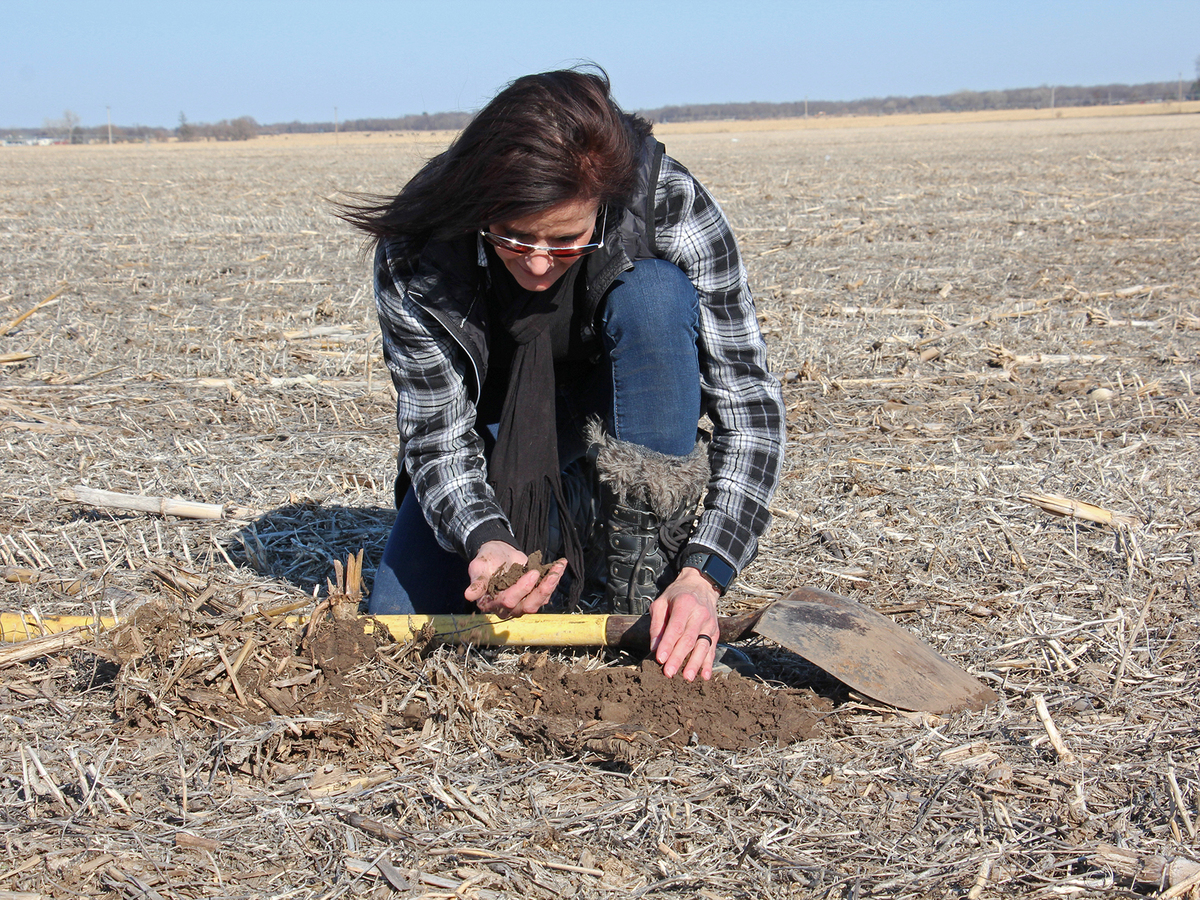 Deb Gangwish inspects soil on her farm near Shelton, Neb.

In American farm country, a grass-roots movement is spreading, a movement to keep more roots in the soil. (Not just grass roots, of course; roots of all kinds.) Its goal: Promoting healthy soil that's full of life.

I met three different farmers recently who are part of this movement in one way or another. Each of them took me to a field, dug up some dirt, and showed it off like a kind of hidden treasure.

"You can see how beautiful that soil [is]," said Deb Gangwish, in Shelton, Neb. "I'm not a soil scientist, but I love soil!"

"You can pick it up and it smells like dirt," Bryce Irlbeck told me, as we stood in a field near Manning, Iowa. "You can go on a lot of arms in Iowa and the dirt doesn't smell like dirt anymore."

And in Pleasant Dale, Neb., Del Ficke was practically ecstatic. "Look at this! And the smell! It smells beautiful! It's alive!" 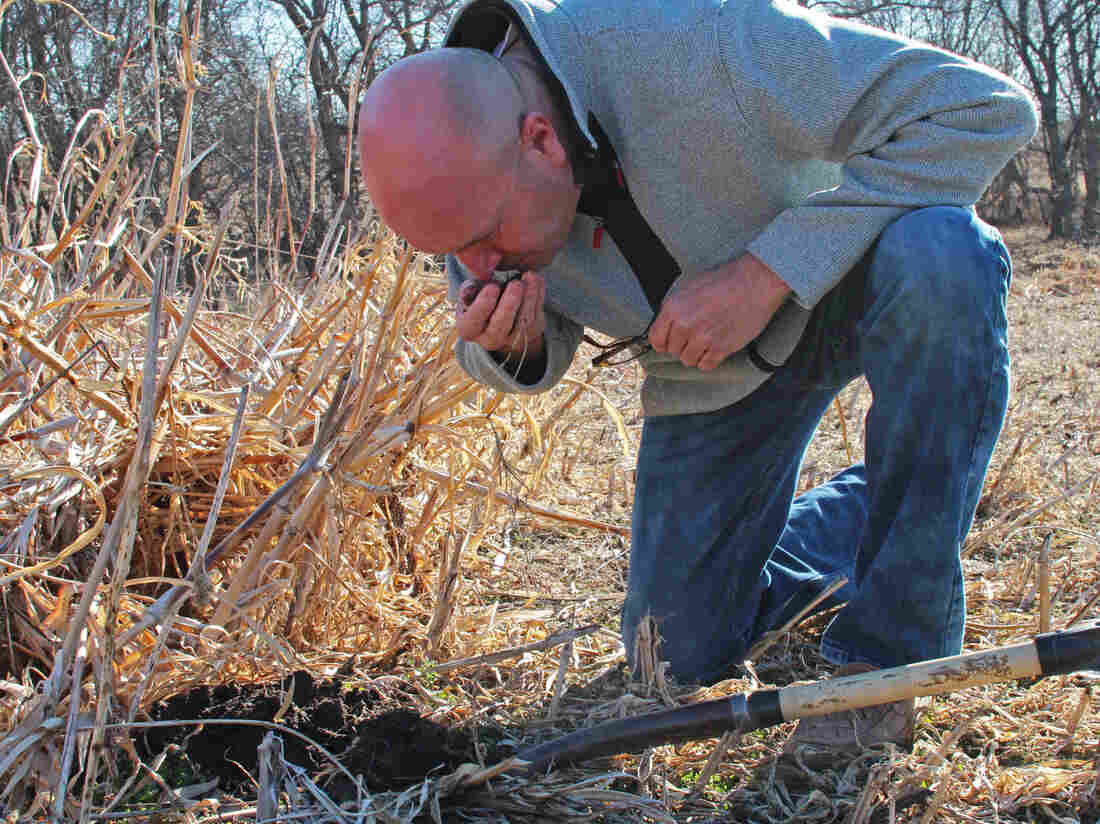 For Del Ficke, improving the soil is a spiritual quest.

For years, talk of "healthy soil" was mostly limited to organic farmers and others on the fringes of mainstream American agriculture. No more. Articles about soil health fill major farm publications. It's the subject of several recent books. Big food companies are on board, and some of them are discussing a new eco-label for food, alongside "organic" and "fair trade," that would reward farmers for adopting practices the build healthy soil — what many are calling "regenerative agriculture."

It's also provoked lots of debate. Some farmers have made claims of dramatic success that others have called unrealistic. There's no universally accepted measure of soil health, nor a clear definition of regenerative farming. Each of the farmers I met approaches it differently.

For Ficke, it's a spiritual quest. He recalls the moment, on a Sunday morning, when he heard a call from God to farm in a different way, one that felt closer to the native prairie that used to flourish in eastern Nebraska.

"I could feel it in my heart that we had to change. We are running out of time," he says.

The call to change involved a lot of things, but near the top of the list was protecting the soil. Farmers around the world have been mining that soil for centuries.

"It should be on the list of endangered species. Soil is endangered!" Ficke says.

For Ficke, protecting it means, first of all, no more tilling the ground, breaking it up with plows and discs. "Tillage is the most destructive thing in agriculture," he says.

That's not even controversial anymore. Many farmers have adopted "no-till" farming, recognizing its environmental benefits. But Ficke goes way beyond that. After he harvests his corn or soybeans, he plants something else on those fields right away — often a mixture of grasses and legumes like cowpeas. On some of that land, he keeps those "cover crops" growing right on through the next summer, instead of conventional crops like corn. His cattle graze on those fields the way bison once grazed on the prairie.

The roots of these cover crops, decaying in undisturbed soil, enrich the soil. So do manure and urine from his grazing cattle. With time, the soil grows darker, more fertile — chock-full of microbes and fungi.

None of this is a new discovery, exactly. But two things have changed. 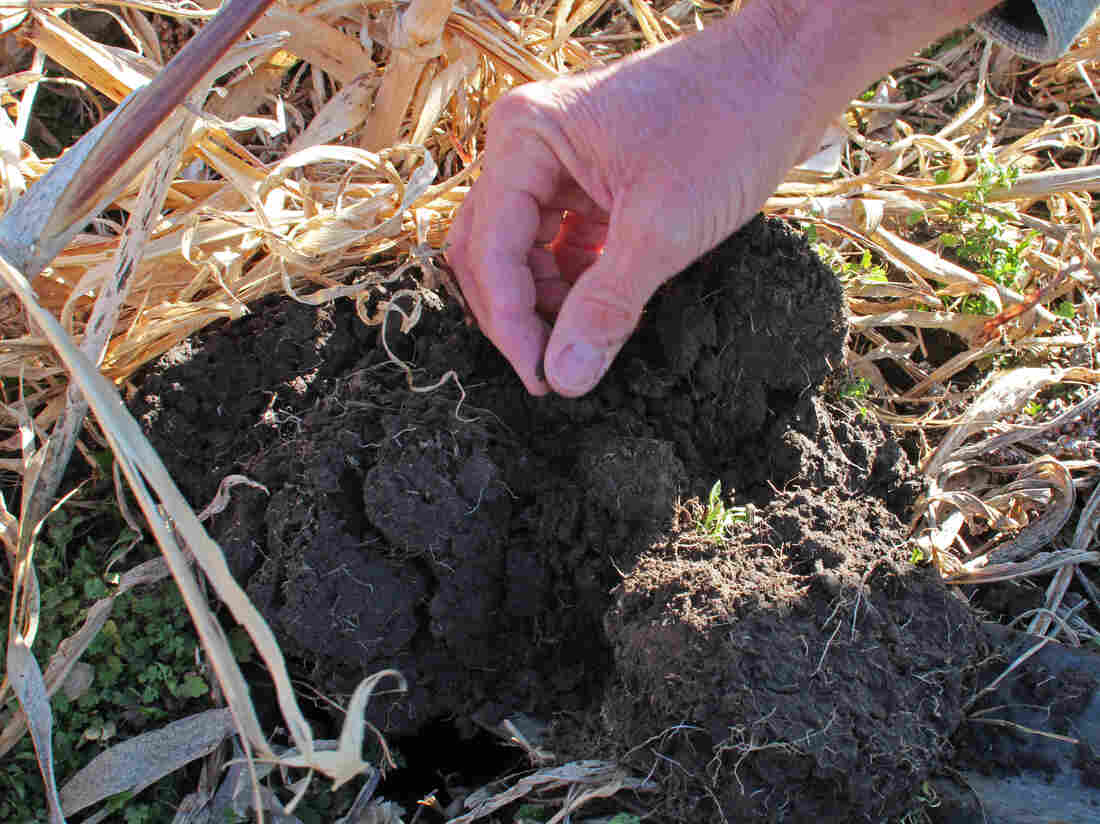 The carbon, or "organic matter" content of this soil on Del Ficke's farm has more than doubled since he changed his farming practices. Dan Charles hide caption 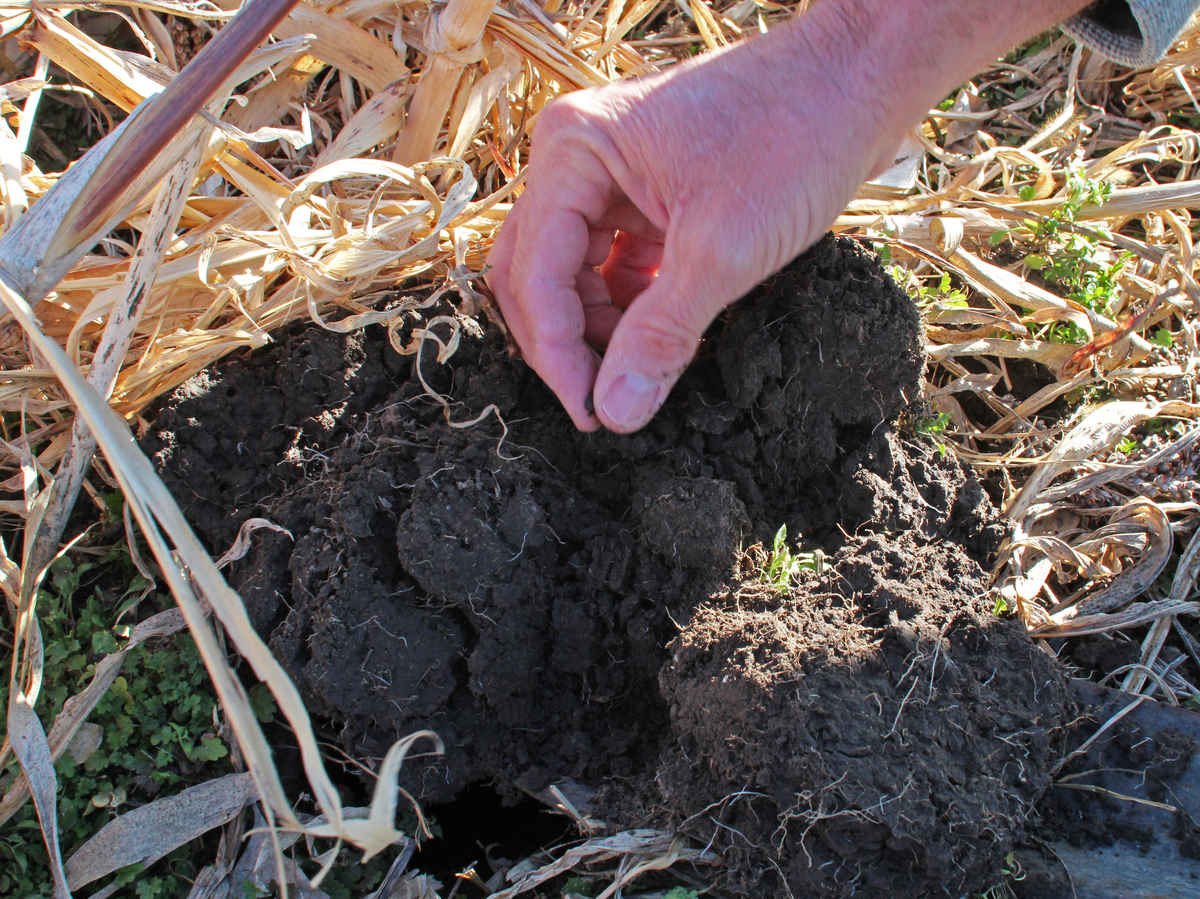 The carbon, or "organic matter" content of this soil on Del Ficke's farm has more than doubled since he changed his farming practices.

"When I started doing this stuff — really doing this stuff — five years ago, you had to go a state away to find people" farming in a similar way, Ficke says. Perhaps the most famous soil health pioneer is a farmer named Gabe Brown, in North Dakota. "Those people are all over now," Ficke says. "You can find someone like that every few miles."

"When we put that carbon back in the soil, we can see the effects of reduced fertilizer [use], reduced erosion," he says.

Soil that's full of decaying roots and microbes is like a sponge; it soaks up water and is better able to handle floods and droughts. It's also full of plant nutrients, so Irlbeck won't have to spend as much money on fertilizer.

"I think there is a movement, and I believe that farmers want to be part of that movement," he says. "It's just figuring out how to do it and stay economically viable." 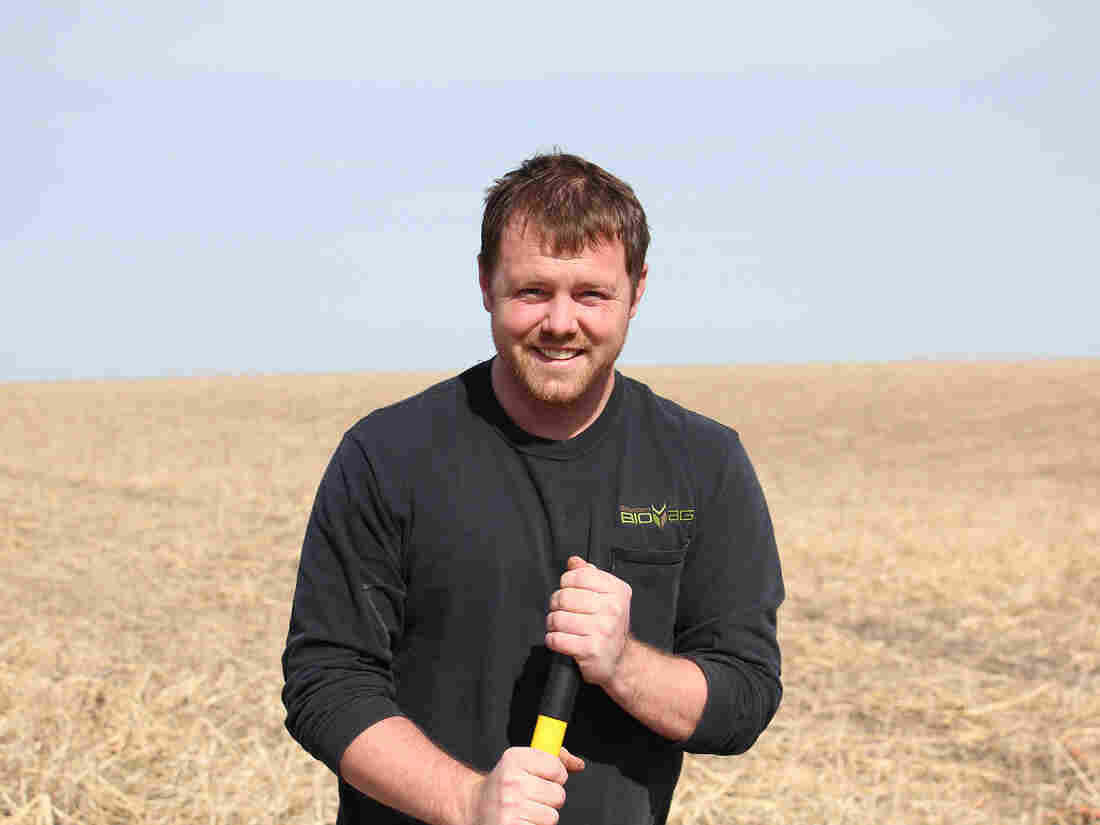 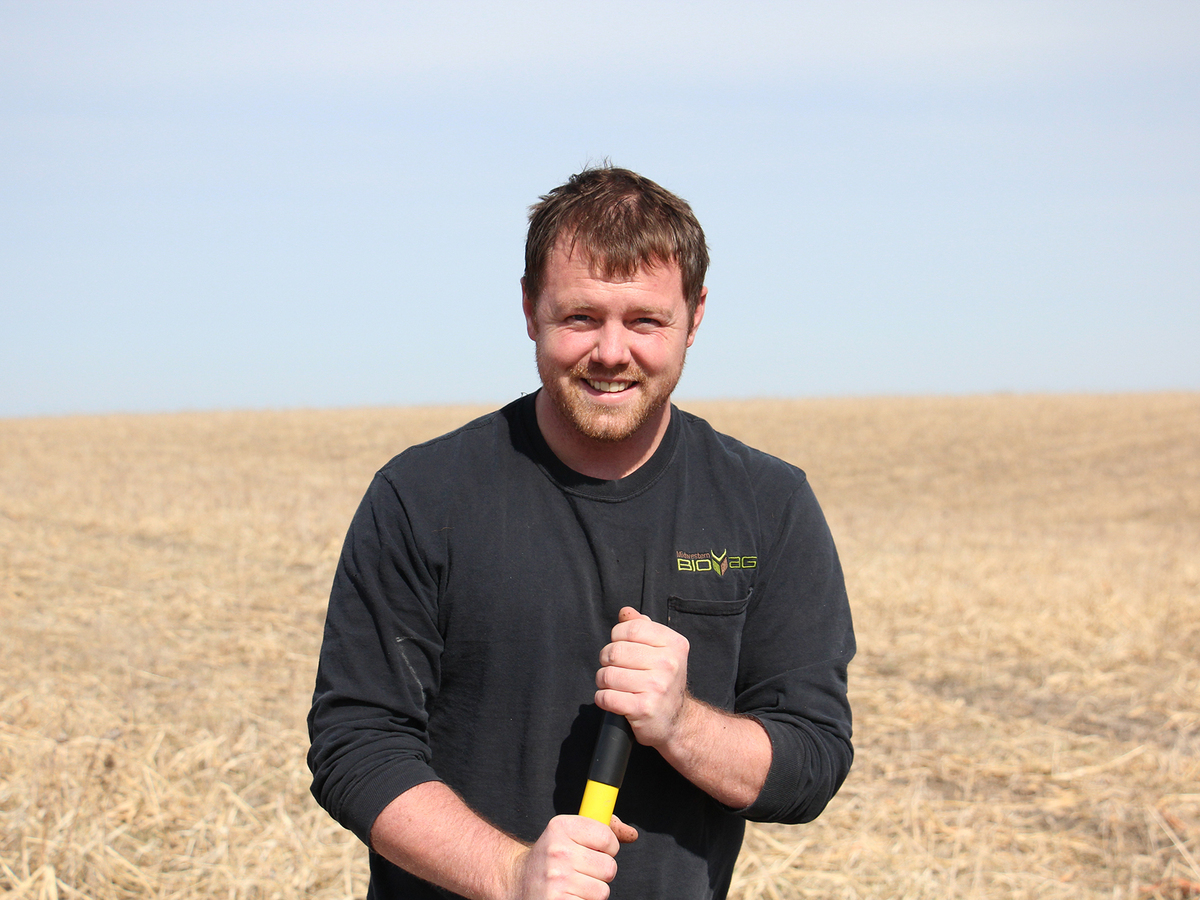 That's the catch. Planting those additional soil-building cover crops costs money up-front, Irlbeck says, and it takes years to see the benefits. This is the main reason why only 5 or 10 percent of farmers in Iowa are really doing it.

In fact, until recently, a lot of his neighbors thought he was a little crazy. Now, they're asking him lots of curious questions.

That's probably because of big change #2. Farmers are now hearing about the virtues of healthy soil from some of the biggest, most powerful names in American agriculture.

These include Monsanto, the seed and chemical company; food giants like General Mills and Walmart; also environmental organizations like the Union of Concerned Scientists and the Nature Conservancy. They're all talking about healthy soil as a way the farmers can help the environment.

It's driven in part by concern over global warming. Tilling and draining soil have released enormous amounts of carbon dioxide over the years. Regenerative farming puts some of that carbon back in the ground, slowing global warming.

A coalition of food companies and environmental organizations has set up a new organization, the Soil Health Partnership, which in turn has signed up a hundred participating farmers — including Deb Gangwish, co-owner of PG Farms in Shelton, Nebraska.

"We want to always strive to be better, and I want consumers, or folks who are removed from agriculture, to understand what we are doing, and how much we care, and [that] we're always striving to be more sustainable," Gangwish says. 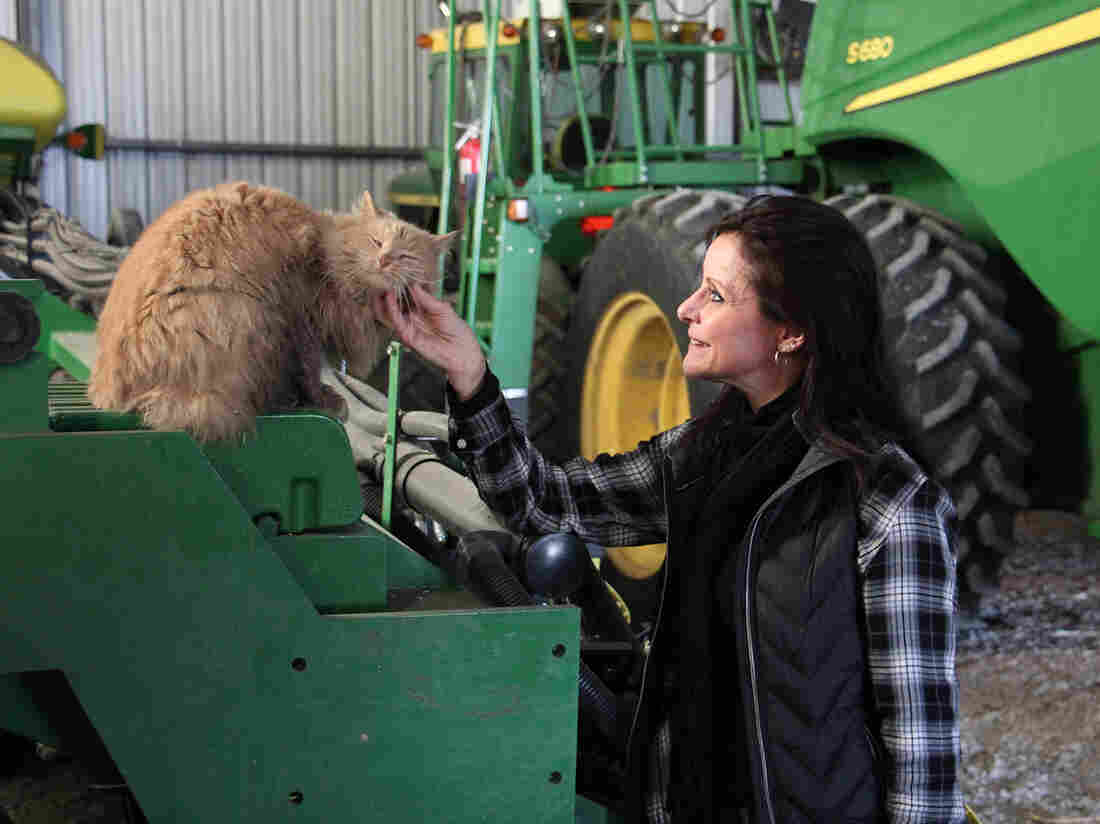 Deb Gangwish with Farley, a cat that once stowed away in a truckload of hay and made it all the way from Nebraska to Illinois and back. Dan Charles hide caption 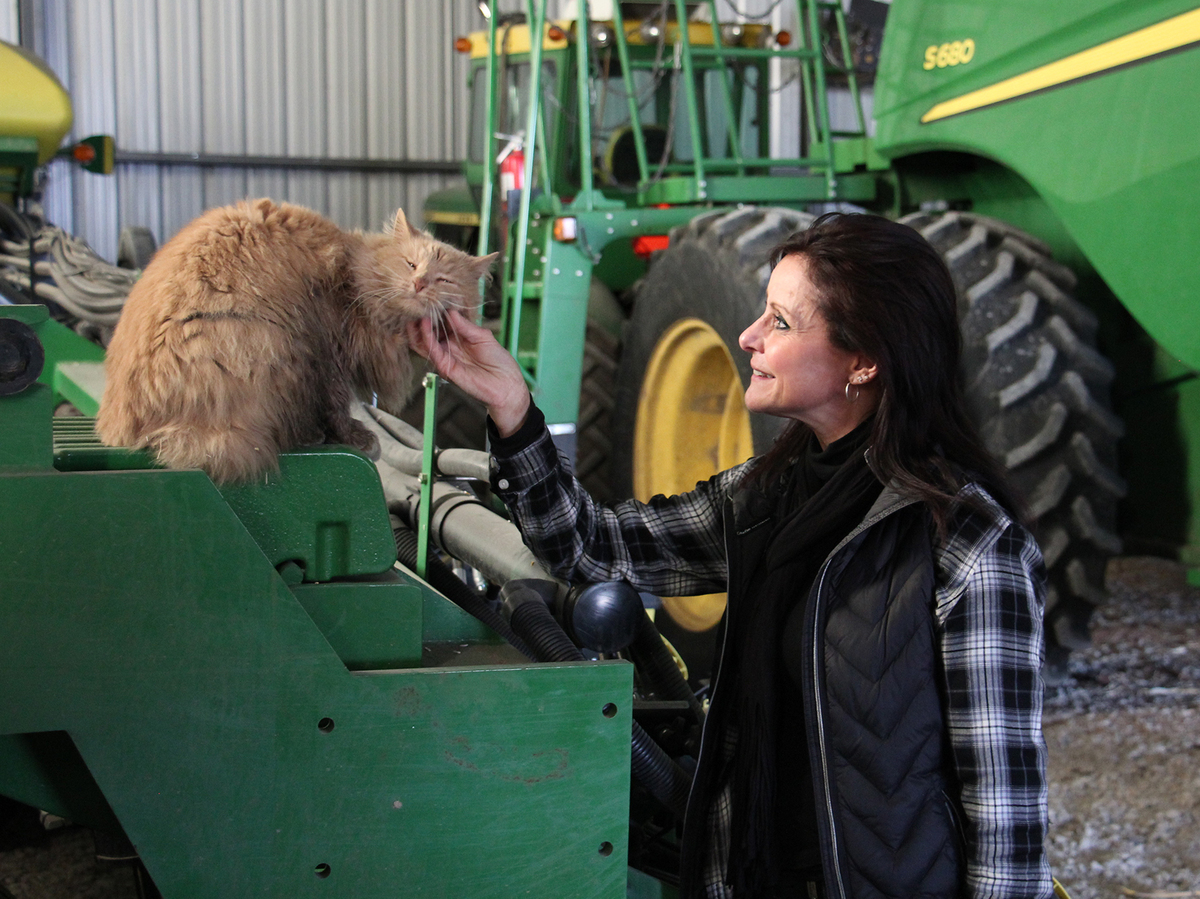 Deb Gangwish with Farley, a cat that once stowed away in a truckload of hay and made it all the way from Nebraska to Illinois and back.

This business-backed soil health organization, however, is promoting changes that are pretty modest. You could call it soil health lite.

It's carrying out experiments on these participating farms to measure the impact of farming without tillage, or growing cover crops in between regular plantings of corn and soybeans. The goal is to learn how those practices affect a farmer's profitability along with specific measures of soil health.

Del Ficke, the soil health pioneer, has mixed emotions about this partnership. He's in favor of anything that persuades more farmers to reduce tillage or plant cover crops, but he doesn't entirely trust the companies' new-found enthusiasm for soil health.

"Are they feeling it their heart? Is it a marketing deal? What is it?" he says.

There may, in fact, be a marketing angle to soil health. Some food companies have been talking about a new label for food that's grown using methods that improve the soil. On the supermarket shelf, it might take its place beside packages labeled as organic, non-GMO, or Fair Trade. This one might be called "regenerative."

Proponents of such a label say it could encourage farmers to join the movement, paying them to help the soil. But Matthew Dillon, director of agriculture for Clif Bar & Company, doesn't think it's a good idea, at least not yet.

There's a lot of uncertainty about what farming practices really are best for the soil in different regions, he says, so it's too soon to start using such labels. In an interview with the news site Food Navigator, Dillon said that the labels "may be "good for marketers, but they may not necessarily be good for consumers or for farmers if we're not all clear what the terms mean," he says.

An earlier version of this story stated that Gabe Brown's farm is in South Dakota. It actually is located in North Dakota.