Accessibility links
What Did The South Do To 'Arroz Con Pollo'? It's A Cheese-Covered Mystery : The Salt Arroz con pollo, or rice with chicken, is a dish beloved in much of Latin America. But in the South, it's morphed into ACP, a cheese-smothered phenomenon that built Mexican-restaurant empires.

What Did The South Do To 'Arroz Con Pollo'? It's A Cheese-Covered Mystery

What Did The South Do To 'Arroz Con Pollo'? It's A Cheese-Covered Mystery 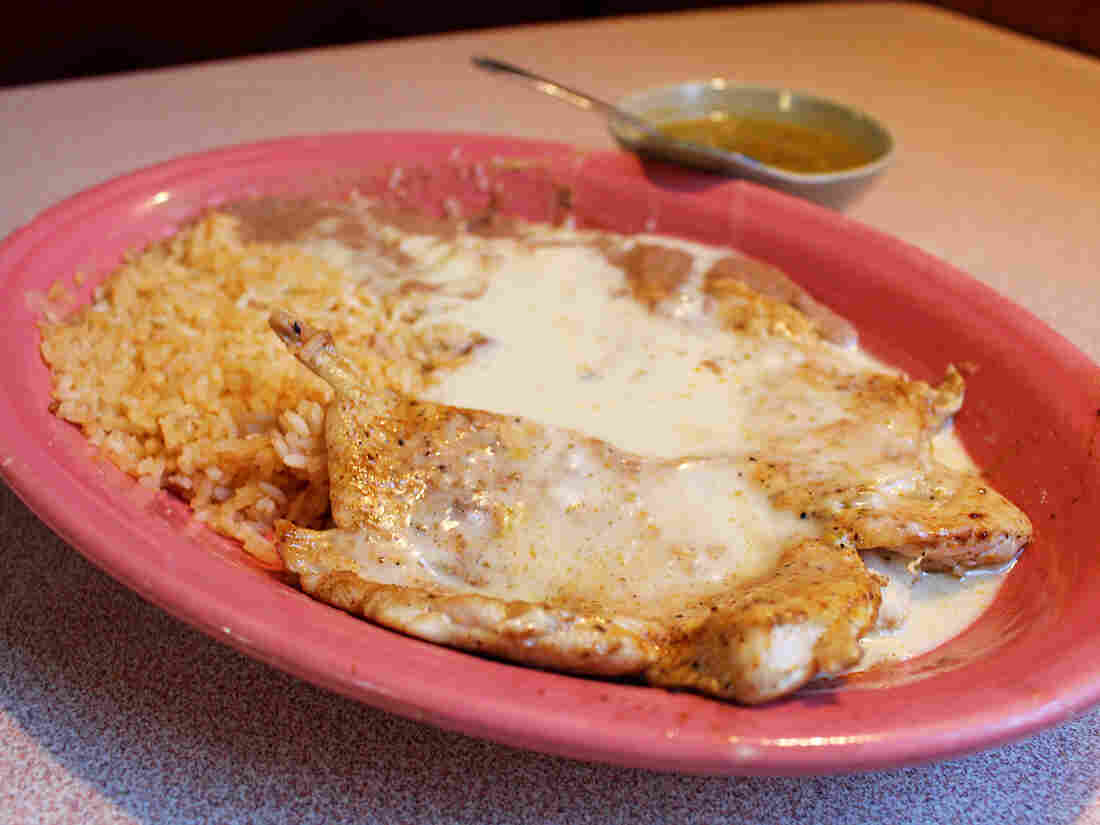 ACP at Cancun Restaurant in Crossville, Tenn. This cheese-covered Southern interpretation of arroz con pollo is not the saffron-colored rice and golden chicken that many Latinos who grew up eating the dish would recognize. But ACP nonetheless helped build Mexican restaurant empires across the South. Gustavo Arellano hide caption 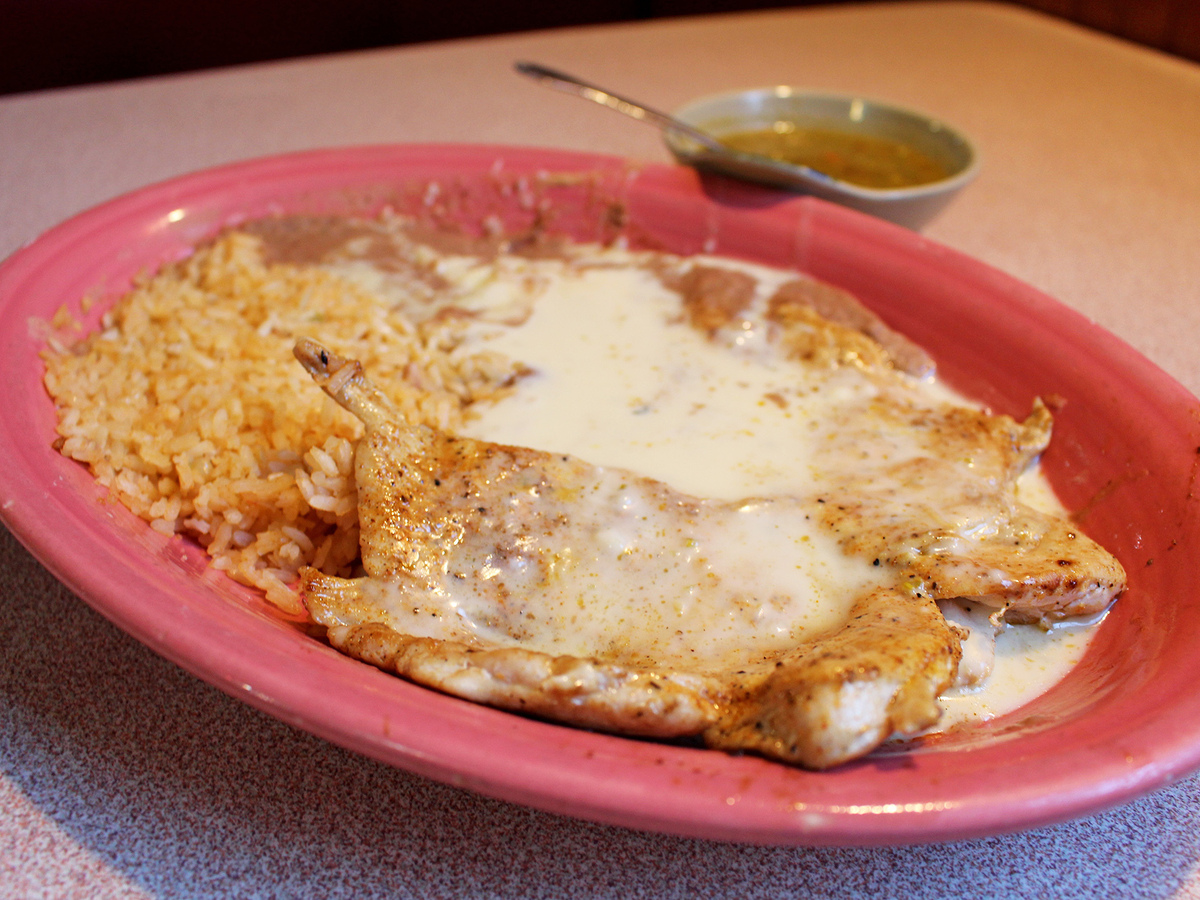 ACP at Cancun Restaurant in Crossville, Tenn. This cheese-covered Southern interpretation of arroz con pollo is not the saffron-colored rice and golden chicken that many Latinos who grew up eating the dish would recognize. But ACP nonetheless helped build Mexican restaurant empires across the South.

Alongside tamales and maybe empanadas, arroz con pollo is one of the most beloved dishes in Latin America. Every country has a version of this one-pot meal that finds chicken cooked on a bed of seasoned rice. The Latino consensus is that Caribbeans prepare it best, and it's a tossup between Cuba and Puerto Rico over who makes it best. (I especially enjoy how Dominicans do it because I can spike it with the nation's electric mojo de ajo).

Arroz con pollo is an afterthought in Mexican cuisine, however. We do love chicken and rice, but rice is almost always a side, and we prefer chicken in tacos, in soups, inside enchiladas, or topped with mole. Few Mexican restaurants in the United States carry arroz con pollo, except in the American South. There, the dish is commonly known as ACP and has morphed into a regional phenomenon.

But this Southern interpretation of arroz con pollo is not the feast of saffron-colored rice and luscious, golden chicken that many Latinos who grew up eating the dish would recognize. Instead, the South's version consists of bland "Spanish" rice mixed with grilled chicken breast, all smothered in a cheese sauce with a consistency between queso and melted pudding. Some restaurants gussy it up with beef, chorizo, shrimp, or a combination of all three, but ACP is the No. 9 hitter in the arroz con pollo lineup.

I only became aware of ACP last spring after a challenge from John T. Edge, director of the Southern Foodways Alliance (SFA) – I write a column for its quarterly journal, Gravy. He asked me to find a Mexican dish unique to the South, and tell its history at the SFA's annual fall symposium in Oxford, Miss. (The theme: "El Sur Latino.") I stumbled upon ACP after reading dozens of menus from Mexican restaurants across the South and wondering why that three-letter acronym — which I had never previously seen in a Mexican restaurant elsewhere — kept popping up.

I finally tasted the dish last August, during the annual vacation my wife and I take to Kentucky's Bourbon Trail. We stopped at Cancun Mexican Restaurant in Crossville, Tenn., because there's a great liquor store just up the road that specializes in Southern whiskeys. Cancun makes good fajitas and a potent Cadillac margarita. Its ACP, however, was bland, which I discovered is its default taste.

The flavor betrays its pedigree. I discovered in my research that ACP, which most likely originated at the Mexican Inn in Fort Worth, Texas, but never became part of the Tex-Mex canon, is the key to one of the greatest unofficial American restaurant chains ever built. Since the 1980s, residents of San José de la Paz, a village in the Mexican state of Jalisco of about a thousand people, have opened hundreds of Mexican restaurants across the South that cater to Anglo diners. In 1999, the Dallas Morning News estimated about 540 U.S. eateries traced back to the village, and the number is bigger now.

Families and friends from San José de la Paz created mini-empires, partitioning the South among themselves, then setting off to conquer palates at a time when few Mexicans lived in the region. In Louisville, Ky., Jesús Leon opened up the El Caporal chain; in Nashville, the king is Jose Luis Ayala, who runs nine Las Palmas in the city. The pioneer in the Roanoke, Va., area was Jesus Arellano. And in Atlanta, the Macias clan used to run more than 20 El Toros before changing tastes in the city forced most to close earlier this decade.

They all worked off a master menu, so that restaurants from Arkansas to Maryland used the same numbers and names for combo plates (and even featured the same misspellings). These restaurants all carried ACP, whose comfort-food combo quickly proved popular with Southerners — even if few of the restaurateurs themselves cared for it.

"My dad didn't know what ACP was when he started," says Charlie Ibarra, whose family hails from a Mexican town about an hour away from San José de La Paz and opened the El Rodeo and La Rancherita restaurants in the Raleigh-Durham area of North Carolina. Ibarra owns José and Sons, in Raleigh's downtown, which fuses Southern and Mexican cooking traditions — think collard green tamales, or chicharrones and waffles. "I don't think he's ever even tasted it. But we sold it. It paid the bills." 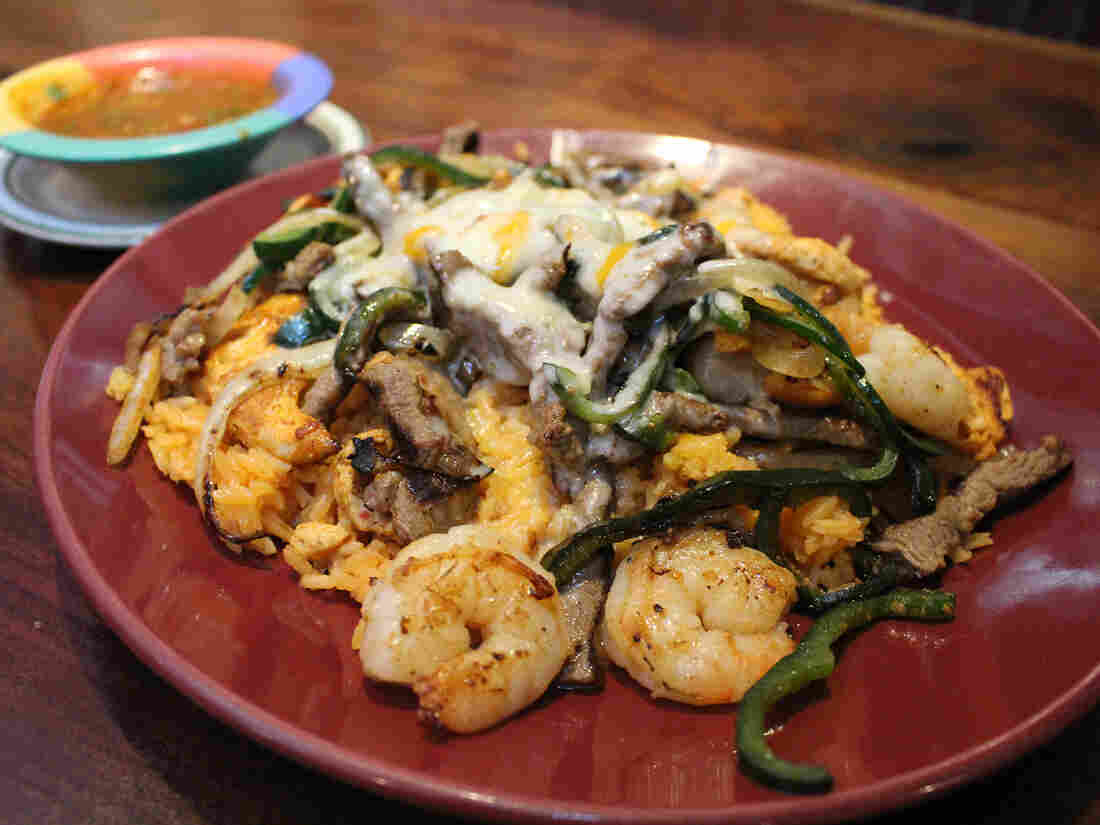 The ACP dish at La Rancherita in Raleigh, N.C., is delicious, because it uses cheese from Chihuahua, which is milkier and doesn't melt as much. Charlie Ibarra, a restaurateur whose family owns the La Rancherita restaurants, says his father didn't know what ACP was when he started out. "But we sold it. It paid the bills." Gustavo Arellano hide caption 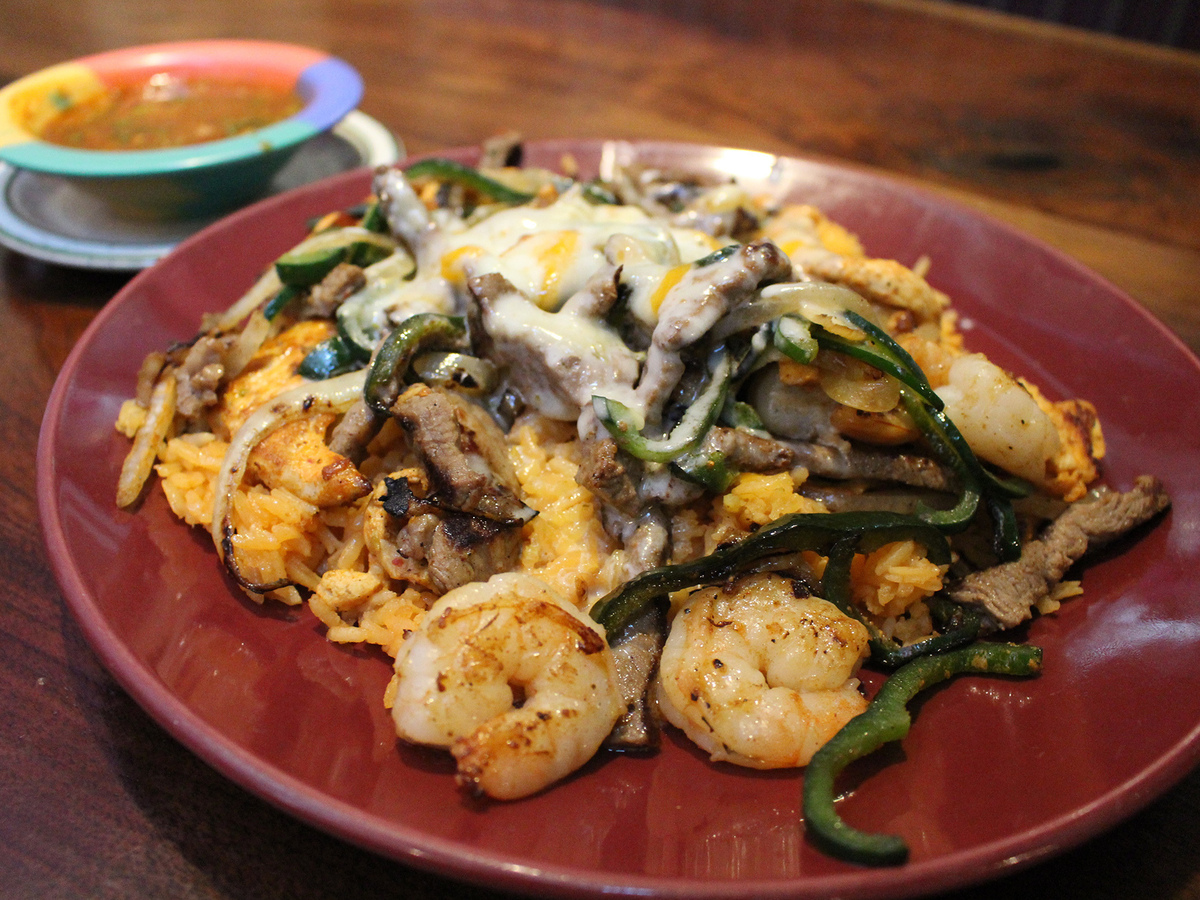 The ACP dish at La Rancherita in Raleigh, N.C., is delicious, because it uses cheese from Chihuahua, which is milkier and doesn't melt as much. Charlie Ibarra, a restaurateur whose family owns the La Rancherita restaurants, says his father didn't know what ACP was when he started out. "But we sold it. It paid the bills."

We are now in an age where crafty restaurateurs take American regional foods and spread them far from their origins, knowing that consumers want the formerly provincial to be just an Uber Eats away. The most famous example is Chipotle, which took the burrito style of San Francisco's Mission District — humongous, made to custom order, created in an assembly-line setting in front of the customer, then wrapped in foil — and built a multibillion-dollar company.

Even unlikelier dishes have flourished. Young Vietnamese-American entrepreneurs fell in love with the Halal Guys food cart in Manhattan, and now franchise it around the world. I have seen candy shops in Oregon sell Tasty Kakes from Philadelphia, hipster burger joints in California serve the North Carolina soda Cheerwine, and even a restaurant in Orange County, Calif., that specializes in kolaches, a Czech pastry popular in Texas.

The South, in particular, has become a favored place to mine. Bourbon sales continue to soar, Viet-Cajun crawfish houses from Houston keep spreading, while Nashville hot chicken — fried drumsticks and breasts rubbed with cayenne sauce — has become so popular that even KFC sells it.

But ACP is unlikely to ever become the hip new trend. There is no romance or nostalgia to it, and no real culinary redeeming value. It's not Southern enough or Mexican enough for the rest of the country, or even for the South itself. No Southern chefs champion it; food writers opt to cover Mexican food favored by immigrants and foodies instead of the working-class whites who seem to make up ACP's biggest fans. In my research for SFA, restaurateur after restaurateur told me they're only people who ever order ACP. Typical was the experience of Marcos Medina, a Mexican immigrant who owns Villa del Mar in Greensboro, N.C. "Only the americanos order it," he told me. "They devour it."

In my experience, Latinos who live in the South tend to look askance at ACP, if they even know about it. None of my friends in el Sur had ever heard of the dish when I started my research, because they patronized taquerías and other Mexican restaurants geared toward immigrants. When I presented my PowerPoint on the subject at the SFA's symposium, a half-Mexican food writer from Atlanta proclaimed in front of a hushed crowd that I had insulted the South's Latino community by tying them to such a base dish. While I interviewed Ibarra, he showed me a text from an older brother who was bewildered that I wanted to talk to his family about ACP, of all things. (La Rancherita's take is delicious, because it uses cheese from Chihuahua, which is milkier and doesn't melt as much.) "He doesn't sound like a cool reporter," the text read.

"ACP is the sort of totemic dish Southerners squelch instead of trumpet," says Edge, whose recent book, The Potlikker Papers: A Food History of the Modern South, chronicles how the region became such a hotbed of American cookery. "It's an honest reflection of who we are right now, but it doesn't reflect the reigning stereotypes."

When I asked him why he thinks ACP won't become popular nationwide, Edge offered, "The hint of a story piques interest and appetite." The epic of the South's arroz con pollo rivals any. But since it's a tale of adaptation, assimilation and not of authenticity (a loaded word in food circles), ACP is condemned to its curious life: a moneymaker that no one in the food world wants to claim as their own.