Accessibility links
Brown Spirits Like Bourbon Face Boom And Bust Cycle : The Salt While there has been sustained interest in bourbon in the past several years, some craft distillers are preparing in case of a bust by investing in rum and other spirits. 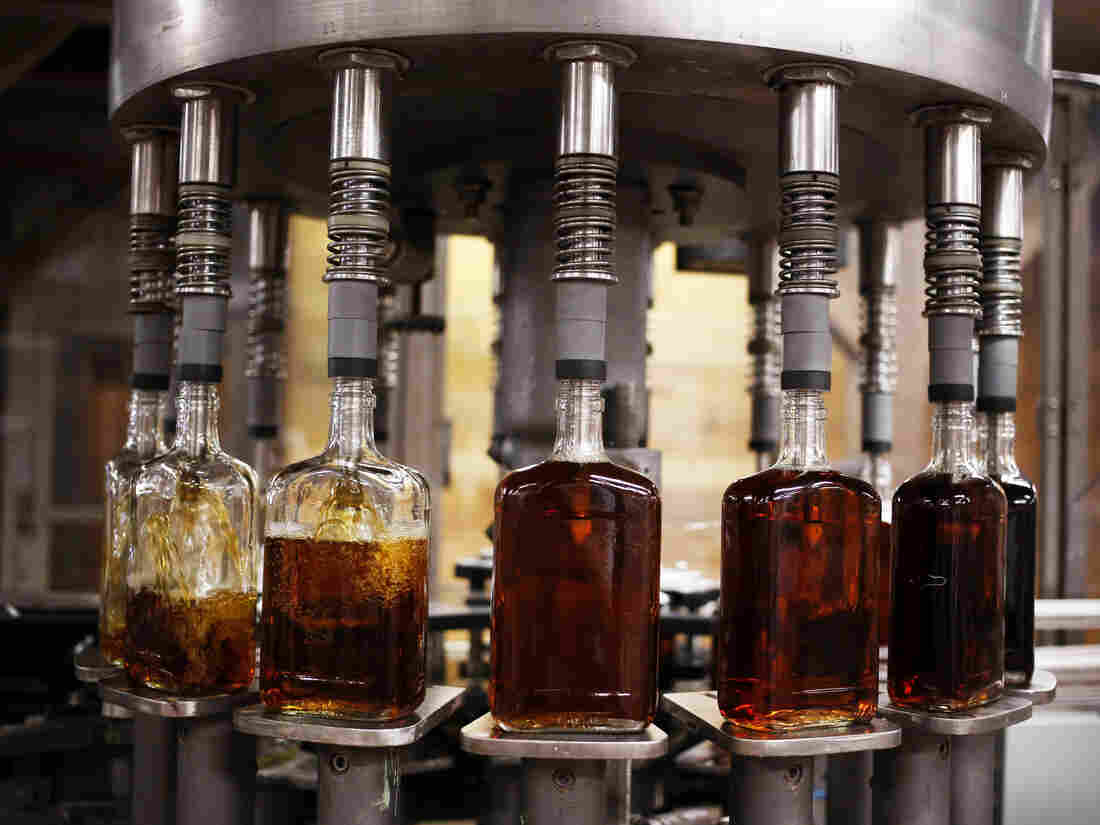 Bottles of single barrel bourbon are filled on the bottling line at a distillery in Kentucky, the center of the bourbon universe. But some distillers are looking to other spirits, too. Luke Sharrett/Getty Images/Bloomberg Creative hide caption 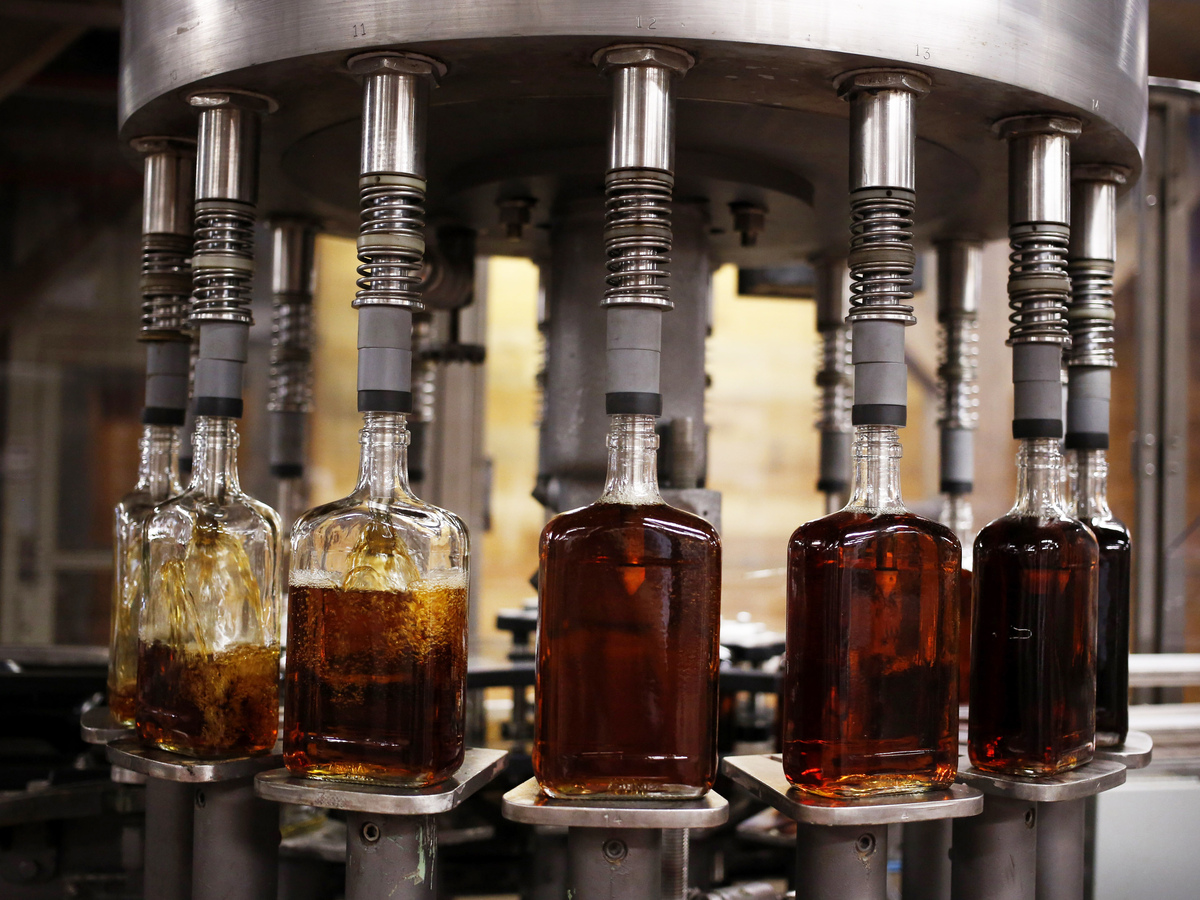 Bottles of single barrel bourbon are filled on the bottling line at a distillery in Kentucky, the center of the bourbon universe. But some distillers are looking to other spirits, too.

Craft bourbon distillers have been growing for the past several years as drinkers rediscover heritage and new styles of brown liquor drinks. Some might call it a boom. But many distillers have seen the boom-and-bust cycle of liquor popularity before and are exploring ways to hedge their bets against another bust.

"These are the two small stills I started with," he says, gesturing across the concrete slab floor. "These are 26 gallons apiece."

For reference, most of the big pot stills you see on distillery tours hold 500 to 1,000 gallons. Buchanan, Hartfield's founder, has one of those — but it hasn't been used yet.

"It got delivered in January, and literally we're days away from running it right now," Buchanan says. "This one will run kinda day in and day out with bourbon."

Since the distillery's opening in 2014, bourbon has been Hartfield & Co.'s signature spirit. "So we are the first distillery actually in Bourbon County since 1919," he says. "It's crazy that no one was actually making bourbon here" for so long.

Buchanan got into bourbon at a good time, as the industry is in the midst of what spirits professionals are calling a "bourbon boom."

"We're definitely on an upward trajectory," says Maggie Kimberl, a whiskey writer and historian. "There are a lot of people who have opinions about whether we're at the bottom of the upward trajectory, the middle, the top — but most people feel like we're somewhere in the middle."

But with booms come busts, and the bourbon industry is historically cyclical.

The first big bust was during Prohibition. "There was a city called Tyrone, Ky., which is near Wild Turkey, that was basically wiped off the map by Prohibition," Kimberl says. "It was a very small town that had two or three, maybe four bourbon distilleries in it, and when Prohibition came about, that town ceased to exist."

Then American whiskey boomed again between 1945 and about 1970.

After that, "people were starting to turn to wine, beer and clear spirits," Kimberl says. "Bourbon was not especially popular at that time."

Then in about 2000, bourbon distilleries started seeing renewed interest in their products. In 2016, bourbon and American whiskey sales topped $3 billion.

"But there are always people saying this can't last, it's going to end soon, the bubble's going to burst," Kimberl says.

That's especially the case lately, as national media have started turning their focus to other spirits. For the past few years, outlets — ranging from Forbes to Liquor.com — have been predicting the "rise of rum." 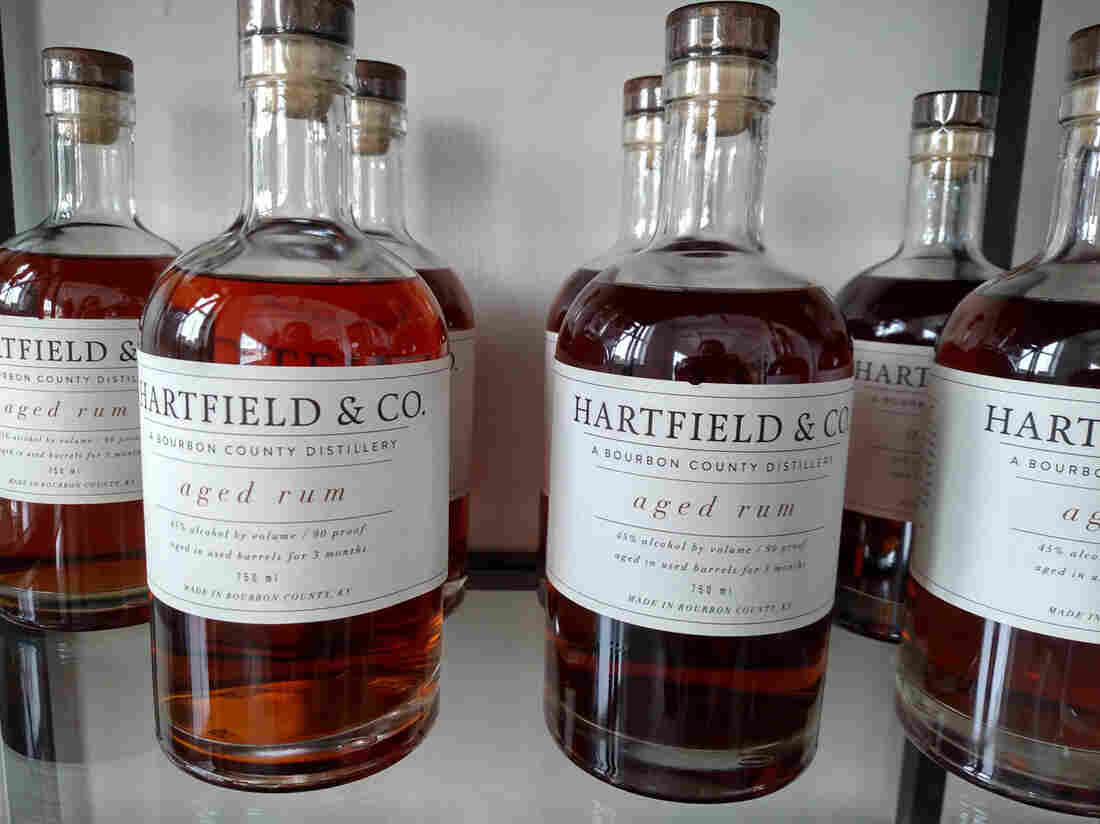 Some bourbon distillers are diversifying into other spirits like rum. Ashlie Stevens hide caption 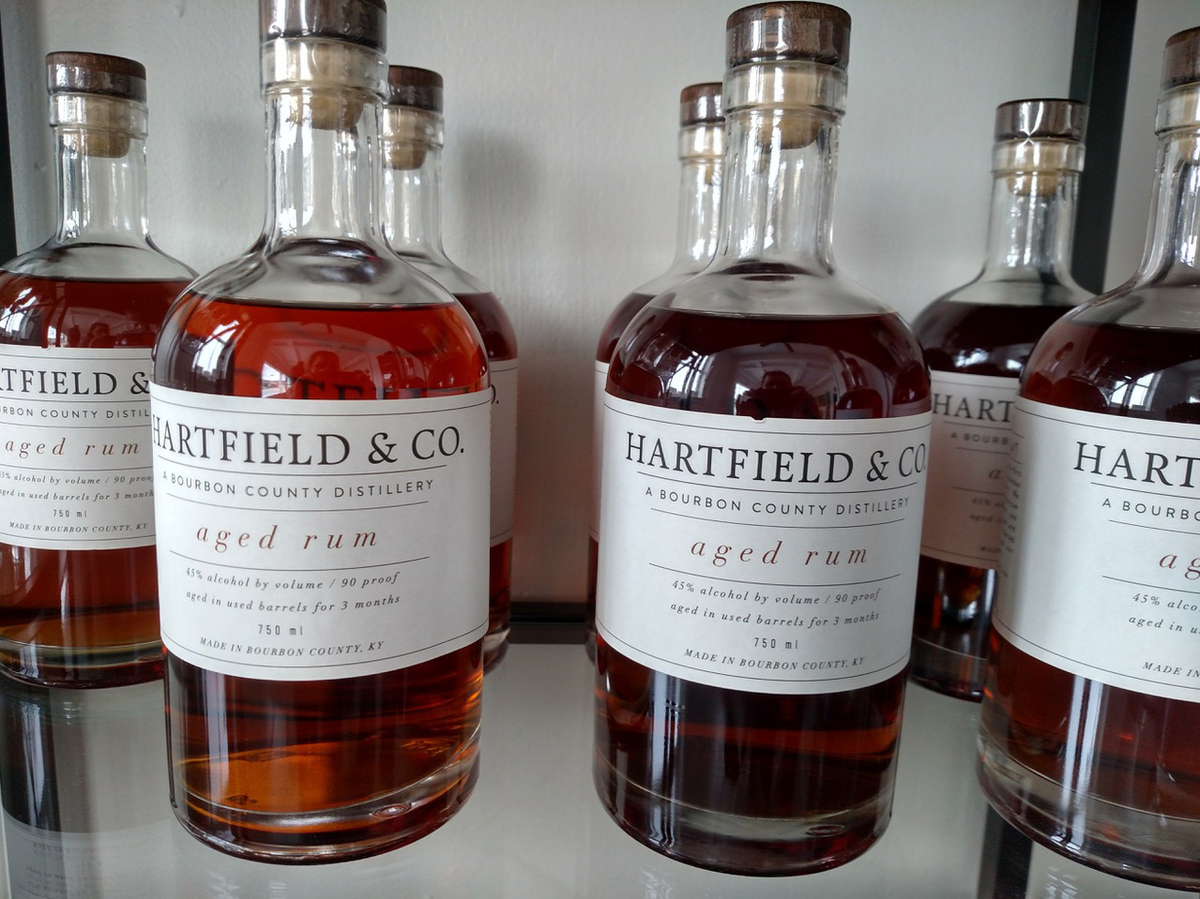 Some bourbon distillers are diversifying into other spirits like rum.

Kimberl says this alone isn't an indicator that people are going to put down their bourbon bottles.

"It does bear out a little bit in consumer spending, I think," she says. "But it's not something where somebody is going to say bourbon is out and rum is in and the bourbon industry's [bottom is] going to fall out."

Hartfield's Buchanan points out that many of the big beverage conglomerates are set up to weather changes in consumer tastes. "They all own a rum, or several rums; they all own bourbon, or several bourbons — Scotch, tequila, vodkas, all of these things," he says. So they're not worried about the next thing. "They have the next thing."

He says the small distillers can take a lesson from this.

And that's where those two small stills — the 26-gallon ones — at Hartfield & Co. come in.

The distillery will use those to make a few different spirits — rum, an agave-based spirit, and a single-malt whiskey. This isn't unusual for other craft distillers, especially since bourbon has a multiyear aging process.

Castle & Key, another new craft distillery in Versailles, Ky., is in the midst of developing a gin and vodka while its bourbon is barreled.

Still, Buchanan acknowledges that the bulk of his company's profit will always be bourbon; it is based in Bourbon County, after all. Buying rum from there is a harder sell. So Hartfield & Co. needs an additional safety net in the event of a bust.

And that may come in the form of exports.

Bourbon consumption in Europe and Great Britain is up too, she says.

"In the worldwide market, Scotch has always been the 800-pound gorilla, and now bourbon is starting to take off in some places," Kimberl says. "So there's been this feeling historically that even if the bust happens in America, there is going to be a market outside of America for bourbon."

However, the recent threats over trade wars with China are throwing a little more uncertainty on the picture.

Buchanan says he has been working with the Liquor Control Board of Ontario and just submitted a proposal to a buying group for Sweden, Norway and Finland. But for now, he is going to enjoy his special place in the bourbon boom stateside.

"And honestly, any anxiety I feel about the future, it really just makes me want to work even harder on our products," Buchanan says.